Stanford’s Alex Bowen and the U.S. men’s water polo team try to bounce back from three straight losses to stay alive in the elimination bracket, and American track superstars Sydney McLaughlin and Dalilah Muhammad go head to head in the 400m hurdles. Here’s the top events of the day to view:

The U.S. men’s water polo team will need to turn the tide to keep its medal hopes alive.

Losers of three straight, Team USA is back in the quarterfinals after missing the round at the Rio Olympics. The Americans will play Spain at 10 p.m. Tuesday.

Head coach Dejan Udovicic’s squad won its first two games in Tokyo, edging Japan 15-13 in the opener and cruising past South Africa 20-3. Those two wins gave the U.S. enough to advance, as the team followed it up with consecutive defeats against Italy, Hungary and Greece to finish out group play.

Alex Obert, Stanford’s Alex Bowen and Max Irving have been among the offensive contributors for the U.S. The team will need all the offense it can get against an undefeated Spain team that has allowed a tournament-low 31 goals. 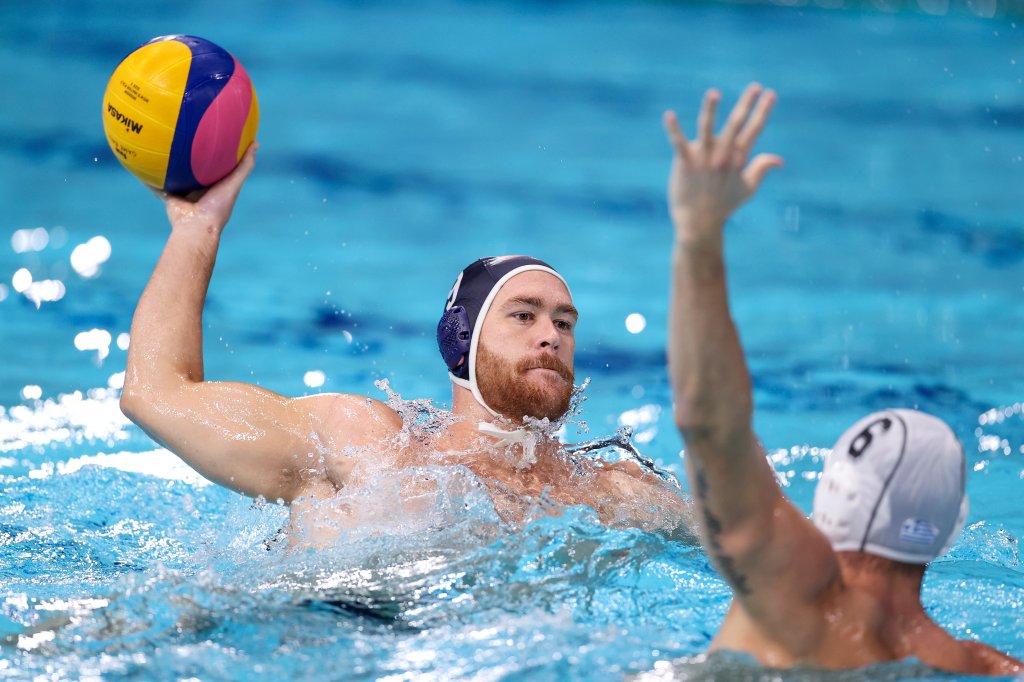 Alex Bowen of Team United States is blocked by Alexandros Papanastasiou of Team Greece during the Men’s Preliminary Round Group A match between Greece and the United States on day ten of the Tokyo 2020 Olympic Games at Tatsumi Water Polo Centre on Aug. 2, 2021, in Tokyo, Japan.

American superstars Sydney McLaughlin and Dalilah Muhammad will square off in the women’s 400m hurdles final. McLaughlin came into Tokyo with the world record in the event, while Muhammad won the event at the 2016 Rio Olympics.

The two have not disappointed so far in Tokyo, either. McLaughlin posted the best semifinal time in the event on Tuesday with a 53.03 mark. Muhammad won her heat with the second-best overall time of 53:30.

Fellow American Anna Cockrell will also be racing in the final after placing second in the third semifinal heat on Tuesday. Still, all eyes will be on the contest between the world record holder and the defending Olympic champion. The race is set to start at 7:30 p.m. Tuesday.

Track and field turns around and has another session beginning at 2:30 a.m. Wednesday. There will be finals in the women’s steeplechase, men’s hammer throw, men’s 800m and men’s 200m. On top of that, there will be action in the men’s decathlon, women’s heptathlon, women’s 1500m and women’s 400m. 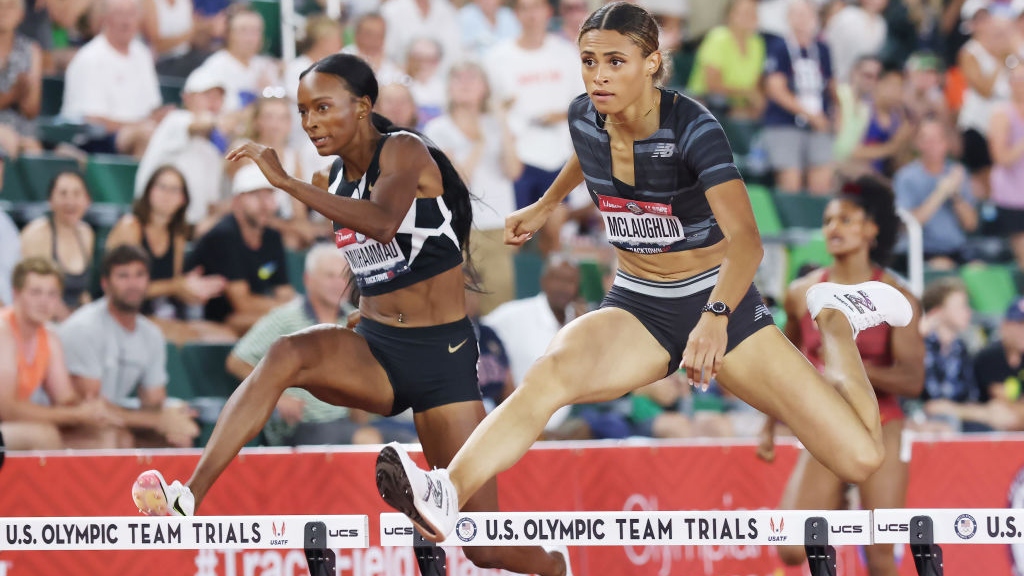 Team USA tips off against Australia in women’s basketball quarterfinals

The U.S. women’s basketball has won 52 straight Olympic contests dating back to 1992. Now, the squad stands three more victories away from a seventh straight gold medal.

Team USA went 3-0 in the group stage by beating Nigeria, Japan and France. A’ja Wilson has been the leading scorer with over 20 points per game in her Olympic debut, while Breanna Stewart is averaging a double-double through three contests.

The Americans turn their attention to Australia, which entered the Olympics with the second-best odds at winning the tournament. Tipoff is at 9:40 p.m. Tuesday.

Without Liz Cambage, Australia lost its first two games to Belgium and China before picking up a 27-point win over Puerto Rico to qualify for the quarterfinals. The U.S. will not take the matchup lightly, though, after losing to Australia by a score of 70-67 in an exhibition on July 16.

Watch the game on USA Network, or stream live. 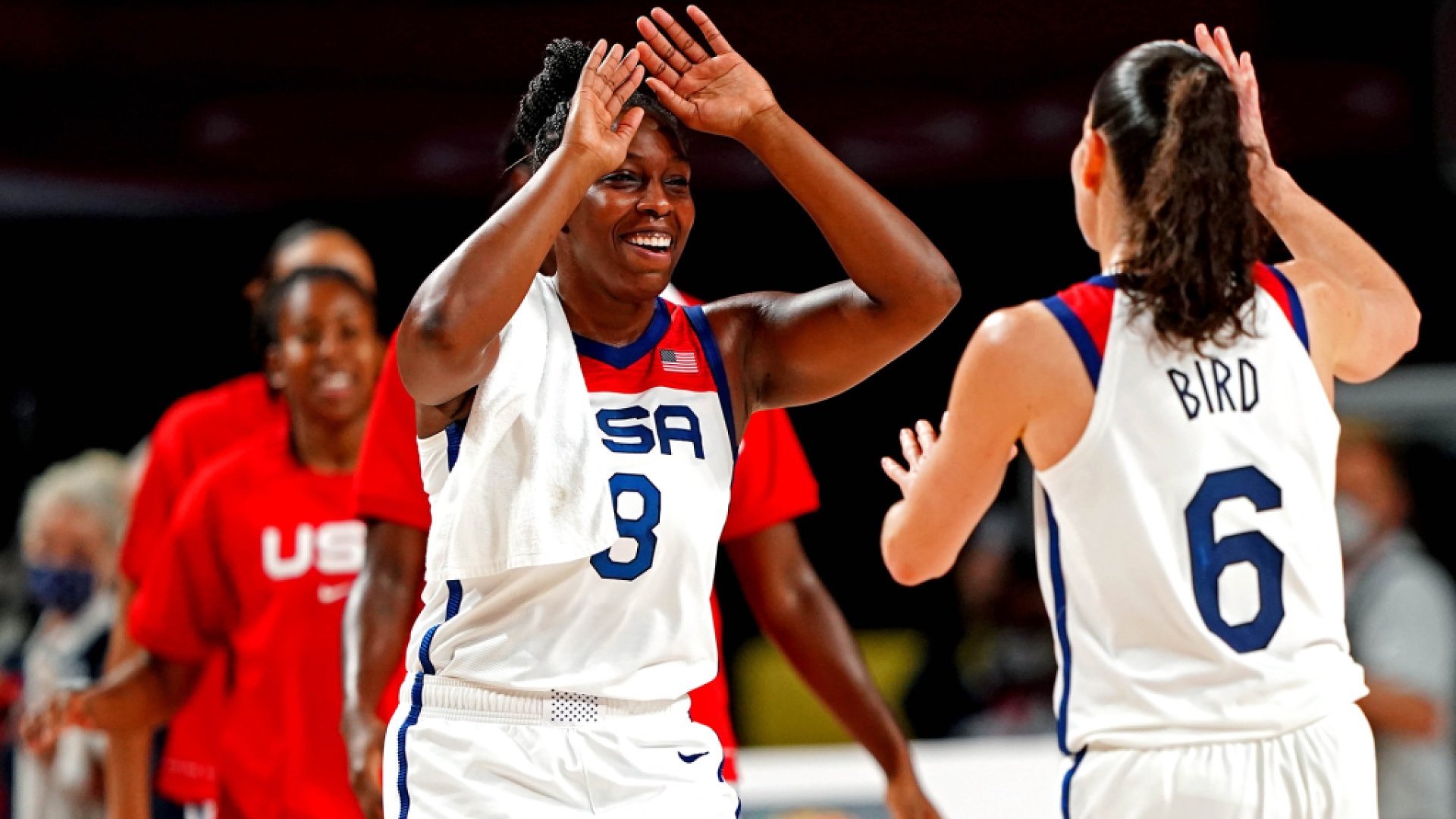 The U.S. women’s volleyball team faced adversity throughout the preliminary round, and the road doesn’t get any easier going into the quarterfinals.

Team USA went 4-1 in round-robin action while dealing with apparent ankle injuries to two marquee players in Jordan Thompson and Jordyn Poulter. The first-place finish in Pool B earned the team a quarterfinal tilt against the Dominican Republic at 9 p.m. Tuesday.

Thompson’s availability for Wednesday’s quarterfinal match is uncertain, though the team is hopeful she can return at some point in the elimination rounds. Poulter, meanwhile, exited Sunday’s comeback win over Italy and watched the remainder of the game from a wheelchair.

The Dominican Republic lost its first three matches in Tokyo but turned things around with wins over Kenya and Japan to secure a quarterfinals berth. 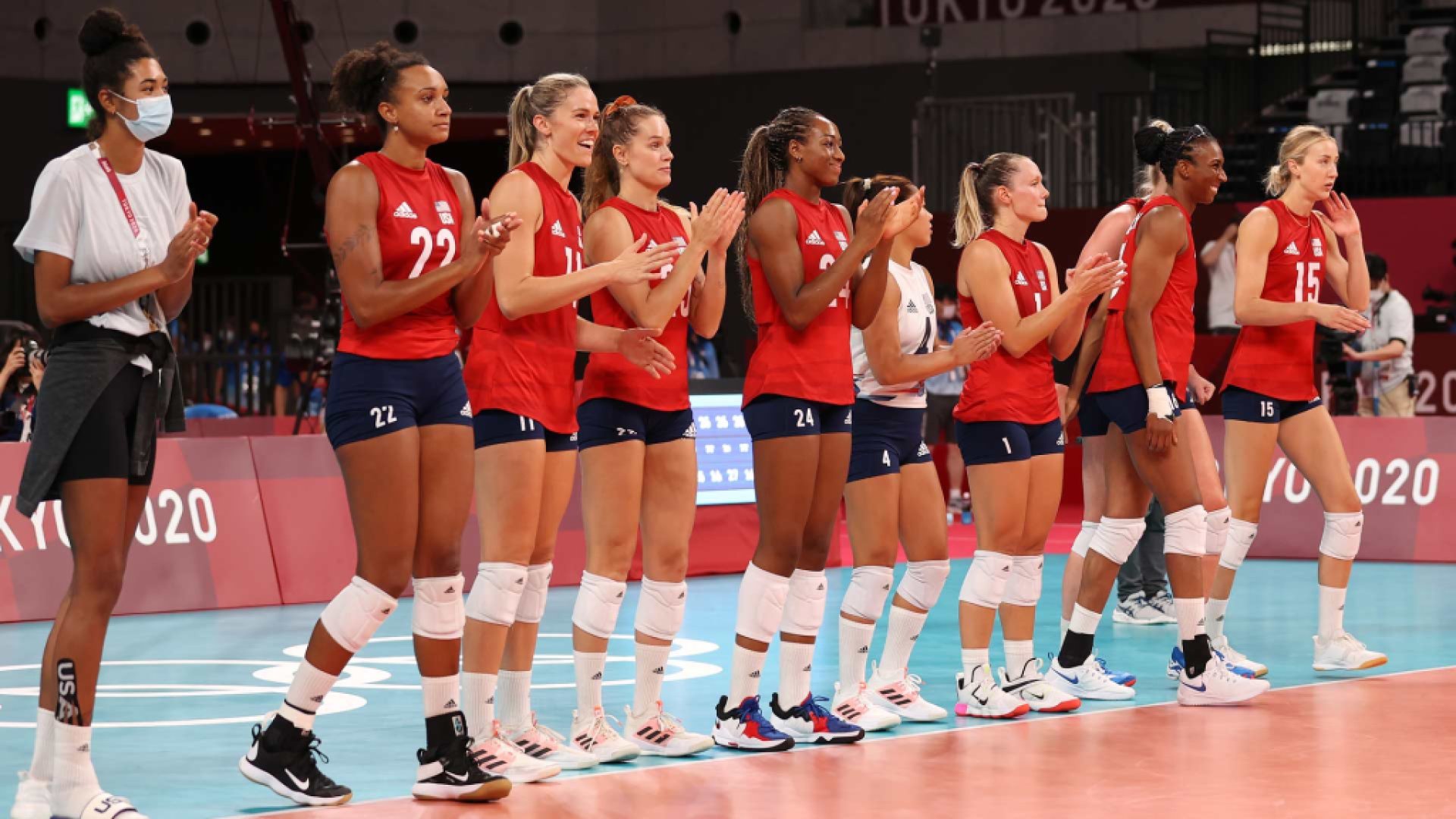 Japan is poised to win its third straight gold to kick off the inaugural Olympic skateboarding competition.

After winning gold in the men’s and women’s street events last week, the host nation enters the women’s park final with a pair of medal favorites. Okamoto Misugu, 15, was well ahead of the competition in 2020, winning the X Games, Dew Tour and world titles that year.

The year delay for the Tokyo Olympics gave time for the competition to catch up. Japan’s Yosozumi Sakura and Great Britain’s Sky Brown are capable of doing the 540, the signature trick that could determine who wins gold in Tokyo. Japan’s final participant is 13-year-old Hiraki Kokona, who will be the nation’s youngest Olympian ever.

Jordyn Barratt, Bryce Wettstein and Brighton Zeuner will represent the U.S. in the event. Barrett’s best career finish was second place at the 2017 X Games, Wettstein’s was sixth place at the 2019 X Games and Zuener’s came with a pair of X Games wins in 2017 and 2018. 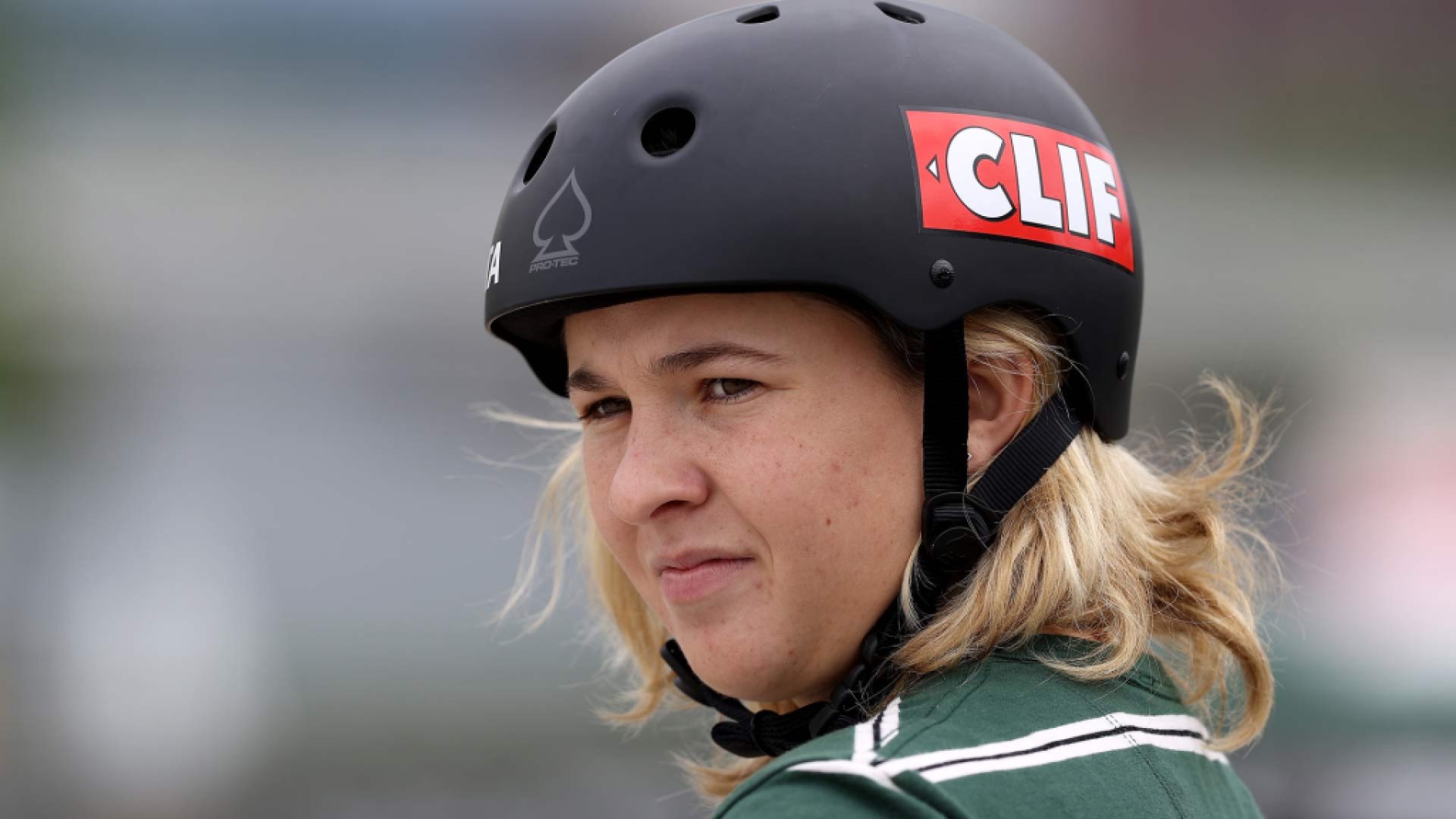 Jordyn Barratt looks on during the Women’s Park Open qualifier at the 2021 Dew Tour in Des Moines, Iowa.