Stanford’s Alix Klineman and her partner April Ross are unbeaten heading into the gold medal match Thursday evening, and Allyson Felix headlines a busy day in track and field, along with the men’s and women’s 4x100m relays. Here’s what’s on tap in the next 24 hours at the Tokyo Olympics:

The United States’ top women’s beach volleyball pair took down Australia’s Mariafe Artacho del Solar and Taliqua Clancy in straight sets in Thursday night’s gold medal match. Ross and Klineman took the first set, 21-15, before sealing gold in the second set, 21-16. The victory completes a perfect 7-0 run to the top of the podium for Ross and Klineman, as they became the second American pair to ever go undefeated at the Olympics. Misty May-Treanor and Kerri Walsh Jennings accomplished the feat three times (2004, 2008, 2016). 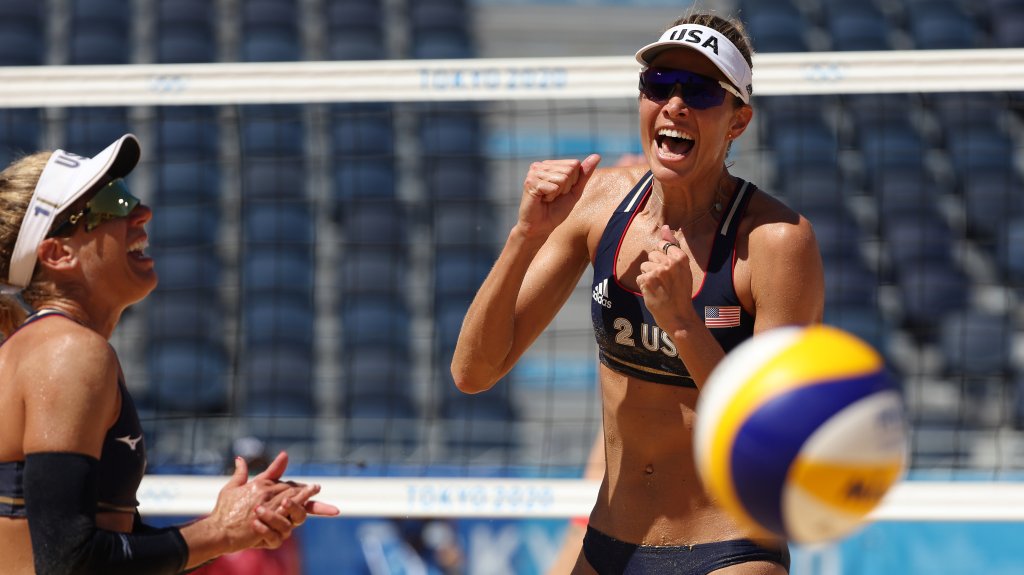 Alix Klineman #2 of Team United States and April Ross #1 celebrate as Team Switzerland hits match point out of bounds to end the game during the Women’s Semifinal beach volleyball on day thirteen of the Tokyo 2020 Olympic Games at Shiokaze Park on August 05, 2021 in Tokyo, Japan.

The stars will be under the bright lights of Tokyo’s Olympic Stadium on Friday.

Watch on Peacock, or stream live. 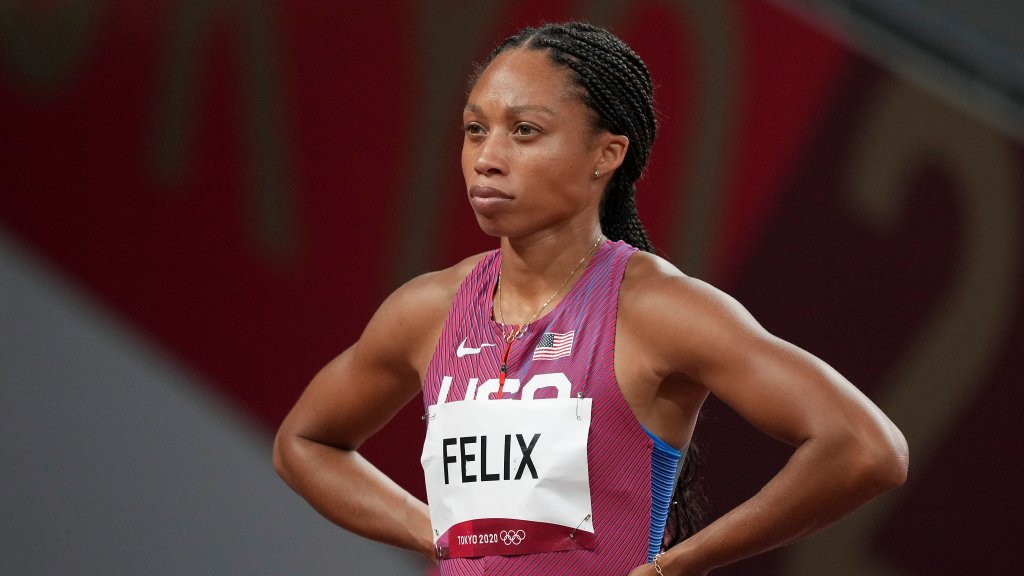 Team USA tips off against Serbia in women’s basketball semifinal

The U.S. women’s basketball has looked like a team determined to win its seventh straight Olympic gold medal so far in Tokyo.

After trailing heading into the second quarter of Wednesday’s quarterfinal matchup against Australia, Team USA took charge on its way to a 79-55 rout. The victory extended the team’s 53-game Olympic winning streak dating back to 1992 and put the team two wins away from another gold medal. Breanna Stewart continued her scorching Tokyo run with a game-high 23 points on 8-for-10 shooting.

Next up for Dawn Staley’s squad is a semifinal contest against Serbia, which went 2-1 in Group A play and handled China 77-70 in the quarterfinals. Serbia is looking for its second straight Olympic medal after earning bronze at the 2016 Rio Olympics.

Team USA is hoping to send Serbia back to the bronze medal game once again. Tipoff is at 9:40 p.m. Thursday. 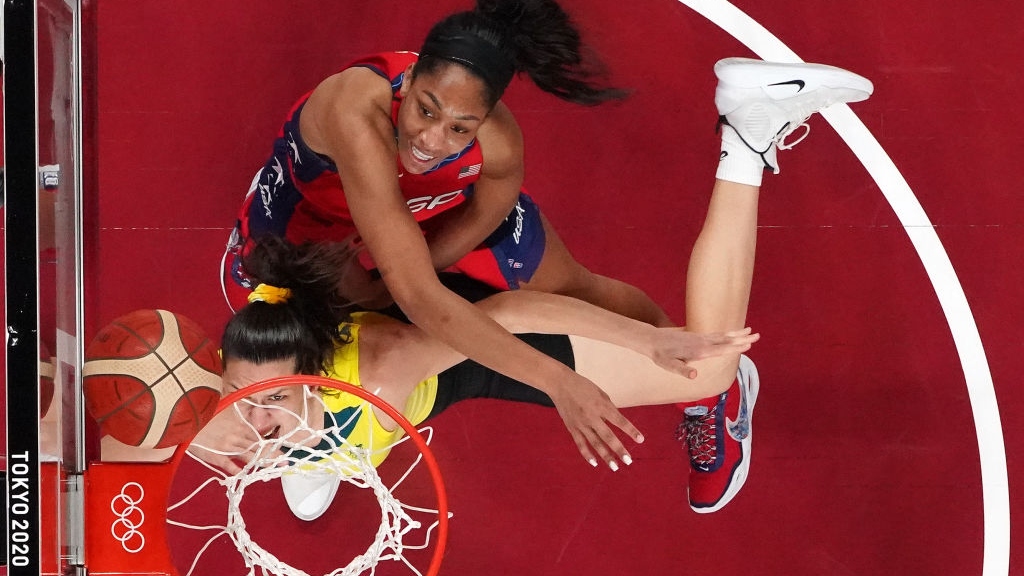 Marianna Tolo of Team Australia drives to the basket against A’Ja Wilson of Team USA during a Women’s Basketball Quarterfinals game.

Brooke Raboutou has a chance to make history during the first ever Olympic women’s sport climbing final, which begins at 1:30 a.m. Friday.

The 20-year-old climber placed fifth overall in Wednesday’s qualification at Tokyo’s Aomi Urban Sports Park. She finished 12th in speed, second in bouldering and eight in lead, totaling 192 points along the way.

Raboutou has some catching up to do if she wants to win an inaugural Olympic women’s sport climbing medal. Slovenia’s Janja Garnbret, South Korea’s Seo Chae-Hyun, Japan’s Miho Nonaka and Japan’s Akiyo Noguchi finished above her in qualifying. Nonaka, who placed third overall in qualifying, had half the points of Raboutou with 96, while Garnbret held the lead with 56.

The action begins with the speed final at 1:30 a.m., transitions to the bouldering final at 2:30 a.m. and ends with the lead final at 5:10 a.m. While the climbers take on three different disciplines, the medals will be awarded to the three highest finishers on the overall leaderboard. 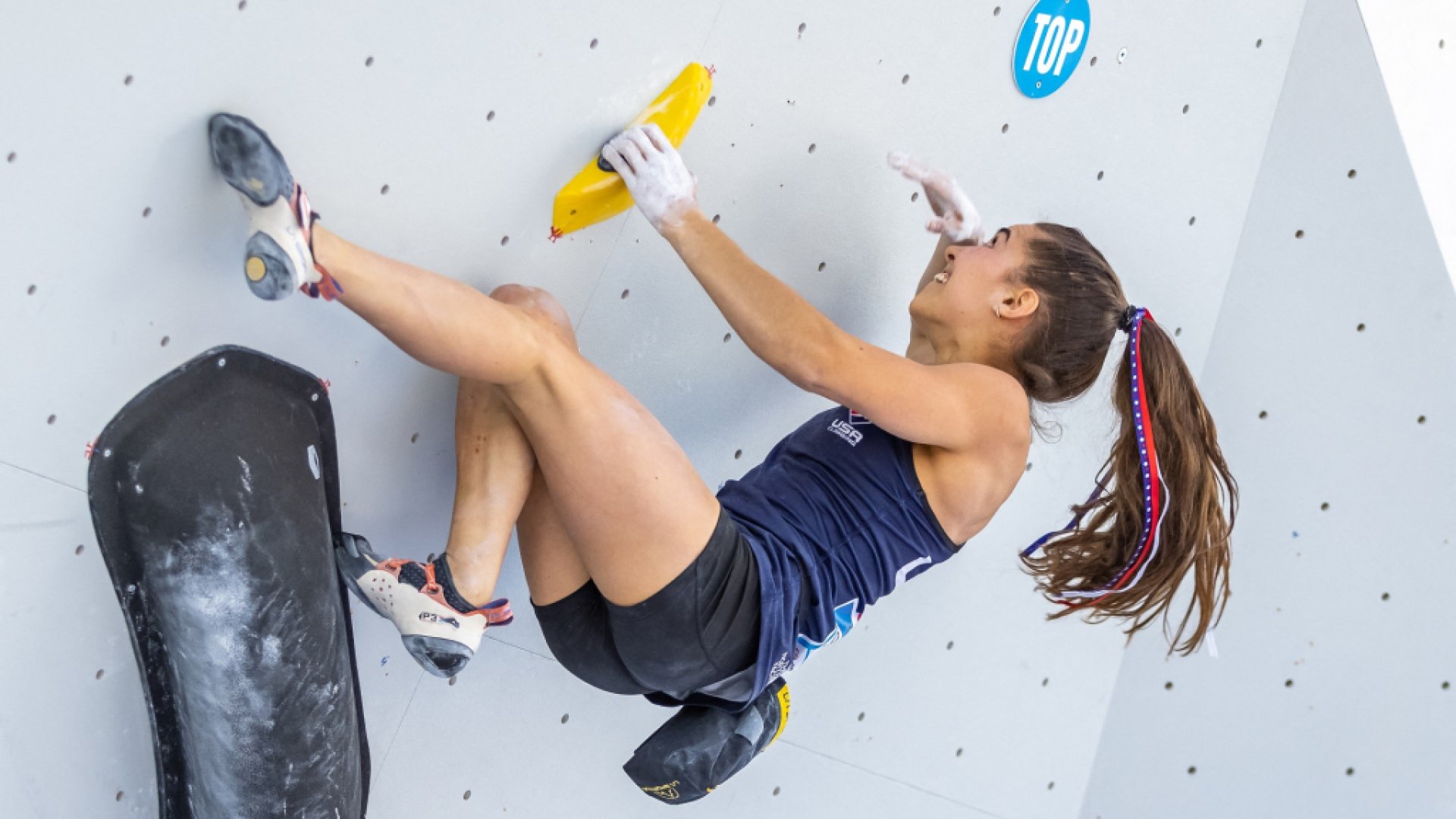 Brooke Raboutou of the US competes in the women’s Boulder competition semi-final of the IFSC Climbing World Cup in Innsbruck, Austria, on June 26, 2021.

The U.S. women’s volleyball team has overcome plenty of adversity in reaching the semifinals in Tokyo.

Two of the team’s top players, Jordan Thompson and Jordyn Poulter, went down during pool play with apparent injuries. Without two stars, the squad grouped together for a dominant quarterfinal win over Cuba on Wednesday. Andrea Drews stepped up at the net with 21 points, while Micha Hancock took Poulter’s spot as the facilitator and collected 37 assists.

Thursday’s match, which begins at 9 p.m., is a rematch of the semifinals in Rio. Serbia got the better of the U.S. last time, winning a tight contest in the fifth set. Serbia claimed silver, its first Olympic women’s volleyball medal, after falling to Brazil in the championship match.