After 16 days of Olympic competition, the flame has been extinguished in Tokyo, and we’ve said goodbye to the host nation Japan. The Japanese celebrated their music and culture with several beautiful Closing Ceremony performances, and the president of the Japanese Olympic Committee and the IOC President delivered their closing speeches to end the Games.

Watch the Closing Ceremony in Primetime

Here’s all the action from the Tokyo Closing Ceremony:

A Symbolic Close To A Historic Games

The Olympic Flame has been extinguished in Tokyo, signaling the official end of these Olympics.

After the flame went out, the word “ARIGATO,” which means “thank you” in Japanese, appeared on the screens in the stadium. The font used was the same as the one used to spell out “SAYONARA” on the screens at the end of the 1964 Games. Both words were shown in Romaji, which is the rominized alphabet for the Japanese language as opposed to Japanese characters.

Fifty-seven years after the first Summer Olympics in Japan, this display shows one final connection with the first Tokyo Olympics.

France Looks Ahead To Paris 2024 After Flag Handover

The French segment began with the national anthem and featured musicians playing throughout Paris, as well as a few notes from French astronaut Thomas Pesquet, who was playing his saxophone from the International Space Station. 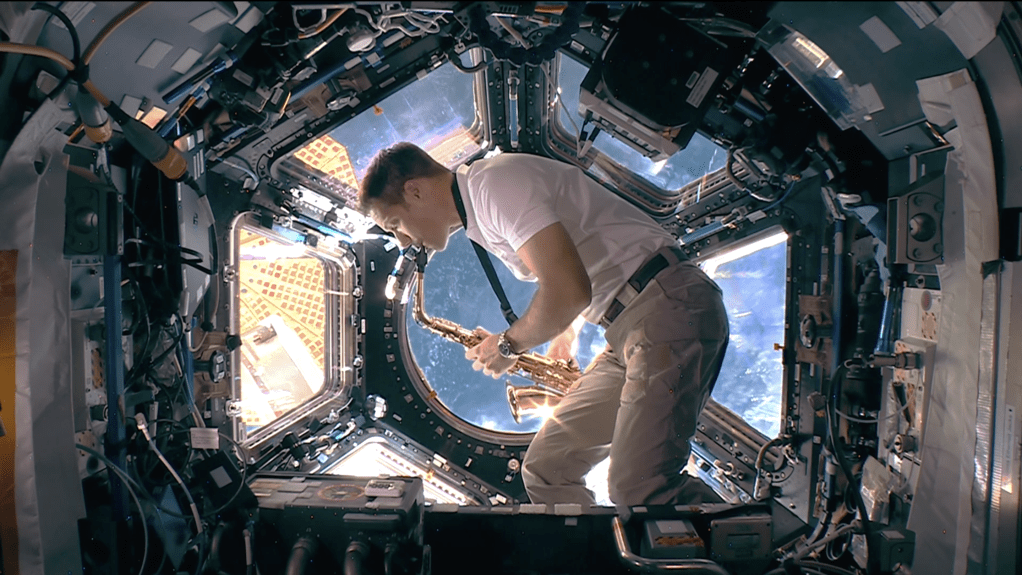 The musicians then played a reorchestrated version of the national anthem to overhead shots of the City of Lights. Fans gathered in the streets to celebrate the handover, and a performance of one of Paris’ new Olympic sports breakdancing took place on stage. 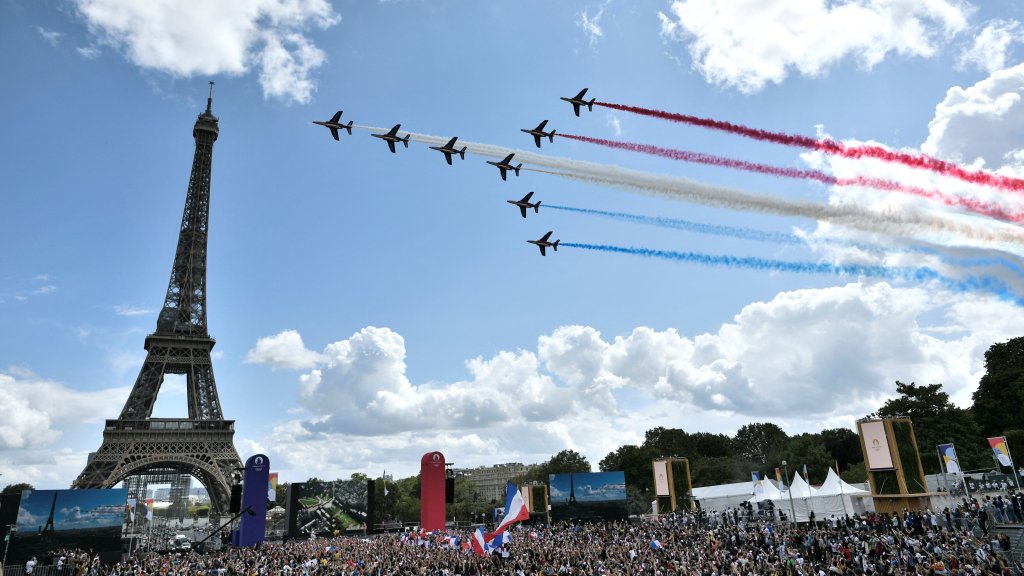 French aerial patrol fly over the fan village of The Trocadero set in front of The Eiffel Tower, in Paris on Aug. 8, 2021 upon the transmission of the closing ceremony of the Tokyo 2020 Olympic Games.

Several French Olympians from Tokyo waved to fans above the crowd, and French President Emmanuel Macron recited the Olympic motto in French.

The traditional handover of the Olympic flag took place at the closing ceremony. Yuriko Koike, governor of Tokyo, passed the Olympic flag to IOC president Thomas Bach, who then handed it over to Anne Hidalgo, the mayor of Paris. Paris will host the Olympics in 2024. 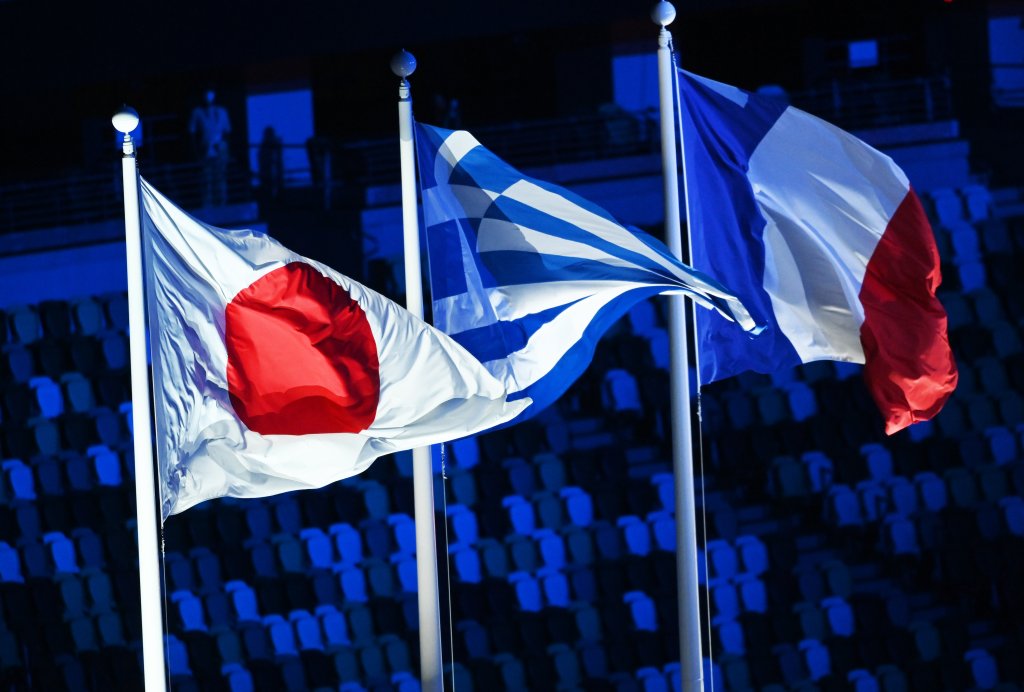 08 August 2021, Japan, Tokio: Olympics: Closing ceremony in the Olympic Stadium. The flags of Japan, Greece and France are waving in the wind. Photo: Marijan Murat/dpa (Photo by Marijan Murat/picture alliance via Getty Images)

The segment culminated in a live performance in the Olympic Stadium of the Tokyo Ondo, a dance born in modern times.

Molly Seidel Gets Her Bronze Medal At Closing Ceremony

At the Closing Ceremony, medals are always awarded for one event. The IOC chooses the event, but at the Summer Olympics, it’s traditionally the men’s marathon — which is always held on the final day of the Olympics. This year, for the first time, medals are awarded for both the men’s and women’s marathon, a nod to Japan’s commitment to gender inclusiveness during this Olympics.

American Molly Seidel, who won bronze, gets a moment in front of the world. 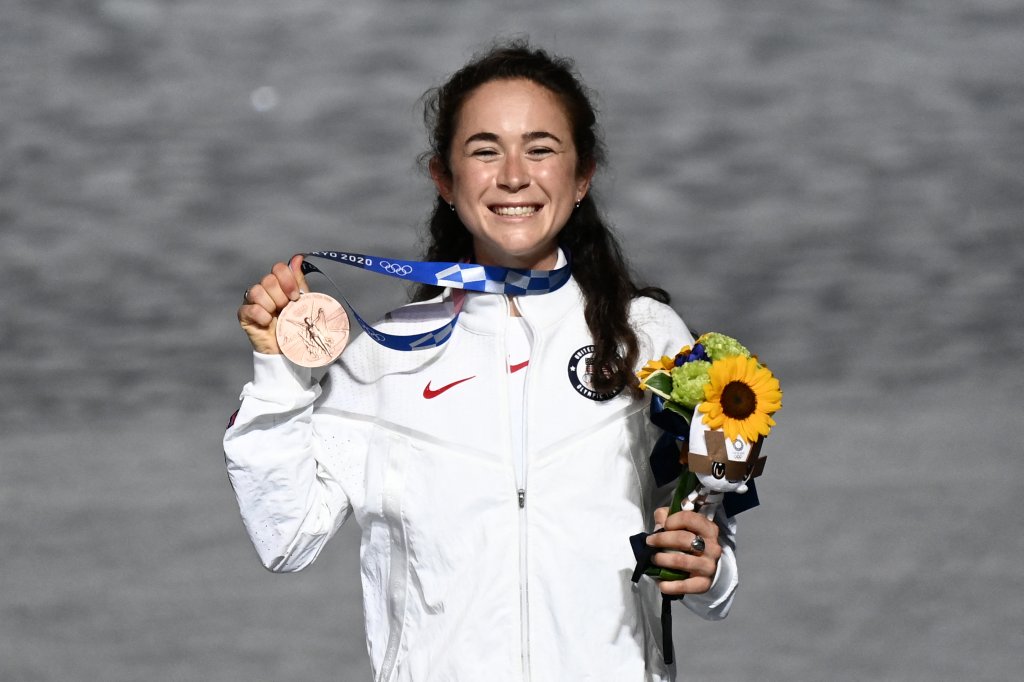 Team USA’s Molly Seidel celebrates on the podium during the victory ceremony of the women’s marathon event during the Tokyo 2020 Olympic Games closing ceremony at the Olympic Stadium in Tokyo on Aug. 8, 2021.

As the medal ceremony commences, it’s important to note that medals from the Tokyo Olympics were made from 100% recycled materials. The Tokyo 2020 organizing committee’s “Tokyo 2020 Medal Project” collected small electronic devices, such as used cell phones, throughout Japan to create the medals.

The project marked the first time in Olympics history where a host country included its citizens in the production of medals and used recycled materials to make awards for the Games.

‘All Tokyoites’ Give Athletes A Taste Of Tokyo

The Tokyo Ska Paradise Orchestra provided the soundtrack to a segment designed to let athletes who have been cooped up in quarantine experience Tokyo.

Ska music originated in Jamaica in the 1950s, a precursor to reggae, but it’s been big in Japan for decades, and the Tokyo Ska Paradise Orchestra has been one of the most popular Japanese ska bands since it was formed in the 1980s.

Athletes stayed on the infield, designed to represent Tokyo parks, while dancers performed around them. 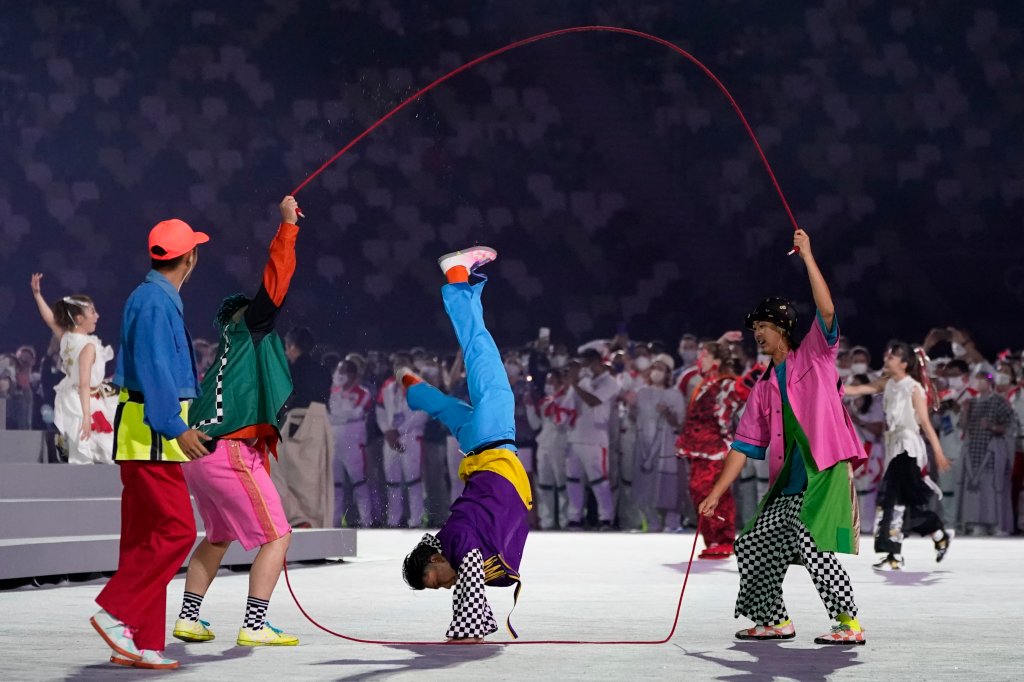 Dancers perform during the closing ceremony in the Olympic Stadium at the 2020 Summer Olympics, Sunday, Aug. 8, 2021, in Tokyo, Japan. 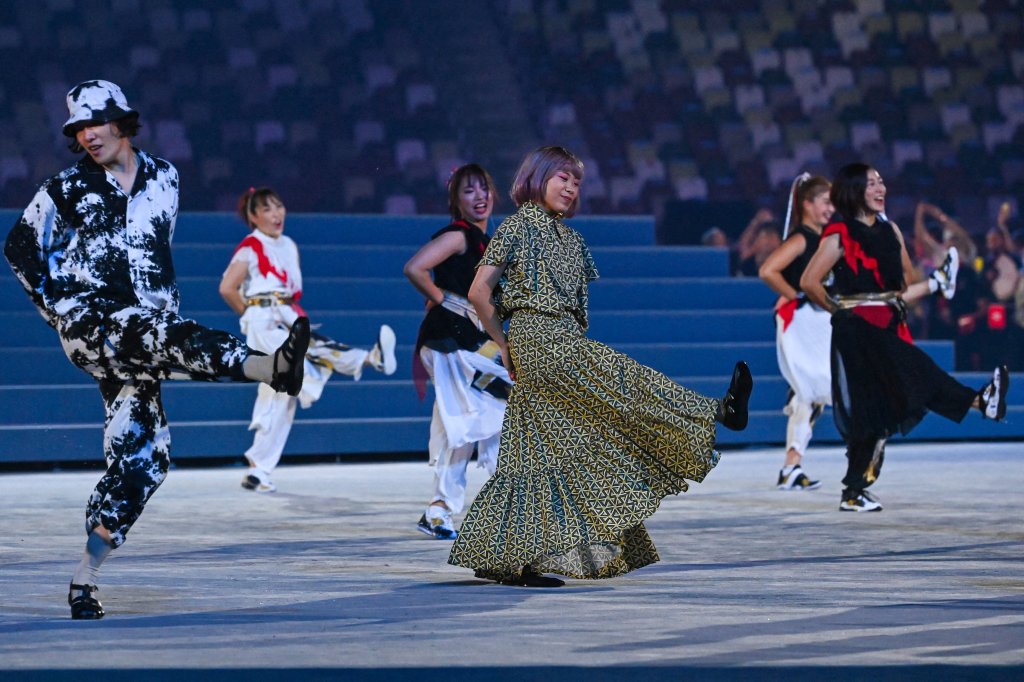 Performers dance during the closing ceremony of the Tokyo Olympic Games, at the Olympic Stadium, in Tokyo, on Aug. 8, 2021.

After the athletes finished entering the stadium, a light show culminated in the display of the Olympic rings.

Thirty-two minutes into the parade, the American team entered the stadium. 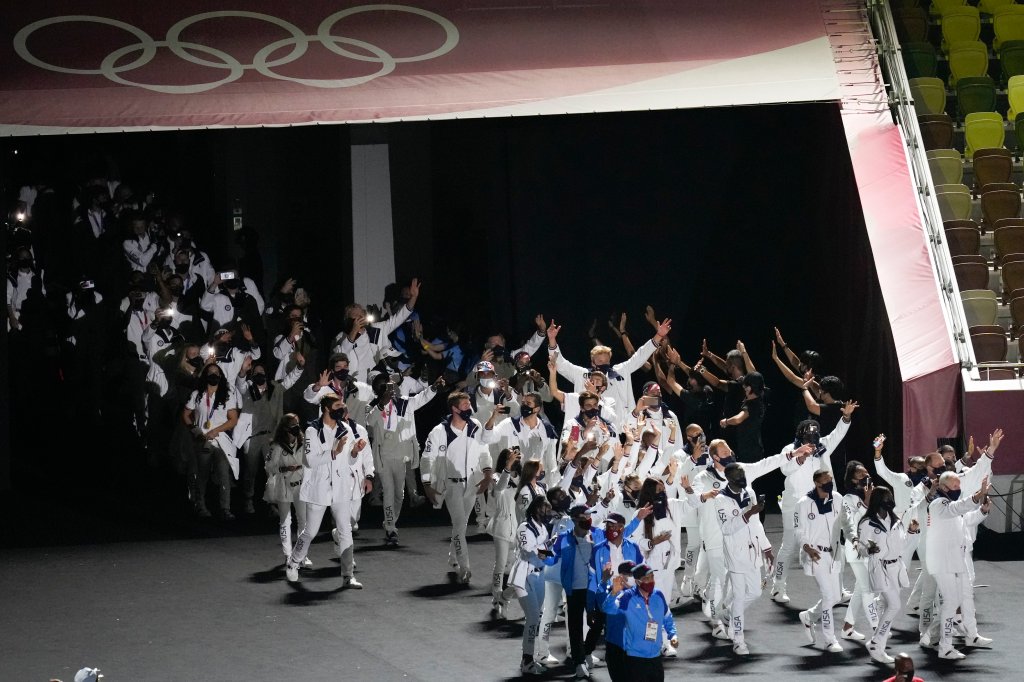 The United States of America athletes walk in during the closing ceremony in the Olympic Stadium at the 2020 Summer Olympics, Sunday, Aug. 8, 2021, in Tokyo, Japan.

But you didn’t see every member of Team USA there — many big-name stars have already returned to the United States, as COVID protocol required athletes to depart Olympic Village within 48 hours of their final competition. So members of the swimming and gymnastics team, for example, have already left Tokyo.

Thousands of athletes from across the world paraded into the closing ceremony. Over 4,500 athletes representing 206 countries will process in, according to Tokyo organizers,

Many athletes were seen waving their national flags or capturing the moment with videos. Each nation put their own twist on the entrance, including Americans wearing all white, Canadians rocking custom jean jackets and plenty of athletes with medals around their necks. 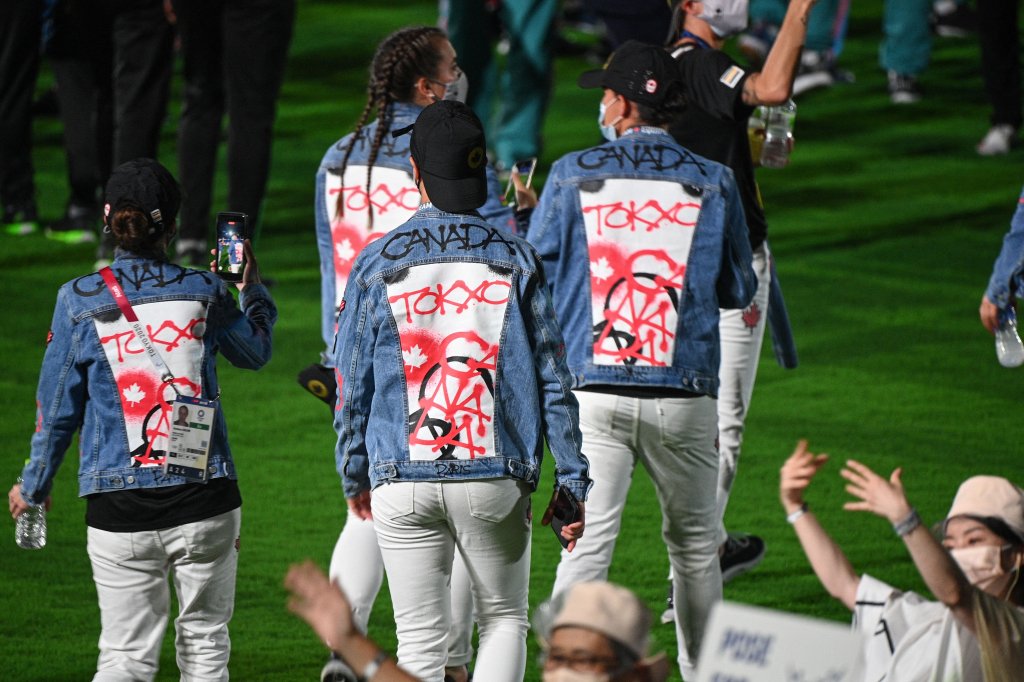 Canada’s athletes walk across the field during the closing ceremony of the Tokyo 2020 Olympic Games, on Aug. 8, 2021 at the Olympic Stadium in Tokyo. 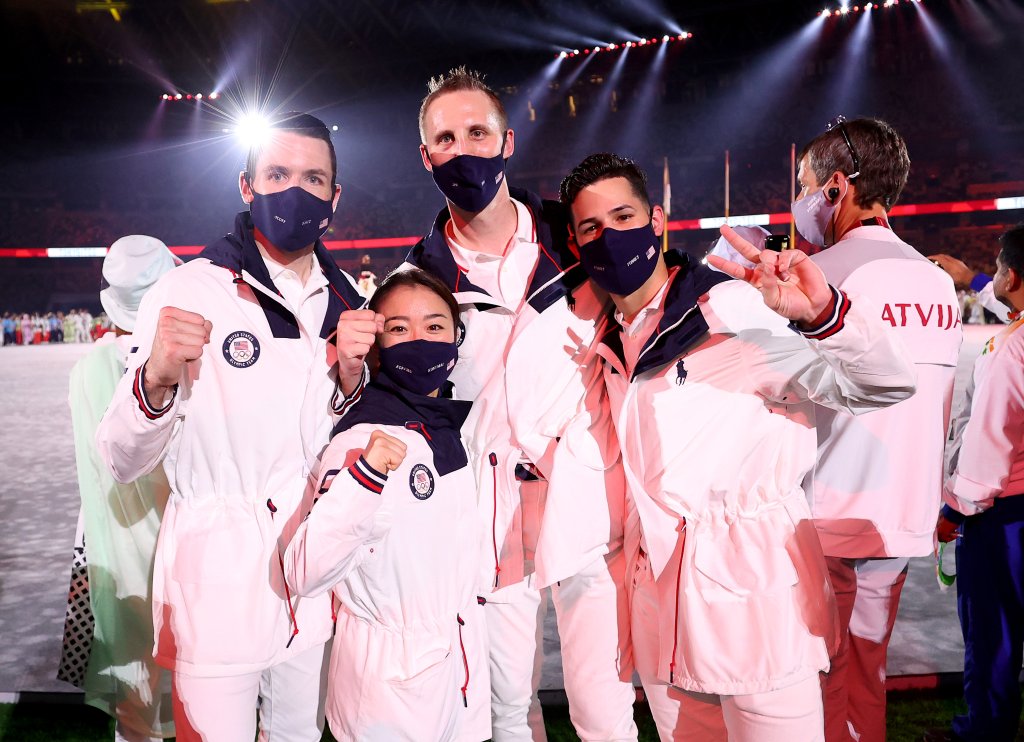 Members of Team USA celebrates during the Closing Ceremony of the Tokyo 2020 Olympic Games at Olympic Stadium on Aug. 8, 2021 in Tokyo, Japan.

After the raising of the Japanese flag, the flag bearer for each country entered the stadium — with the U.S. flag carried by Javelin thrower Kara Winger. 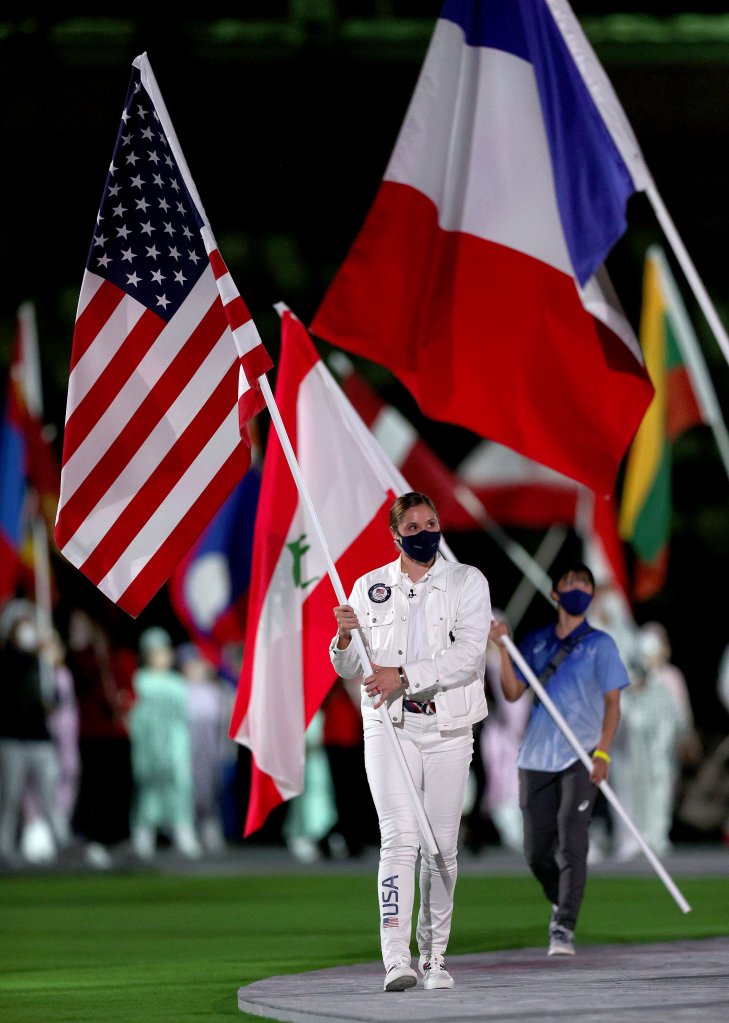 Flagbearer Kara Winger of Team United States during the Closing Ceremony of the Tokyo 2020 Olympic Games at Olympic Stadium on Aug. 8, 2021 in Tokyo, Japan.

Each country chooses its own flag bearer. 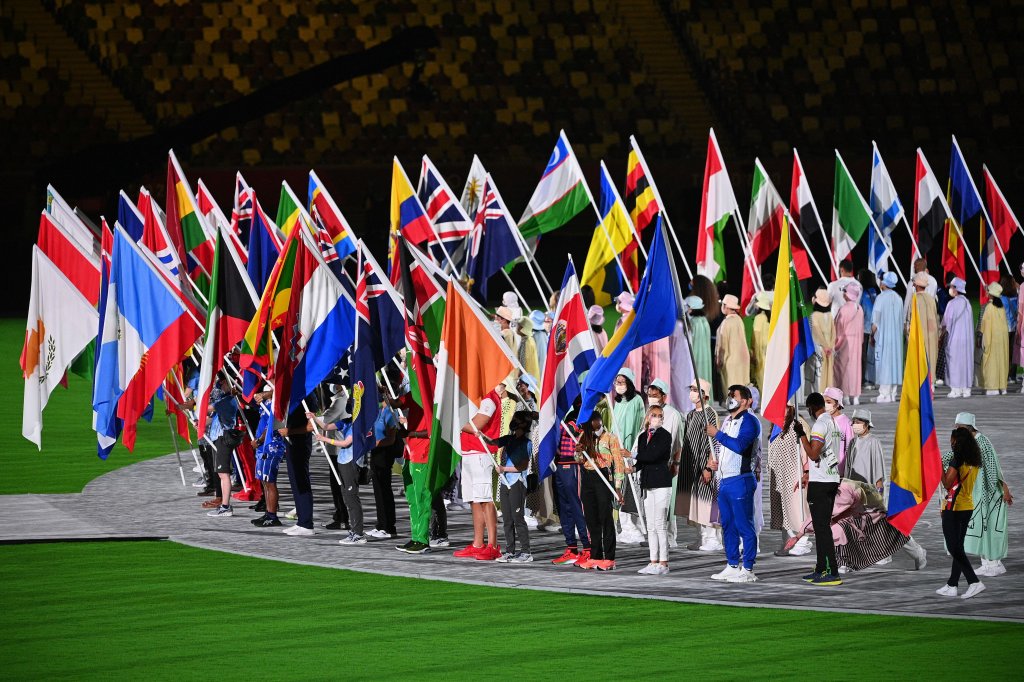 Athletes carry their nations’ flags to the field of play during the closing ceremony of the Tokyo 2020 Olympic Games, on Aug. 8, 2021 at the Olympic Stadium in Tokyo.

Once the flags are all in the stadium, athletes from all countries will enter together, en masse, in no particular order — a stark difference from the Opening Ceremony, when each athletes enter with their countrymen.

Athletes have been marching together in the Closing Ceremony since 1956.

The Takarazuka Revue, a Japanese all-female musical theater group, performed the national anthem at the closing ceremony as the Japanese national flag was raised.