For Olympic athletes like U.S. gymnast Simone Biles, there’s so much pressure to succeed. They’ve trained their whole lives for this moment – to win an Olympic medal.

That moment happened for American gymnast Kerri Strug back in 1996.

Strug was part of the U.S. women’s gymnastics team, also known as the “Magnificent Seven,” during the Summer Games in Atlanta 25 years ago.

It was during those games that Strug did something on the gym floor no one had seen before.

Strug severely injured her ankle after an awkward landing from the vault. She continued to perform a second vault – on her injured ankle – and nailed the landing on one foot, before collapsing in pain. 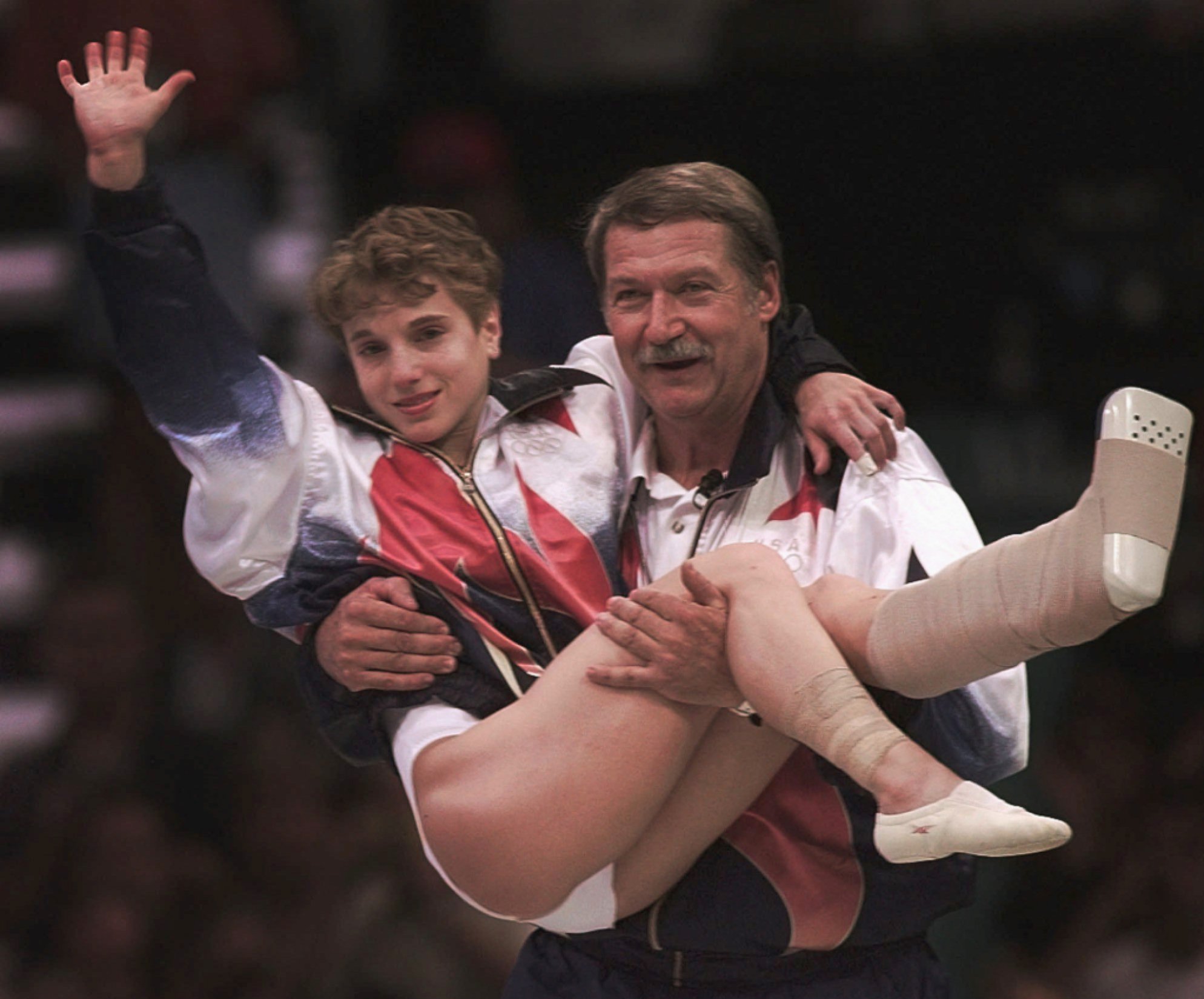 USA’s Kerri Strug is carried by her coach, Bela Karolyi, as she waves to the crowd on her way to receiving her gold medal for the women’s team gymnastics competition, at the Centennial Summer Olympic Games in Atlanta on Tuesday, July 23, 1996. Strug suffered two torn ligaments and a sprained ankle from the vault competition.

While the world cheered her on for her perseverance, many fellow gymnasts who endured the rigors of coaches Bela and Marta Karolyi’s ranch believed Strug was conditioned to push through her pain under an abusive environment where girls were afraid to challenge authority.

Several U.S. gymnasts and coaches interviewed by The Associated Press back in 2018 described a win-at-all-cost culture rife with verbal and emotional abuse in which girls were forced to train on broken bones and other injuries.

That culture was tacitly endorsed by USA Gymnastics and institutionalized by the Karolyis, the legendary coaches who trained America’s top female gymnasts for three decades, including Biles, Aly Raisman, McKayla Maroney and another member of the 1996 “Magnificent Seven,” gymnast Dominque Moceanu.

On Wednesday, Moceanu tweeted about her experience while showing her support for Biles.

“I was 14 y/o w/ a tibial stress fracture, left alone w/ no cervical spine exam after this fall,” Moceanu wrote. “I competed in the Olympic floor final minutes later. Simone Biles’s decision demonstrates that we have a say in our own health—“a say” I NEVER felt I had as an Olympian.”

Fast-forward to the Tokyo Olympics. Biles withdrew from the team final, citing her mental health. Biles will also not compete in the women’s individual all-around final on Thursday, USA Gymnastics announced.

Her decision to pull out was supported by her coaches and an organization that has overhauled its leadership in the wake of the Larry Nassar scandal.

Biles said she was feeling the pressure of expectations, of winning gold medals and performing perfectly.

The two-time Olympian tweeted her supported for Biles.

“Sending love to you @Simone_Biles,” Strug, 43, wrote, along with a goat emoji and a heart, representing the fact that Biles is known as the GOAT, or the greatest of all time.

The gold medalist also praised the entire women’s team, who won a silver medal, behind the Russian Olympic Committee on Tuesday.

“Congrats #teamusa,” Strug wrote. “Great respect for all your hard work and support for each other. We are proud of you!”

Where is Kerri Strug now?

She now splits her time between Washington, D.C., and her home state of Arizona.

Strug is married and has two children.

Three-time Olympian Dominique Dawes, also a member of the ’96 U.S. women’s gymnastics team with Strug and Moceanu, told CNBC that she, too, understands what type of pressure Biles is feeling.

“I felt that leading into the 1996 Olympic games in Atlanta, Georgia,” Dawes said. “We were expected to win gold, to make history, to be the first-ever women’s team to do that, and I knew, as one of the leaders of that team, that my scores really did matter, so I feel what she’s feeling, but I hope she knows that we’re behind her every step of the way, and no matter what the outcome is, we love her, and she’s a positive force for the sport of gymnastics.”

Shannon Miller, the most decorated U.S. female gymnast in Olympics history, provided her perspective about Biles’s decision to withdraw.

“What I think is really important here is, you have Simone, who clearly knew something wasn’t quite right, and when you are flying and flipping and turning 10, 15 feet above the floor, looking for a landing, you better be in the right headspace or really bad things are going to happen,” Miller said on a Tuesday evening interview on CNBC’s “The News with Shepard Smith.”

Miller, who won a total of seven Olympic medals, said that Biles is sending a critical message to the world.

Biles will continue to be evaluated daily to determine whether or not she will compete in next week’s individual event finals.