Two Massachusetts sisters and a Connecticut goalkeeper played with the U.S. women’s soccer team Monday morning as they battled Canada for a spot in the gold medal game, but ultimately lost.

Here’s what’s coming up, and who and how to watch:

USWNT Knocked out by Canada in Semifinals

The U.S. women’s soccer team has missed out on gold for the second straight Olympics.

Canada eliminated the USWNT with a 1-0 win in Monday’s semifinal. Canada’s Jessica Fleming capitalized on a penalty kick opportunity in the 74th minute to give Canada a 1-0 lead over the U.S. women’s soccer team.

After a video review, it was determined Fleming was fouled in the box and was given the chance to score the lone goal of the game. Goalkeeper Adrianna Franch, who replaced an injured Alyssa Naeher, read it the right way, but the shot was too far away from her outstretched arms to save.

The USWNT will have a chance to reach the podium in Thursday’s bronze medal match against the loser of the other women’s semifinal between Australia and Sweden.

Goalkeeper Alyssa Naeher, a native of Bridgeport, Connecticut, was injured in the semifinal game. Naeher, 33, leapt to corral a Canadian cross and collided with teammate Julie Ertz, put off-kilter and landing hard on her right foot.

The Olympics are a family affair for Samantha and Kristie Mewis, two sisters and standout soccer players from Hanson, Massachusetts. Born in Weymouth, Kristie went to Boston College and Sam, less than two years younger, went to UCLA. The duo play midfield for the U.S. Women’s National Team, the first appearance for each at the Games.

The result was far and away Carey’s best at the Olympics. She finished in eighth place in each of her previous two finals, the individual all-around and vault.

Brazil’s Rebeca Andrade came in fifth a day after becoming her country’s first ever female Olympic gold medalist gymnastic with a win in Monday’s vault final.

Another action-packed day of Olympic track and field began at 8 p.m. ET on Sunday.

The first session of the evening was highlighted by two finals: men’s long jump and women’s 100m hurdles.

Team USA’s Juvaughn Harrison is attempting the astonishing feat of competing in the high jump, where he is a medal favorite, and long jump in Tokyo — the latter which he completed Sunday night.

The United States won gold at the 2016 Rio Games in men’s long jump but will not take the podium in Tokyo, after Harrison finished fifth in his Olympic debut with a jump of 8.15m. 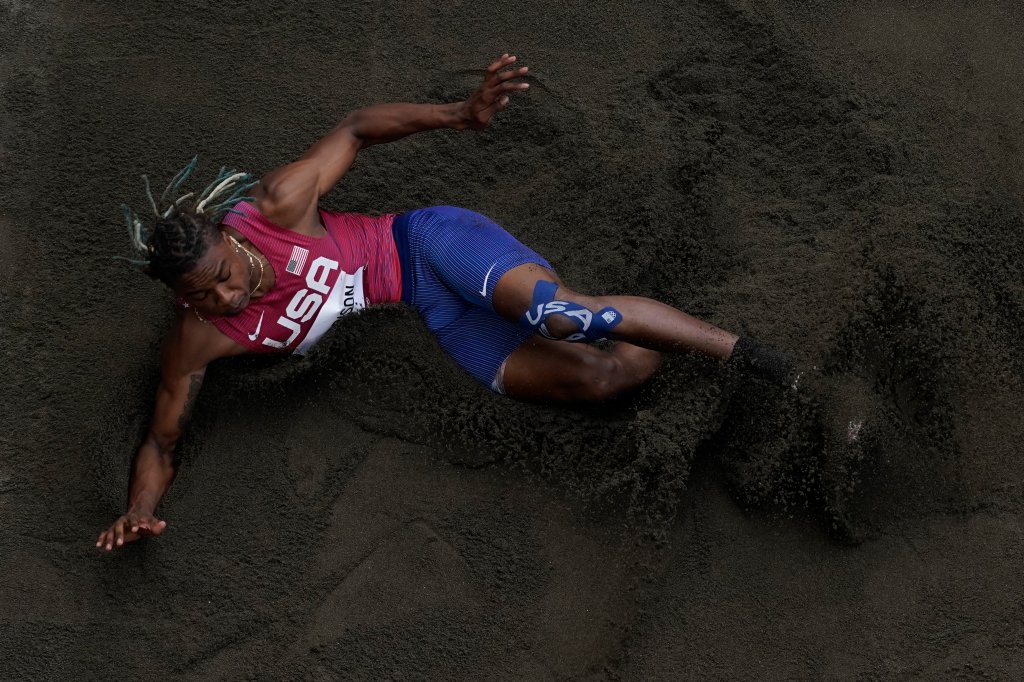 Juvaughn Harrison, of the United States, competes during the finals of the men’s long jump at the 2020 Olympics, Monday, Aug. 2, 2021, in Tokyo, Japan.

Harrison had a chance to win the U.S. its fourth gold medal in the event over the last five Olympics, but fell just short Sunday. She came away with the silver medal, posting a time of 12.52 in her Olympic debut.

Puerto Rico’s Jasmine Camacho-Quinn won gold with a time of 12.37, and Megan Tapper of Jamaica placed third in the thrilling finish to claim bronze. 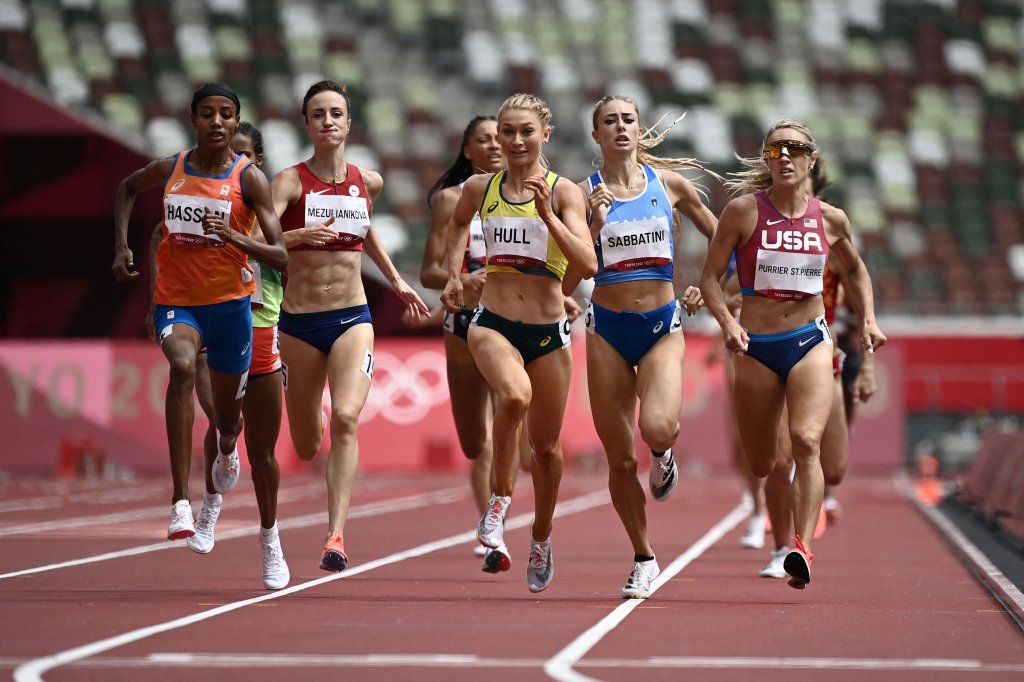 Thomas advanced in the women’s 200m, as did Team USA’s Jenna Prandini and Anavia Battle. All three Americans finished in the top 10. Thomas finished in second place overall with a time of 22.20 in Heat 4.

Jamaica’s Elaine Thompson-Herah, fresh off setting an Olympic record in the women’s 100m, will also begin her quest to defend her gold medal in the 200m.

The second session begins at 6 a.m. ET on Monday and features three finals: the women’s discus throw (7 a.m. ET), men’s 3000m steeplechase (8:15 a.m. ET) and women’s 5000m (8:40 a.m. ET). Valarie Allman will try to be the first American woman to medal in discus since 2008. Hillary Bor gives the U.S. its best chance at a medal in steeplechase, while Elise Cranny, Karissa Schweizer and Rachel Schneider will represent Team USA in the women’s 5000m.

The U.S. got off to a slow start in the first quarter and was down 22-19 at the end of the first.

However, Team USA was able to go on a run and come back to take the lead at halftime, 50-44.

It’s official: Jayson Tatum and the U.S. men’s basketball team will play Spain in the quarterfinals on Tuesday.

Tatum scored 27 points in Team USA 119-84 win over the Czech Republic on Saturday, which sent the U.S. to the quarterfinals.

By virtue of their victory, the U.S. finished second in Group A, meaning they avoided Australia, France and the winner of Sunday’s game between Spain and Slovenia in the quarterfinals.