The U.S. men’s basketball team faced off against Australia after Tatum helped team USA to the semifinals of the Tokyo Olympics with a win over Spain on Tuesday.

Meanwhile, Hanson sisters Sam and Kristie Mewis will be back on the field with the U.S. women’s soccer team as they look to bounce back from a gutting semifinal defeat against Canada.

Here’s how to watch our local athletes and more:

TOKYO, JAPAN – AUGUST 3: Jayson Tatum #10 hi-fives Kevin Durant #7 of the USA Men’s National Team during the game against the Spain Men’s National Team during the 2020 Tokyo Olympics on August 3, 2021 at the Super Saitama Arena in Tokyo, Japan. NOTE TO USER: User expressly acknowledges and agrees that, by downloading and or using this photograph, user is consenting to the terms and conditions of the Getty Images License Agreement. Mandatory Copyright Notice: Copyright 2021 NBAE (Photo by Stephen Gosling/NBAE via Getty Images)

Team USA defeated Australia 97-78 to advance to the gold medal game. While the final score reflects a blowout, that certainly was not the case early in the game.  A 28-4 U.S. run that started late in the second quarter and carried into the third turned what had been a 15-point deficit into a comfortable lead.

Kevin Durant led the way with 23 points and nine rebounds, placing him one win away from tying Carmelo Anthony’s Olympic record of three gold medals in basketball. Devin Booker added 20 points on 7-for-10 shooting.

The United States advanced to the gold medal game on Friday at 10:30 p.m. ET against the winner of France and Slovenia.

For the second consecutive Olympics, Americans Ryan Crouser and Joe Kovacs finished first and second respectively in the men’s shot put event. Crouser beat his own Olympic record, throwing the shot put 23.30 meters on his final attempt to take the gold. New Zealand’s Tom Walsh won bronze, which he also took in 2016, making it a repeat across the board on the winner’s podium. It is the first time that has happened in a track and field event in Olympic history.

Grant Holloway finished second to claim silver in men’s 110m hurdles, posting a time of 13.09 despite being the overwhelming favorite to win it all. The world champion blazed to the quickest time in the hurdles semifinals, but was unable to hold on to the top spot in the final. Hansle Parchment of Jamaica won gold in the upset, posting a time of 13.04, and handed Holloway his first loss of the year. Jamaica also won gold in the 2016 Rio Olympics.

The U.S. advanced in the women’s 4x100m relay, finishing second overall with a time of 41.90. Team USA, which comprised of Javianne Oliver, English Gardner, Teahna Daniels and Aleia Hobbs finished ahead of Team Jamaica. The heats were missing the star power of Allyson Felix, Shelly-Ann Fraser-Pryce and reigning women’s 100m and 200m champion Elaine Thompson-Herah.

Unfortunately the men did not fare as well. Team USA, which included Trayvon Bromell, Ronnie Baker, Fred Kerley and Cravon Gillespie, finished sixth in Heat 2 (eighth overall) with a time of 38.10.The U.S. men’s team hasn’t medaled in the 4x100m relay since earning silver in 2004.

Vashti Cunningham was the only member of Team USA to advance in women’s high jump. Cunningham automatically qualified after posting a jump of 1.95m on her third and final attempt. She placed 13th in high jump at the 2016 Rio Olympics, and is a favorite to win it all at Tokyo.

Team USA’s Will Claye finished fourth in men’s triple jump. His longest jump was 17.44m on his third attempt. The two-time silver medalist looked to claim gold for the United States with the absence of two-time Olympic triple jump champion Christian Taylor, who did not compete due to a ruptured Achilles tendon. Pedro Pablo Pichardo of Portugal won gold with a jump of 17.98m on his third attempt.

The U.S. women’s soccer team got back to the Olympic podium.

The team wasn’t standing atop the perch they expected, nor were the medals around the players’ necks the color they hoped, but they made an important return to the podium after failing to get there in 2016 for the first time.

It was two of the team’s gold-medal winning veterans who helped get them there Thursday. Megan Rapinoe and Carli Lloyd each scored two goals to lead the U.S. to a 4-3 win over Australia in the bronze medal game at the Tokyo Olympics.

Loved ones of Sam and Kristie Mewis, two sisters and standout soccer players from Hanson, Massachusetts, have been cheering the team on from home along the way.

Born in Weymouth, Kristie went to Boston College and Sam, less than two years younger, went to UCLA. The duo play midfield for the U.S. Women’s National Team, the first appearance for each at the Games. 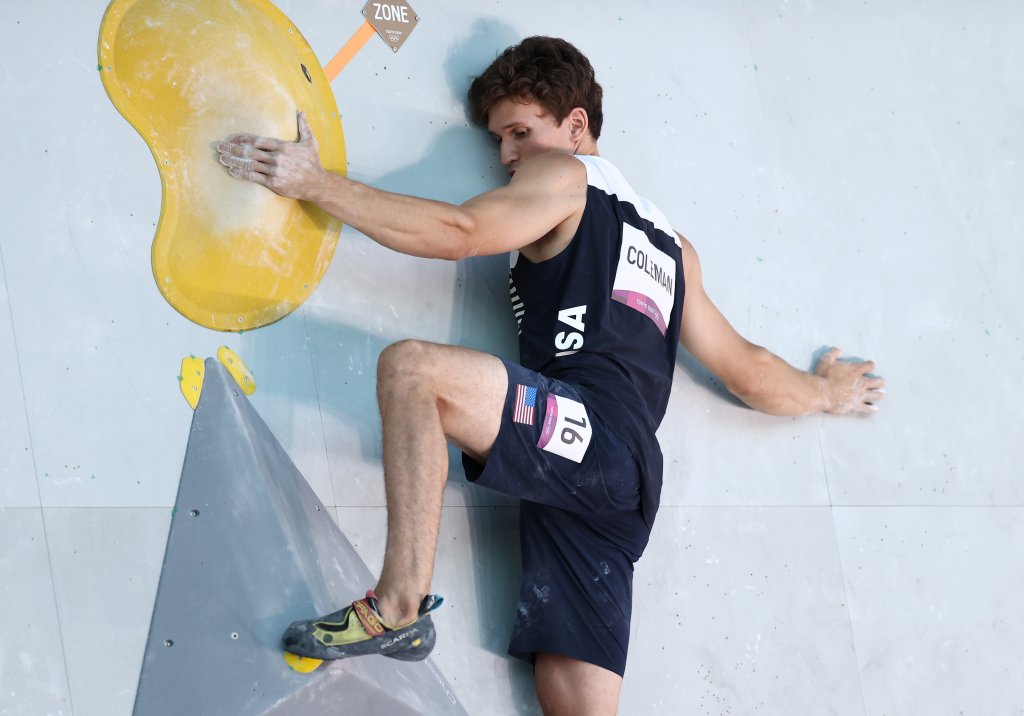 Coleman finished with 30.00 total points to finish second. In sport climbing, the lower the points, the better, so Coleman finished two points behind Alberto Gines Lopez of Spain, whose 28.00 won the gold.

Down 3-2 with less than 20 seconds remaining, Taylor was able to get on top of Yazdani, the 2016 Olympic gold medalist, and notch the critical two points to give him the lead, and then let the clock tick away.

Taylor and Yazdani have a history that dates back to 2017. Taylor, nicknamed the Magic Man, upset Yazdani in their first matchup at the 2017 World Cup, fresh off of Yazdani’s gold in Rio. Their second matchup came at the 2018 world championships, where Taylor came out on top as well. Yazdani had not lost a match since then, but Taylor made it a perfect 3-for-3 against the Iranian with the win in Tokyo.

The gold medal match was back-and-forth throughout. Yazdani earned a point early after Taylor failed to go for a point attempt. Taylor then got a two-point takedown to give him a 2-1 lead.

Yazdani secured back-to-back points to regain the lead by forcing Taylor out of bounds before the American was able to get the comeback in the final seconds of the match. 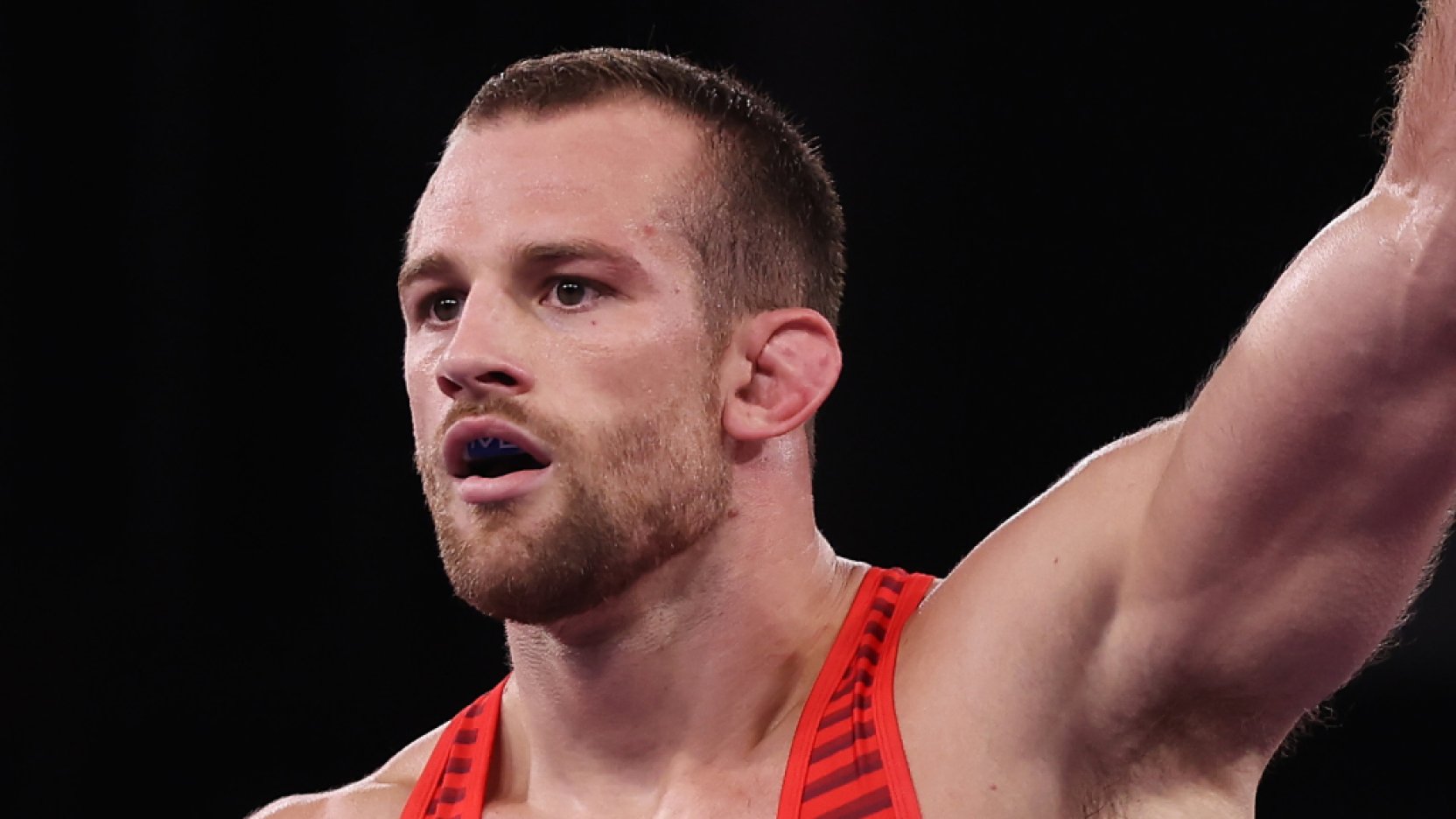 David Morris Taylor III of Team USA celebrates his win over Deepak Punia of Team India during the Men’s Freestyle 86kg Semi Final on day twelve of the Tokyo 2020 Olympic Games at Makuhari Messe Hall on Aug. 4, 2021 in Chiba, Japan.