Tatum, US Look for Another Win; Swimmers Continue Dominant Streak

In the loss, Tatum tallied nine points, one rebound and two blocks. He chipped in 14 more points in Team USA’s win over Iran, during which the team seemed to find some chemistry.

The United States’ quest for gold in basketball continues with a match-up against the Czech Republic.

Meanwhile, American swimmers have been dominating in Tokyo and continued their hot streak Friday.

Here’s what’s coming up, who and how to watch:

Next up for Team USA in preliminary Group A play is the Czech Republic at 8 a.m ET on Saturday. Kevin Durant has a chance to surpass Carmelo Anthony as the all-time leading scorer in United States men’s Olympic basketball history. Durant currently sits five points shy of the record (336 points) held by Anthony.

The race that will crown the world’s fastest woman takes place on Day 8 of the Tokyo Olympic Games. While it is certainly the most high-profile race of the evening, there are plenty of noteworthy events happening in track and field.

The second session begins at 6 a.m. ET Saturday and will include the marquee race of the day: the women’s 100m. American Sha’carri Richardson was supposed to go to Tokyo as a medal favorite in the event, but will no longer compete after being suspended one month for failing a drug test at the U.S. Olympic Track and field trials.

Teahna Daniels, Javianne Oliver and Jenna Prandini all qualified to race in the women’s 100m. They will carry the burden of trying to win the United States’ first legal gold since Gail Devers triumphed in 1996. Marion Jones was stripped of the 2000 title for doping offences.

Caeleb Dressel and Katie Ledecky highlighted another strong night for Team USA in swimming, despite their mixed 4x100m medley relay team finishing off the podium in the last race of the session.

In the first of Dressel’s three Olympic swims on Friday, he won gold in the 100m butterfly with a time of 49.45 seconds, improving on his own world record. Meanwhile, Kristof Milak of Hungary took silver and Noe Ponti of Switzerland took bronze.

Dressel later finished first in his semifinal of the 50m freestyle to advance to tomorrow night’s final, where he could pick up a fourth medal in these Games to add to his golds. He also anchored the mixed relay team in freestyle but couldn’t make up an eight-second deficit.

Ledecky won the 800m for the third straight time, giving her six individual gold medals in her career, the most of any female swimmer. She had been tied with Hungarian great Krisztina Egerszegi.

Ariarne Titmus of Australia, who finished ahead of Ledecky in both the 200m (silver to Ledecky’s fifth) and 400m (gold to Ledecky’s silver), finished second in the 800. Simona Quadarella of Italy took bronze.

Ledecky has 10 medals total, but could add to her collection in the future.

The United States women’s volleyball team was looking to continue its undefeated streak on Friday night, but it came to an end against the Russian Olympic Committee.

The defeat wasn’t the only major loss for Team USA — superstar Jordan Thompson left with an apparent injury.

Thompson landed hard on her ankle from a block early in the second frame and was immediately removed from the game. She was being evaluated on the sidelines through the remainder of the second set, but left the court when it concluded.

Thompson has been on fire at the Olympics for Team USA. She is the United States’ leading point-scorer in Tokyo, and recently wowed the world with a 34-point game against China this week.

Krysta Palmer, a former gymnast who didn’t start diving until she was 20, has an outside chance at medaling in the women’s 3m springboard. She and the other American in the field, Hailey Hernandez, advanced to the semis at 2 a.m. Saturday.

Palmer, 29, finished eighth in the synchronized springboard final with her partner, Alison Gibson. She finishes her slate of dives in the individual competition with a difficult dive known as “the double out.” 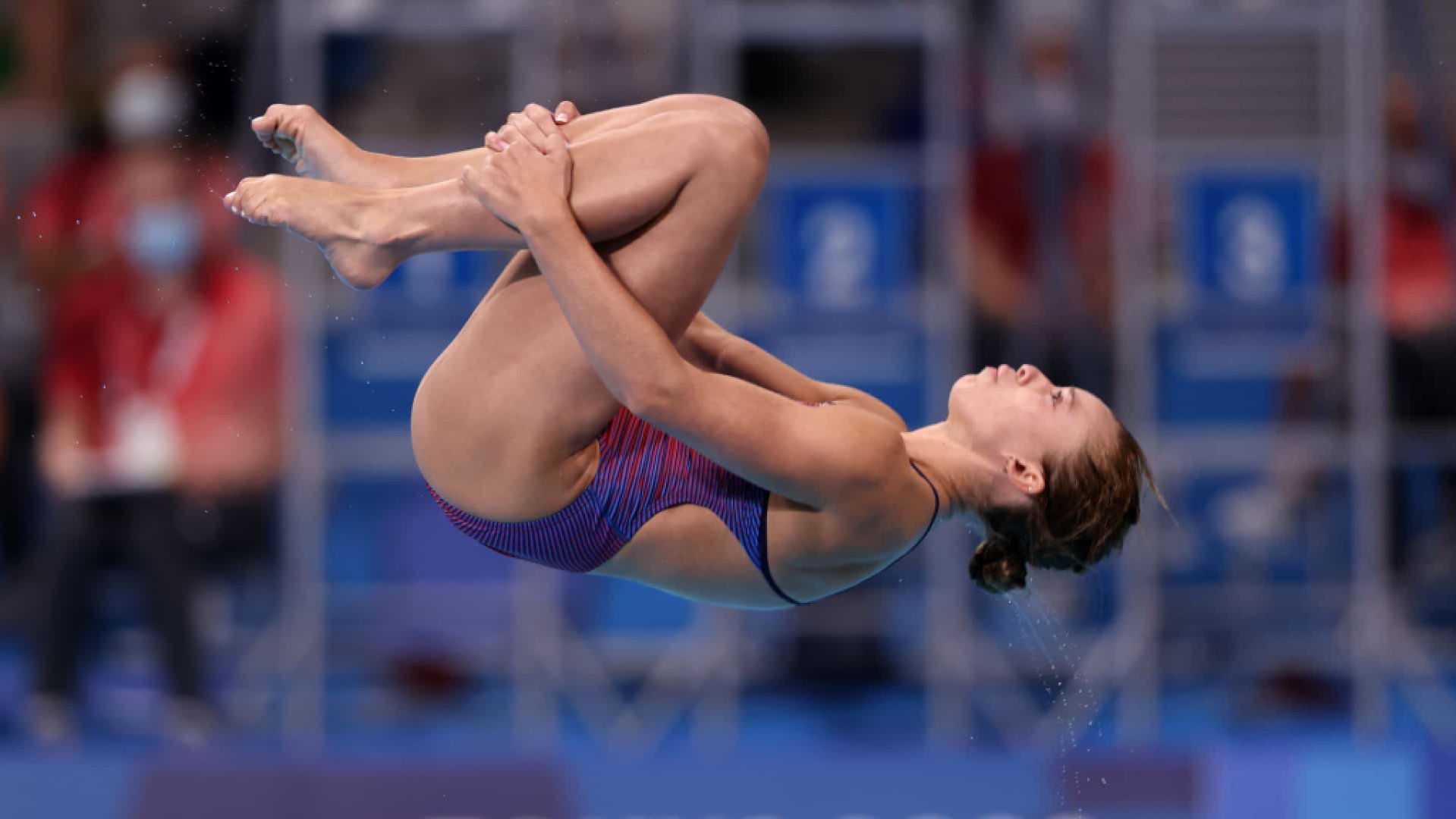