The biggest news out of Tokyo on Thursday was by far American gymnast Sunisa Lee’s clutch performance that won her the gold medal in the individual all-around.

At the start of Olympic gymnastics competition in Tokyo, it would have been foolish to bet on anyone else but Simone Biles to take home gold in the women’s all-around. But when Biles withdrew from the team finals and all-around competition to focus on her mental health, Lee stepped into the spotlight.

Her gold medal continues the legacy of American dominance in women’s gymnastics and cements her place in the sport’s history.

Other upcoming events are stacked with Olympic athletes who have ties to New England, including the women’s soccer quarterfinals, the women’s basketball matchup, early events for the baseball tournament as well as track and field.

Here’s what’s coming up, who and how to watch:

Mass. boxer competes in women’s lightweight round of 16

> Reporter: HE HAS A NUMBER OF COACHES AND TRAINERS, AND ALEX IS ONE OF THEM. AND HE ALSO HAS AN AMAZING STORY TO TELL. >> OKAY, GUYS, READY. >> Reporter: INSIDE THIS PRIVATE >> Reporter: INSIDE THIS PRIVATE BOXING IN LYNN, ALEX COACHES BOXERS OF ALL AGES AND LEVELS. BOXERS OF ALL AGES AND LEVELS. FROM YOUNG STUDENTS, TO PROFESSIONAL CHAMPIONS, TO OLYMPIANS, INCLUDING LYNN NATIVE RASHIDA ELLIS. HE\u2019S LIVING HIS DREAM. HE\u2019S LIVING HIS DREAM. >> IT\u2019S PERSONAL. THEY\u2019RE LIKE MY KIDS, AND I\u2019M THEY\u2019RE LIKE MY KIDS, AND I\u2019M SORRY TO GET LIKE THIS, BUT THEY MEAN EVERYTHING TO ME. THEY SAVED MY LIFE. >> Reporter: HE OPENED THE >> Reporter: HE OPENED THE STUDIO, BETTER KNOWN AS THE WOLF DEN, ABOUT EIGHT YEARS AGO. BUT HIS DREAM WAS NEVER SUPPOSED TO HAPPEN. TO HAPPEN. >> I HAVE A CRAZY STORY. CRAZY BEAUTIFUL. >> Reporter: YOU SEE, BEFORE ALL OF THIS, HE WAS A NIGHTCLUB OWNER. >> AND SOLD A BUNCH OF DRUGS, A LOT OF DRUGS. >> Reporter: HE GOT BUSTED ABOUT SENT TO PRISON. >> I BECAME SOMEBODY THAT I >> I BECAME SOMEBODY THAT I SHOULDN\u2019T HAVE BEEN. I WAS DESTROYING MY COMMUNITY, DESTROYING FAMILIES. I WAS A PERSON THAT I WAS THE WORST OF THE WORST. >> Reporter: SERVING 15 YEARS TO LIFE. >> I USED TO TELL PEOPLE, I\u2019M NOT DOING LIFE. >> Reporter: ABOUT EIGHT YEARS INTO HIS SENTENCE, HE ASKED GOD FOR A SIGN. FOR A SIGN. >> WHEN I OPENED MY EYES, TRUE STORY, A HAWK CAME DOWN FROM ABOVE. ABOVE. THE HAWK LOOKED AT ME AND TOOK THE HAWK LOOKED AT ME AND TOOK OFF AND LEFT A FEATHER THERE. AND I WAS -- SORRY FOR SWEARING, BUT THIS IS MY MOTHER "F"-ING SIGN, I\u2019M GOING HOME TODAY. TWO DAYS LATER. >> Reporter: SHE IS THE CHEMIST WHO WORKED AT THE DRUG LAB IN BOSTON AND ADMITTED TO BOSTON AND ADMITTED TO FALSIFYING DOZENS OF TESTS IN CRIMINAL CASES. >> WHEN THEY OPENED MY CASE, I WENT HOME THREE DAYS LATER AFTER THAT FEATHER. >> Reporter: HE WENT HOME TO THE CITY OF LYNN. FAST FORWARD TO TODAY. HE HAS SINCE DEDICATED HIS LIFE TO HELPING HIS STUDENTS HERE IN TO HELPING HIS STUDENTS HERE IN THE WOLF DEN. >> THE STUFF ALEX TEACHES US HERE, NOT JUST BOXING. HERE, NOT JUST BOXING. HE TEACHES US TO EXCEL IN EVERY LITTLE THING WE DO. >> AFTER SCHOOL, I COME AND I WANT TO EXCEL IN MY BOXING, MY GOALS, MY DREAMS, AND THIS IS AMAZING. >> Reporter: TO PREVENT THEM FROM GOING DOWN THE SAME PATH HE\u2019S TRAVELED. >> AND I\u2019M OLYMPIC COACH AND WE\u2019RE LOOKING FOR OLYMPIC GOLD. WE\u2019RE LOOKING FOR OLYMPIC GOLD. BUT I WANT KIDS THAT ARE NOT JUST GOING TO BE SUCCESSFUL IN BOXING. I WANT THEM TO BE SUCCESSFUL IN I WANT THEM TO BE SUCCESSFUL IN LIFE. >> Reporter: AND GOING FOR THAT GOLD IS ONCE AGAIN LYNN\u2019S VERY OWN RASHIDA ELLIS. ALEX SAYS THEY WILL BE HAVING A","video_id":"1926852163522_202","video_length":"198832","video_provider":"mpx","alleypack_schedule_unpublish":"","feed_remote_id":"mpx_1926852163522","feed_thumbnail_url":""}' data-livestream="false" data-title="Lynn Boxing Coach Trains Olympians" data-vidcid="1:5:2444649" data-vidurl="https://www.nbcboston.com/news/sports/tokyo-summer-olympics/lynn-boxing-coach-trains-olympians/2444649/" data-islead="false" data-catnames='{"1813":"On Air","1814":"As Seen On","858":"Sports","206944":"News","336366":"Tokyo Olympics"}' data-tagnames='{"6430":"boxing","1977":"Lynn","124":"Massachusetts","389183":"NBC10 in Tokyo","391763":"Rashida Ellis","239903":"Tokyo Olympics"}' data-customdata='{"ContentPartner":"None","Source":"WEBFM","SyndicationAllowed":"true","mSNVideoCategories":"MSN Video v4 Connector-most watched news","mSNVideoContentSupplierID":"NBC_Local","mSNVideoCountry":"us","subtitle":"nosubtitle","uploadedByTeam":"1","youtubeChannel":"None"}' data-autoplay="false" data-cplay="true">

Boxer Rashida Ellis, a Massachusetts native, competed in the women’s lightweight round of 16 Thursday night. Born in Lynn and raised in Boston, the 25-year-old lightweight, named USA Boxing’s 2019 Elite Female Boxer of the Year, made her Olympic debut in Tokyo.

Massachusetts has a rich history in Olympic boxing — and Ellis is adding to it in Tokyo. NBC10 Boston recently visited the Lynn gym where she trains.

Ellis fell to British boxer Caroline Sara Dubois Thursday night in the round of 16.

The full schedule for streaming coverage of Olympic boxing can be found here.

US women’s soccer, including players with New England ties, battle Netherlands in quarterfinals

Two Massachusetts sisters and a Connecticut goalkeeper will play with the U.S. women’s soccer team Friday after the team snuck into the quarterfinals thanks to a draw against Australia Tuesday.

The Olympics are a family affair for Kristie Mewis and Sam Mewis, two sisters and standout soccer players from Hanson, Massachusetts. Born in Weymouth, Kristie went to Boston College and Sam, less than two years younger, went to UCLA. The duo play midfield for the U.S. Women’s National Team, the first appearance for each at the Games. 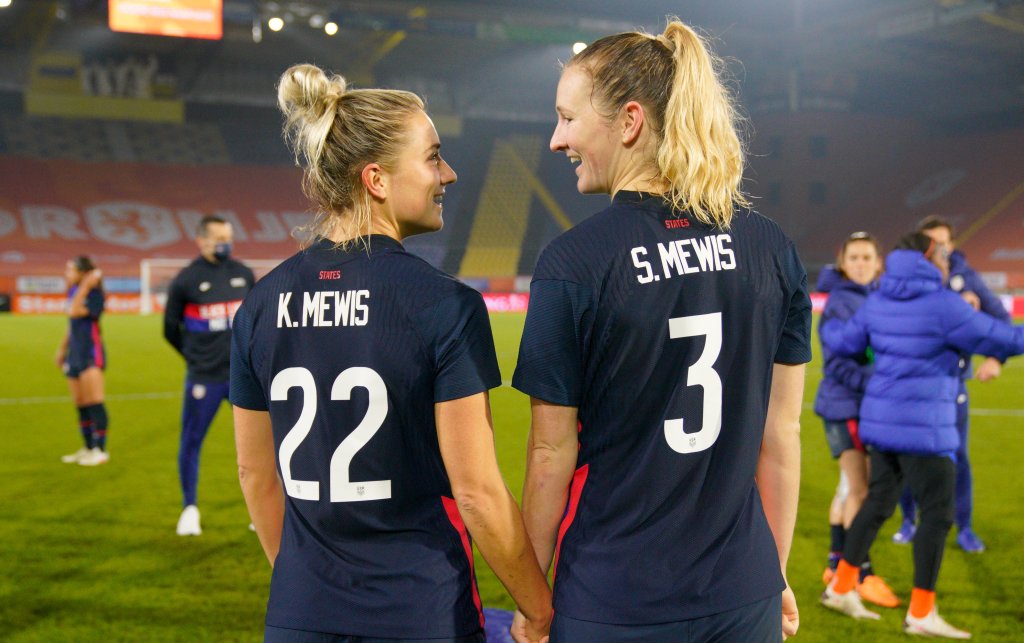 This Nov. 27, 2020, file photo shows sisters Kristie Mewis and Samantha Mewis of the United States celebrate together after their win over the Netherlands at Rat Verlegh Stadion in Breda, Netherlands.

Goalkeeper Alyssa Naeher, a native of Bridgeport, Connecticut, made her first Olympic appearance in Rio and is back in action for the U.S. Women’s National Team in Tokyo.

The Netherlands has been an offensive force in Tokyo. The Dutch women topped Group F with seven points and scored 21 goals in three games. The quarterfinal tilt kicks off at 7 a.m. ET on Friday. Watch the game on NBCSN or Telemundo. Click here for to stream live.

Track and field competition gets off and running, with Maine native among them

The track and field competition in Tokyo begins with a full day of action and a New England native among the athletes.

Rachel Schneider, who is from Sanford, Maine, and went to high school in Dover, New Hampshire, will be running the women’s 5,000-meter in Tokyo, her Olympic debut, shortly after 6 a.m.

Watch the first session in NBC’s primetime coverage, or stream live here. Watch the second session on NBCSN, or click here to stream it live.

The U.S. women’s basketball team puts its 50-game Olympic winning streak on the line against Japan in a Group B matchup at 12:40 a.m. ET on Friday.

The Americans handled Nigeria by a score of 81-72 in their opener on Tuesday. A’ja Wilson led the charge with 19 points and 13 rebounds, while U.S. flag bearer Sue Bird dished out 13 points while being held scoreless. 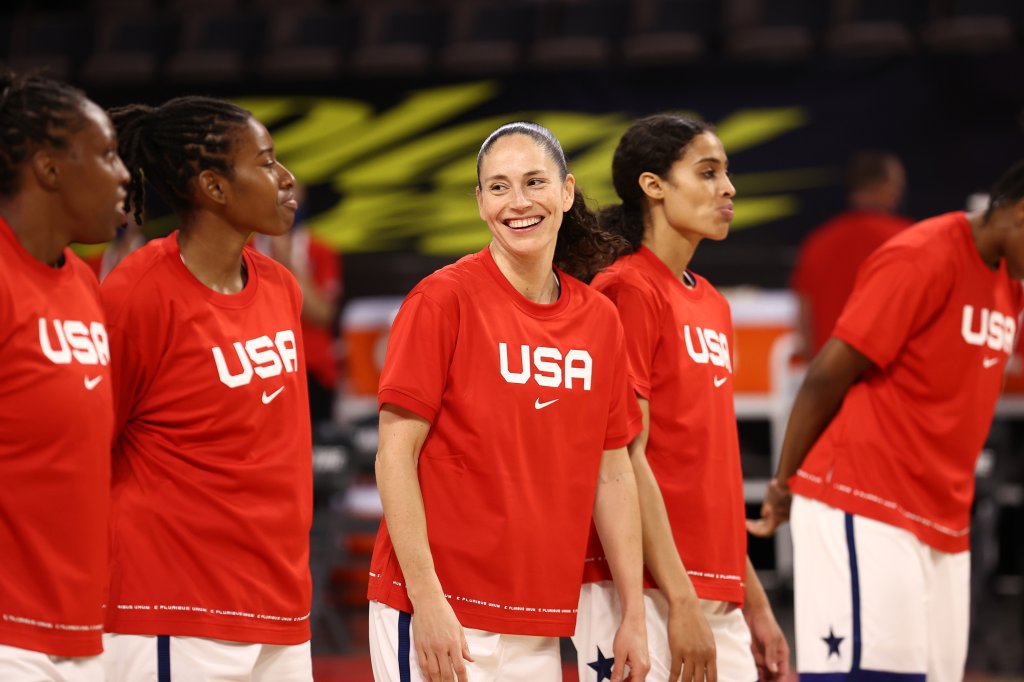 Bird and two of her teammates, Diana Taurasi and Breanna Stewart, all have ties to Connecticut. Bird and Taurasi graduated from UConn in 2002 and 2005, respectively, helping the Huskies to multiple championships. Stewart had quite a college career at the University of Connecticut, winning four NCAA women’s basketball championships in four years.

Team USA is aiming for its seventh straight Olympic gold. The team hasn’t been beaten on the Olympic stage since the semifinals at the 1992 Barcelona Games.

Japan beat France 74-70 in its first Group B contest. Saki Hayashi scored a game-high 12 points for the host nation.

US opens baseball tournament against Israel

Japan started off the Olympic baseball tournament with a bang on Wednesday, beating the Dominican Republic on a walk-off single. On Friday, the U.S. makes its return to the Olympic diamond for the first time since 2008, when it won the bronze medal.

Red Sox infield prospect Triston Casas, currently playing for the Portland Sea Dogs, will be on the U.S. baseball team at the Tokyo Olympics. Boston picked Casas in the first round of the 2018 draft. 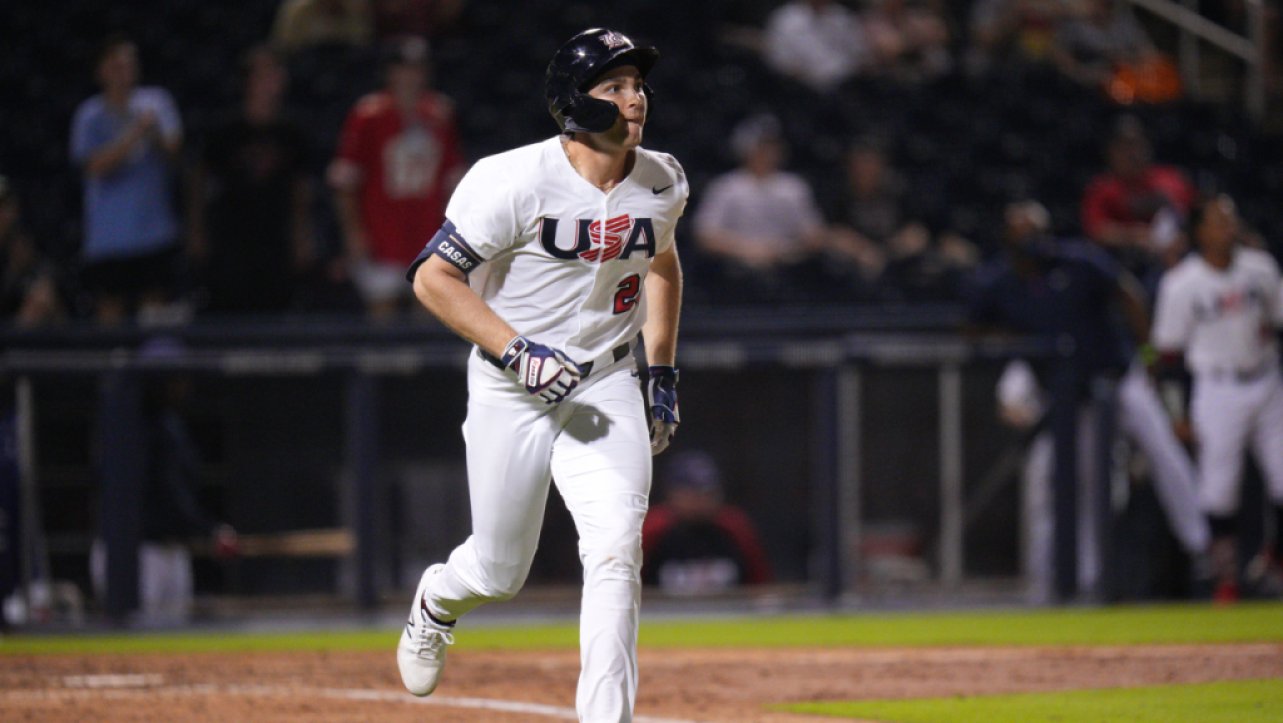 Jack Lopez of the Worcester Red Sox has bounced around the minor leagues since being drafted by the Kansas City Royals in 2012, but will be an Olympian for Team USA in Tokyo.

Additionally, Todd Frazier, Scott Kazmir, Edwin Jackson, Anthony Gose and David Robertson bring MLB experience, while Casas, Simeon Woods Richardson and Shane Baz are promising prospects. Another U.S. star is infielder Eddy Alvarez, who has already been under the Olympic spotlight in Tokyo as one of the American flag bearers for the Opening Ceremony.

Israel’s roster features some notable ex-big leaguers in Ian Kinsler, Danny Valencia and Ty Kelly. The team is ranked No. 24 in the World Baseball Softball Confederation rankings, while the U.S. comes in at No. 4. First pitch between the two sides is at 6 a.m. ET on Friday.

Baseball was a demonstration sport in six Olympics before gaining full-time status in 1992. The sport was then voted off the Olympic program for 2012 and 2016 before being brought back for the 2020 Games. It will be removed from the 2024 slate in Paris, but it could return for the 2028 Games in Los Angeles. 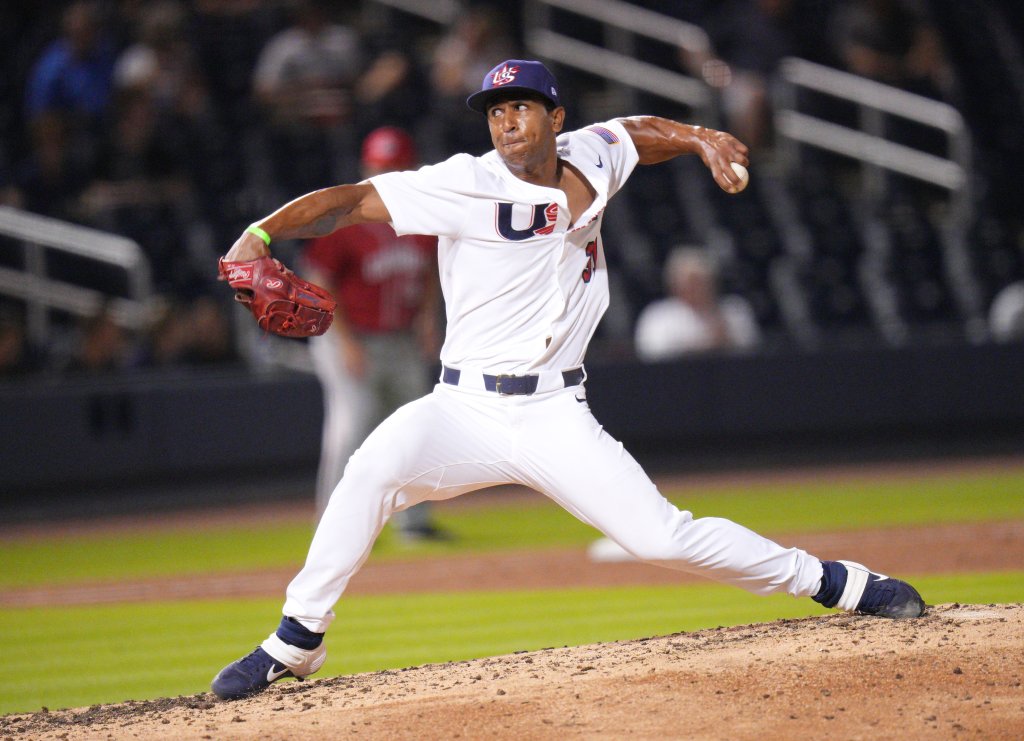 WEST PALM BEACH, FLORIDA – JUNE 04: Anthony Gose #31 of the United States delivers a pitch in the eighth inning against Canada during the WBSC Baseball Americas Qualifier Super Round at The Ballpark of the Palm Beaches on June 04, 2021 in West Palm Beach, Florida. (Photo by Mark Brown/Getty Images) 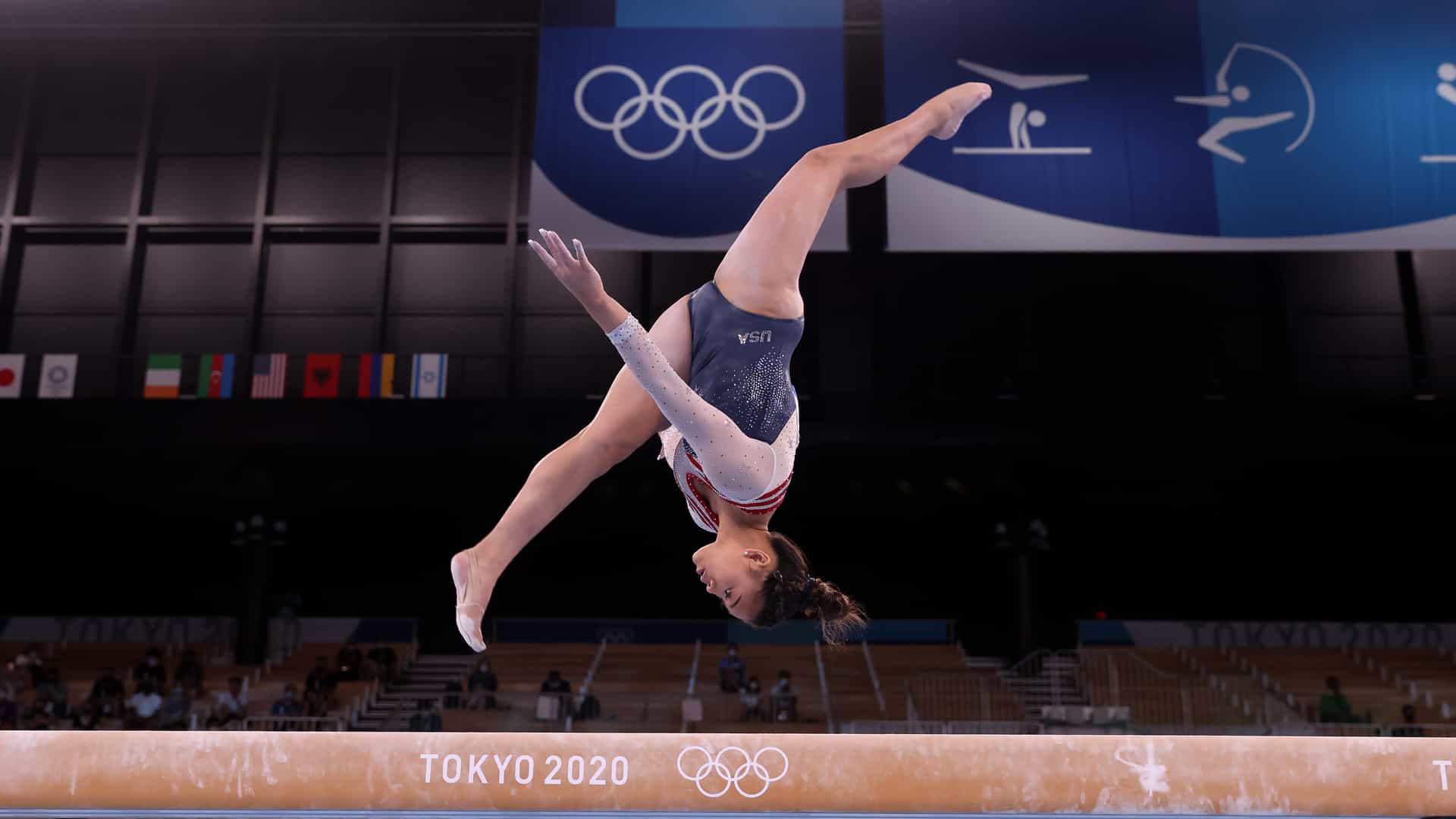 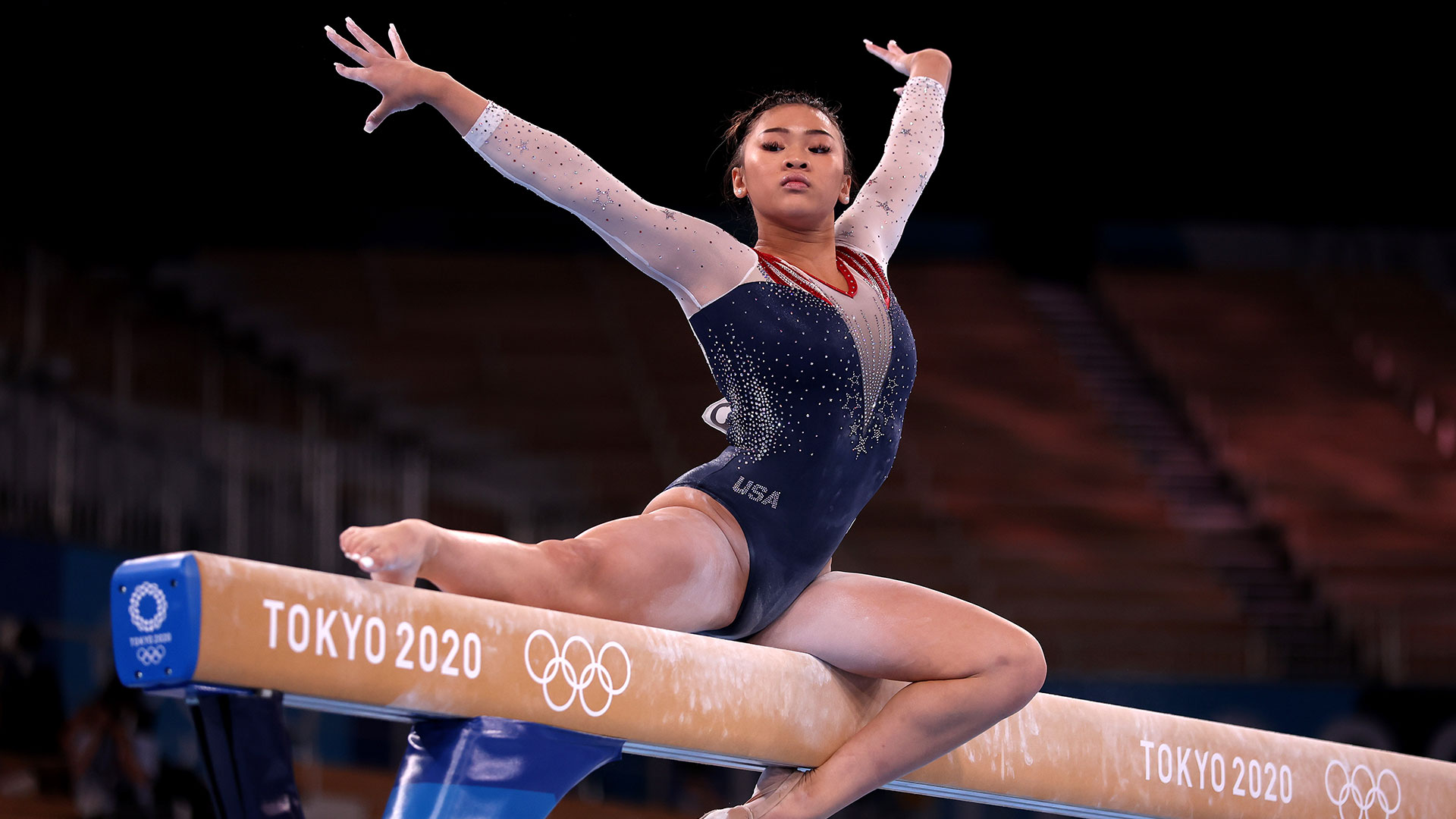