Day 2 of track and field at the Tokyo Olympics has concluded, where the best track and field athletes gathered to continue moving toward the medal podium. Some made their Olympic debuts, eager to prove themselves on the world’s biggest stage.

In the 2016 Rio Olympics, the United States claimed 32 medals in track and field, which included 13 golds. Here’s a look at how Day 2 of track and field unfolded.

In the first track and field event of the evening, the American trio of Anna Cockrell, Sydney McLaughlin and Dalilah Muhammad advanced to the semifinals in the women’s 400m hurdles.

The semifinals will take place on Monday at 7:35 a.m. ET.

Team USA’s Clayton Murphy and Bryce Hoppel have advanced to the semifinals in the men’s 800m. Murphy finished first place in Heat 3 posting a time of 1:45.53 where he took a commanding lead in the final seconds.

Hoppel closed out Heat 6 posting a qualifying time of 1:45.64. Isaiah Jewett did not qualify after falling to fifth place where he posted a time of 1:45.07 in Heat 1.

The semifinals will take place on Sunday at 7:25 a.m. ET. 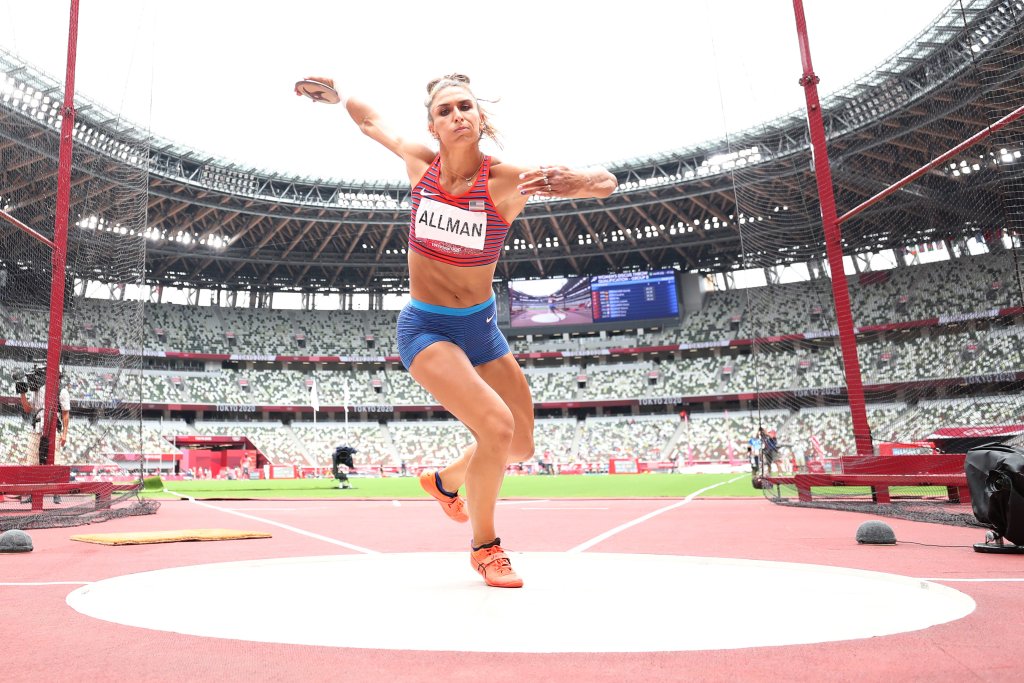 Valarie Allman of Team United States competes in the Women’s Discus Throw Qualification on day eight of the Tokyo 2020 Olympic Games at Olympic Stadium on July 31, 2021, in Tokyo, Japan.

American Valarie Allman is the only member of Team USA to advance to the women’s discus throw final, which will take place on Monday at 7 a.m. ET.

Allman advanced to the final posting a distance of 66.42 on her first attempt in Group B. She not only beat the qualifying distance of 64 meters, but beat everyone who threw before her.

Rachel Dincoff and Kelsey Card finished Group A with final distances of 56.22 and 56.04 respectively but were unable to qualify in the top 12 finishing in 27th and 28th place.

Nilsen and Lightfoot move ahead in men’s pole vault

Both Lightfoot and Nilsen cleared clearing distances of 5.75 meters to qualify for the top 12.

Matthew Ludwig – who arrived in Tokyo nearly 20 hours ago to replace Sam Kendricks – cleared 5.5m in Group B but was unable to make the final 12.

The semifinals will take place on Tuesday at 6:20 a.m. ET.