Dose: Writing on the Wall

Thursday was not a very exciting day for the NBA and it's strange the schedule makers decided to go with so many double-headers while leaving Thursday open. Oh well. The good news is that every series is tied 1-1 and we won’t be getting any sweeps.

The bad news of the day is the Wizards announced John Wall has five non-displaced fractures in his wrist. It’s still unknown if he’s going to miss time, but that does not bode well for the Wizards. Even with Bradley Beal stepping up, it’s hard to like their chances. Let’s start with what we know.

Wall did play through his injury for the entire second half in Game 1 and he did play well. Still, there is a lot of swelling and the team said his wrist is still too swollen to put a timetable on his return. The Wizards have yet to rule him out for Game 3 on Saturday. Wall is expected to speak with the media on Friday and we should have another update at that time.

OK, let’s start guessing. The term “non-displaced fracture” means all of his bones are in alignment. The Wizards have yet to reveal the severity of his wrist injury, so we don't know which bones are dealing with a fracture or even if it's just a small hairline fracture. It could be a finite series of fractures in his wrist and hand bones, or it could be one specific area. Considering he has five non-displaced fractures and the Wizards mentioned he hurt his hand and wrist, he likely suffered damage to the upper part of his wrist and the lower part of his metacarpal bones. Here’s an image via Mayo Clinic of the eight wrist bones meeting the five metacarpal bones:

If I had to guess, I’d say Wall’s done for the year. Almost every time a player gets any sort of wrist fracture at all, he’ll be out six weeks. Although, most of the time, an X-ray will be done at the time of the injury and the diagnosis of a fracture can be ascertained moments later. That’s not always the case, though. In fact, Wall’s teammate, Bradley Beal, didn’t have his diagnosis of a wrist fracture the following day back in October during the preseason. Additionally, there were multiple reports of the Wizards keeping Beal out of the preseason game just as a precautionary. The Wizards did reveal Beal would be out 6-8 weeks the very next day, so not revealing Wall’s prognosis four days later is very, very strange. That probably has a lot to do with how he has so much damage to different places.

Furthermore, the Washington Post ran a terrific story on Wall late on Thursday. They interviewed some doctors to shed some light on the injury. I would highly suggest checking out that story. Here are some key quotes from it:

"It's going to make a big impact on his next two weeks,” David Moss of Washington Orthopedics and Sports Medicine said. “No matter if it’s a bone bruise or if it’s a fracture or if it’s five bones that are fractured or one bone in five places, it’s all going to have an impact short term over the next couple weeks."

Steven S. Shin of Kerlan-Jobe Orthopaedic Clinic in Los Angeles explained the swelling could diminish in a week and Wall could then wear a splint that allows for finger and wrist motion to handle the basketball. Though the injury is to his left (non-shooting) hand, fractures take approximately four to six weeks to heal, Shin said, and non-displaced fractures could become displaced ones, which require longer recovery periods and sometimes surgery.

All that said, this info is just something to chew on before we get the prognosis. We have a lot of guess work on the Player News Page and the previous past couple paragraphs just give you an idea of what a mess injuries can be for players and teams. No injury is the same, but this injury to Wall is easily one of the strangest I’ve ever seen. If the Wall and the Wizards want to risk his offseason plans and jeopardize his long-term health, maybe he plays. We’ll find out more info before Saturday afternoon.

So what do the Wizards do without Wall? It should be Real Deal Bradley Beal time. He said his ankle is 100 percent and he should see some major play-making chances. In the postseason, he hasn’t been shooting the ball well from the field at 38.3 percent. Even with the poor shooting, he’s posted averages of 21.8 points, 5.5 boards, 4.0 assists, 1.7 steals and 2.2 treys. When Beal plays with Wall, he usually is out there on the wing and is playing better off the ball. Now, he’ll be on it more.

One of the more interesting stats on Beal was that only 13 percent of his shots in Game 2 were catch-and-shoot treys. In the regular season, those shots accounted for 30.4 percent of his shot total. Also, when Beal is not on the court with Wall this season, he posted a 28.0 usage rate and a 20.2 assist percentage in his minutes without Wall. Coincidentally, his usage rate was 28.0 in Game 2. On the downside in the Game 2 loss, Beal missed all seven shots from the field in which he dribbled three or more times. Plus, Beal was only wide open (six-plus feet away from a defender) for just two of his 22 shots from the field (made both). He’ll need to be better there and coach Wittman will have to draw stuff up for him. Here’s a look at his shot chart: 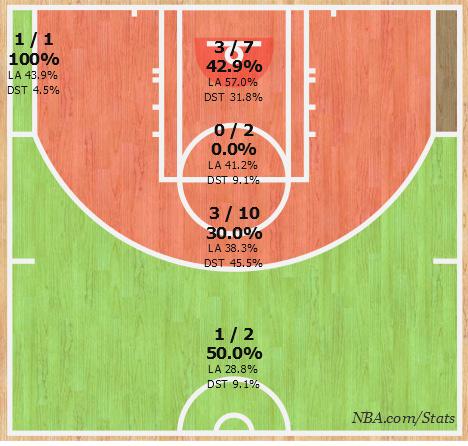 The shot distribution isn’t that bad outside of too many mid-range jumpers. That usually is the underlying theme on Beal during the times he goes into a slump. The Wizards haven’t quite thrived on Beal PNRs just yet and maybe he’ll be better. His upside is as high as anyone on Saturday, but there’s going to be a lot of risk because he hasn’t been able to get open. For DFS, I’d definitely consider using him in GPP and probably in cash games, too.

Besides Beal, we should see more of Garrett Temple, Ramon Sessions and Will Bynum at the point. Sessions easily had the best game on Tuesday with 21 points in 40 minutes, so he’s your guy to use in most formats. I haven’t been impressed with Jeff Teague’s defense lately either.  I'd also expect to see a lot more of Marcin Gortat getting the ball on PNR.

That was pretty much it for the news on Thursday. Chris Paul went through a workout and the Clippers will probably be more inclined to playing him in Game 3 now that they’ve lost some momentum. His status is still uncertain and he is a little closer to doubtful for now.

The Cavs are really starting to tweak their rotation. J.R. Smith is going to come back and he should soak up a big chunk of the wing minutes. He’ll likely play a lot at small forward, too. Before we get to Friday, let’s go over what happened on Wednesday with their rotation/lineups: 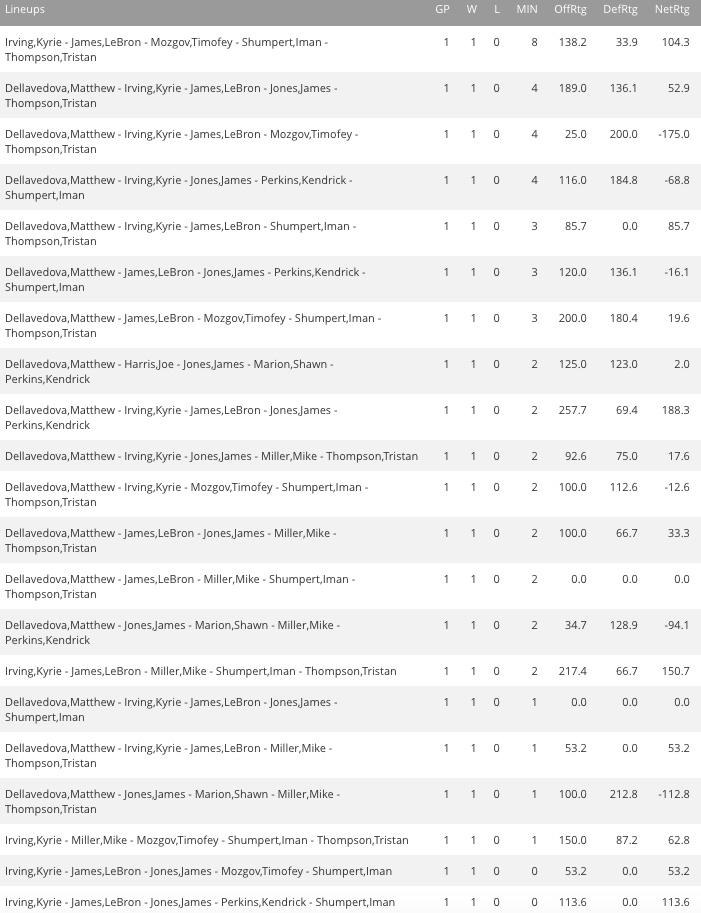 Yes, that’s 21 different lineups and coach David Blatt really mixed it up. Most importantly, their most used lineup put up a net rating of 104.3, which is a very solid offensive rating by itself. They destroyed the Bulls with that lineup and crushed them in the paint. Needless to say, the Cavs are likely going to use the Thompson-Mozgov combo in their frontcourt. J.R. Smith should basically take minutes from Iman Shumpert, who might even be out with a groin injury.

As you can see, the of the biggest difference from the Cavs playing well has been Tristan Thompson. He’s still not really much of a scorer, but he deserves some credit for his rebounding ability. Perhaps the biggest difference for the Cavs is how much better they’re rebounding the ball. In fact, the Cavs have a total rebounding rate of 55.3 when Thompson is on the court compared to 40.0 when he’s off during this series. Their net rating is also 53.8 points better with Tristan overall in these two games. That is ridiculously impressive.

We can probably expect Tristan to get more than 36 minutes going forward. On Wednesday, he played 35 minutes, but don’t forget the Cavs have to make room for J.R. Smith. Expect Thompson, Kyrie Irving, LeBron James and J.R. Smith to do most of the work with more minutes. Even though James Jones looked great, he won’t be needed quite as much with Swish back. The Bulls have their work cut out for themselves. Most importantly, LeBron is going to eat again.