If you're not watching the Alabama/Georgia football game tonight, you'll have plenty of viewing alternatives with eight games on the NBA slate. Here's a look at Vegas' expectations for tonight's slate:

And before we look at individual players, here is an overview of how easy or difficult those 16 teams have been vs. each position over the past month. The numbers reflect actual FanDuel points allowed to players who qualify at each position...higher number equate to easier matchups, and vice versa. 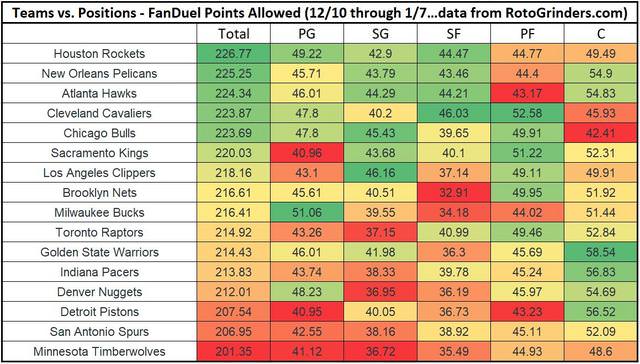 With those numbers in mind, let's proceed to some affordable players who should hit 5x value or higher tonight.

Nikola Mirotic (PF, $6.5k) is doubtful to play on Monday, which should leave Bobby Portis (PF, $4.5k) with a golden opportunity. He's likely to earn solid minutes at both PF and C tonight, against a Rockets team that's giving up the most FanDuel points of any active team tonight. They haven't been particularly easy for PFs, but Portis' cheap price and the pace of this game both bode very well.

The Clippers will be playing without Austin Rivers (heel) and Danilo Gallinari (glute) on Monday, while both Blake Griffin (concussion) and Milos Teodosic (plantar fasciitis) are also doubtful at best. They could be down four starters, in other words, and it'll once again be all-hands-on-deck in the rotation. Montrezl Harrell (PF, $4.9k) is a high-risk, high-reward option, as the Clippers turned to him extensively after Blake's injury on Saturday -- he finished with nine points, 10 rebounds, three assists and two blocks, good enough for 26.5 FanDuel points. His price spiked overnight, which is unfortunate, but he's an interesting pivot if you're fading the ultra-chalky Bobby Portis in a tournament.

The Spurs' lineup continues to be a nightly carousel, and tonight they've ruled out Danny Green (groin), Kawhi Leonard (shoulder) and Manu Ginobili (rest). Dejounte Murray should head back to the bench with Tony Parker returning tonight, but Bryn Forbes (SG, $3.5k) and Kyle Anderson (SF, $5.7k) look safe in the starting lineup. Both guys figured to play heavy minutes tonight, especially with Rudy Gay (heel) still unavailable, and the Kings aren't exactly an intimidating matchup. They'll also be playing without George Hill, one of their better backcourt defenders, with gives Forbes an added boost.

Another opportunistic play is Joe Harris (SF, $3.7), who remains dirt-cheap despite likely starting tonight's game in the absence of DeMarre Carroll (knee). It's not an enticing matchup vs. the Raptors, but again, this is a situation where Harris' price and opportunity outweighs the fact that Toronto has been tough against SGs and decent vs. SFs. In four starts this season, Harris has averaged 10.0 points, 4.0 rebounds, 1.0 assists, 0.3 steals and 0.3 blocks, with 1.3 turnovers. That's a modest 16.8 FanDuel points, which is 4.5x value, but he's coming off two strong games and would benefit if Caris LeVert (groin) is limited at all limited as a precaution.

I'll wrap up with a note about De'Aaron Fox (PG, $5.5k). San Antonio's team defense is rock-solid and they're one of the worst teams to face in DFS -- among the 16 teams active tonight, they give up the fourth-fewest DFS points to PGs, and the second-fewest points overall. That said, George Hill (personal) and Frank Mason (heel) are both out of commission, so there's still a good chance Fox hits 5x value or higher. He's averaging 28.9 FanDuel points over the past two games, in 33.0 minutes, and should be in that range again vs. the short-handed Spurs. Matchups are very important, but opportunity is often a trump card.