There are seven games in the NBA tonight, and myriad opportunities to find DFS value thanks to injuries, changing roles, and the vagaries of the trade deadline. Let's first look at Vegas' expectations:

We should also take an objective glance at how easy or difficult tonight’s active teams have been for opposing players. This data covers the past month (Jan. 1 – Feb. 1) and is specific to the NBA’s official points-league scoring…identical to FanDuel. The data comes from RotoGrinders, which calculates points allowed to positions based on the actual designation from FanDuel – e.g. if Carmelo Anthony is listed at PF but actually plays SF one night because Paul George is out, he’s still counted at the PF position. 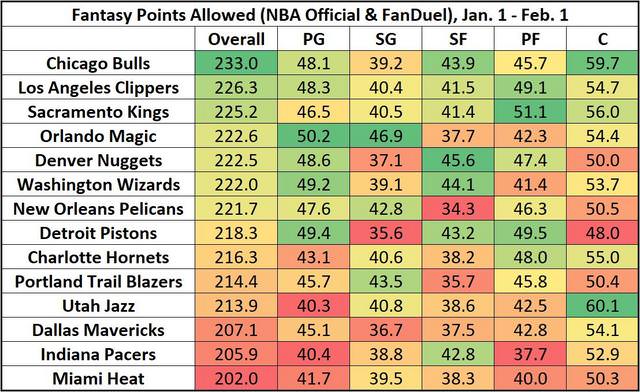 There’s a lot to consider there, but one thing that jumps out is Utah allowing a ton of DFS points to opposing centers. That seems very odd for a team anchored by Rudy Gobert, but the numbers don’t lie – only Brooklyn and Atlanta have been more lenient vs. centers for the past four weeks.

With those numbers in mind, let’s discuss individual bargains who fall below $6.0k on FanDuel tonight – preferably far below. As usual, injuries and lineup tweaks are crucial and DFS owners should always monitor news until the moment lineups lock!

The Bulls vs. Kings game should be a mess, but there’s value to be gleaned here. Both teams are prime DFS targets at nearly every position, so it’s all about minutes and usage. Lauri Markkanen is out again because his flight was cancelled – the Bulls could almost definitely have booked him another flight, of course, but it’s not like they’re actually trying to win games. That should lead to another start for Paul Zipser (SF, $3.7k), who played 26 minutes on Saturday to finish with 25.0 FanDuel points. He’s not exactly trustworthy, but he and Bobby Portis (PF, $5.8k) are both on the board with expanded minutes a near certainty.

Harrison Barnes (ankle) will miss his first game of the season on Monday, so we don’t have a clear sense what coach Rick Carlisle will do in his absence. They’ve been starting Dirk Nowitzki (PF, $5.2k) alongside Dwight Powell (PF, $4.8k) lately so it’s hard to envision Maxi Kleber (PF, $3.6k) being a practical choice – if I’m touching one of the Mavs’ PFs tonight, it will be Powell. More likely is Wes Matthews (SG, $5.5k) shifting up to SF with Yogi Ferrell (PG, $4.1k) entering the starting lineup. More minutes and shots should filter throughout the lineup, but Ferrell is the guy I’ll be targeting for opportunistic value.

Langston Galloway ($PG, 3.6k) is a solid punt option at PG tonight – with Avery Bradley out of town and Dwight Buycks (illness) unavailable, he’s basically a lock for 20+ minutes. Galloway has logged at least 20 minutes eight times this season, and in seven of those games he’s notched at least 19.1 FanDuel points. He only needs 18.0 to hit 5x value, and it’s not as though Portland is a daunting matchup for opposing guards.

Speaking of which, it’s easy to like Reggie Bullock (SF, $4.4k) tonight – Portland has been rough for opposing SFs, which is Bullock’s listed position on FanDuel, but he’s just as likely to play a lot of SG. No matter which position he’s slotting into, he’s logged 30+ minutes in five straight games and should get a similar workload tonight. And if Luke Kennard (foot) can’t go tonight, Bullock, Galloway and Stanley Johnson (SF, $5.7k) become even more enticing.

Darren Collison (bruised knee) and Victor Oladipo (illness) are both questionable to play vs. Washington tonight, which opens a bunch of possibilities. This is simply a situation to monitor as lineup locks approach, but if one or both players are out, we can expect Lance Stephenson (SF, $4.4k) and Cory Joseph (PG, $3.9k) to be very busy with the ball in their hands. Myles Turner (knee) is also questionable tonight, and his absence is always a big boost for Domantas Sabonis (PF, $6.3k), so keep a very close eye on Indiana’s roster prior to the 7pm tipoff.

Another injury-specific team to monitor is the Blazers, who have Evan Turner (left calf) and Shabazz Napier (sore big toe) both listed as questionable tonight. Moe Harkless (SF, $3.5k) resurfaced with a big game on Sunday, putting up 31.6 FanDuel points in 31 minutes, and he’s as cheap as they come. If Bazz and/or Turner sit out, Harkless should be at the top of your ‘punt’ list – Pat Connaughton (SG, $3.5k) would also be worth a glance.