The process here is simple. Use Vegas lines to predict scores and game script. Use S&P+ to find where offenses will attack opposing defenses. And use Rotoworld blurbs to track news and depth chart changes. By doing these three things, we can build a quality player pool to build rosters with.

In this column, I’ll go team-by-team (going from the highest implied team total to the lowest) and write up the players who have the highest probability of 4x-ing their DraftKings salary. If I’m on the border of a player, then I write their name next to “Fringe Plays.” And if you don’t see the player listed, then you can assume I am fading them completely. If you want an explanation, please send me a message on Twitter (@Haydenwinks).

The link to the targets and the last three weeks data: http://bit.ly/CFBtargets 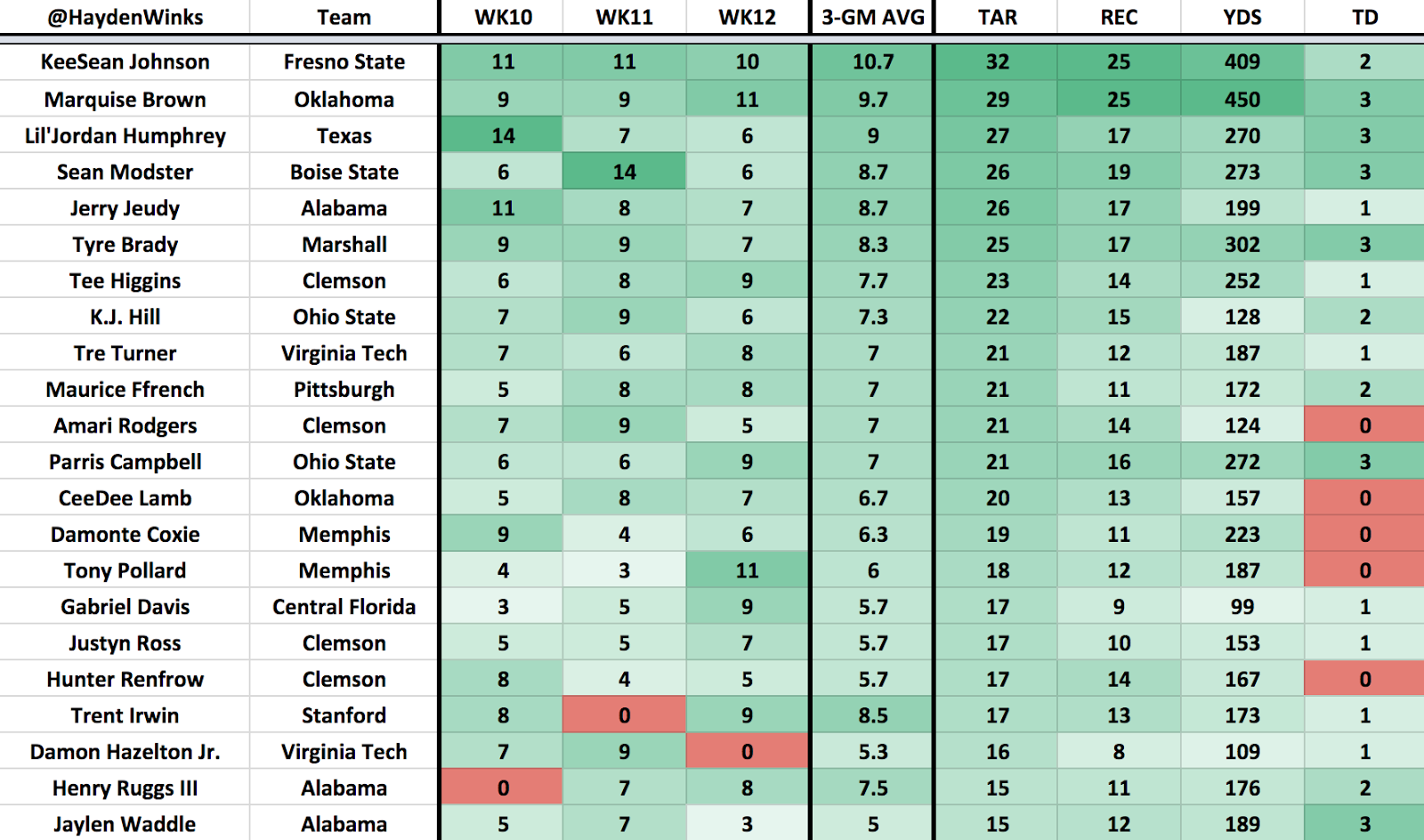 The last time QB Kyler Murray ($10,300) played Texas, he scored 44.4 DK points or 4.3x-ed his current salary. With a College Football Playoff berth at stake, it’s hard not to expect another big game from the Heisman Hopeful. Even if he scores just 33 DK points -- that’s way below his average -- Murray could very well be in the tournament-winning lineup. Fade at your own risk. … After being slowed by an injury in October/November, WR Marquise Brown ($7,700) popped for 50 DK points last week, which gives him six games with over 28 DK points. No other receiver on the slate has as much upside as Brown, who ripped the Longhorns apart for 9-131-2 in Week 6. He has the most receiving yards on the slate over the last three weeks (450). … WR CeeDee Lamb ($6,200) arguably has the second most upside on the slate, but he’s not in the same ballpark as Brown. Lamb is still very much in play in tournaments, but it’s best to find the $1,500 to get from Lamb to Brown in most lineups. … RB Kennedy Brooks ($7,500) has scored six touchdowns in the last three games as he’s taken over a larger role down the stretch. With the insane team implied team total, it’s going to be hard to fade Brooks, but it may be hard to fit him in if we are jamming in Murray and Brown. … Fringe Plays: WR Lee Morris ($4,300), WR Grant Calcaterra ($3,900), RB Trey Sermon ($4,700).

RB Travis Etienne ($8,700) is averaging 23.8 DK points per week -- that’s 2.74x-ing his current salary on average -- but this should be more of a ceiling game with the huge point spread and a College Football Playoff berth on the line. Etienne offers both ceiling and floor. … WR Tee Higgins ($6,400) is coming off a 29 DK-point performance last week -- that’s his fourth 20+ DK point game -- and the Pitt secondary shouldn’t be much of a barrier. As always, the concern with Lawrence and the pass catchers is the game script. Will Clemson be piling on points through the air in the second half if they jump out to a big lead? … WR Amari Rodgers ($5,800) has the most targets for a receiver who hasn’t scored a touchdown in the last three weeks. There is some positive touchdown regression coming his way and Clemson’s 39.5-point implied team total should do the trick. …  Fringe Plays: QB Trevor Lawrence ($8,200), WR Justyn Ross ($5,600), WR Hunter Renfrow ($4,300), RB Adam Choice ($3,900).

Georgia’s pass defense doesn’t mess around, but do you think Tua cares? Of course not. I’m expecting more fireworks from the stud quarterback and it comes at a sweet $1,300 discount. Tua has 4x-ed his current salary in back-to-back weeks. Building lineups with Murray and Tua could be tournament-winning if the lower priced options can hit. … WR Henry Ruggs ($5,400) has nearly 3x-ed his current salary on average this season, and he will get a full complement of snaps this week, which is something we couldn’t expect for much of the season. … Fringe Plays: WR Jerry Jeudy ($6,600), WR Jaylen Waddle ($4,900), WR Irv Smith ($4,500), RB Josh Jacobs ($5,400), RB Damien Harris ($5,200).

QB Dwayne Haskins ($9,200) has hung nearly 100 DK points in the last two weeks, including launching six touchdowns against Michigan last week. That upside is tough to ignore, especially since his salary raised a whole $200. The decision between Murray, Tua, Ehlinger, and Haskins will likely make or break the week. Spreading out tournament allocations would be risk averse, but it could be optimal with how close their ceilings are. … I want to be on the record saying WR Parris Campbell ($6,700) is an underrated NFL prospect. His athleticism pops whenever the ball is in his hands, and that athleticism is what I like to chase in DFS tournaments. Campbell also offers a decent floor. He’s a great stack in Haskins lineups. For what it’s worth, the Haskins-Campbell stack is $1,700 cheaper than the Murray-Brown one. … RB J.K. Dobbins ($6,300) couldn’t find the end zone last week with Haskins’ outlier touchdown performance, but this game is setting up as a buy-low spot for the Buckeye back who has nine touchdowns on the season. Pitt’s run funnel defense and the 14-point point spread are all working in Dobbins’ favor. … The same arguments for Dobbins can be made for RB Mike Weber ($5,300), but Weber hasn’t seen as much work as Dobbins this season which explains the $1,000 salary difference.  … Fringe Plays: WR K.J. Hill ($5,500), WR Terry McLaurin ($5,300), WR Johnnie Dixon ($5,00), WR Chris Olvae ($3,400).

QB Sam Ehlinger ($9,000) popped for 50 DK points the last time he played the Sooners, and Vegas and S&P+ are expecting another shootout. Ehlinger’s chances of getting to the 300-yard bonus are high, but he will need three touchdowns to really pay off his price. Excluding the game he was injured in, Ehlinger has at least three total touchdowns in five of the last six games. Ehlinger deserves to be in the same class as Tua and Haskins this week for fantasy. … WR Lil’Jordan Humphrey ($7,400) has dominated in the slot this season, and he went for 36 DK points the last time he faced the Sooners’ “defense.” The only thing going against Humphrey this week is his salary compared to Marquise Brown. For $300 more, we can get a player averaging 4 more DK points per week despite playing at three-quarters speed for multiple weeks of the season. … WR Devin Duvernay ($4,600) has been quiet the last two weeks with the Longhorns only scoring 24 points in each game, but he offers a 4 to 5x ceiling in this shootout at his discounted price. Duvernay will most likely need to score a touchdown to get there, so he’s a recommended Ehlinger-stack option. … Fringe Plays: WR Collin Johnson ($6,000), RB Keaontay Ingram ($5,900), RB Tre Watson ($5,300).

It’s unfortunate that we don’t get to watch McKenzie Milton this weekend and we, of course, are wishing him the best in his recovery. He’s shown the right attitude for his entire career, so I’m optimistic that he will make the most of an unfortunate situation. … Milton’s absence does make this game much harder to predict. It seems obvious that UCF will try to run the ball like crazy, but the S&P+ suggests that passing would be a better strategy, assuming that QB Darriel Mack is a capable passer. I’m not going to pretend like I have scouted Mack, so your guess is as good as mine. I will argue that the Knights disregard the S&P+ and #EstablishTheRun, so I’ll be fading Mack and paying up on the quarterback studs. … RB Greg McCrae ($7,000) has plenty of touchdown equity given the team implied total (34) and his five-game touchdown streak. But he’s going to need to score multiple touchdowns and hit the 100-yard bonus for him to pay off his elevated price. McCrae is just a tournament option. …   Fringe Plays: WR Gabriel Davis ($4,800), RB Taj McGowan ($3,900).

Would you rather have a running back playing as an underdog against a solid defense, or would you rather play Heisman-level quarterbacks? That’s the decision with RB Darrell Henderson ($9,500). It seems like an easy decision to me. … WR Damonte Coxie ($5,700) has the most yards in the last three weeks on the slate without a touchdown, so he’s likely underpriced with positive touchdown regression coming his way. … Fringe Plays: RB Patrick Taylor ($6,700), RB Tony Pollard ($5,500), WR Joey Magnifico ($3,900).

RB Steven Peoples ($4,800) has been in a touchdown drought, but he brings a reasonable workload to the table and the Virginia Tech implied team total is high enough for Peoples to have decent touchdown equity. Peoples is a mediocre tournament option. … WR Tre Turner ($4,300) has 21 targets over the last three weeks, which is the ninth on the slate. All of the receivers ahead of him are more expensive. … WR Phil Patterson ($3,000) saw eight targets two games ago, but didn’t get a single one last week. Play at your own risk. ... Injury Notes: WR Damon Hazelton is dealing with an undisclosed injury that kept him out of the passing attack last week. He easily could play as a receiver this week, but proceed at your own caution unless new reports surface. … Fringe Plays: WR Eric Kumah ($4,400), RB Deshawn McClease ($3,700).

WR Sean Modster ($6,100) and the passing offense might be asked to do more this week after the running back saw 37 carries last week and with Fresno State playing awesome run defense this year. If that’s the case, then Modster is in line to benefit the most. Modster is just one week removed from a 43 DK-point performance. … RB Alexander Mattison ($7,800) was the dude given 37 carries last week, so it’s obvious that Boise State wants to give him the rock, but how healthy could he be after that? This is a rare spot where heavy volume is a little concerning for me, but the real concern is Fresno State’s fourth-ranked run defense. I’ll be on #TeamFade here but I wouldn’t be too surprised if he makes me look foolish. …  Fringe Plays: QB Brett Rypien ($7,100), WR A.J. Richardson ($5,400), WR C.T. Thomas ($4,000) but there are two other receivers who missed last week who could play and ruin Richardson and Thomas’ outlook as the No. 2 and No. 3 options behind Modster.

WR KeeSean Johnson ($6,900) has been the most targeted receiver on the slate over the last three games (32), so he will bring a higher floor than a lot of the receivers in this price range. Johnson also brings a ceiling highlighted by his three games with over 30 DK points. Johnson is one of the few options I like among the players on teams not expected to score 30+ points this Saturday. ...  Fringe Plays: QB Marcus McMaryion ($6,500), WR Jared Rice ($4,200), RB Ronnie Rivers ($5,600).

I really don’t want to waste a S-FLEX spot on a low-end quarterback, but it’s hard to ignore QB Clayton Thorson ($4,900) at this low price tag. Thorson has 7x upside if everything -- emphasis on everything --  goes right. He’s done it before (vs. Michigan State) and game script will be in his favor. The Ohio State secondary also isn’t as scary as the name would indicate, so there is a case to be made on taking the savings with Thorson at the S-FLEX spot. Thorson’s outlook would be slightly better if WR Flynn Nagel is cleared to play with his leg injury… Injury Notes: WR Flynn Nagel ($5,200) would be the stack with Thorson if he can play though the leg injury that caused him to miss last week. His status is uncertain, but I’m sure they will do everything to get him out there for one of the biggest Northwestern football games in the school’s recent history. … Fringe Plays: RB Isaiah Bowser ($5,800), WR Bennett Skowronek ($3,500), WR Riley Lees ($3,000).

We can’t play anyone with this implied total.