Don’t get too comfortable. DraftKings just made big changes to “Tiers.” It’s now called “Tiers: Man of the Match” and instead of picking players across all games, we now will select one player for each game in each bin. For example, Tier 1 used to be all of the elite quarterbacks, but Tier 1 is now all the best players from the game with the most fantasy goodness. This week’s Tier 1 includes: Matt Ryan, Davante Adams, Julio Jones, Aaron Rodgers, Aaron Jones, and Calvin Ridley from the Falcons and Packers game. That’s the only difference since the scoring is the same and there’s still no salary restrictions. … So we just pick the quarterbacks or stud running backs and print money right???

Ehhhhhh. Not really. … This game mode -- for tournaments at least -- is going to come down to expected points and expected ownership. Remember, the goal isn’t to maximize points, it’s to maximize dollars. There is a difference, and it boils down to leveraging ownership. The simplest way to think about the strategy is this:

So there are two things I will go over in this column for as long as DraftKings keeps this format: 1) Ranking players based on probability to score the most points in the tier, and 2) ranking players based on projected ownership. The first part will be easier to nail down initially because ownership could be all over the place with everyone trying to figure out optimal strategies, but it makes the strategy the important part of this game mode.

Feel free to reach out to me on Twitter (@HaydenWinks) if you have questions about the game mode or about this slate. I’ll be posting updates at the top of the page, so make sure to revisit the link before lock. But let’s dive in to the Week 14 slate.

The ‘Winks’ column is my tournament rankings, and the ‘Ownership’ colum is my rankings of projected ownership. Once I see how ownership is spread out, these will be percentages instead of rankings. Working in percentages is good for #TheProcess for which we trust. … The ‘Daughtery’ column comes from RotoPat’s weekly Rankings piece, and the ‘Hribar’ column comes from Reeb’s weekly Worksheet. Neither are specifically designed with Tiers in mind, but are valuable nonetheless. … The ‘Salary’ comes from DraftKings’ Classic format. The ‘Team WP’ (winning percentage) is the percentage of weeks that player has beat the other players on his own team. The higher the number,  the more times the player has outscored his teammates. To be clear, it’s the percentage of his own team, not the percentage of beating the entire tier.

The Tiers Winning Percentage -- the percentage of 2018 weeks a player has outscored the player’s teammates listed by DraftKings (just know it’s good when the number is high) -- for the Atlanta Falcons: Matt Ryan (58%), Julio Jones (33%), and Calvin Ridley (8%). … Ryan has won the most weeks on the season, but Julio Jones has won three of the last four weeks. The true probability of winning this matchup is probably close to even between Ryan and Jones (45-50% for each) with a long shot chance of Ridley winning -- It’s hard for second receiver options to outscore the quarterback.

The Tiers Winning Percentage for the Green Bay Packers since Week 8 when Jones was more involved: Davante Adams (50%), Aaron Jones (33%), and Aaron Rodgers (17%). … Since so much of Rodgers production goes to Davante Adams (look at the graph below), it’s hard for Rodgers to score more DK points than him, so I anticipate Rodgers being more owned than his true probability of winning Tier 1. On the flip side, I think Aaron Jones will be under owned compared to his true probability of winning Tier 1. 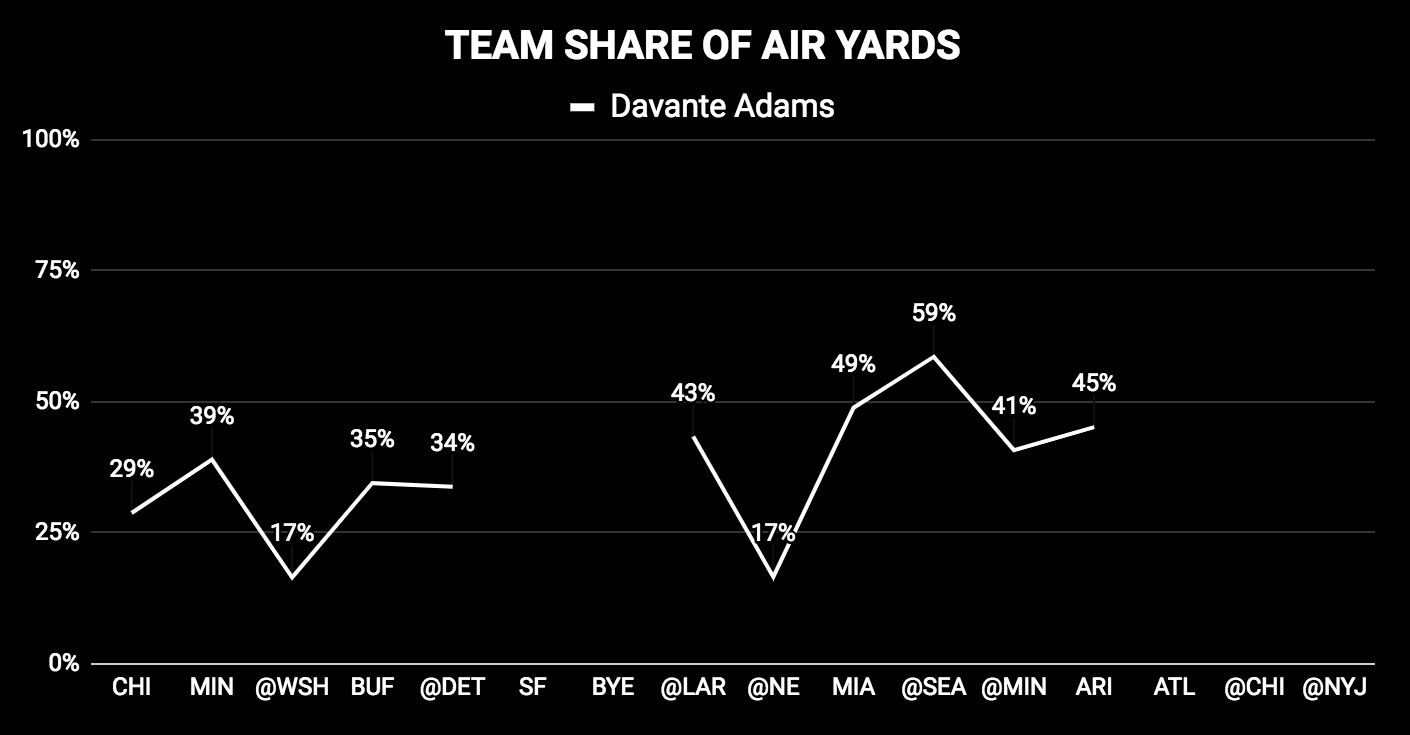 The Tiers Winning Percentage for the Cleveland Browns since Week 7 when Nick Chubb was more involved: Baker Mayfield (50%), Nick Chubb (33%), and Jarvis Landry (17%). … The bottom line for the Browns is it’s going to be hard to outscore Cam Newton.

The Tiers Winning Percentage for the Carolina Panthers: Cam Newton (92%), D.J. Moore (8%), and Devin Funchess (0%). … Moore certainly has a little more equity than that now that his team share of Air Yards looks like this (look at the graph below), but this is very much the Cam Newton show. 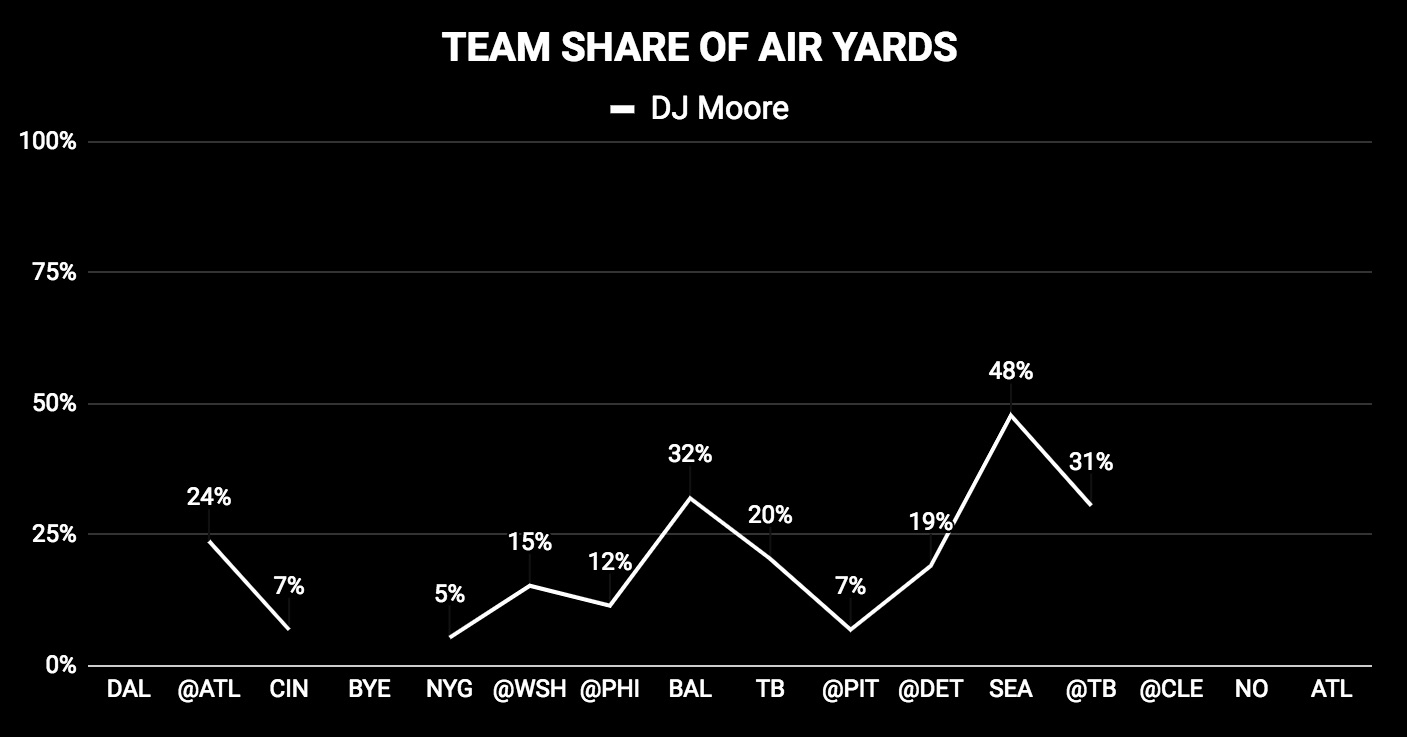 The Tiers Winning Percentage for the Baltimore Ravens in Lamar Jackson’s three starts: Lamar Jackson (66%), Gus Edwards (33%), and John Brown (0%). … If there was a bigger sample, I’d proJ.C. Jackson’s percentage to be over 80% with Brown’s still staying close to 0.

The Tiers Winning Percentage for the Kansas City Chiefs: Patrick Mahomes (58%), Tyreek Hill (33%), and Travis Kelce (8%). … All of those percentages need to be lowered when factoring in Spencer Ware’s equity, but Ware will be hard pressed to get the 25-40 DK points needed to lead the Chiefs in scoring. The biggest takeaway for the Chiefs is the difference between average fantasy points (nearly worthless) and weekly wins -- Just look at the peaks in the graph below. Mahomes looks like a lock if we only look at his 31-DK-point average compared to Hill’s 23-DK-point average. For this reason, it’s best to have less exposure to Mahomes relative to the field, which easily could be 40% or more. 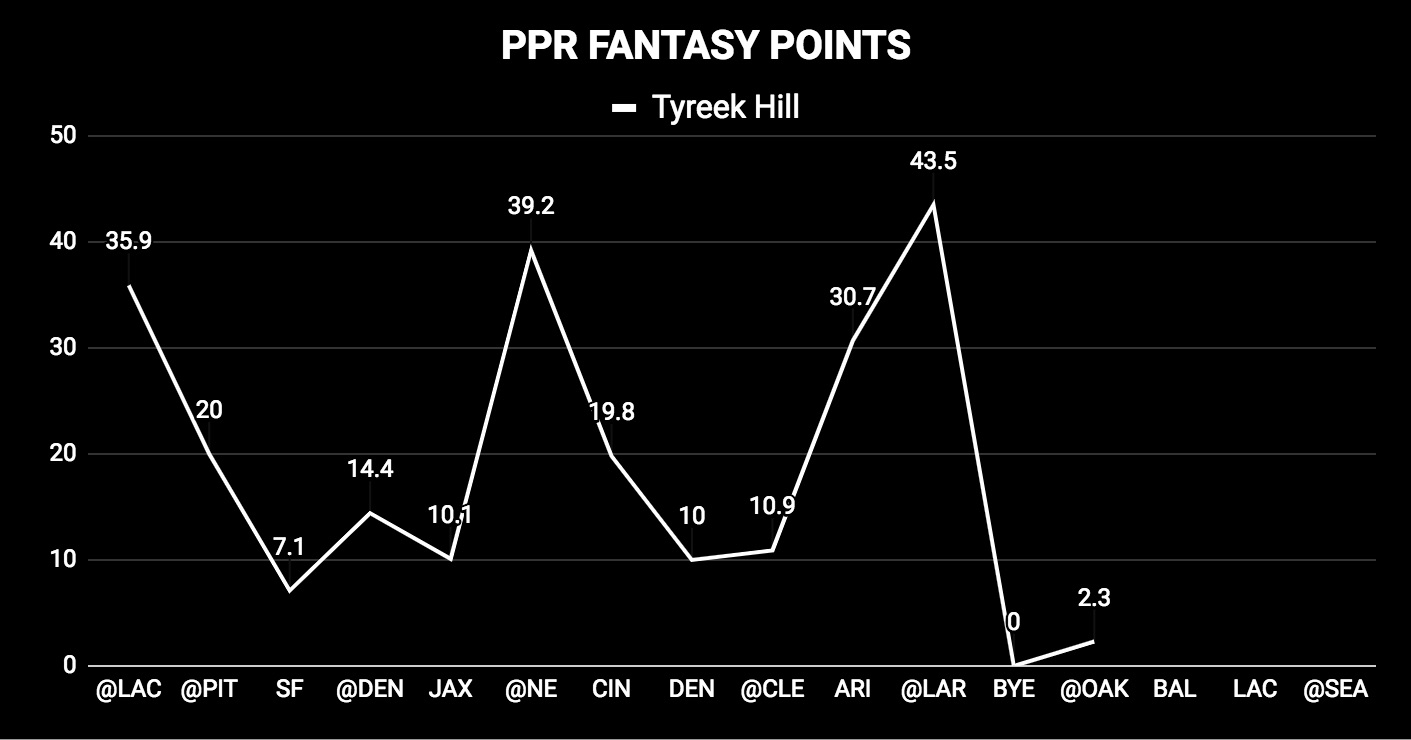 The Tiers Winning Percentage for the Houston Texans: DeAndre Hopkins (58%), Deshaun Watson (33%), Lamar Miller (8%), Demaryius Thomas (0%). … It’s only been a few games, so Thomas’ actual probability will be a tad higher, but he’s still nearly irrelevant here. DeAndre Hopkins and Deshaun Watson are clearly  ahead of Miller and Thomas, with Hopkins winning six of the last nine weeks.

The Tiers Winning Percentage for the Indianapolis Colts in the six games all four players played in: Marlon Mack (33%), Eric Ebron (33%), Andrew Luck (17%), and T.Y. Hilton (17%). …  I’m calling small sample B.S. here for a couple reasons. The main one if Ebron’s unsustainable touchdown rate that’s lifted his WR by at least one dozen points. The second would be Andrew Luck’s decreased WP. There are too many mouths to feed, so there will be more than 17% of games where production is too evenly split among receivers and running backs for them to beat Luck in points. LasT.Y. Hilton has too much weekly upside (see in the graph below) not to be at least in the 25-35% range. 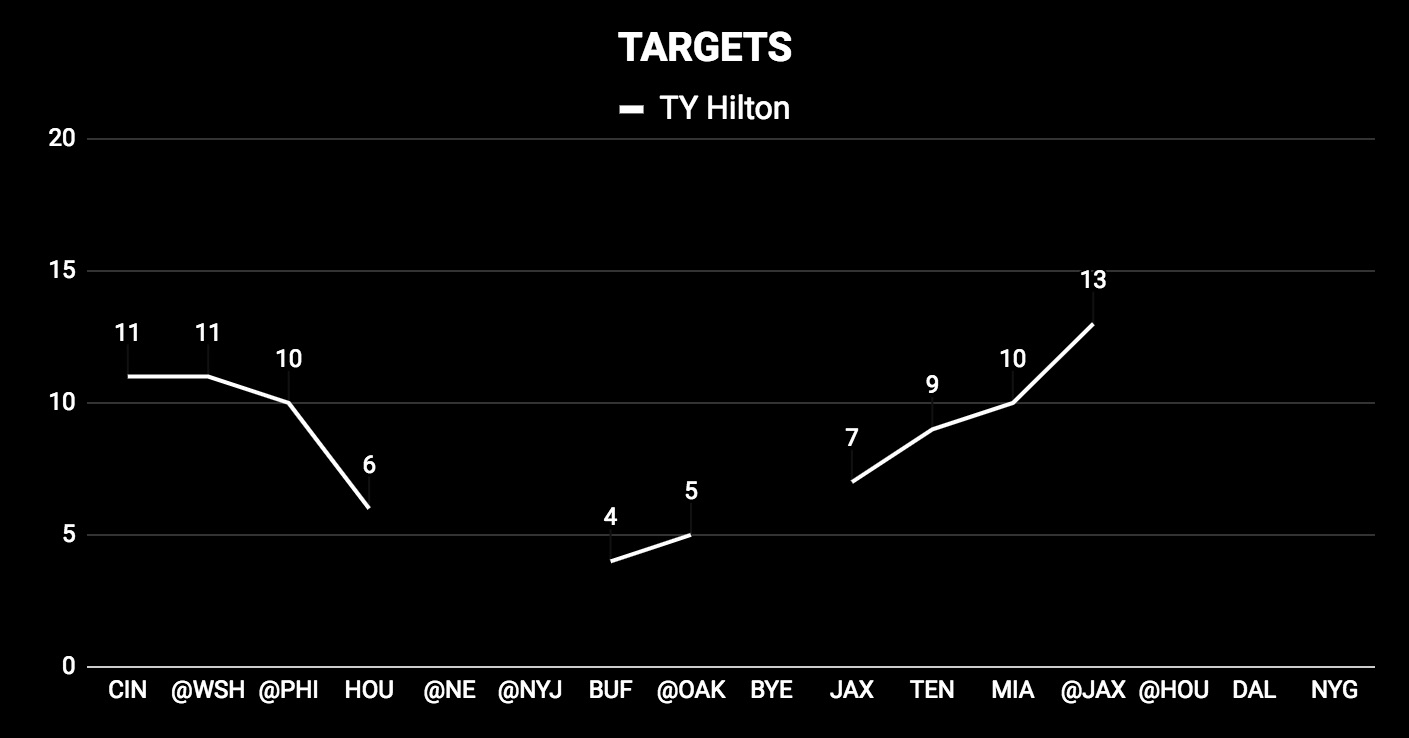 The Tiers Winning Percentage for the New Orleans Saints in the eight games with Mark Ingram: Drew Brees (50%), Alvin Kamara (25%), Michael Thomas (25%), and Mark Ingram (0%). … Ingram does have some equity here, but it is definitely under 10% when everyone is healthy.

The Tiers Winning Percentage for the Tampa Bay Bucs in the seven games with Jameis Winston: Mike Evans (43%), Jameis Winston (43%), Chris Godwin (17%), and Adam Humphries (0%). … Just like with Mark Ingram,  Humphris has some equity but it’s really low. Winston and Evans are the clear favorites on the Bucs, but Godwin has been really good whenever targeted. 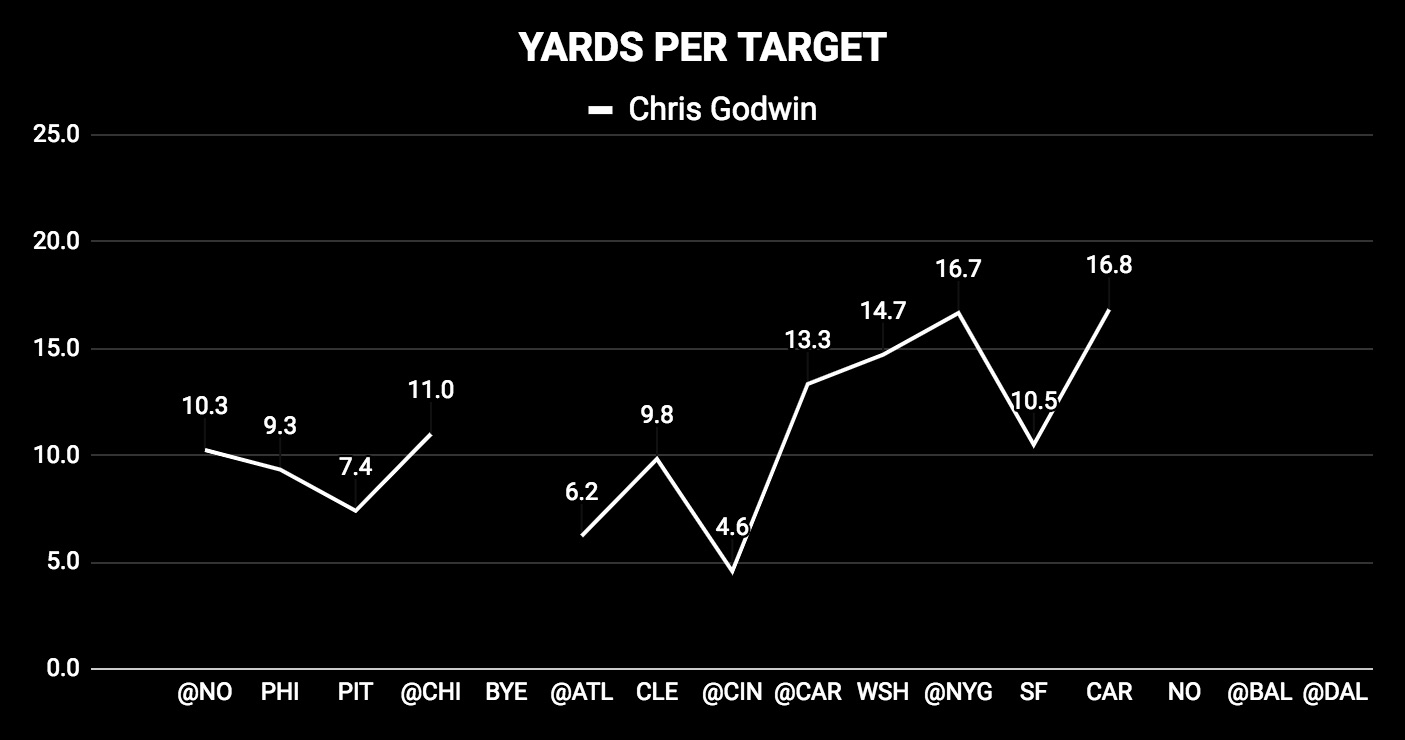 The Tiers Winning Percentage for the  Miami Dolphins in the seven games with Ryan Tannehill: Ryan Tannehill (57%) and Kenyan Drake (43%). … If there was a larger sample, I think Tannehill’s WP would be higher, but neither are good bets against the Patriots Offense.

The Tiers Winning Percentage for the New England Patriots in the eight games with Julian Edelman: Tom Brady (38%), James White (38%), Sony Michel (*25%), Julian Edelman (13%), Josh Gordon (0%), Rob Gronkowski (0%). … When there are a lot of mouths to feed, the typical winners are the quarterback or the goal line running back. That seems to be the case with the Patriots, especially when adjusting White’s WP downwards with Sony Michel healthy and Rex Burkhead active. Josh Gordon and Rob Gronkowski have some equity as well, but it’s difficult for non-target monsters to beat the quarterback in this format. 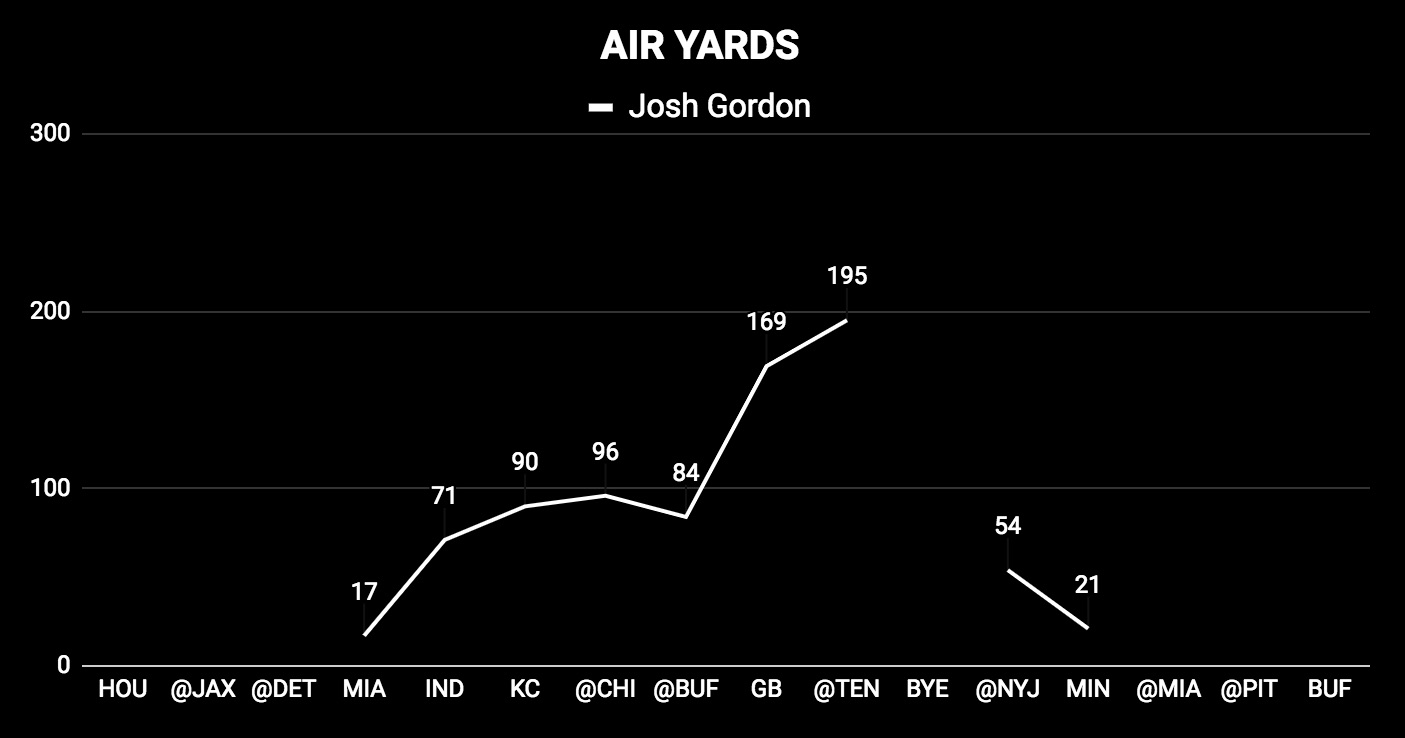 The Tiers Winning Percentage for the Philadelphia Eagles in the ten games with Carson Wentz: Zach Ertz (40%), Carson Wentz (40%), Alshon Jeffery (10%), Josh Adams (10%), Golden Tate (0%). …  Now that Golden Tate has been with the team for one month, his equity is in the 10% range. Zach Ertz is the player whose WP equity will drop the most with Tate in, but Alshon Jeffery has been hit hard too.

The Tiers Winning Percentage for the Dallas Cowboys in the five games with Amari Cooper: Dak Prescott (80%) and Amari Cooper (20%). … Dak has narrowly edged out Cooper in all of non-Thanksgiving games. Both should take advantage of the weak Eagles secondary this week. 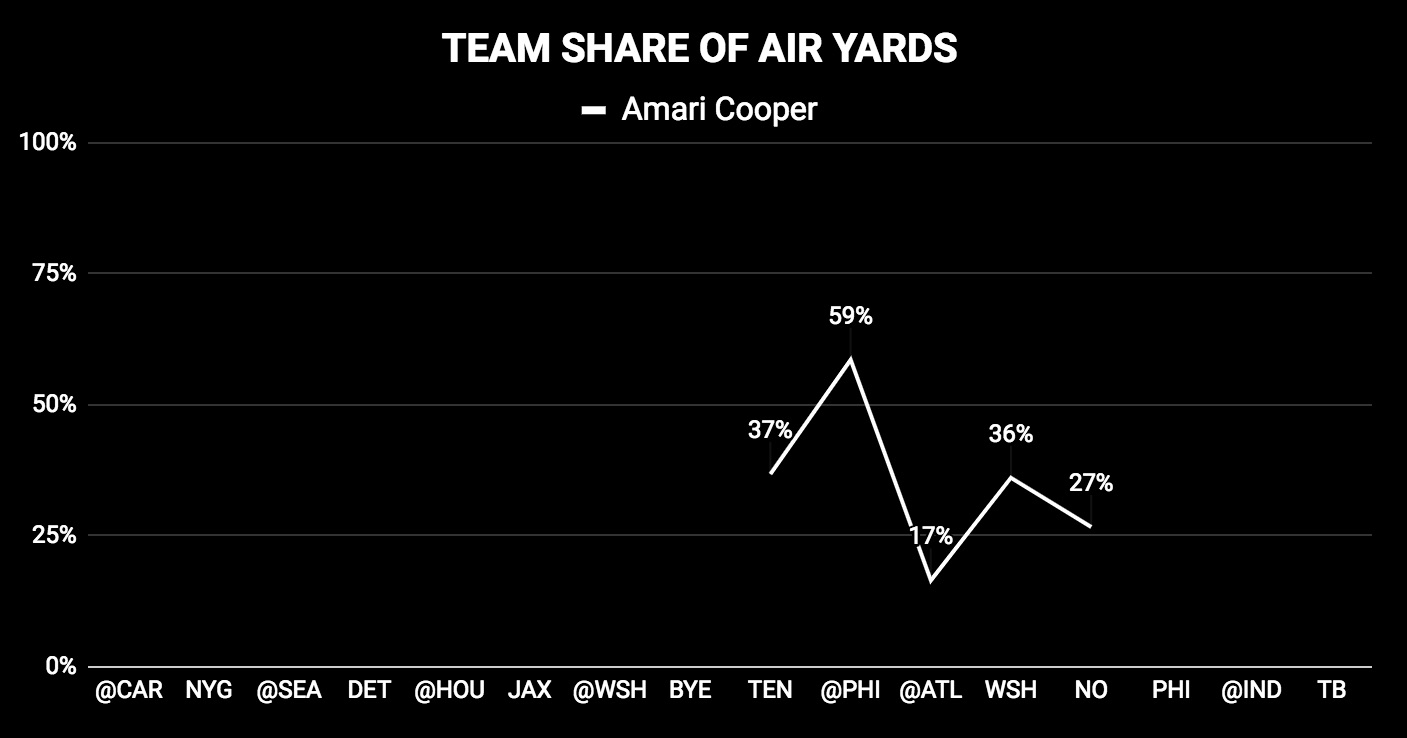 The Tiers Winning Percentage for the Chicago Bears in the  ten games with Mitchell Trubisky: Mitchell Trubisky (70%), Tarik Cohen (10%), Allen Robinson (10%), and Anthony Miller (10%). … This is all Trubisky and his legs, but we need more clarity on his status before diving in.

The Tiers Winning Percentage for the Los Angeles Rams: Jared Goff (42%), Robert Woods (33%), Brandin Cooks (25%), and Josh Reynolds (0%). … It’s close to impossible for Reynolds to win over Goff because Goff will pick up lots of production targeting Woods, Cooks, Todd Gurley, the running backs, and the tight ends. Picking between Goff, Woods, and Cooks (and possibly Trubisky) is one of the toughest decisions on the slate, but I give the slight edge to Goff and Cooks. 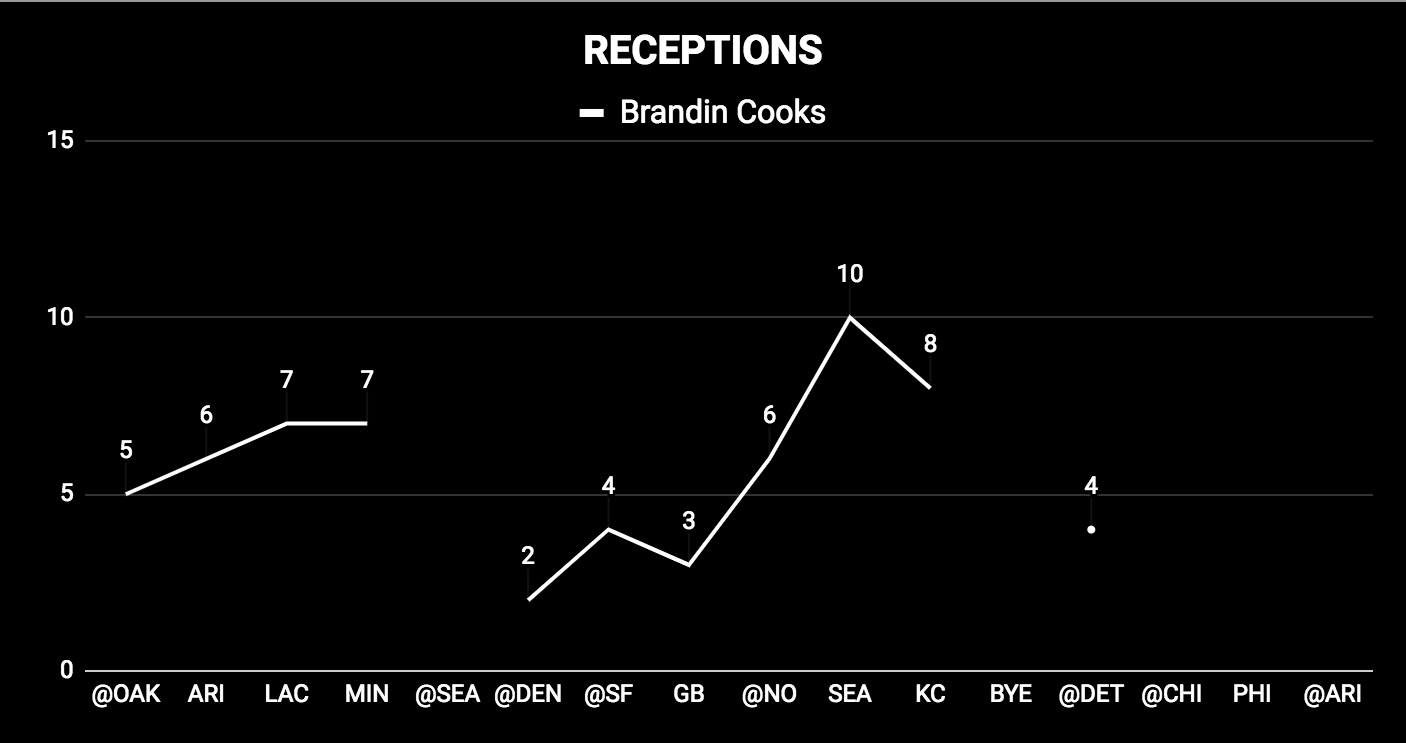 There are 7,225,344 different ways to build a Tiers roster this week, but this new wrinkle really narrows the cash options since quarterbacks score more fantasy points -- except for the very elite running backs -- and have more stable fantasy lines from week to week. It honestly makes playing cash really boring because all of the lineups will be nearly identical, but if people want to get overly aggressive to differentiate, then there is still an edge, even if it comes down to 1v1, 2v2, and 3v3 differences.