If you aren't familiar with this new game mode on DraftKings called ‘Tiers’, all you have to do is select one player from each basket of players. Typically, they are the highest scoring players, so it's not necessary to know the difference between a low-end TE2 and the Jets' WR3 for example. Instead, the key is to make close decisions on the studs, like choosing between Michael Thomas and DeAndre Hopkins. Just like in the other DraftKings' game modes, you can enter 'Tiers' tournaments, 50/50s, Head-to-Heads, and more. This column will help you build your own lineups for each type of contest. Expect updates to the rankings until lock, but feel free to reach out to me on Twitter (@HaydenWinks) if you have questions about the game mode or about this slate. 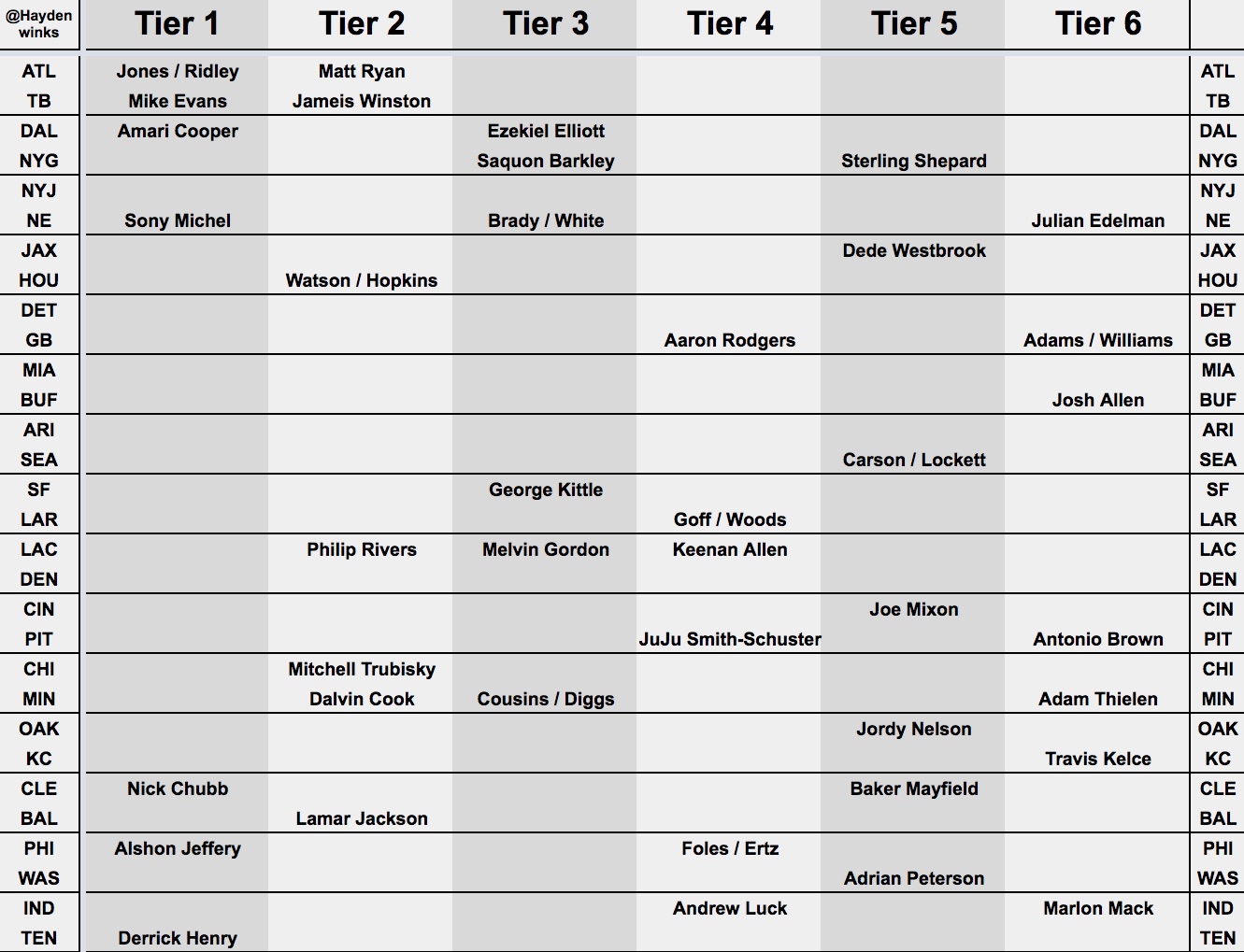 The ‘Salary’ is pulled from the DraftKings’ Classic player salaries. The ‘Winks’ rankings come from myself (@HaydenWinks), while the ‘Daugherty’ rankings come from Patrick Daugherty’s (@RotoPat) weekly Rankings column. His rankings aren’t directly built with DraftKings Tiers in mind, but they are a great tool in finding value and eliminating some players from consideration. Lastly, the 'Hribar' comes directly from Rich Hribar's (@LordReebs) weekly Worksheet column.

Tier 1 is filled with players from the SEC, but it’s not the best tier on the slate. ... Mike Evans gets a plus matchup against the Falcons, and Evans should play a full complement of snaps. … Derrick Henry will get close to 20 carries in what is essentially a playoff game, but there is bust potential if Marcus Mariota is out. Henry has two-touchdown upside regardless. … The Browns are treating this weekend as a playoff game -- they are trying to play spoiler on the Ravens season -- so Nick Chubb’s role should be in tact. Chubb, of course, has an uphill battle against Baltimore’s defense on the road. … The Eagles need to win to have a chance, so Alshon Jeffery will be used as normal. … Sony Michel gets a plus matchup at home against the Jets, and the Patriots are incentivized to win. … Julio Jones would be much higher on the list, but the Falcons might scale him back or rest him entirely as he’s battling injuries and the Falcons are eliminated. … Calvin Ridley should play the full game since he is healthier than Julio, and Ridley will be more attractive if Jones is ruled out. He’s a tournament option either way if making more than 10 lineups. … The Cowboys are incentivized to rest their studs, so I’m fading Amari Cooper.

Tier 2 is filled with more quarterbacks, and there’s a lot of questionable incentives here. … Deshaun Watson and DeAndre Hopkins need to win to clinch a home game, but they are playing the Jaguars. The Jacksonville defense has been super hit and miss this season, and the Texans are playing at home. I’d rather bet on the Texans than bet against them. … Lamar Jackson will be trying to lead the Ravens to the playoffs, so expect a typical game from him. There’s 100-yard rushing upside with LJ. … Matt Ryan is in a good spot against the Bucs, but Ryan will be downgraded if Julio is limited or out as I expect he will be. … Jameis Winston has a great matchup at home against the Falcons, but there was a report that he might not play the full game. Use Winston at your own risk, but the upside is there for tournaments. … Mitchell Trubisky should play the full game, but the Bears could rest players if they see the Rams are winning early. … Philip Rivers will head into Denver with some incentive to play and some incentive to rest. The Chargers could scale Rivers and the starters if they see the Chiefs are winning early. Rivers still has upside, but there is bust potential here. … Dalvin Cook and the Vikings need to win, so Cook should see his typical usage.

Tier 3 is more straightforward. … Saquon Barkley will be featured as usual, but the Giants could also send him off with a big game so Barkley could win Rookie of the Year (and mask the fact that they choose a running back -- see the 15 examples of backup RBs producing with the starter out -- over potential long-term starting quarterback Sam Darnold). Only Melvin Gordon can compare to Barkley this year in terms of DK points. … George Kittle has a chance to break all-time tight end records this week, but he’s going to need a huge game to get there. The 49ers will be without other starters, so Kittle’s target share should be elevated in the finale. … Tom Brady has struggled and his upside is lower with Josh Gordon out and Rob Gronkowski playing injured, but there is the incentive to win. Brady also gets an easy home matchup a poor Jets Defense. … Stefon Diggs and Kirk Cousins need to win to clinch playoffs, so expect a typical game from them. The only issue is the strong Bears Defense, but there is a chance that some players are rested in the second half if the Rams are winning early. … Melvin Gordon would be a lot higher if I knew he was playing the full game, but Gordon would be the first player to get off the field if the Chargers begin to rest halfway through the game since he’s coming off an injury. Gordon has big upside however. … James White gets the matchup and the incentive to win, but White hasn’t been used enough in recent weeks to compare to Barkley and others. … Ezekiel Elliott is a fade because the Cowboys are locked into the No. 4 seed. The Cowboys choose not to play their starters the last time they were in this situation.

Tier 4 rivals Tiers 3 and 6 for the most stacked. … I will be betting on Andrew Luck in a must-win game. We have seen Luck’s weekly ceiling this year. … JuJu Smith-Schuster arguably has the most incentive for a big game. The Steelers are in a must-win game, and Smith-Schuster will be trying to make up for his costly fumble last week. Smith-Schuster is also in striking distance to lead the NFL in receiving yards if Julio Jones sits. … Aaron Rodgers doesn’t care that the Packers have been eliminated from the playoffs, so expect a typical game from him. The Lions are not a matchup to be scared of. … Robert Woods has at least 12 DK points in every week, and he went off with Todd Gurley (questionable) sitting last week. The Rams still need to win to clinch home-field advantage as well, so Jared Goff is clearly a tournament option. … Zach Ertz and Nick Foles have all the incentive in the world for a big game. They both had huge fantasy games last week, and the Redskins aren’t playing for anything this week. … Keenan Allen needs a ton of targets to reach a ceiling, and I’m not betting on that in a game where the Chargers could end up resting players.

Tier 5 is a disaster. … Joe Mixon has the volume we covet, but this Bengals Offense is a straight dumpster fire due to injuries. The Bengals are also facing the Steelers, who have to win to have a shot at sneaking into the playoffs. Mixon has a low floor. … Baker Mayfield and the Browns want to spoil the Ravens playoff hopes, but Mayfield will be going on the road to play one of the league’s truly good defenses. The clock will also be an issue with the Ravens run-first attack. … Chris Carson and Tyler Lockett might not play the entire game since the Seahawks are locked into a road playoff game. Carson has the better matchup of the two (Lockett may end up battling Patrick Peterson). … Sterling Shepard will be in his usual OBJ-less role, and the Cowboys secondary could be weaker if Dallas rests their starters as expected. … Dede Westbrook hasn’t shown a ceiling all season long, and the Texans have an incentive to win. … Adrian Peterson needs positive game script to have any chance at a ceiling game. That won’t be the case with the Eagles needing a win.

Tier 6 is arguably the best tier, which is hilarious because it’s filled with non-Power 5 players. … Antonio Brown has a huge ceiling in a must-win game for the Steelers. … Davante Adams is in striking distance for the Packers’ all-time record for receiving yards. Aaron Rodgers doesn’t care that the Packers have been eliminated from the playoffs. … Travis Kelce is in a blowup spot with the Chiefs needing a win to clinch home-field. The Raiders are also a joke of a team, so Kelce should feast. … Julian Edelman has a big target expectation with Josh Gordon out and with the Patriots trying to lock in a first round bye. The only issue is getting to a ceiling. … Adam Thielen and the Vikings need to win to make the playoffs, so he’s an obvious tournament option. The Bears matchup isn’t ideal however. …  Josh Allen has gone full yolo, and it’s helped Allen create a ceiling. A home game against the Dolphins is also a plus. … Jamaal Williams is expected to play 100% of the snaps once again, so he’s a high-floor, high-ceiling option. I’m just not sure it’s a ceiling that can compete with AB, Adam, or Kelce. … Marlon Mack and the Colts need to win to make playoffs, but Mack needs positive game script to get a ceiling. I’m not sure a road matchup against another team fighting for the playoffs is setting up for positive game script. The Titans are potentially without Marcus Mariota.

There are 262,144 different ways to build a Tiers roster this week. These cash game considerations will help you narrow down your options for H2Hs, 50/50s, and Double Ups.