This is my first in-depth look at Sunday’s slate. Expect updates to the rankings until lock when news starts flowing in. Please reach out to me on Twitter (@HaydenWinks) if you have questions about the game mode or about this slate. 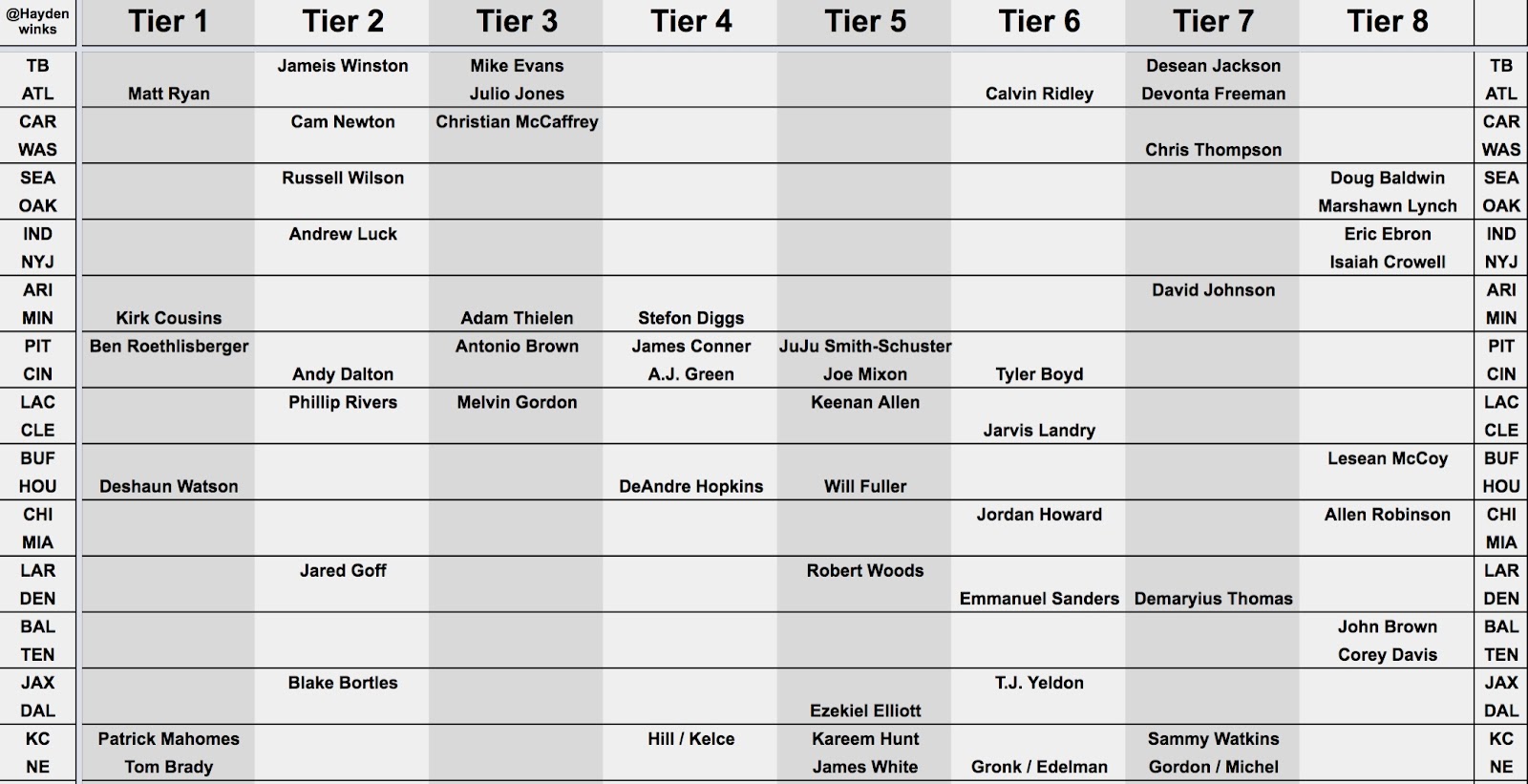 KC (28.25) vs NE (31.75) - There are 11 players spanning across five tiers from this game… Let me repeat that… There are 11 players from this game!!! Oh boy. Let’s break this down starting with Tier 1… Unfortunately DraftKings put Patrick Mahomes (29 FPPG) and Tom Brady (20.3) in Tier 1 together, but they had no choice. Mahomes has the most fantasy points among QBs despite playing @LAC, @PIT, @DEN, and the Jaguars. Mahomes is projected to score the most points in the Tier once again, but Tom Brady should have no trouble slicing up the Chiefs burnable secondary as well. I want to be overweight compared to the field on Tom Brady this week in tournaments… Travis Kelce and Tyreek Hill are in Tier 4 together since they have produced very similar numbers this season. This is a tough call because projecting ownership between the two is difficult. I want to have more exposure to the lesser owned player, and I think Kelce will be slightly less owned, but both are great tournament options… Kareem Hunt (16.4) and James White (20.0) are matched up together in Tier 5. In lineups that feature Brady, I will have Kareem Hunt in hopes that he will steal touchdowns from Mahomes since I will need Brady to outscore Mahomes to take down a tournament… Tier 6 includes Rob Gronkowski (12.4) and Julian Edelman (12.7). The Chiefs are very banged up at linebacker and stud safety Eric Berry is likely out as well. This is a Gronk eruption spot, and I certainly want to have more Gronk exposure than the field. I’m hoping people get scared off of Gronk with the red questionable tag next to his name… Sammy Watkins (11.9), Sony Michel (12.3), and Josh Gordon (9.0) are all in Tier 7. Gordon has two receptions in back-to-back games, but there isn’t anyone in the Chiefs secondary that is capable of stopping Gordon when he’s right. I’ll take the gamble that Gordon gets more playing time and targets in his first game on the Pats that is expected to be close. I will be rostering Sony Michel -- given his knee is cleared -- when I make lineups with Patrick Mahomes for the same reasons as I mentioned previously with Kareem Hunt. Sammy Watkins is worth inserting into a Mahomes lineup or two as well…

TB (27.25) vs ATL (30.25) - There are seven players spanning across five tiers from this game… DraftKings did us a solid by separating Matt Ryan (26.5) and Jameis Winston (8.5) in Tier 1 and Tier 2. Ryan’s ownership could be lower than expected with Patrick Mahomes and Tom Brady stealing looks away from him, which gets me excited. With Devonta Freeman doubtful, this should be a very aerial attack against a Bucs secondary that’s giving up the 28th most fantasy points to opposing QBs. I’ll have 25% Matt Ryan ownership in hopes that it’s more than the field… Jameis Winston is an awesome “exploit recency bias” play to stack with Matt Ryan. Winston went over 280 passing yards in 8-of-13 games last year, and the Falcons are without multiple defensive starters. Winston and Andy Dalton will be my most owned Tier 2 quarterbacks… Julio Jones (19.5) is in an eruption spot for the same reasons as Matt Ryan. I’ll even be super bold and predict that Jones scores a touchdown this week! Since Todd Gurley and Alvin Kamara aren’t in Tier 3 this week, Julio is in consideration in both cash and tournaments, especially in those Matt Ryan lineups… Mike Evans (23.7) is the obvious pairing for Jameis Winston lineups and is an option even in Mahomes or Brady lineups since that game doesn’t have Tier 3 players. Evans could finish as the highest scoring player in Week 6… Calvin Ridley (17.9) is not a player I will be rostering unless it’s in lineups with Matt Ryan or Jameis Winston. He’s an obvious correlation play with Ryan, but he’s also the only “run it back” option for Winston lineups… DeSean Jackson (21.6) is the only real option in Tier 7 with Devonta Freeman doubtful to play. Unlike Ridley, I am open to rostering Jackson in non TB vs. ATL stacks because he’s in a much weaker Tier 7. In both Winston and Ryan lineups, Jackson is a virtual lock.

PIT (25) vs CIN (27.5) - There are eight players spanning across six tiers from this game… Ben Roethlisberger (Tier 1, 25.1 FPPG) is an easy fade for me with Mahomes, Brady, Ryan, Watson, Cousins all in better spots… Andy Dalton (2, 21.6) is a great play in tournaments on the other hand. Dalton is the only quarterback in Tier 2 playing at home, and his 27.5 implied total is top-five in the NFL this week… I will also fade Antonio Brown (3, 21.1) this week since I am more comfortable with Adam Thielen, Melvin Gordon, Mike Evans, and Julio Jones in easier matchups. Wish me luck… A.J. Green (19.8) and James Conner (23.8) are in Tier 4. Both Conner and Green are pivots away from Travis Kelce and Tyreek Hill in tournaments, but Green gets a tough matchup against Joe Haden… JuJu Smith-Schuster (20.2) and Joe Mixon (18.7) are in Tier 5 together, but I prefer Mixon over my fellow 2016 USC classmate JuJu. Mixon’s workload and matchup are mouthwatering… Tyler Boyd (6, 17.6) is a tournament option as well with Green being shadowed by Haden, but Tier 6 is more loaded than usual this week, so exposure needs to be limited.

ARI (16.25) vs MIN (26.75) - There are four players spanning across four tiers from this game… Kirk Cousins (24.9) will be my fourth most owned quarterback in Tier 1 behind Mahomes, Brady, and Matt Ryan. The Vikings are projected to score just 1.5 points less than the Chiefs and I don’t think ownership will reflect that between Mahomes and Cousins… Adam Thielen (27.8) is averaging the most points in Tier 3 and he should escape Patrick Peterson’s coverage since he plays inside. Thielen is not only a tournament option, but he deserves cash-game consideration as well… Stefon Diggs (21.3) gets the tougher matchup and Tier 4 is loaded with other options. Diggs is most likely a fade… David Johnson (16.0) was a great pick last week, but DraftKings dropped him another tier into Tier 7. Johnson is my second favorite tournament play behind Jackson in the second worst tier.

BUF (15.5) vs HOU (25.5) - There are four players spanning across four tiers from this game… Deshaun Watson (Tier 1, 25.8 FPPG) stacks with DeAndre Hopkins (4, 23.5) will be low-owned since that’s the same tier grouping as Mahomes + Kelce/Hill. Will Fuller is a bounceback option as well in Tier 5… The Bills may feature Lesean McCoy (8, 8.4) this week in an attempt to increase his trade value but that 15.5 implied total is hard to swallow.

The different colors represent different games. For example, the light yellow are players from the NO vs NYG game. The idea here is for you to see which games go well together and the colors should help. These aren’t full lineup recommendations because I don’t think it’s optimal to only use players from two or three games to fill all eight spots. With that being said, we definitely need to be pairing some players together for GPPs. As Sam Hinkie says, “I can imagine that some of these sound contradictory… That yin and yang is part of it.”

There are 5,308,416 different ways to build a Tiers roster this week. My cash game considerations will help you narrow down your options for H2Hs, 50/50s, and Double Ups. The players listed below are in the order of my rankings, meaning the top option in each tier is included in my most used cash game lineup.

1. Sony Michel (vs. KC) but make sure he’s playing on Sunday