This is my first in-depth look at Sunday’s slate. Expect updates to the rankings until lock when news starts flowing in. Please reach out to me on Twitter (@HaydenWinks) if you have questions about the game mode or about this slate.

I have also created a survey for everyone to take on which players they plan on playing this week. The responses are open only to the people who complete the survey, and it will be a good guide to seeing what ownership will look like within each tier this week. The people who take the survey will have an edge over those who don’t. 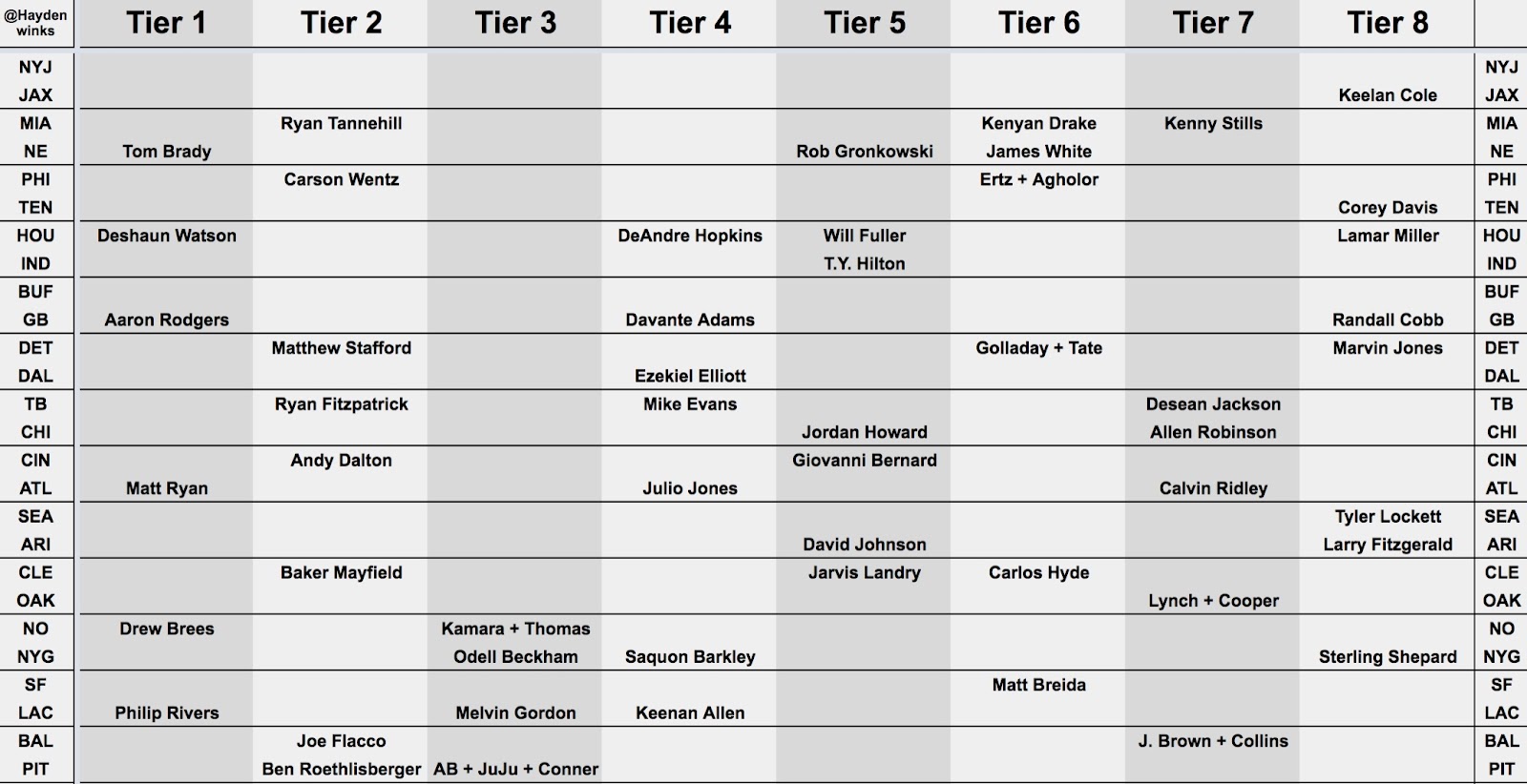 NO vs NYG - There are six players spanning across four tiers from this game… Michael Thomas (3) and Alvin Kamara (3) are on record pace for receptions in their positions, but we will have to choose which one to roster as they are in the same tier. Drew Brees (1) with Thomas or Kamara is once again a great combo… To run it back, I love Saquon Barkley (4) and Sterling Shepard (8). Without Evan Engram, I anticipate a couple more targets to go Shepard’s way. The Saints are also without their highest graded corner Patrick Robinson… This game could take down some tournaments.

NE vs MIA - There are six players spanning across five tiers from this game… The Patriots have averaged 34.2 points in games following a two-game losing streak. I’m expecting Tom Brady (1) and the Patriots to get back on track this weekend… Rob Gronkowski (5) is always a threat for a multi-touchdown game, especially with the Dolphins’ linebackers and safeties given poor coverage grades by PFF. Gronk could be my most owned Tier 5 player for tournaments… James White (6) gets a bump with Rex Burkhead placed on injured reserve. White’s a fine stack with Brady because most of his production is through the air… Ryan Tannehill (2) won’t be in any of my lineups with much better quarterbacks in the same tier. The same thing can be said about Kenyan Drake in Tier 6… Kenny Stills (7) is the player I’m to running it back with, but I don’t think it’s necessary to do so. The Patriots aren’t afraid to lay on points through the air even with a big lead.

DET vs DAL - There are five players spanning across four tiers from this game… I’m a little concerned about the pace of this game with the Cowboys at home, but the players are quite cheap… I predicted Ezekiel Elliott (4) to be in Tier 3, so I will have some Zeke exposure in tournaments. The Lions have given up the most rushing yards in the NFL (149.3 per game)... Matthew Stafford (2) is an option, but he’s certainly not my favorite Tier 2 quarterback with Ben Roethlisberger at home. That won’t stop me from playing Kenny Golladay or Golden Tate in Tier 6. The two receivers have averaged the most points within the tier. Marvin Jones has fallen into Tier 8, and I will be a buyer at that price.

BUF vs GB - There are three players spanning across three tiers from this game… I don’t want to overthink this game too much, even with Aaron Rodgers playing with an injured knee. Rodgers (1) and Davante Adams (4) all have tons of upside at home against one of the worst teams in the NFL… With that being said, I won’t be playing them in cash. UPDATE: Randall Cobb is out.

CIN vs ATL - There are five players spanning across five tiers from this game… Both of these defenses are in the top-seven in yards allowed. Matt Ryan (1) has 43.1 and 31.7 fantasy points per game in the last two weeks, and I’m willing to ride the hot hand here in tournaments. Stacking Ryan with Julio Jones (4) and Calvin Ridley (7) is a winning formula… The Falcons are down multiple starting defenders, which gives Giovani Bernard (5) a mouthwatering matchup. Falcons opponents have targeted their running backs a ton -- RB targets: Sproles 7, McCaffrey 15, and Kamara 20 -- with great success this season. The pass catching potential for Bernard makes him a viable stack with Andy Dalton (2).

BAL vs PIT - There are seven players spanning across three tiers from this game… DraftKings really limited our ability to stack this game by putting the two quarterbacks together in Tier 2 and by putting Antonio Brown with James Conner and JuJu Smith-Schuster in Tier 3… The best part of this is Ben Roethlisberger (2) avoiding Tier 1. Big Ben and Antonio Brown (3) will be my most used non-Tier 1 quarterback stack. I don’t think James Conner or JuJu Smith-Schuster are expected to outscore Brown, so I’ll probably fade both… Joe Flacco (2) isn’t rosterable and I don’t love John Brown (7) or Alex Collins (7). If I decide to run it back on a Steelers stack, it will be with John Brown.

SF vs LAC - There are four players spanning across four tiers from this game… Philip Rivers (1) is quietly averaging 24.2 DK points per game and gets a great matchup at home against the 49ers, who have given up the third most passing touchdowns. His production has increased with Melvin Gordon (3) getting more looks as a receiver and with Mike Williams looking healthy again after a lost rookie campaign. I’m anticipating Rivers to be relatively low-owned and I want to be overweight on the field… Melvin Gordon is the third best fantasy running back only trailing Gurley and Kamara but being in Tier 3 makes it tough to roster Gordon. Is he projected to outscore Kamara, Thomas, and Brown? Probably not… Keenan Allen is a bounceback candidate against a weaker secondary, but, like Gordon, Allen is tough to squeeze in with the others in his tier… Matt Breida (6) is interesting here if he gets in full practices later this week coming off his hyperextended knee. The injury risk eliminates him from cash game consideration, but C.J. Beathard funnels targets to running backs.

I got a couple questions about this part, so let me explain. The different colors represent different games. For example, the light yellow are players from the NO vs NYG game. The idea here is for you to see which games go well together and the colors should help. These aren’t full lineup recommendations because I don’t think it’s optimal to only use players from two or three games to fill all eight spots. With that being said, we definitely need to be pairing some players together for GPPs. As Sam Hinkie says, “I can imagine that some of these sound contradictory… That yin and yang is part of it.”

There are 8,429,568 different ways to build a Tiers roster this week. My cash game considerations will help you narrow down your options for H2Hs, 50/50s, and Double Ups. The players listed below are in the order of my rankings, meaning the top option in each tier is included in my most used cash game lineup.