Volume is king in fantasy football, but I think some analysts have gone a little too far prioritizing volume as if it’s the only variable that matters. Talent matters a little bit, so does offensive scheme. You can’t tell me that Jason Garrett’s rushing scheme is as good as Greg Roman’s, but when we only focus on touch totals or projected touch totals, then we are throwing out too many other things that matter.

Yards To The Goal Line Because touchdowns are so valuable for fantasy football, the biggest variable that makes one carry unlike the other is yards to the goal line. A carry at the one-yard line has been worth 3.36 PPR points on average since 2015. A carry outside of the red zone is worth approximately 0.5 PPR points. Everyone knew this was a big deal already, but I think some still cite “red zone carries” as being important when “inside the five carries” or maybe “inside the 10 carries” are what we are truly looking for.

Yards To Go For A 1st Down This is less of a big deal, but yards to go for a first down makes a slight impact on fantasy points. The biggest thing to note with this chart is the fact that “give up carries” (ones on let’s say 3rd and 18) are the highest earners when looking at yards to go. This is partially why someone like Duke Johnson averages a higher yards per carry average compared to a goal-line specialist.

Shotgun vs. Under Center Carries in shotgun (0.63 PPR points on average) outperform carries from under center (0.58). I wrote an entire column on the reasons for this here, but in one short paragraph, it’s simply because defenses put fewer defenders in the box when the opposing offense is in shotgun because offenses are more likely to pass when they’re in shotgun and defenses know that. With fewer defenders in the box, running backs have more room to run, thus scoring more fantasy points.

Outside vs. Up The Middle Carries Another small thing to account for is whether a team runs up the middle (ew) or if they prefer to attack off tackle (fun!). Since 2015, runs up the middle have averaged 0.48 PPR points per carry and runs outside have averaged 0.56. Seems like it’s not a big deal, but the true difference here is the upside of each type of carry. Outside carries are nearly twice as likely to go for a big play, whether or not you define that as a gain of 10 or 20 yards. For more on this, read Stop Running It Up The Middle.

So which offenses have the best rushing schemes according to these variables? I thought the best way to look at it was to see how often teams called an optimal run play (outside run from shotgun) versus how often teams called the stone-cold worst run play (run up the middle from under center). It’s no surprise to see the Ravens lapping the rest of the league in these metrics:

The last thing you’ll see me doing is trash coach Kyle Shanahan or coach Sean McVay about their running schemes, even though their offenses ranked poorly in these two metrics. One distinct difference between their offenses and others that ranked low is the use of pre-snap motion. By using pre-snap motion, linebackers and defensive backs are a step slower at reading the run play as they are being pulled in two directions at the same time (with the RB or with the motion man). This pause allows the running back to gain more yards than he otherwise would without the pre-snap motion. I wish I had the play-by-play data to support this with stats, but I’m comfortable with this theory just because I have eyeballs. 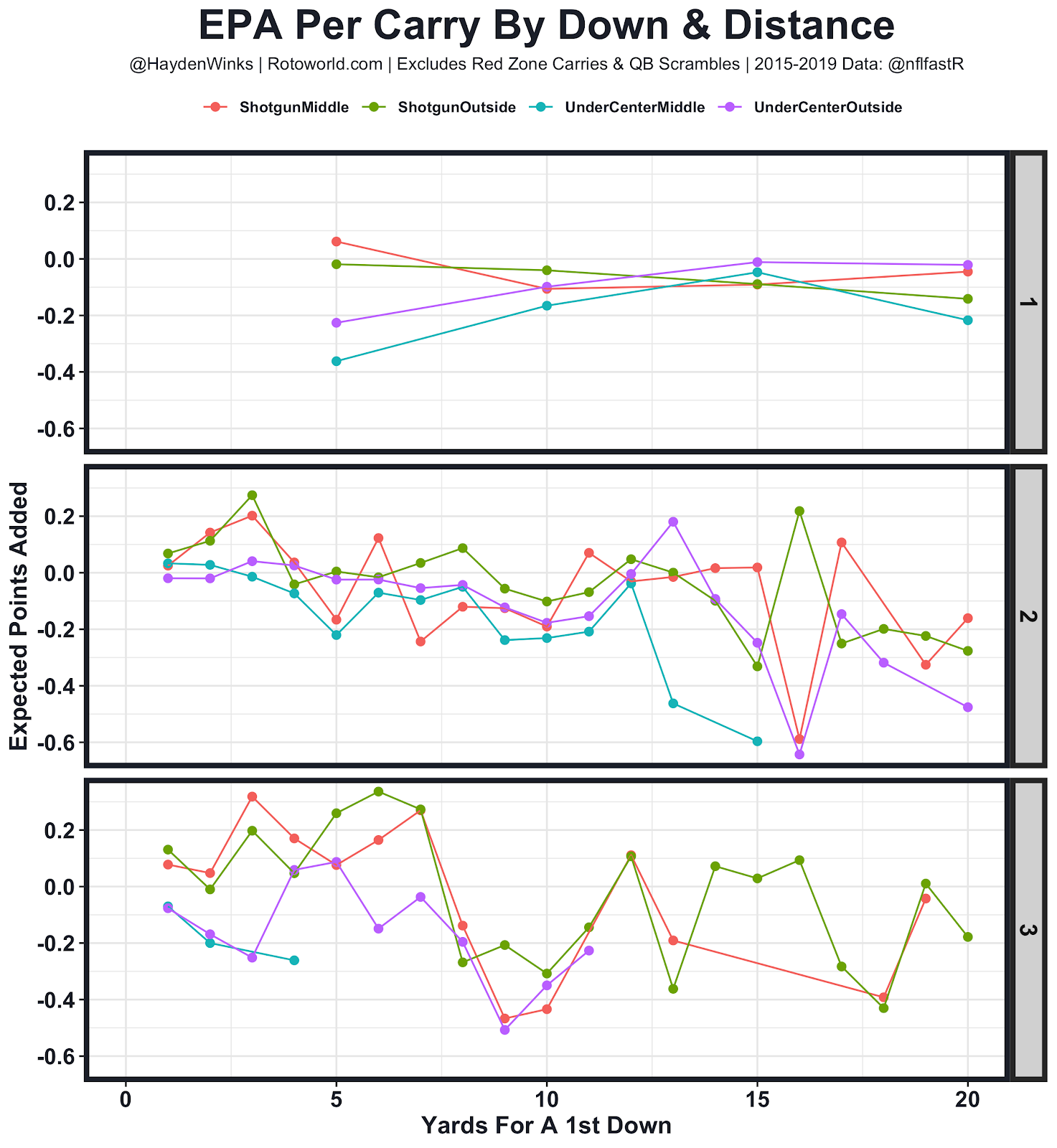 The point I was making about outside vs. middle and shotgun vs. under center isn't just cherry picked either. On 1st and 10, shotgun/outside carries have the best expected points added (EPA) of the four types of runs and under center/middle carries had the lowest. The same ranking holds on 3rd and short, meaning it's generally better to spread defenses out by going into shotgun and running outside regardless of the down and distance. Of course, offenses should NOT be running in a lot of these scenarios. I wrote about when it's better to pass or run by down and distance here, and then did a follow up study on how offenses should change their offenses in the red zone here.

The variables I went through in this column are the same ones that I use to build my Expected Fantasy Points (xFP) metric, plus more. It converts all of this information into one easy to read stat that will help with us on a week-to-week basis with fantasy lineup decisions. I’ll release the weekly xFP totals on Tuesday at Rotoworld this upcoming season. Here’s an example of what it will look like:

1. Stop Running It Up The Middle
2. Run From Shotgun, Not Under Center
3. Throw Beyond The First Down Marker
4. How Often Do Running Backs Block?
5. Should the NFL Run More in the End Zone?
6. Carries Aren't Created Equal