New season, fresh outlooks and replenished expectations. We’ll get more into details about expectations shortly, but with the season beginning anew, some housekeeping items.

This will mark the third season of the Hockey Analytics space here on Rotoworld. An archive here provides some historical context to which I may refer to on occasion.

There are many ideas and concepts that I’d like to explore this season, from new material regarding WAR and GAR (wins/goals above replacement), and delving much further into microstats amassed by wonder tracker Corey Sznajder. If you have the ability to support Corey with some pocket change, this is a link to his Patreon page.

Christopher Turturo has taken these stats and put together into a wonderful visual.

This is an example: 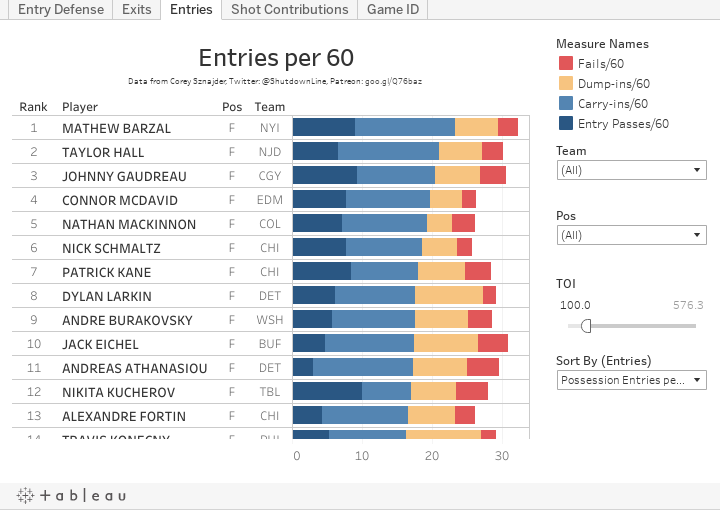 Christopher has created more visuals available through his author page on Tableau that are worth exploring and we will do that and much more as the season moves forward.

We tweaked some of the components to display in the 2018-19 McKeen’s Yearbook for each player base on newest implementations and newest research. We moved away from an entirely shot-based display of stats to something more intricate, providing context and more robust analysis on each player.

Readers of this space are likely familiar already with the concept of expected goals – which is explained in greater detail here.

A side note on point shots – expect less slap shots from point men, favoring accuracy and potential rebounds, opting instead to get shots through on goal rather than winding up and wasting time – allowing for engagement from checkers.  Moving on.

Using the numerical value, now we can generate expected goals (denoted as xG), the culmination of the amount of individual goals should have been scored from the expectations based on shot location and this can be expanded to include on-ice component as well.

Subtracting goals scored from expected goals provides a differential that measures real results. In the tables below, I’ve outlined some selective names I found interesting in four different categories. Enhance the analysis by adding a component like Individual Point Percentage (IPP – the percentage of goals to which the player contributed a point). Individual percentages can be further cascaded down to goals, assists and primary points in the tables below.

This first table (all data is 5v5), highlights players that had on-ice success, but underperformed according to individual expected goals.

Philadelphia’s Sean Couturier scored 31 goals in 2018-19, and with a -0.39 differential, it’s fairly to say he likely capitalized on the primary scoring chances to closely mirror expected and real results. However, while on the ice, the Flyers scored 21 more goals than expected based on shots and location. He earned a point on 55% of on-ice goals scored – 47% as a primary contributor, goal or first assist.

The conditions for Couturier to top the 30-goal plateau required an excessive amount of even strength scoring and both at the individual level (11.85% shooting percentage) and on-ice at the team level. Are those conditions repeatable? Probably not.

William Nylander, despite hitting the 20-goal plateau experienced some struggles scoring goals – but not producing points. When on the ice, the Leafs scored 17 goals above on ice expected goals, yet he underperformed by 1.73 individually in goals scored. Vladislav Namestnikov may have been one of the best pump and dump examples in recent history – put into prime situations to increase his value and then traded for an important asset en route to a competitive postseason, ousted in the Conference Finals.

Changing the dynamic, players that outperformed their individual xG while on-ice xG lagged. The first thing to notice was the inflated individual shooting percentages – highlighted by Sonny Milano (14 goals in 2018-19) at 22.41%. He earned a point on 80.95% of goals scored while on the ice and scored 61.9% himself. The on ice results don’t show a good deal of team success and with the high xG, shooting percentage and IPP, it tells us that Milano had to do a lot on his own in order to be successful. In 55 games, scoring 14 at even strength made him dangerous. There’s a name to monitor here and perhaps a good value play if the team can prop up any personal regression.

Nazem Kadri has been an incredibly dynamic scorer over the last couple of seasons and even with a change in linemates – likely moved away from Mitch Marner – there’s still lots of potential through special teams and talented firepower up front.

The Leafs pivot earned points on a high percentage of goals scored.

This entire group is full of players that may find a small dip based on individual performance, but a change in on ice conditions can have an effect to prop them up to impressive totals.

As the season progresses, using the combination of xG and IPP can be fruitful for making decisions, be it in fantasy, or in real life as teams find more improved methods of evaluating talent.