Welcome to the inaugural Fantasy Football Forecast! My goal with this weekly column is to get you actionable information as quickly as possible, regardless if you're playing season-long fantasy, DFS, or are grinding player props.

If you're just looking for fantasy football rankings and only have 10 minutes to skim through for your sit/start decisions, then head over to the "Forecast" sections below where I project each player's PPR finish based on a 12-team league. But if you want to get your research on, then I have full player breakdowns. As always, hit me up on Twitter @HaydenWinks if you have questions.

Today, it's the season opener between the Packers and Bears (7:30 pm ET on NBC or the NBC Sports app). 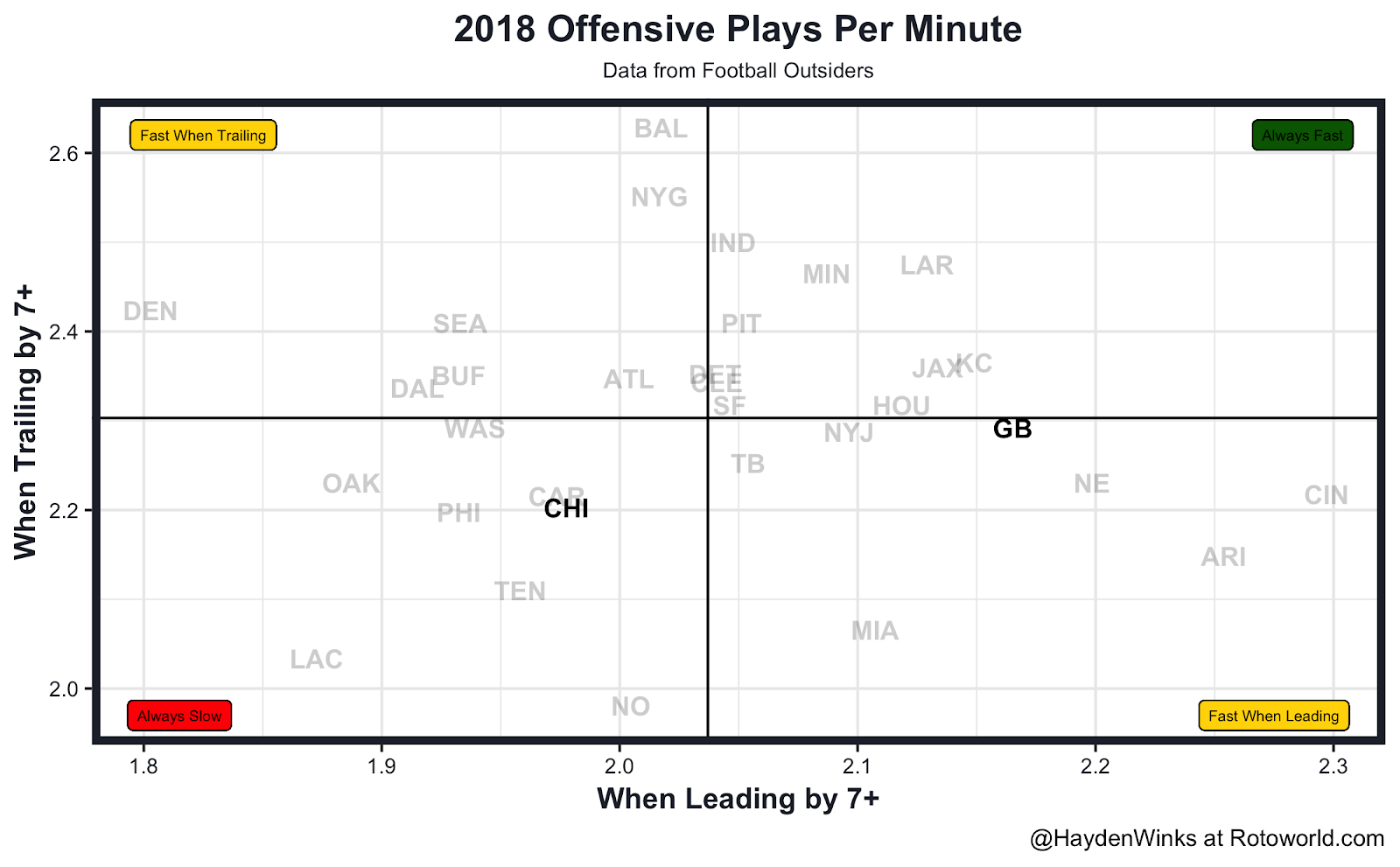 Mitchell Trubisky and the Bears’ offense are projected to score 25 points, the 12th-most of Week 1. I think they’ll have to get there with big plays because Trubisky hasn't shown any level of consistent play thus far. At home last year, Trubisky had three games with less than 15 fantasy points and three games with over 31 fantasy points, leaving him as nothing more than a QB2 and tournament-only play in DFS.

Allen Robinson showed promise down the stretch last season with his 144-target pace across his final five games. And he will be a beneficiary of the Bears’ more-favorable passing game script in 2019 due to the Bears’ projected defensive regression. This week’s 25-point team total will be among the highest the Bears will have this season, giving Robinson a realistic shot at finishing as a WR2 after being drafted as the WR27 in August drafts. … Anthony Miller’s injury history is concerning, but he did score seven touchdowns and did average 7.8 YPT as a rookie while playing through injuries last year. Miller is also a candidate for a target bump in 2019 as he moves above Taylor Gabriel on the depth chart. Miller is a WR4 and “has the best matchup of the group” per Ian Hartitz, while Gabriel falls into the WR5 range with fellow gadget receiver Cordarrelle Patterson, who is a nice punt play in DFS showdown, now in the mix. … Trey Burton (groin) is questionable to play. Even if he suits up, Burton can’t be trusted as a TE2 after missing most of the offseason. Burton’s backup, Adam Shaheen, would be nothing more than a TE3 dart throw if he were to draw the start.

David Montgomery was a 59th-percentile RB prospect in my Analytics Top 300 model (below-average athleticism, low college YPC, etc. kept him from being rated higher), but the Bears are a lot more bullish than my nerdy spreadsheets. Montgomery figures to take on a version of the 2018 Jordan Howard role -- one that was dependent on the Bears playing with a lead (see above chart) -- but he does have better hands than Howard. The question is if Montgomery’s three-down profile is worth sacrificing touches from pass-catching specialists Tarik Cohen and Mike Davis. For this week, I project Montgomery for a dozen or so carries with a chunk of touchdown equity given the Bears’ 25-point total, making Montgomery an RB2/3 despite my overall concerns. … Tarik Cohen is facing poor game script, given his pass-catching role and the point spread (-3.5), and Cohen will also lose snaps and touches to Montgomery and Mike Davis, who quietly caught 34 passes in Seattle a year ago. Cohen has enough juice to have a few RB2 weeks, but this isn’t a week to bet on that happening.

Editor’s Note: Stay ahead of the competition from wire to wire with rankings, customizable projections, trade evaluator, exclusive columns and more in our Season Pass. And start using optimized lineups on Yahoo!, DraftKings and FanDuel with our DFS Toolkit!.

Aaron Rodgers and the Packers' offense will look vastly different under new head coach Matt LaFleur, who wants Green Bay to run the ball more. Since Rodgers didn’t play in the preseason, the Packers will have to work the kinks out on the road against the Bears’ top-end defense. To make matters worse, the Bears are one of the slower-paced teams with a lead -- remember Chicago is a 3.5-point favorite -- so total play volume will be against Rodgers, too. The Packers’ 21.5 implied point total keeps Rodgers just outside of my top-10 quarterbacks in Week 1. 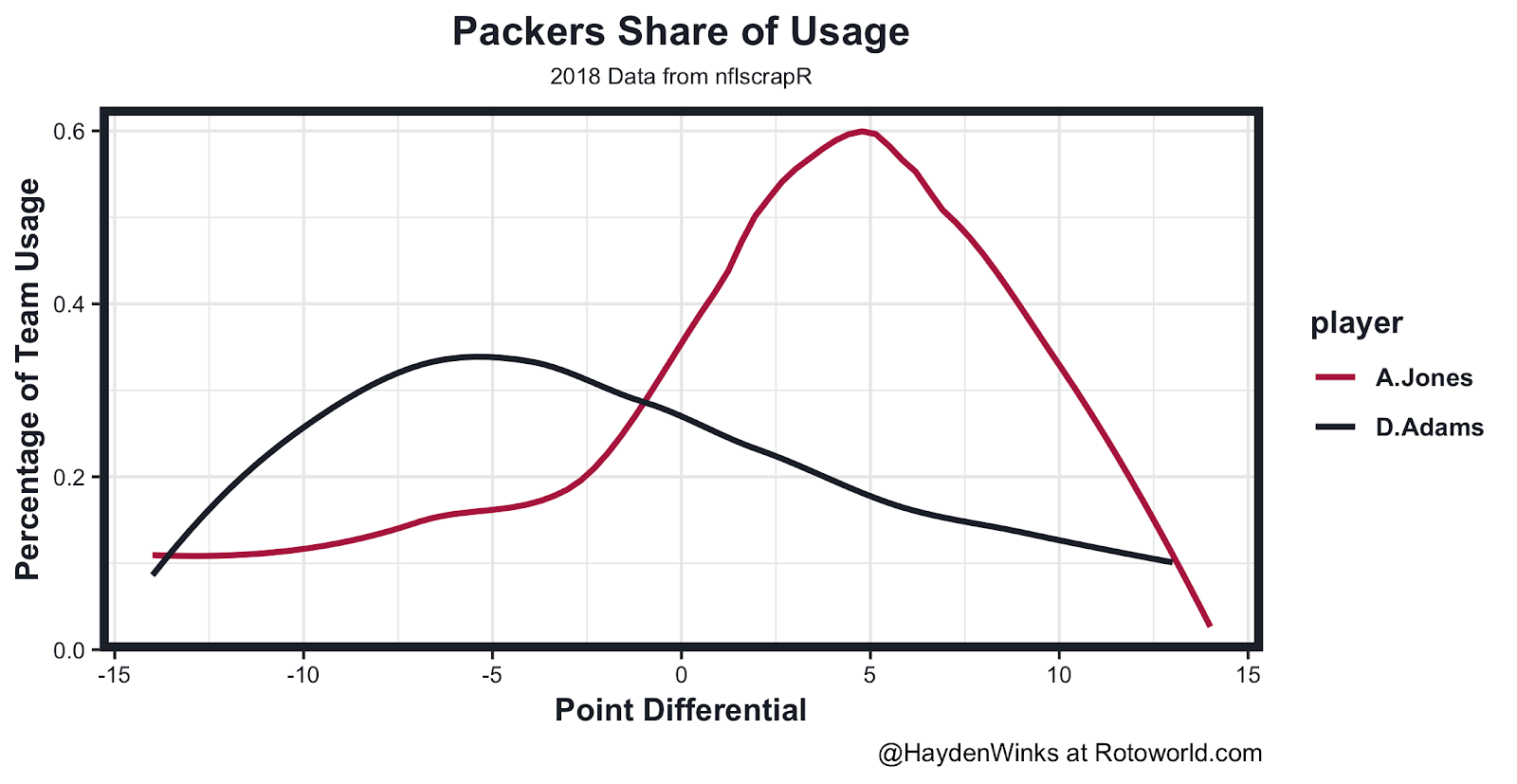 Davante Adams’ usage was more game script dependent than the other elite receivers last year -- his target share was much higher when the Packers were trailing -- but that isn’t such a bad thing this week given the point spread (+3.5). It’s just hard to envision a ceiling game with such a low team total. With that said, Adams earned every-week high-end WR1 status by either posting 80 yards or scoring one touchdown in every game last year. … With 6-foot-4 size and 4.37 speed, Marquez Valdes-Scantling is Rodgers’ top deep-threat, but his 52% catch rate makes him nothing more than a risky WR4 in a brutal matchup. … Part-time slot receiver and part-time outside receiver Geronimo Allison stands to benefit from Rodgers’ 25% target share to slot receivers, and Allison might have the best WR-CB matchup on the team. That keeps him in the WR4 mix despite the low total and my concerns with play volume. … 32-year-old Jimmy Graham is a TE2 this week in a tough matchup after coming off a season in which he only averaged 39.8 yards per game.

Aaron Jones looks to have finally shaken Jamaal Williams, but he’ll need increased pass-catching volume to earn a top-15 fantasy finish against an elite Bears’ front seven. If Jones’ role isn’t much different than last year (see above chart), then Jones will bust on Thursday Night Football. Luckily, LaFleur has talked about getting his running backs involved as receivers, so I'm still optimistic that he can cash in an RB2 finish.

The rest of the Fantasy Football Forecast will be posted on Friday morning. If you can't wait that long to make a sit/start decision, you can send me a Tweet @HaydenWinks.