Hassan Whiteside stole the show on Monday night with his career-high 27 points against the Nets. Nobody had Whiteside turning into a 19-point, 13-board, three-block guy this season after what looked like a peak in 2014-15. Well, that’s what he’s turned into these days. Since the break, Whiteside averaged 18.5 points, 13.4 boards, 3.3 blocks, 0.7 steals and 1.8 turnovers on 61.5 percent from the field and 79.0 percent from the line.

Compared to his pre-break numbers this season, his usage rate jumped up 2.7 points to 22.2, his true shooting percentage increased 4.3 to 66.2 and even his rebounding rate increased 1.9 after the break. Yes, so more volume, more efficiency, better on the glass and he’s even played 2.5 more minutes per game, too. He’s been crazy good.

The bump in efficiency is really due to one thing: free throw shooting. Shockingly, Whiteside has made 79.0 percent from the line since the break, which is up from 55.2 percent pre-break. He’s also taking 1.6 more attempts per game, too. His field goal percentage is actually down 0.2, as well. Here’s a look at his shot chart before the break (top) and after the break (bottom): 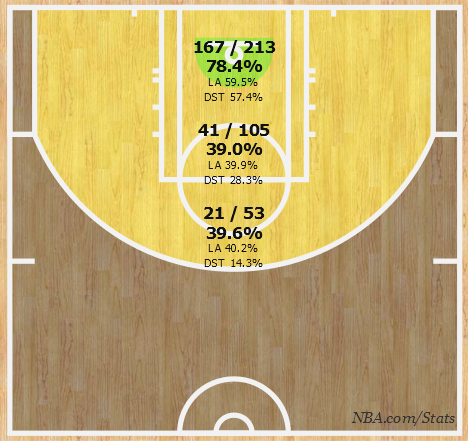 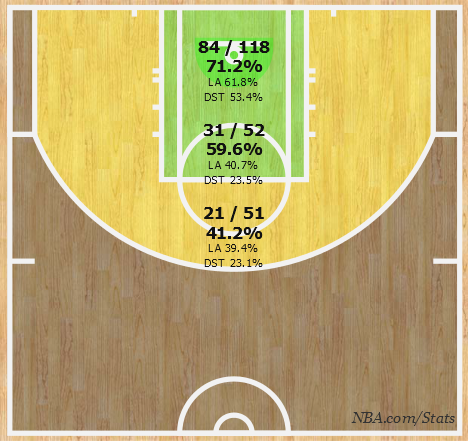 He’s not getting as many shots at the rim and he’s worse from there, too. Obviously the big bumps here are his terrific job on non-restricted paint shots and the big volume uptick on mid-range shots. On the non-restricted paint shots since the break, he’s an incredible 18.9 percent above league average while he’s even above league average on mid-range.

Taking it a step further, the types of shots he’s making is interesting. Here are his shot types since the break: 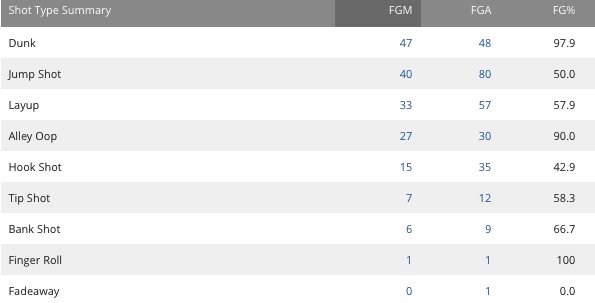 Wow, the 50.0 percent on jumpers is really impressive, especially after hitting just 36.5 percent pre-break. The sample size is pretty decent, too.

The other explanation is the Chris Bosh (blood clot) is out, so that’s really allowed Whiteside to flourish with more work in the offense. He’s emerged as the top big man in standard leagues since the break and in DFS, too. Just as Nets coach Tony Brown said on Monday night, it must be nice to be his agent right now. He’s going to get paid.

Klay Thompson is now the reigning Western Conference Player of the Week and for good reason. In his four games, he averaged 32.3 points, 4.0 boards, 1.5 assists, 0.8 steals and 7.0 treys on 51.7 percent from the field. Thanks to making those 28 treys, he put up a 69.9 true shooting percentage. Here’s his shot chart: 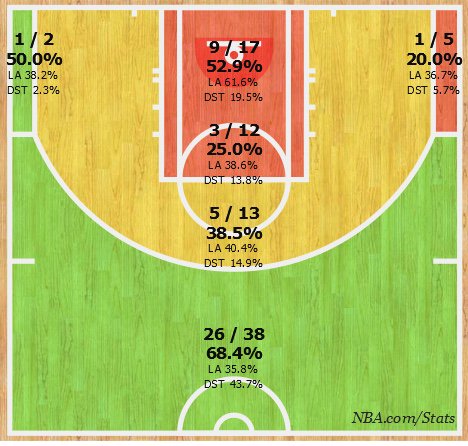 Why would he even take a two-pointer? There’s really no explanation needed here. Thompson had an 85.9 effective field goal percentage on his 39 catch-and-shoot attempts last week, so that's not bad. The Warriors are just ridiculous and it’s going to be almost impossible to beat them in the postseason. Basically, both Stephen Curry and Klay Thompson have to play three or four bad games on the same night in a series.

Hey so the Kings are resting guys. Coach George Karl said after the game they are planning to rest their best players, so that should mean we see some new rotations. We saw that on Monday in a blowout loss to the Blazers. Let's take a quick look at where their guys from Monday got their run:

The big story from Monday is Seth Curry scoring a career-high 21 points with four boards, one dime, two assists and three 3-pointers in 34 minutes. Curry is getting minutes at the one and two, which should continue. Ben McLemore is getting all of his run at the two and he did not have any lineup combos with Curry and Darren Collison. B-Mac also missed all seven shots from the field. Hopefully, Karl just unleashes Seth Curry. On the nights the Kings rest guys, Curry should be very attractive as a play in DFS. I would definitely consider adding him in 14-team leagues, too. If DeMarcus Cousins had a keeper league, he'd add Curry right now (via The Cauldron from Sunday):

Willie Cauley-Stein might finally be free. He’s been under Karl’s thumb for almost the entire season, but came up big on Monday with 13 points, 14 rebounds, two assists, one steal and one turnover. He looks like he’ll be crushing the rest of the way regardless of rest. Obviously, if DeMarcus Cousins doesn’t play, Boogie's league-leading usage rate coming out of the equation bodes well for everyone.

Darren Collison has logged most of his minutes at shooting guard lately, but he is the main man at the point while Rajon Rondo (toe, shoulder, thumb) is out. Rondo should miss at least a couple more the rest of the way, so Collison should be great. He actually wasn’t very good in a favorable matchup on Monday, scoring 10 points with two boards, seven assists, three steals and two turnovers. He should still be a very strong target most nights. You also have to like Omri Casspi despite how he hasn't played well lately.

Kosta Koufos clearly benefits when Boogie doesn’t play. With Cauley-Stein getting unleashed, Koufos won’t have much value when the Kings aren’t resting players. The same thing goes for Quincy Acy because he barely plays with Boogie in the mix.

It was a good night to be a Powell on Monday night. Dwight Powell (16 points) and Norman Powell (18 points) both hit career-high scoring nights. I'd keep an eye on Norman because the Raptors could rest their players now that they're falling behind the Cavs. It doesn't sound like Terrence Ross (thumb) is in a rush to come back. As for Dwight, coach Rick Carlisle has really mixed it up. The Mavs are going small a lot, but their next two games are against the Knicks and Pistons. I'd think Salah Mejri gets back in the mix after a tailspin in his last two.

A lot of teams are getting awfully close to being knocked out. Here are the teams already out: 76ers, Lakers, Suns, Nets, Wolves, Pelicans, Knicks, Bucks and Magic. The Kings also have a top-10 protected pick and will be the next team eliminated -- yes, that's why they're "resting" guys. The lottery right now is pretty interesting, via Tankathon.com: 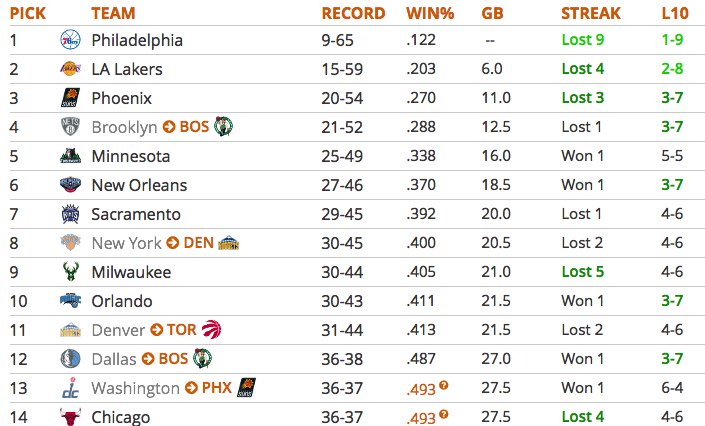 Interesting. The Nets and Suns are in a tank fight for 3-4, so Celtics fans should be big-time Suns fans right now. The Celtics also could have the Mavs pick in the lottery, too. The 6-11 spots in the lottery are also really close, so some expert tanking could be big in the lottery. The Bucks and Magic could also benefit from tanking. Happy tank season, everyone!