Stats: A View to Thrill

It happens all too often when a player kind of seems like he's not the centerpiece in a trade, but a breakout totally changes the perception. Tobias Harris wasn't getting playing time with the Bucks and was not the focal point of a deal that sent sharp-shooting, highly-coveted J.J. Redick from Orlando to Milwaukee in 2013 -- Redick bolted for the Clippers after 1.5 months -- and Jae Crowder was an afterthought in the Rajon Rondo deal last season.

Will Barton was essentially just a piece to make the money work for the Nuggets when they got a 2016 first-round pick from the Blazers in the Arron Afflalo deal at the deadline last year. Now, Barton is dominating as a Most Improved Player candidate.

Last season, Barton only had a 20.2 usage rate and a 50.3 TS%, so a six percent bump is pretty nice. Like most scoring guards, the improvement comes from outside of the paint. Here’s a look at Barton’s shot chart from this year (top) and last year (bottom): 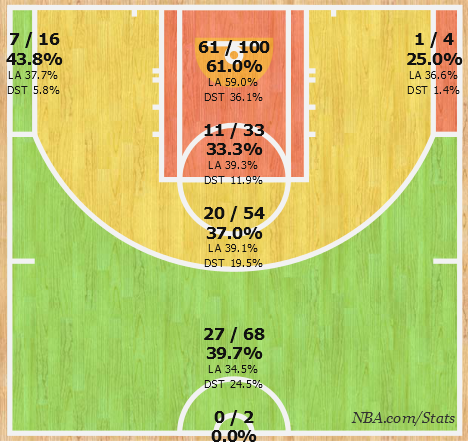 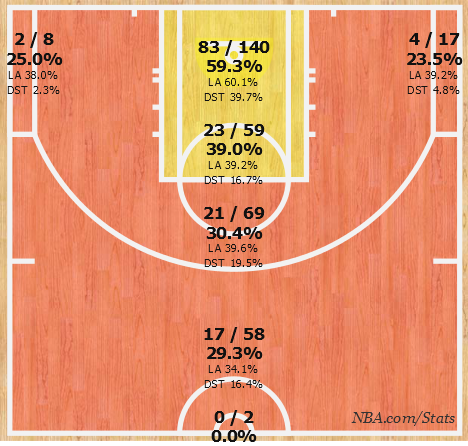 His distribution on mid-range shots is identical, but he’s up 6.6 percent this year. Plus, the 3-point shooting is obviously the big difference and that really explains the increase in efficiency by itself. He’s taken 31.7 percent of his shots from deep, which jumps up from 23.5 percent, and he increased his total 3-point shooting from 27.1 to 38.9.

The biggest difference for Barton is how much he’s scoring on catch-and-shoot shots. Last year, only 31.4 percent of his shots were without a dribble, but that’s up to 42.8 percent this year. Typically, that’s a really good sign and Barton also increased his effective field goal percentage (eFG%) on those shots 9.8 percent, too. When he’s scoring off the dribble, his effectiveness is really similar, so that’s another good sign of this increased output being sustainable.

Of course, there is the no Emmanuel Mudiay factor now. The rookie has a 26.3 usage rate in this season while he’s also posting a pathetic 38.0 true shooting percentage in his 29.1 minutes. Plus, he plays next to Barton for 11.3 minutes per game.

So if he’s really better, is he going to earn consistent playing time? It looks like it. Barton has played at least 31 minutes for a season-high five consecutive times and counting. Barton is getting a little more run at shooting guard right now, but most of his time comes at small forward. While that might sound bad because Danilo Gallinari is there, it really isn’t. In that five-game stretch, Gallo played a whopping 42.4 percent of his minutes at power forward. So there’s your Barton uptick right there.

On the reality side of things, he’s an absolute steal for the Nuggets at $3.5 million per year for two more seasons before he’s an unrestricted free agent, so the Nuggets won't be dealing him. If you own him, you are going to have a fun ride. He probably won’t be a third-round guy like he is now, but top 60 seems totally doable for standard leagues.


Sticking with the Nuggets, Gary Harris has been busy in his last two games since returning from a concussion. The Nuggets put him out there for a whopping 42.0 minutes per game in those two wins. His defense has improved a little bit, but the story has been his offense lately.

In his last eight games played, here’s his shot chart: 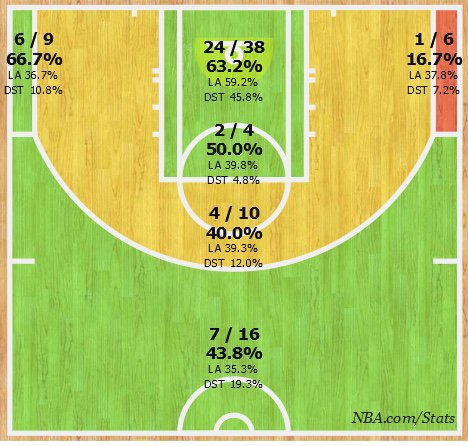 That’s a pretty shot chart right there. He’s getting 46 percent of his shots at the rim and he’s converting above league average at his 63.2 percent. Of course, you have to love the low mid-range shots and the high volume efficiency on those treys.

Why? It’s all about touch time. In that eight-game run, Harris has a touch time of less than two seconds 68.7 percent of the time. Plus, he’s been open a lot too. On his 41 shots from beyond 10 feet in his last eight, he’s only had a defender within four feet of him seven times.

Harris won’t be playing 42 minutes per game, but we can probably expect him to be in the mid-30s. If he is going to take treys, get to the rim, make free throws at his current 81.8 percent clip, and keep his steal rate similar, he should have value in standard leagues. I’d pick him up almost everywhere to see what happens.

George isn’t your usual forward. He’s basically a shooting guard with his shot distribution and takes a ton of jumpers. Generally, the more jumpers, the more inconsistent a player is — Stephen Curry notwithstanding.

However, PG’s not just missing shots. He is making it a lot harder on himself. Here’s a look at his shot chart in his last four (top) and his first 19 games (bottom) of the season: 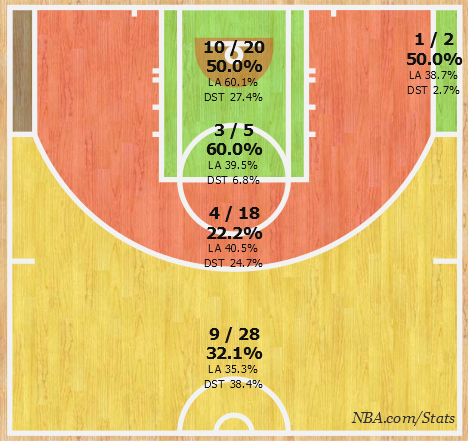 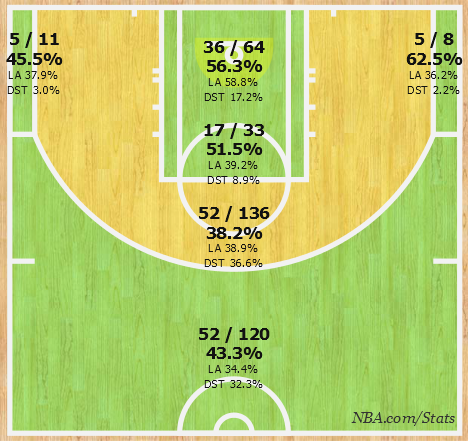 The obvious difference is that he’s been awful on mid-range shots and he’s not automatic on treys. The good news is that he’s getting to the rim more, which makes sense because teams are guarding him a little tighter now.

George actually hasn’t been a great isolation scorer and he’s just 47.7 percentile on the year. There have been some comparisons to Kevin Durant, which is just not true with KD as one of the best iso scorers maybe ever. Anyway, George has really made his money on PNR as the ball-handler this year, which isn’t a surprise in coach Frank Vogel’s offense. Also unlike the usual shooters, George does most of his play-making on the ball. On the season, his off-ball offense — plays like spot-ups, hand-offs, cuts and off-screen — only accounts for 32.0 percent of his possessions. That’s another thing that can help defenses key in on PG.

Speaking of which, he’s really seen an increase in tight defense. Here’s a look at his off-dribble and closest-defender numbers from his cold four-game stretch (top) and previous 19 games: 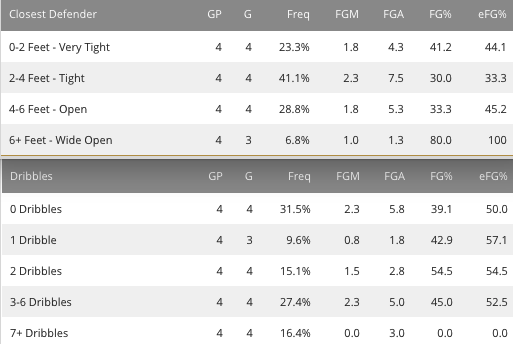 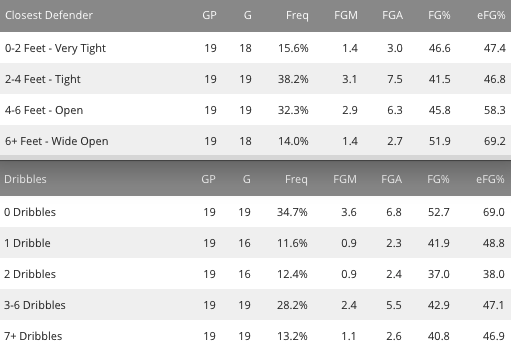 Everyone knew PG wasn’t going to be as great as he was in November, but this recent cold spell is really a perfect way to illustrate how perimeter scorers can struggle. If you own him in fantasy, your sell-high window is probably closed and it doesn’t help he didn’t put up top-25 value in January-April in his breakout year back in 2013-14. I’d peg him as a top 10-15 guy going forward and not the No. 8 guy he is right now.

One other interesting thing was how much PG mania was taking over in late November. I took a Twitter poll asking people if they prefer KD or PG for nine-cat leagues, here were the results.

Crazy. KD would easily be No. 2 pick in my eyes. KD is putting up the quietest high-volume 50/40/90 of all time on the season. Let’s end the column on KD’s shot chart for the season: 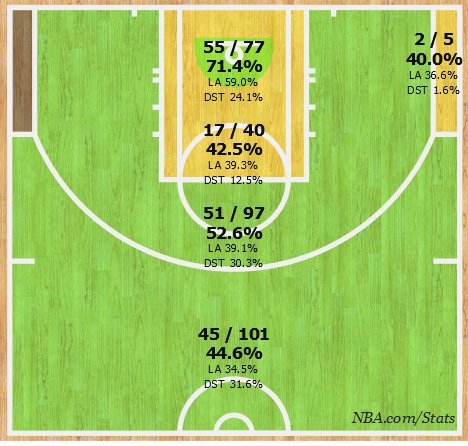 New podcast! It's mailbag and DFS this time with Jonas Nader (@JonasNader)