At the conclusion of a recent Numbers Game column, I discussed how usage rates correlate to fantasy values. You can read more about that by clicking here, and today's column expands the concept of correlations to compare every major statistical category to overall values, as well as other stats. For instance, we’ll see that among the top-200 players there is no meaningful correlation between percentages (FGs or FTs) and fantasy values in 8-cat, 9-cat or points-based leagues. That’s just one of a few surprising outcomes.

As an example, consider the results for usage rate – the percentage of a team's plays 'used' by a player while on the court.

This simply says that when a player's usage rate increases, there's been a strong correlation to points-league values also increasing. The relationship was also strong for 8-cat, but only moderately so in 9-cat -- this is because turnovers, which are very damaging in 9-cat, are included as part of the typical 'usage rate' equation. If you're looking for a solid streamer in points-based DFS, for instance, you could start by viewing recent usage rates. Josh Jackson has a usage rate of 30% in his previous five games, way higher than his season-average 23.7%. His roto value has still been primarily for points and steals, but with so many touches his DFS price still looks like a bargain.

Let's consider how other metrics are related to fantasy value, beginning with categories. The table below shows each major statistical category's correlation to the fantasy formats under consideration -- 8-cat, 9-cat and the NBA's "official" points. We're looking at the top-200 players, on a season-long basis, so even if your league isn't one of those three formats, the sample sizes produce reliable, interesting results. (As usual, I've eliminated players who haven't played at least 10 games and/or averaged at least 15 minutes per game.) 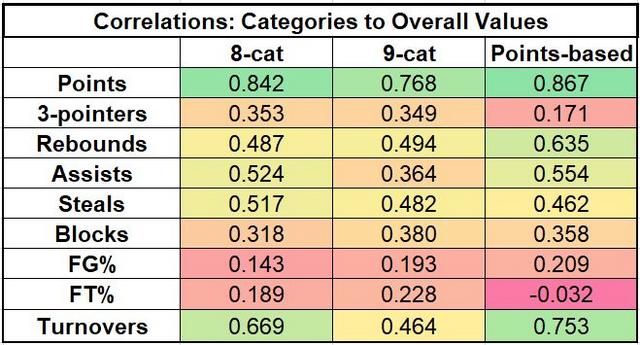 It’s immediately apparent that points are, regardless of which fantasy format we’re looking at, the most strongly-correlated statistic. To better understand the implications, here's a chart showing the various strengths of these correlations.

Turnovers directly damage fantasy values in 9-cat leagues, yet they still show a moderate positive relationship – when turnovers go up, there’s a reasonable chance fantasy value will also. This is a perfect example of the axiom that ‘correlation does not imply causation’. Increased turnovers aren’t themselves driving up fantasy values, but players who commit more turnovers tend to have the ball in their hands more often. That means more points, rebounds, steals, blocks, etc. In other words, turnovers show a positive correlation with fantasy value because they are also correlated to other stats. Just how strongly? Let’s find out.

Players who commit more turnovers are likely to have more points and assists with assists also showing a moderate correlation. That aligns with logic – your primary scorers and ball-handlers are simply in position to lose the ball more often. After all, the league leaders in turnovers this season are James Harden, Trae Young, Russell Westbrook, Ben Simmons, Giannis Antetokounmpo, Blake Griffin…you get the idea.

The biggest takeaway for me is that volume matters. Points and turnovers are the two categories with unambiguous, positive relationships to overall fantasy values. This analysis underscores the relationship between fantasy value and usage – I’ve never been keen to punt ‘points’ in category leagues, and doubt I’ll pursue that path ever again. I’m also more inclined to ignore turnovers in 9-cat, viewing them as a necessary evil to get those other gaudy counting stats. There aren’t many players like the early-2000s Shawn Marion, when he consistently hit top-five value while committing fewer than two turnovers per game. But I digress.

For a more nuanced picture of the relationship between points and other stats, and more, here is a table showing the correlation of every stat to every other stat (percentages are unweighted):

To some extent, these correlations fit the ‘common sense’ mold. The strongest negative correlation is 3-pointers to FG%. Davis Bertans leads the NBA with a 47.6% mark from deep, followed by 3-point contest winner Joe Harris, Seth Curry, Buddy Hield, Danilo Gallinari and Stephen Curry, but those are the only six qualifying guys above 43.3%. It makes sense that 3-pointers have a negative relationship to boards and blocks, too, whereas those categories have a meaningful tie to FG%. After all, that’s the holy triumvirate of big-man stats (FG%, REB, BLK).

I was more surprised to see 3-pointers with only a weak relationship to assists and steals. I must still have a mental bias in which guards take (and make) far more 3-pointers. That’s true in some instances, of course, but just consider the list above – three guards are joined by three forwards with Harris, Gallinari and Bertans. Then you have mold-breaking centers like Brook Lopez and Marc Gasol, who have revamped their shooting range to adjust to the modern NBA, and a wave of stretchy big men already comfortable from distance.

As suggested earlier, I’ll be looking at these tables when I prepare for fantasy drafts next summer. Yet again, scoring has a unique distinction – it’s the only stat which is positively correlated with every other stat. The relationship to blocks and FG% is so weak as to be meaningless, but there are still moderate ties to 3-pointers and assists, with weak positive ties to rebounds, steals and FT%. I’m curious how much these correlations are weighted toward the ‘elite’ portion of the top-200 – if we looked at only players 75-150, would points still have such compelling correlations? Let’s find out.

I expected the relationship to decline as we moved beyond early-round players, but this is more of a shift than I expected. Refer back to the earlier table and you’ll see that points had a strong positive correlation to each of these fantasy formats – 0.768 and higher. With the focus trained solely on middle-round players with value in the 75-150 range, scoring doesn’t have any meaningful correlation in 9-cat, and it drops to ‘weak’ in 8-cat. It’s different for DFS/points leagues, which reward raw scoring so much that the positive correlation persists.

The de-emphasis on points in the middle rounds is a reminder that specialists abound. Kyle Anderson's season has been derailed by injuries, but he's still flirting with top-100 value despite averaging 8.0 points with a paltry 13.1% usage. P.J. Tucker is riding his 1.6 steals per game to strong specialist value, and his meager usage (9.8%) is probably a good thing -- he's shooting 39.1% from the field and 64.7% from the line, so you don't want his volume to increase. After the season, I may compile another correlations column looking at groups of 50 – the top-50 elite players, those in the 51-100 range, and so on. In the meantime, there’s plenty to consider in the tables above, especially ‘Correlations: Categories to Categories’. Let me know if you have any questions or insights, and good luck this week!