Today's column discusses multiple topics. We’ll begin with how players have performed through the first half of the NBA season, focusing on per-game production for 9-cat, 8-cat and the NBA's official points-league scoring. After examining those fantasy values, I'll address a key topic for season-long owners, which is how much of a swing there is toward younger players after the All-Star break. There is also a late-season schedule grid and a discussion of just how short the ‘post-break’ window really is – less than 1/3 of the season.

You can follow me on Twitter here (@Knaus_RW), and it’s never too late to check out Rotoworld’s constantly-updated fantasy hoops Season Pass!

Below are the fantasy values for the top-200 players (8-cat) through Jan. 15 this season, which is just about the halfway point. As usual, I've trimmed the data for clarity and relevance. Excluded are any players who have averaged fewer than 20 minutes per game (e.g. Jonathan Isaac, Dwight Powell and Gorgui Dieng) or appeared in fewer than 15 games (e.g. Mike Conley, D'Angelo Russell, Danilo Gallinari).

I calculated everyone's per-game value in 8-cat, 9-cat and the NBA's official points-league scoring system, which you can read more about here, here and here. I then sorted by overall 8-cat value and kept the top-200 players. These are the results:

For the second part of this column, I wanted to quantify how much younger players benefit late in the season. The common refrain is that young guys, especially those on bad teams, tend to earn more minutes as the season winds down. But is that a quantifiable trend? The answer, simply, is 'yes'.

The data below was mined from BasketballMonster, a terrific site with their own player rankings and a lot more – check it out here. They list player ages according to their current age, however, so for instance during the 2010-11 season it shows Shaquille O'Neal as being 46 years old. I corrected for this issue but can't guarantee 100% accuracy...nevertheless, the results show a clear and obvious trend with top-150 players getting markedly younger in the final months of the season.

The average age of the top-150 players lowered by 7.0 months after Feb. 15 last season. The top-150 got slightly older after Feb. 15 during the 2015-16 season, which is interesting but also a clear outlier – most years there's a big dip in aggregate ages. So yes, you should expect young players to earn more trust and leeway from coaches in the final weeks of the season. And yes, this will be most emphatic among rebuilding teams, so keep an eye on the standings.

We talk a lot about player values changing "after the All-Star break" or "post-break" and I want to clarify what that really entails. If you're waiting for your team to really get going 'post-break', you've already lost, because...

2) The first week after the All-Star break is Week 19, which is shortened – most teams plays twice.

3) Typical H2H fantasy playoffs start in Week 21 or Week 22, so you have basically no time to adjust if the guys you hoped would take off 'post-break' are still struggling.

4) Weeks 25 & 26 are often full of nonsensical lineups, G-League callups, rest days for veterans, etc., which makes it even harder to predict what's going to happen.

Here is a schedule grid showing how many games each team plays (per week and total) after the All-Star break: 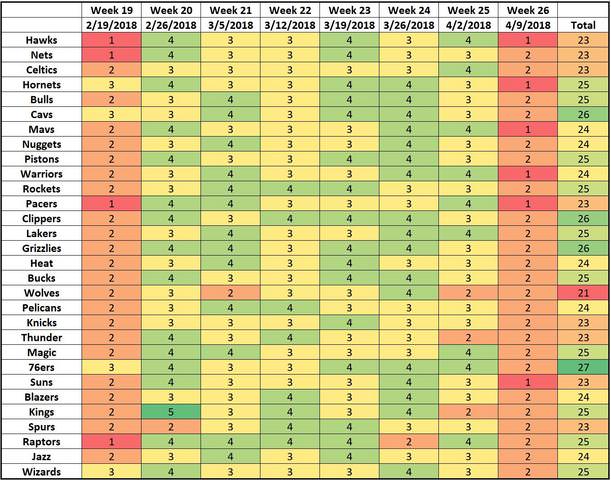 It's usually obvious which teams will unleash their youth, although we're waiting to see what happens with teams like the Clippers, Jazz, Hornets, etc. However, we know that the Hawks are rebuilding and guys like John Collins, Taurean Prince and DeAndre' Bembry could trend up in a hurry. Kings coach Dave Joerger literally announced that he's going to start resting older players and focus on developing talent – the Kings have five players older than 26 years old (Vince Carter, Zach Randolph, Garrett Temple, George Hill and Kosta Koufos). The list goes on.

We've gone over fantasy values for the first half of the season, post-break values, and more, but I'm always interested to hear what interests my readers. If you have insights, comments and especially suggestions for future column topics, let me know! Good luck this week.