Today's column looks at team-specific matchups through a few different lenses. First, we'll take a wide-angle survey of how lenient or stingy teams have been in specific areas. Need rebounds? Target the Kings, Wolves and Bulls. Need steals? Deploying a specialist vs. the Suns is a great bet, as they're giving up a league-high 10.5 steals per game.

After that, we'll zoom in on how teams have defended this season, using NBA.com tracking data. Is a team forcing opponents to take closely defended shots, or are they leaving shooters wide open? We'll put that information into action by looking at players who rely on specific situations more than most – DeAndre Jordan takes more than 2/3 of his shots while a defender is within 2-4 feet, a category in which the Warriors and Celtics give up the lowest points in the league. On paper, that's not a good matchup for him in the scoring column. To misquote Sun Tzu, "If you know the enemy and know yourself, you need not fear the result of a hundred [games]." The goal today is to know the enemy/opponent.

We begin with the overall data. I've included categories like 3-point percentage (3P%) and offensive rebounds (OREB) to satisfy owners with more than the typical 9-cat arrangements. I've also included the number of free throws opponents are making vs. teams, as a player highly dependent on the FT line (such as Lou Williams) can rise or fall on his ability to get to the line. Using made free throws, rather than attempts, helps to control for teams willing to intentionally foul poor shooters...and rewards teams who keep excellent FT shooters off the line.

Finally, you'll see personal fouls as a category. If you have players prone to foul trouble, such as Jaren Jackson Jr. or Patrick Beverley (who ranks second in fouls per game behind only Andre Drummond), the odds of increased playing time improves vs. teams that aren't proficient at drawing fouls. The Bulls, Magic and Cavs each draw at least six fewer fouls per game than the Thunder, for instance, and would therefore be 'safer' matchups for personal-foul magnets. 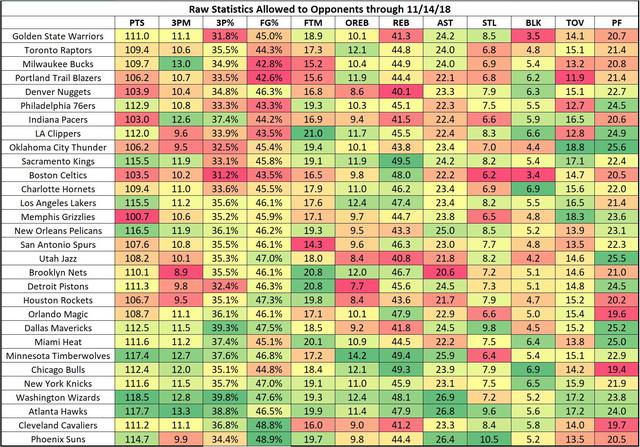 The second chart converts those numbers to z-scores, enabling comparisons of apples to oranges (or rebounds to FG%, to be more on-topic). 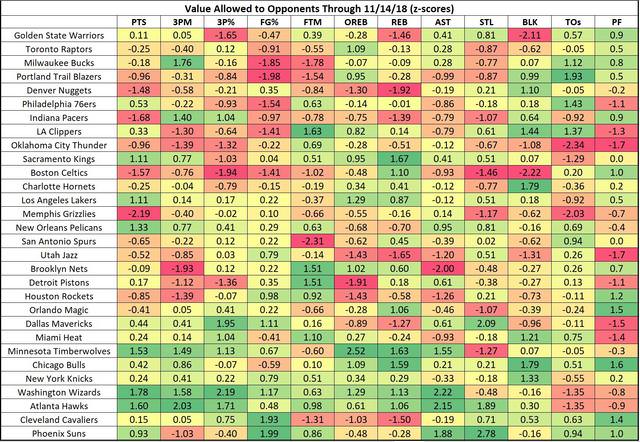 You can see in the first chart that the Bucks are giving up a lenient 13.0 triples per game, second only to the Hawks. On a pure category-specific basis, that's almost identical to the Wizards giving up 118.5 points, or the Hornets getting blocked 6.9 times per game. They're all fantastic matchups and now you can directly compare their relative values. You can also tally them up to determine an ‘overall’ matchup value, if you’re so inclined. All of this matchup-specific data leads to another crucial point -- keep a close eye on who you're playing this week in head-to-head leagues! Don't wait until Thursday to realize you need to quickly catch up in scoring, assists and FG% in order to get the victory. Most sites that host fantasy leagues have a page with cumulative data for each team, so it takes minimal effort to scout their strengths and weaknesses. If your opponent is No. 1 in blocks, there's no need to stream Maxi Kleber, etc. Use all the information available and you'll innately have the upper hand.