Today's column looks at one my favorite topics -- matchups by position. Whether you're streaming a point guard or choosing between two solid centers on a crowded Wednesday night (such as tonight's 11-game slate), knowing your opponent is critical. The Jazz have allowed fewer assists and steals to PGs than any team in the league over their past 10 games, for instance, so a potential streaming play like Trey Burke might not pan out against them on Saturday.

If you don't know already, Matchups by Position is a regular feature in the Rotoworld Season Pass! I post updates every few weeks, reflecting past-10-game stats, and subscribers get exclusive info about matchups vs. benches/starters, backcourts/frontcourts and more. If you have any questions, send me a note on Twitter or via email. There's a lot to cover so let's dive in.

Note: These are past-10-game stats for each team's opponents. I used HoopsStats for the raw numbers and similar cuts are available on NBA.com, Basketball-Reference and elsewhere. The main variable is how each site classifies players under positions, and I've found HoopsStats to be accurate. 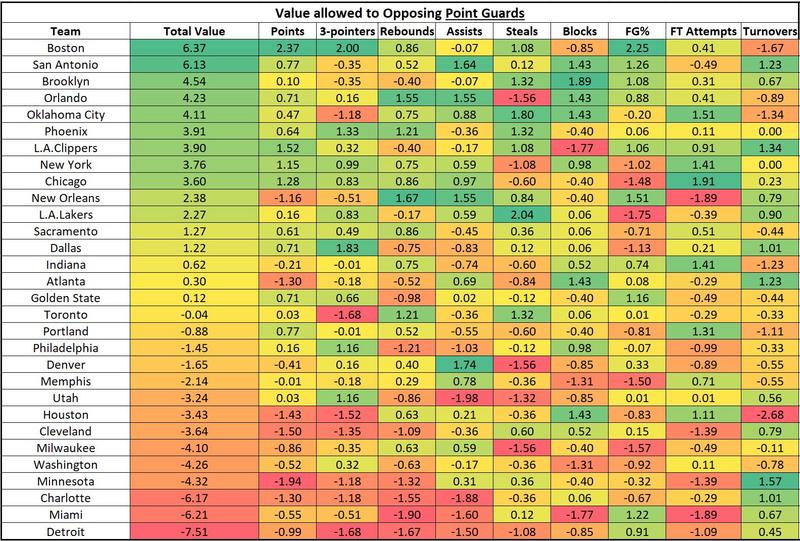 I've considered weighting these values for each position. If I did so, it would give more weight to assists, steals, 3-pointers and FT% for point guards, for instance, while centers would be skewed toward blocks, rebounds and FG%. I still might implement this but it's hard in a league where we have triple-double-machine Russell Westbrook at PG, Ben Simmons at PG, Brook Lopez as a perimeter-specialist center, etc. If you'd like to see the 'weighted' version of these matchups in the future, let me know and I may switch it up.

Regardless, the point guard matchup values are clear. The Spurs are getting shredded by opposing PGs, giving up the second-most assists while allowing point guards to shoot 46.2% from the field. It may not sound like much but that's among the highest marks vs. PGs. San Antonio's defense has been as bad as I can remember this season, and they have the league's 9th-worst defensive rating. The only team on pace for the playoffs with a worse rating is Houston. No team has been close to the Celtics for leniency vs. PGs, though, and on a per-48-minute (against starters and reserves) they're allowing 30.0 points on 48.0% shooting, 9.1 assists, 2.2 steals and a monster 3.9 triples. No other team is allowing more than 27.5 points to PGs, and only the Mavs come close to giving up as many 3-pointers as Boston. 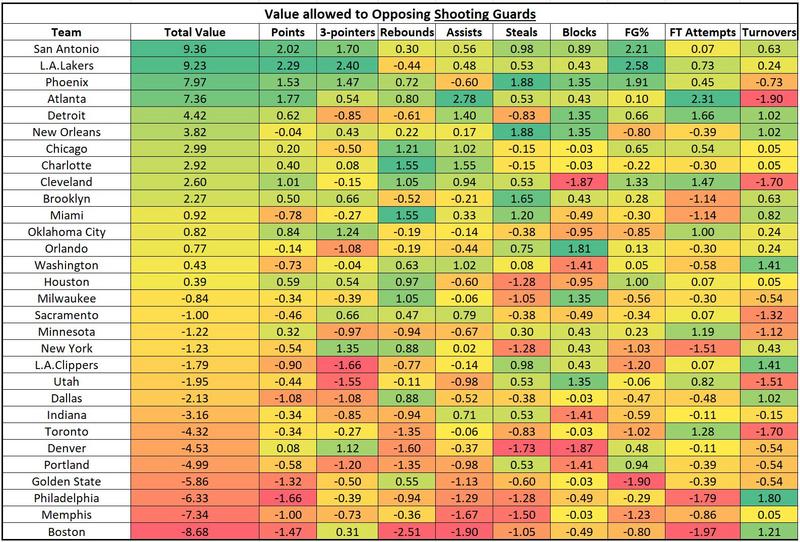 In a Shyamalan-worthy twist, the Celtics emerge as the stingiest team vs. SGs in their past 10 games, despite being the best team to face for PGs. They play the Bucks on Thursday (Feb. 21), for instance, so I'd be more inclined to play Eric Bledsoe than Malcolm Brogdon for DFS. If you have a hybrid-type guard like Lou Williams, that's where the other data cuts come into play. By heading to the Season Pass, you can check how bench players have fared vs. the Celtics, and how backcourts overall have fared -- in this case, the Celts are middle-of-the-pack vs. bench players so I'd be fine rolling the dice on Lou.

At the other end of the spectrum we once again have the Spurs getting roasted by shooting guards, followed by the Lakers, Suns, Hawks, Pistons, Pelicans and Bulls. That's not good company if you're San Antonio, who are holding onto the No. 7 seed by a slim 1.5 game margin. Based on their play the past few weeks you should just fire up your guards against them and assume they'll go off -- good news for Kyle Lowry and Danny Green (in a potential revenge game) on Friday, as well as the Knicks' and Nets' guards on Sunday and Monday. There are plenty of 3-point specialists but they abound in the SG position, which makes the Lakers a team to target. L.A. has allowed opposing SGs to make 4.9 threes per game which is crazy. Oh, and they get James Harden and the Rockets on Thursday. Good luck. 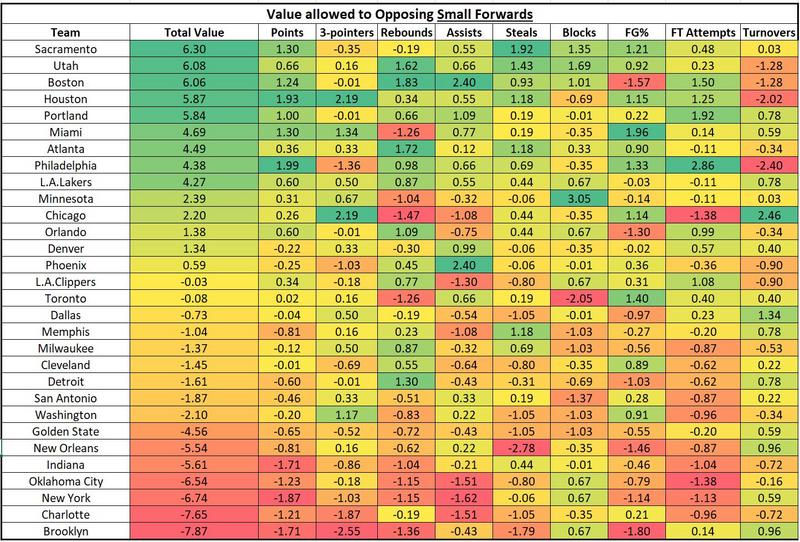 The Nets and Knicks don't scream 'lockdown wing defense' to me, but that's why I just follow the numbers. Small forwards are averaging a mere 13.6 points vs. the Knicks over the past 10 games, on 38.9% shooting, while the Nets are allowing only 14.2 points on 36.3% shooting. Compare that to the Sixers, for instance, who are giving up 28.1 points on 48.3%. That's a massive disparity and it makes me leery of playing a guy like Jake Layman (as red-hot as he's been) against Brooklyn on Thursday. Layman gets the Sixers on Saturday, in fact, so we'll see if his production swings based on the matchups. We're talking about what has happened, after all, and trying to use that as a predictor of what will happen, but there are always exceptions.

One more 'let's see' scenario to watch -- the Kings have been the most lenient team vs. SFs on an overall basis, nowhere more than steals. Opposing SFs are swiping 2.3 steals in the past 10 games, and they'll be up against Paul George and the Thunder on Saturday. I'd pencil PG in for a conservative 3-4 steals in that matchup. 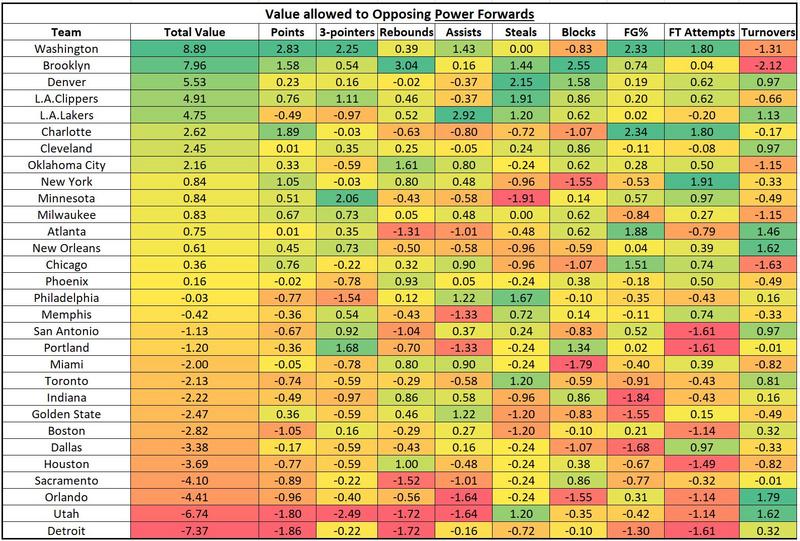 Apparently, the sight of Jeff Green hasn't inspired fear in the hearts of opposing power forwards. The Wizards are getting smashed to the tune of 29.8 points on 54.8% shooting, 10.4 boards, 5.1 assists, 1.4 steals and 0.7 blocks per 48. They've also giving up a ton of 3-pointers, so fire up your stretch-fours when D.C. is on the schedule. The Nets, Nuggets, Clippers and Lakers round out the top-five best matchups in recent weeks for PFs, but you may want to avoid the Pistons and Jazz. They've been by far the toughest teams to face. 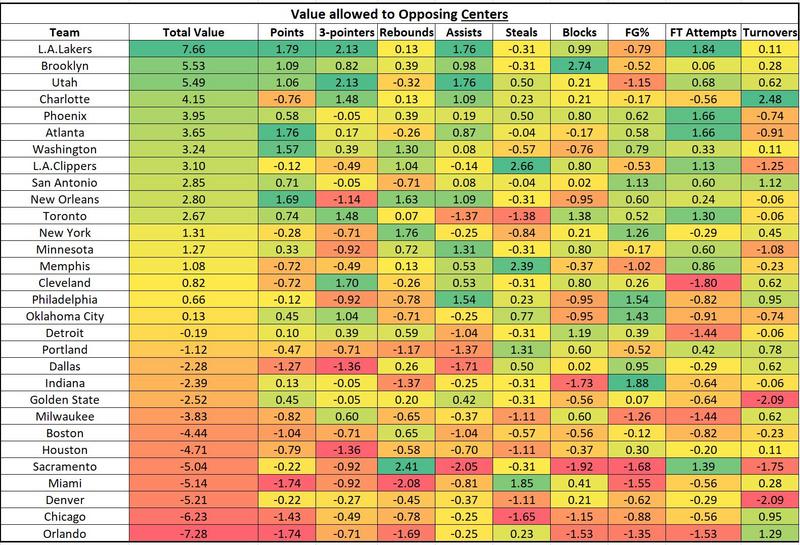 I didn't dive into the Nets under PFs because I knew they'd come up here. I thoroughly enjoy watching the Nets and Jarrett Allen, particularly when I have my centers up against them. I can attribute a handful of DFS victories this year specifically to targeting the Nets -- I'm relentless about playing Cs vs. them and it's let me down only a couple times. Seriously, try it. The Nets get the Blazers next Thursday and the Hornets next Saturday. Jusuf Nurkic should go off and will be a likely target, and I might even overcome my deep aversion to Cody Zeller just due to the matchup.

As I mentioned earlier, centers and point guards are two positions where you're typically looking for specific categories. Even in points leagues and DFS, you typically need your big guys to rebound the ball, block shots and shoot efficiently to hit value. The Nets are comically ahead of the pack in terms of blocks by opposing Cs -- they've been swatted 3.5 times per game while no other team is above 2.8 (Toronto). The Kings and Pacers have been extra stingy with blocks-allowed, though, which is bad news for low-end options like Derrick Favors, Khem Birch, Maxi Kleber and Robin Lopez. The toughest teams to rebound against from the C position have been the Magic and Heat, with Nikola Vucevic and a resurgent Hassan Whiteside doing their best to gobble up the boards. If you're on the fence about playing a center, especially if you need rebounds, first check if they're playing vs. a team from Florida.

That will do it for this edition of the Numbers Game! As mentioned earlier, there's more to be found in the Season Pass (latest update posting Thursday). Send me any questions or insights you might have, and good luck this week!