Fantasy owners are always looking for a competitive advantage, particularly when playing the waiver wire or building daily lineups. If you're choosing between similar players on a busy Friday night, should you prefer Mike Muscala vs. the Clippers or Marvin Bagley III vs. the Lakers? The matchups are similar for opposing big men, but we can look at each player's expected range of values as a deciding factor. To get there, we'll expand on last week's NBA Consistency & Volatility, using that data to project players range of likely fantasy values -- in fantasy parlance, we're establishing their 'floor' and 'ceiling'.

Let's use Wesley Matthews as an example. The veteran has averaged a modest 23.7 fantasy points per game this season (according to the system endorsed by the NBA and used by Yahoo, FanDuel and more sites). He's also had a remarkably low standard deviation (basically, the amount to which his fantasy output varies night-to-night) of just 5.6 fantasy points. That made him the 26th-most consistent player in last week's analysis, and we can posit an expected range of values between 18.12 (floor) and 29.26 (ceiling). We don't need to examine the math behind it, but there's a roughly 68% chance Matthews will fall between those values. If we want even greater certainty, we can say there's a 95% chance that he'll fall between 12.6 and 34.8.

Editor’s Note: If you love Fantasy Basketball, you have to be playing on DRAFT. It's daily fantasy basketball snake drafts instead of salary caps. They take minutes to complete, and there's even auction drafts! No more setting lineups or constantly worrying about pros, just draft and win! Right now DRAFT is giving Rotoworld readers an exclusive FREE entry into a real money draft when you make your first deposit! Here's the link!

Before looking at floor/ceiling values for the top-200 players, I want to share a few charts sent to me by reader Danon Gabriel The! He visualized the data from last week's column and it's worth taking a minute to soak up the results. 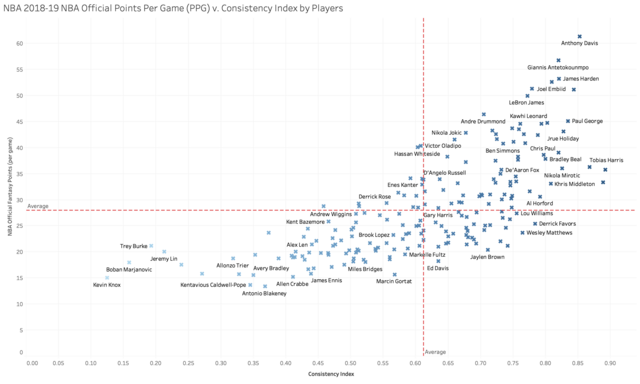 Here is a closer look at the bottom right quadrant -- players who don't score many fantasy points but can at least be relied on for consistent production. Derrick Favors stands out, along with Lou Williams, Jaylen Brown and the aforementioned Wes Matthews. Low fantasy points but high consistency: 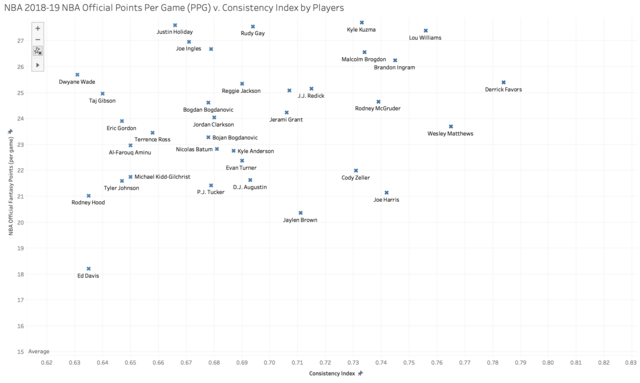 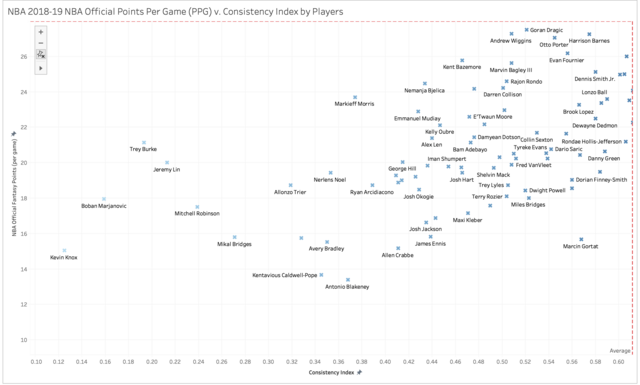 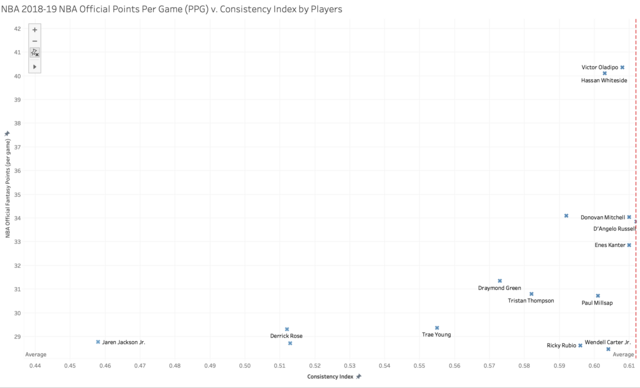 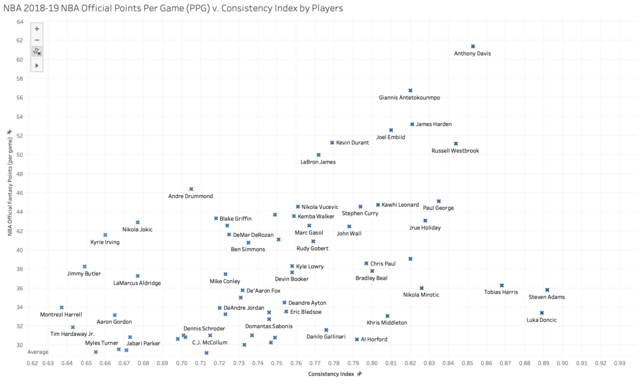 Thanks again to Danon for those great charts! The effort is much appreciated. We won't stop there, however, as the floor and ceiling await.

When looking at these charts, remember that the values under '1SD' represent the expected fantasy-point range in nearly 70% of games. I've arranged the players in descending order, from highest to lowest ceiling.

As you can see, the highest-ceiling players are not created equal. Anthony Davis and Russell Westbrook have relatively low differences between their expected floor and ceiling values, whereas guys like Hassan Whiteside and Victor Oladipo have been all over the place. As I mentioned last week, these numbers do not include DNPs, but they do include injury-shortened games -- that's just one more form of inconsistency.

If you're tired of an inconsistent guy like Donovan Mitchell, consider targeting similar players near him in this list but who have lower floor/ceiling disparities. Jrue Holiday has been terrifically consistent, for instance, as have Zach LaVine and Bradley Beal. The glaring red blotch under Jaren Jackson Jr. is no surprise, of course, but I didn't expect to see Derrick Rose, Julius Randle and Jimmy Butler show real inconsistency. I might just have a blind spot for that trio since I don't own them in any leagues this season.

Tobias Harris and Steven Adams were highlighted last week as being extremely consistent, and that's worth mentioning again. Yes, their ceilings don't look great since they're buried in the middle of the top-100 in this analysis. But then again, they both have a floor of 31+ and that's invaluable in most fantasy formats -- Otto Porter and Jarrett Allen might burn you any given night, but owners know what they're getting from Harris and Adams.

Look over the data and see how your teams fare. Are you too heavily invested in high-risk rookies like Kevin Knox, Trae Young and Jaren Jackson Jr.? If so, try to rebalance your team with lower-risk options via trade and/or the waiver wire. Do you tend to target stars with huge gaps between their floor and ceiling, resulting in frustrating DFS losses? Betting on sheer upside can pay off in tournaments, for instance, but you might opt for higher-floor guys in 50/50 and smaller leagues. There are many ways to apply this data and I hope it helps RW readers! If you have any questions or insights, you can find me on Twitter @Knaus_RW.