Today's column provides a sneak-peek into the Rotoworld Season Pass, including team-vs.-position charts for point guards and shooting guards, excerpts from recent columns, and more. I will re-do the team matchups analysis every few weeks, exclusive to the Season Pass!

If you haven't subscribed yet, now’s the time. In addition to the updated charts, there is a ton of content including schedule analysis, custom scoring systems, weekly stat projections, positional ranks, daily pickup recommendations, Buy Low/Sell High, Deep Waiver columns, and much more.

For instance, the following charts show how lenient or difficult each team is against a specific position – point guard and power forward are included here, and every position is available in the Season Pass. As usual, I'm using the NBA’s “official” points-league scoring system, which is identical to FanDuel, DRAFT and Yahoo default points leagues. 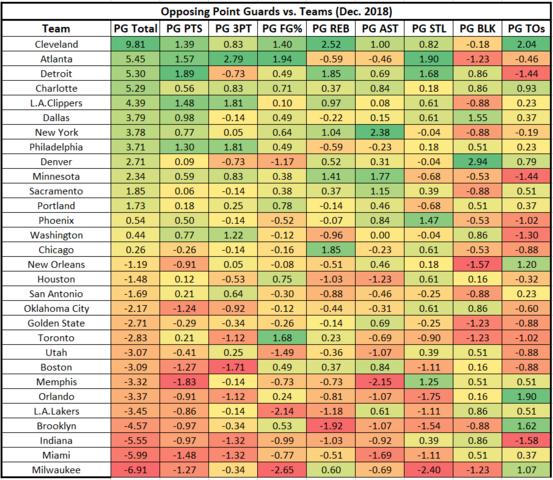 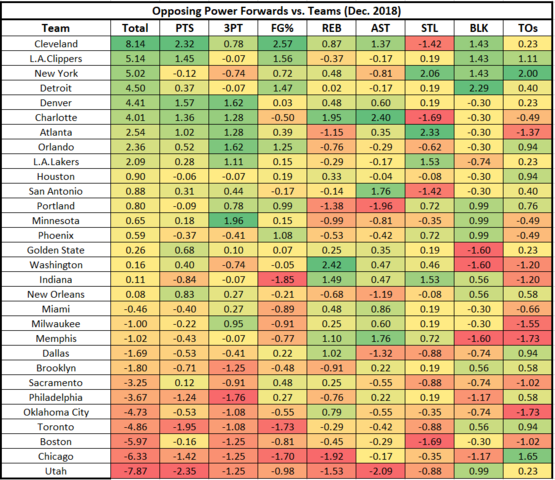 For matchups vs. small forwards, shooting guards and centers, head over to the Pass! Below are some excerpts from recent SP-exclusive columns by the Rotoworld crew.

Dipo was a popular pick at the turn of the first and second rounds this season after finishing 10th in per-game value (9-cat) last season, but so far he hasn’t lived up to his price with a per-game rank of No. 37. And that doesn’t include the 11 games he missed due to injury. He’s been rusty since returning with 16.8 points, 6.2 assists, 5.2 rebounds, 1.8 steals, 1.4 triples and 3.2 turnovers on 40.5% shooting over his last five games, and his shot volume is down along with his usage (roughly 5%).

That tells me that he’s simply not 100 percent yet, and rust is obviously a factor as well. We’ve heard numerous reports including from Woj that his knee is structurally sound, so I don’t think it will be long before he returns to his elite ways. I’d be looking to buy-low by offering a player in the 20-30 range. The Pacers are 4th and will be jostling for playoff seeding, so that plays in his favor as well.

Ingles is currently ranked 87th on a per-game basis after finishing just outside the top-60 (9-cat) in 2017-18. He was in a brutal slump with four games with single-digit points across a five-game span before finally getting hot vs. the Warriors on Wednesday when he scored 20 points (7-of-13 FGs) with three rebounds, three assists, two steals, and four 3-pointers in 35 minutes. His value is built around his points (12.0), assists (4.6), steals (1.6) and triples (2.2), but there’s still room to grow because he’s shooting just 38% from deep compared to 44% in his previous two seasons, and his current mark from the FT line (66%) is way down from previous years (a career 74% shooter).

You can get him pretty cheap right now, maybe even for a guy outside the top-75. For example, I just saw him get traded for the injury-prone Derrick Rose in one of my leagues. Hopefully his big game against the Warriors didn’t shut the buy-low window.

Another reason for his downfall may be his increased mid-range shot attempts. Only 14.5% of his shots came from the mid-range at the start of the season, but that number spiked to 35% in his last six games. Coach Mike Budenholzer is not going to be happy about that as a big believer in the 3-point shot, so expect to see a change in Middleton’s mindset soon. If you can get Middleton for a player outside the top 30 or 40, I’d do that in a heartbeat.

Pickups of the Day

Josh Hart - He's been very disappointing based on pre-season expectations maddening to own for those who stuck with him. He had 11 points, three rebounds, three assists, three 3-pointers and one block in 27 minutes on Sunday, though, which is a reminder of why you love(d) him.

Garrett Temple - I'm not happy about this, either, but hear me out. Minutes haven't been an issue this season and the veteran's offense has picked up lately with 12.4 points, 2.0 triples, and 55.8% shooting in his past five games. He's adding 1.6 steals and 1.6 blocks in that span and the numbers are even higher if you toss out his mediocre line on Dec. 15.

Rodions Kurucs - Nets coach Kenny Atkinson said it'll be hard to take Kurucs out of his lineup if he continues to play this well, and fantasy owners might echo the notion. He scored 24 points on Friday and notched 16 points with 10 rebounds, two assists and one block on Sunday, marking his fourth straight game with a block.

Ed Davis - The veteran continues to produce for Brooklyn and he finished Sunday's game with 15 points, nine rebounds, three steals and one block. He made 7-of-8 shots and the bad news was his 1-of-7 mark from the FT line -- then again, if you're plucking centers off the wire you can't be too choosy. Davis continues to split minutes evenly with Jarrett Allen (11 points, nine boards, two assists, one steal) but his ownership is nowhere near Allen's.

I’m trying something new this week. Rather than put all the players into one big (and possibly confusing) collection of names, I’m sorting them into two separate categories:

1) Standard League Considerations (pretty self-explanatory — players I can in theory make a case for adding in a 10- or 12-team league);

2) Deep League Ridiculousness. This category includes everyone else.

Reggie Bullock (25 percent owned in Yahoo leagues): On the Rotoworld fantasy hoops podcast the other day, Steve Alexander said (of E’Twaun Moore — and I’m paraphrasing here): He’s a player I want to get into my lineup for a hot streak during a four-game week, and then move on. That about perfectly sums up how I feel about Bullock, who has scored 15, 24 and 33 points (24.0 ppg) with a total of 16 treys his last three games. There’s virtually no way this hot streak lasts, and no telling when it’ll be over, but feel free to throw Bullock into your lineup for a minute and see what happens.

Justise Winslow (22 percent): He’s been dealing with an ankle injury and sounds very iffy for Thursday’s game. He has also cooled off considerably of late. I mention him though because with Goran Dragic (knee surgery) expected to miss two months, Winslow could get plenty of opportunities to run the offense and get hot again in the weeks ahead. If we’re adding Heat players though, I would much rather go get this guy

Derrick Jones Jr. (17 percent): I’ve been talking about Jones Jr. wherever I can lately, simply because we won’t find this kind of defensive-stat intrigue on the waiver wire all that often. Over his last five games, he has averaged 9.4 ppg, 9.0 rpg, 2.2 spg, 1.4 bpg and 0.4 3s in 25 minutes a game. Jones Jr. and the Heat haven’t played all week leading up to Thursday, so I’m very eager to see what he does — and whether he can keep the run going. Bottom line: Thursday is either going to be an exciting or very disappointing night for those of us who recently added Airplane Mode, and I can’t wait to have my evening validated or ruined.

Kevin Huerter (14 percent): Huerter bounced back from a quiet game on Sunday (four points in 28 minutes) to put up 13 points with three triples on Tuesday, giving the rookie averages of 10.9 ppg, 3.2 rpg, 3.1 apg, 1.1 spg, 0.6 bpg and 2.3 3s (on 49.3 percent shooting) his last nine games. We’re getting close to last-call territory for Huerter in this column, and I imagine if he keeps going at the rate he’s been going, he’ll be owned in 25 percent of Yahoo leagues or more sooner rather than later.

Jeremy Lin (10 percent): We all know Lin was fantasy-relevant earlier in the season (14.3 ppg 4.0 apg, 1.2 spg and 1.7 3s during a 14-game stretch from late October to late November). This is just a reminder that he looked pretty good on Tuesday (16-3-4 in 24 minutes) and could be ready to go on another run. Plan accordingly.

Derrick White (9 percent): Try as I might, try as we may, I/we can’t quite write this guy off for good in fantasy leagues. White had just nine points and six dimes in his 34 minutes on Wednesday, but I remain at least partway fixated on his potential. In particular, the fact that he has averaged 4.0 apg, 1.3 spg and 0.7 bpg in his last six games. Granted, he has scored just 6.3 ppg with 0.3 treys during that stretch, so there’s work to do before he’s a reliable option. I do think he’s still a stash with some upside for the second half.

Trey Lyles (9 percent): Even with all the injuries in Denver, I’m not all that enthusiastic about Lyles, who has put up 9.4 ppg and 6.0 rpg in 25 minutes a game his last five games. The reason I can rationalize potentially adding him in a standard-sized league is that he has also averaged 0.8 spg, 0.8 bpg and 0.8 3s during that span. He has also been in a shooting slump (33.3 percent from the field / 17.4 percent on 3s), so there’s potential for him to do some damage once he heats back up.

Mike Muscala (5 percent): Over his last 10 games, Moose has posted 9.4 ppg, 5.7 rpg, 1.2 bpg and 1.9 3s in 25 minutes a game. There are certainly some leagues where those numbers can help you — and the league doesn’t necessarily have to be insanely deep for that to be the case.

Patrick Beverley (20 percent): I put him here because he’s coming off two straight useful games — 9-3-2 with two steals and two 3s, and a 10-point, 11-assist double-double on Monday. However, he attempted just six shots total in those two games, and I can't make an aggressive recommendation here whatsoever.

Robert Williams (11 percent): With Al Horford out, Williams could hypothetically be playing himself into more consistent playing time even after Horford is back, and it certainly didn’t hurt that Kyrie Irving recently talked up how much he likes playing with the wildly athletic rookie big man. Williams has averaged 3.2 bpg in his last five games, and for that reason alone he warrants our attention. And I really do mean that reason alone, since he’s only putting up 5.0 ppg and 6.2 rpg during the same stretch. Basically, he is Boston’s answer to Mitchell Robinson at the moment.

Matthew Dellavedova (10 percent): Dellavedova missed Wednesday’s game with a knee issue. Assuming it’s not too serious, it’s worth noting that the backup PG has five straight double-digit scoring games, with averages of 11.8 ppg, 4.6 apg, 0.6 spg and 2.2 3s in 20 minutes a game during that run. That doesn't seem at all sustainable in such limited playing time, but Dellavedova could still help deeper league owners who are desperate for PG stats.

Last but not least, here's a peek at a few more of the terrific resources awaiting Season Pass subscribers. 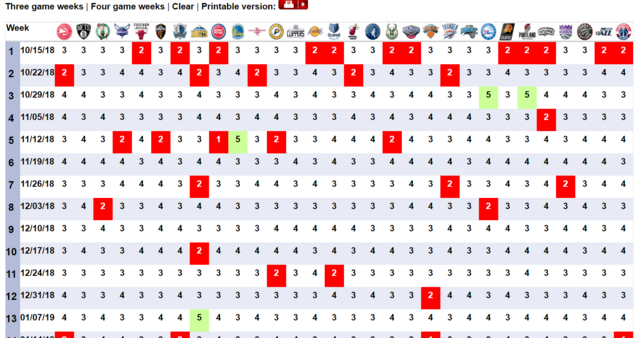 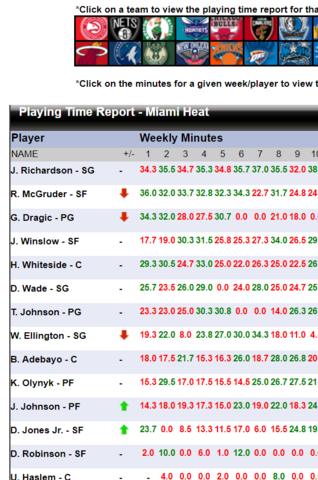 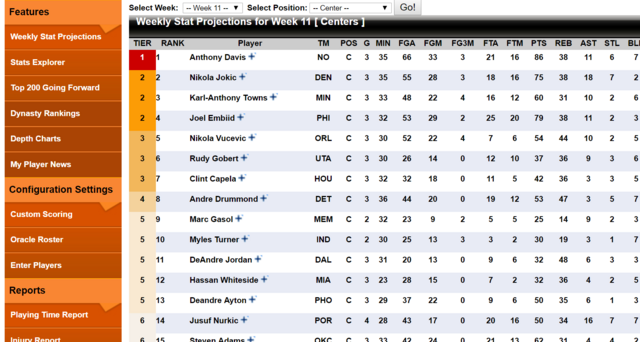 We’re also proud to provide the DFS Toolkit with everything you need to crush in any daily NBA leagues. Regardless of which site your using, which slate you’re playing or which game style you prefer, we have you covered. Head here to learn more about the DFS Toolkit!

For unfettered access, just head over and subscribe to the Pass! You'll get customized player reports, exclusive daily and weekly columns, everything discussed above, and much more...I just couldn't squeeze it all into one summary.