With the changing of the calendar, it's a perfect time to consider fantasy players' success, or lack thereof, in 2018. Every team has played at least 35 games and we're in the middle of Week 12, which means we're more than halfway through the fantasy hoops regular season in head-to-head playoff formats -- or 42.7% complete in roto leagues.

I'm listing the top 200 players this week (based on 8-cat values) to include more deep-league options and to highlight those who have fallen lower than expected on draft day. We’re talking guys like Gordon Hayward, Dennis Smith Jr., Goran Dragic and Jonathan Isaac, among many others.

Before getting to the lists, which include separate values for 8-cat, 9-cat and Points leagues, let's look at some broader takeaways through Jan. 2, beginning with total games played.

The Raptors have four fewer games remaining than three other teams, which isn't great news if you own guys like Kawhi Leonard, Pascal Siakam and Serge Ibaka. How impactful the differences will be depends largely on your format. In roto leagues with limits per position, getting four extra games from Andre Drummond may not matter much if you're up against an 82-game cap. It also hinges on the timing of playoffs in head-to-head leagues. If your fantasy playoffs are scheduled for Weeks 22-25, the Kings are the best team to own with four consecutive four-game weeks in that span. Stock up on your Buddy Hield and De'Aaron Fox ownership! For more insights about the schedule, check out the Season Pass schedule grid and schedule breakdown...it's an invaluable annual feature.

I'd also like to highlight position disparities for these top-200 players.

I used ESPN eligibility and for guys with dual-eligibility, I chose the position at which they've played most of their minutes (per Basketball-Reference). The most obvious takeaway for me was how thin PFs have been this season, a situation that would look even more dire if Giannis Antetokounmpo and LeBron James weren't hitting elite value with PF eligibility. There are fewer PFs in the top 200 than any other category and their overall value lags behind with the exception of the middle rounds (players 15-25). There are also far more point guards in the top-200 than I would have anticipated, since both PG and C tend to be the scarcest positions for fantasy. It will be interesting to see if this trend holds through the second half of the season -- if so, we'll have to analyze just why and how PGs became more readily available as fantasy assets. 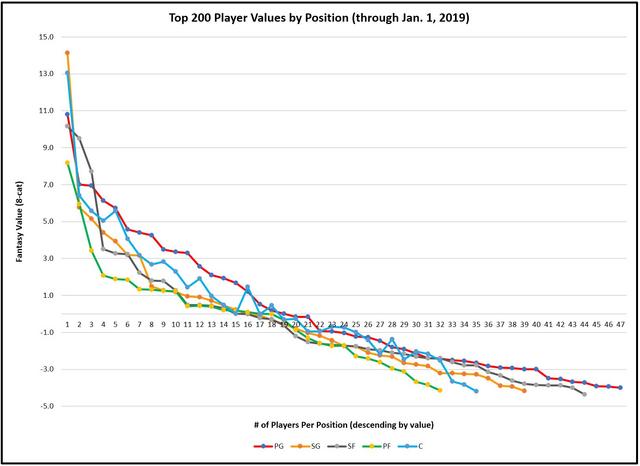 Players who did not make the top-200 cut include Collin Sexton, Kentavious Caldwell-Pope, Mike Muscala, Mo Bamba, Stanley Johnson, Allen Crabbe, Rondae Hollis-Jefferson, Josh Jackson, Kevin Knox, Avery Bradley, and of course Boban. The only real surprise for me in that list is RHJ, who was actually building some momentum prior to his groin injury on Saturday. It's also a reminder that rookies are a fickle lot -- even when they get reliable playing time, they're often ruined by inefficiency. Here are this season's exceptions:

Yep, those are the only rookies with top-100 value in any of these formats. Wendell Carter Jr. just misses the mark (107/116/107), and guys like Shai Gilgeous-Alexander (146/156/161) and Mikal Bridges (161/134/184) have only been sporadically useful. This isn't to say more rookies won't be useful as the season progresses -- high draft picks tend to play for bad teams, and they're often unleashed late in the year. It's just the latest reminder that rookies are typically hard to trust for fantasy purposes. Of course, there are always expectations like Ayton or Doncic.

Last but obviously not least, here are the top-200 ranks! (Technically it's the top-197 because I initially failed to eliminate some fluky players who appeared in only a handful of games.)

Use these values as a guideline for expectations, with the understanding that it reflects the entirety of what's happened from mid-October through early January. If you have any questions or insights, you can always find me on Twitter @Knaus_RW. I'm also happy to consider new and interesting topics for future columns, so send me a Direct Message, Tweet or email if you have a question you'd like to see answered. Good luck this week!