This week's column analyzes the dispersion of statistics across the top-200 fantasy players, to determine which categories are scarce or abundant. We’ll see that blocks are easily the most ‘boom or bust’ category, for instance, and that helpful players for FT% are easier to find than FG%.

We’ll begin with a snapshot of the entire top-200. The typical cut-offs apply. To qualify, players must have appeared in at least six games while averaging a minimum of 15 minutes per game. The list of players who didn't make the cut (for one reason or both) includes Kevin Love, Nerlens Noel, Bobby Portis, Kris Dunn, John Collins, Will Barton, Boban Marjanovic, David Nwaba, Willy Hernangomez, and yes...Aaron Holiday.

This left 284 qualifying players. Most fantasy leagues have 10-14 teams and 12-15 players per roster, so I trimmed that down to the top-200 players (using 8-cat values, for reasons I've explained in previous columns). Here we bid adieu to guys like James Ennis, Terry Rozier, Trey Lyles, OG Anunoby, Markelle Fultz and Rondae Hollis-Jefferson.

Editor’s Note: If you love Fantasy Basketball, you have to be playing on DRAFT. It's daily fantasy basketball snake drafts instead of salary caps. They take minutes to complete, and there's even auction drafts! No more setting lineups or constantly worrying about pros, just draft and win! Right now DRAFT is giving Rotoworld readers an exclusive FREE entry into a real money draft when you make your first deposit! Here's the link!

The chart below has 1,600 unique data points, and the jumbled appearance is almost the point – only a few categories really stand out (block, assist, rebound, steal and 3-point specialists in the positive, FT% anchors in the negative). This is just a starting point for today’s analysis, which draws clear lines through the chaos. 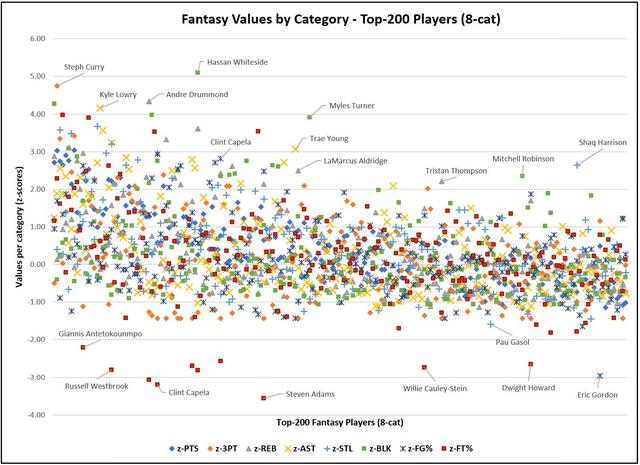 The single-biggest hit to owners' free-throw percentages this season? It isn't Andre Drummond (he's third-worst) and it's certainly not DeAndre Jordan, who isn't even the worst 'DeAndre' in this category -- that would be DeAndre Bembry with 62% shooting on 2.3 attempts per game. He isn't second-worst either, since Deandre Ayton is making 75% of his 2.5 attempts. Jordan, meanwhile, is actually No. 54 overall in FT% with 82% accuracy on high-volume attempts (3.8 per game). I'll give due credit to Jusuf Nurkic here, too. In past years he was a borderline punt-FT% center, but through 16 games he's dropping 80% of his 4.7 attempts, putting him in the same range as guys like Kyle Lowry, Buddy Hield, and even Jimmy Butler (so far, at least). Heady times if you own DJ or Nurk in category-based leagues.

Looking at this data with a specific view toward scarcity, we can determine how many of the top-200 players are above the mean in each category -- if a handful of shot-blocking maestros are raising the overall average for that category, we'd expect to find (and indeed, so find) fewer players above the mean in blocks. This is what results:

From this, we can already see that rebounds, assists, blocks and weighted FG% are the 'scarcest categories -- 40% or fewer of the top-200 players will help fantasy owners in these categories, relative to their peers. In a vacuum, it makes sense to acquire a boards-and-blocks specialist, in exchange for a scoring-and-threes specialist – the former is simply scarcer than the latter. The next step is to determine just how far above the mean these players are. To do so, we'll turn to standard deviations (SDs). Since they're fundamental to what follows, it helps to know that standard deviation is "a measure used to quantify the amount of variation or dispersion of a set of data values."

As a practical example, let's use rebounds. The top-200 mean for assists is 3.00 and the standard deviation is 1.98. This means that Kyle Lowry, averaging a league-high 10.35 assists per game, is 3.71 SDs above the population mean. Hassan Whiteside, at just 0.6 boards per game, falls 1.21 SDs below the mean. Those values are called 'z-scores' and they're the basis of almost all aggregate fantasy values, including my own -- they allow us to compare dissimilar statistics with one unifying metric.

This table shows just how far above the mean players are in each category, based on their z-scores:

We knew from the first table that blocks and rebounds had the fewest above-the-mean players, while FT%, 3-pointers, points and steals were somewhat easier to find. What this shows is that as you move toward truly elite production, 3-pointers drop off quickly. Only five players are at least two SDs above the mean -- Stephen Curry, Kemba Walker, James Harden, Paul George and Tim Hardaway Jr. As usual, Steph is in a world of his own with 5.17 triples per game, which puts him a ridiculous 4.21 SDs above the mean -- that's the second-largest impact in any category this season. The top spot for category impact belongs to Hassan Whiteside, whose 3.13 blocks put him a massive 4.43 SDs above the mean. In a 'normal distribution' we'd expect 99.7% of all values to fall within 3.0 SDs, which makes Steph and Hassan extreme outliers.

Scoring and weighted FG% prove to have no 'unicorn' type producers above 3.0 SDs, and percentages in general don't offer many extremely helpful players. There are plenty of big men who shoot 55% or above, but they don't have the volume necessary to really carry fantasy teams. Damian Jones leads the NBA with 73% shooting, for instance, but takes a mere 3.06 shots per game. DeAndre Jordan's 62% shooting is fantastic, but even he is averaging only 6.6 shots. To rise multiple SDs above the fray, players need to combine both excellent efficiency with volume -- the only guys doing so are Rudy Gobert, Clint Capela, Domantas Sabonis, Deandre Ayton, Steven Adams, Montrezl Harrell and Giannis Antetokounmpo.

Another way to think about values on a category-by-category basis is to compare standard deviations directly to means. This provides an interesting, objective measure of scarcity:

The SD for blocks is 88.1% of the mean itself, indicating a very high standard deviation. That means that the data points (players) are widely spread out -- I'll call this a 'boom-or-bust' category, in which players tend to either be well above the mean, or well below the mean. They either block shots, or they don't. Three-pointers and assists would also qualify as boom-or-bust categories, though not to the same extent as blocks. To help visualize this, here's a chart showing the distribution of blocks this season -- if this were a 'normal' distribution it would look like a typical bell curve. 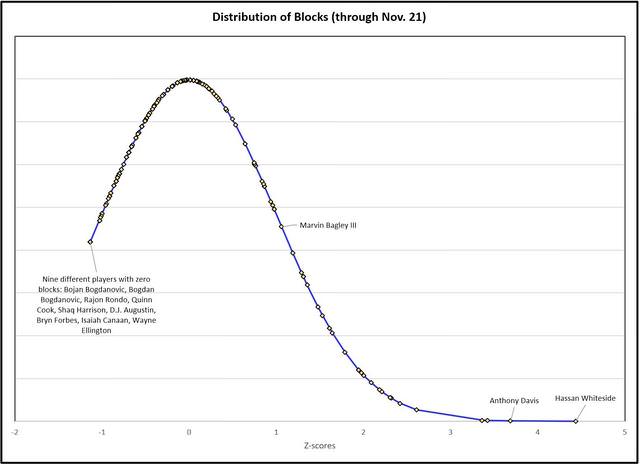 Elsewhere, we find that both percentage categories (FG% and FT%) have low ratios which suggests that most players are reasonably close to the population mean. There are obvious exceptions, with terrible FT shooters such as the aforementioned Steven Adams and Rudy Gobert. Rebounds and steals have moderate ratios, suggesting that most players chip in at least something in these categories, unlike the more specialized 3-pointers, assists and especially blocks.

I'll end with a fun exercise. The top-200 players are averaging a combined 2,789 points per game. They are also averaging a combined 271 triples, 1,076 rebounds, 599 assists, etc. Based on those numbers, I've made this table showing (in theory!) how much each statistic is 'worth' compared to other stats:

Due to the sheer scarcity of blocks, each blocked shot is 'worth' 21.84 points (again, this is a just-for-fun exercise). Therefore, Karl-Anthony Towns' 1.94 blocks per game equate to 42.4 points per game. Whiteside's 3.13 blocks equal 68.4 points. If you inverted the entire top-200 list in this manner, their overall values would not change -- only the numbers would. You can say that Robert Covington's 2.56 threes per game are equivalent to 10.2 rebounds, or that Joel Embiid's 27.95 points per game are equivalent to 1.96 steals. The list goes on. Send me a message on Twitter @Knaus_RW with any comments or questions, and have a happy Thanksgiving!