Now that gambling is legal, I believe player prop betting will become the new wave in the sports prospecting market. If you aren’t familiar, player prop betting includes odds to win season-long awards, daily over/under individual stats and daily questions like “Will player X score a touchdown this week?” Since millions of people play fantasy football and look at player projections on a weekly basis, the idea of betting on single player’s performance is not foreign. Therefore, I think fantasy sports players will love the concept of player prop betting.

If you are trying to maximize your returns on sports prospecting, there are reasons to bet player props instead of games (over/under, moneyline, and point spread). I will also be discussing these advantages on Twitter (@HaydenWinks) if you are interested.

Over the next month, I will be finding values for various season-long player prop bets including MVP, Rookie of the Year, the offensive yardage leaders and the first coach to be fired. In each column, I will provide some research, the current odds and then my top three value bets. Today, I am evaluating the odds for MVP. Let’s dig in.

Editor's Note: Be sure to checkout DRAFT's $1,000,000 Best Ball Championship. Best Ball is season long but with no management. Just set it and forget it! Once you're done drafting, that’s it – no or waivers– you don’t even have to set your lineup. Your best players get automatically selected and you'll get the best score, every week. For a limited time, DRAFT is giving Rotoworld readers a FREE entry into a real money best ball draft with your first deposit! Here's the link

The MVP is a quarterback’s award unless a running back is close to breaking records. With the NFL transitioning to more spread and running back committees becoming the norm, it is harder for a running back to rush for 2,000 yards in today’s NFL.

Last season, Todd Gurley had an incredible year but was still out-voted by Tom Brady 40 to 8. With access to MVP votes, we can conclude that Brady’s quarterback performance is valued more than Gurley’s running back performance:

Using the five statistics from above, there have been seven seasons by quarterbacks with at least the numbers Tom Brady produced last year. However, no running back in NFL history has matched what Todd Gurley did last year! Yet, Brady won the MVP in a landslide. It is going to be much tougher for a running back to match what Gurley did last season than what Brady did, and nevertheless, the best quarterback would still likely win MVP.

The MVP is definitely a team award to some degree. Eight of the last 11 MVPs have been awarded to the quarterback with the most wins. That has equated to 13.4 wins on average since 2007. There are only five to 10 teams that have a legitimate chance to have the best regular season record or win 13 games, and we have to focus on those teams. 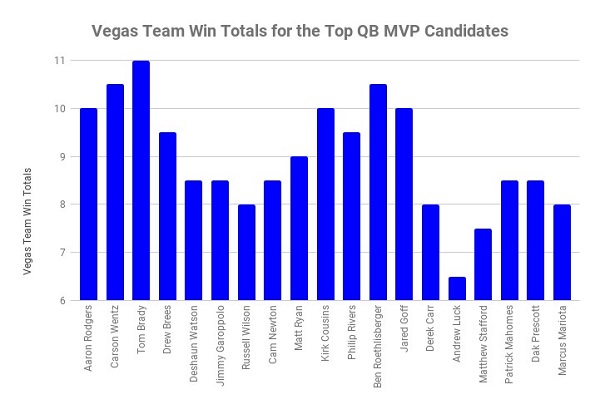 There is value to be found in the mid-tiered MVP candidates. Matt Ryan, Kirk Cousins, Philip Rivers, Ben Roethlisberger and Jared Goff all play on teams projected by Vegas to win nine or more games. However, they have longer odds at MVP than Deshaun Watson, Jimmy Garoppolo, Russell Wilson and Cam Newton who play on teams projected to win 8.5 games or fewer. 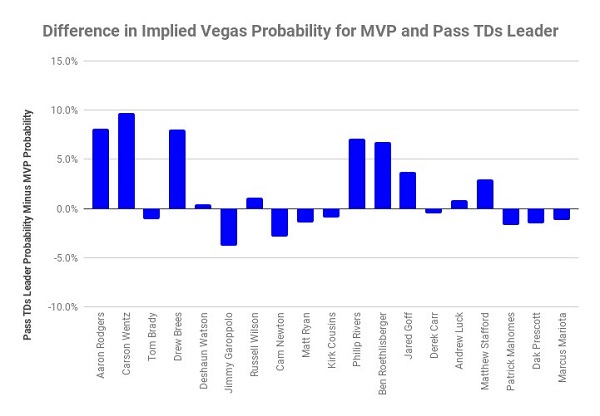 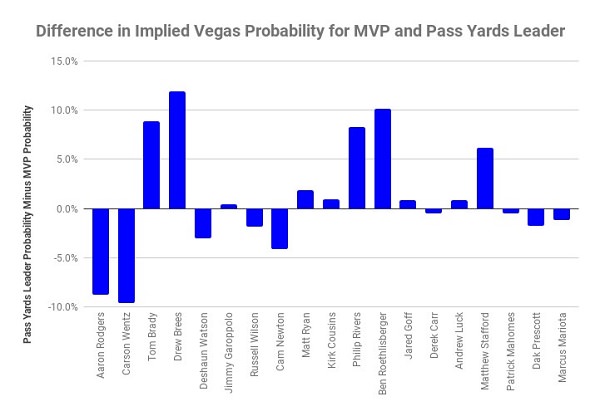 While not as important as Vegas win totals or passing touchdown leader odds, passing yards leader odds are still a valuable tool. Tom Brady, Drew Brees, Philip Rivers and Ben Roethlisberger have much better odds to lead the league in passing than winning MVP.

For me to consider a player a legit MVP candidate, the player had to meet the following criteria:

To be abundantly clear, this is not ranking of the most likely winners. Instead, these are three players with a higher probability of winning than the Vegas odds are implying.

1) Drew Brees at +1500 or 6.3% implied probability - With his track record and the Saints roster, it makes sense that Brees is listed with the fourth-best odds to win MVP. Brees has thrown for at least 4,800 yards in six of the last seven seasons. More importantly, the Saints are a major threat for double-digit wins, which has been a requirement for MVP winners. Vegas currently has the Saints’ win total at 9.5 wins after they won 11 games last season.

As Evan Silva points out in his Saints preview, Brees is a candidate for positive touchdown regression. Brees’ TD rate dropped from 5.8% over the last eight seasons to 4.3% last season. But this statistic is not representative of the quality of his play last year. Brees led the league in passing yards per attempt and finished second in PFF’s Accuracy Rating on 20-plus-yard throws among 34 qualifiers.

An underrated positive for Brees’ MVP candidacy is the Mark Ingram suspension. Ingram scored 12 rushing touchdowns last season, which helps explain Brees’ TD rate decreasing to 4.3%. With Ingram out, the Saints are now more likely to pass near the goal line. It also means there are more opportunities for Alvin Kamara to have the ball in his hand. Luckily for Brees, Kamara is great as a receiver which will boost Brees’ passing stats unlike when Ingram runs the ball. If Brees maintains last year’s accuracy and his pass attempts and TD rate returns to his recent average with Ingram out early in the season, Brees will be front and center in the MVP race.

2) Aaron Rodgers at +550 or 15.4% implied probability - Vegas currently projects the Packers to win 10 games this season, which is tied for fourth in the NFL. Helping the Packers’ cause is their eighth-softest schedule and new defense with DC Mike Pettine. The Packers are one of a handful of teams that have a chance to finish with the best record in the NFL.

Rodgers also has the best odds to lead the NFL in passing touchdowns according to current Vegas odds. Remember that the passing touchdown leader has been the MVP nine of the last 11 seasons. It makes sense that Rodgers is the favorite for passing touchdowns given the current running back situation in Green Bay and Jimmy Graham’s addition to the offense.

Aaron Jones, the Packers’ most explosive running back last season, is suspended for the first two games. That leaves Jamaal Williams with the best chance to win the running back job. Williams finished 14th among 47 running backs in Football Outsiders’ Success Rate, but he was never a highly rated prospect and didn’t show much speed or burst last season.

On top of that, the Packers added red zone specialist Jimmy Graham. In the Tight End Worksheet, Rich Hribar noted that, “Graham is coming off a 10-touchdown campaign in 2017 with seven of those touchdowns coming from 4-yards or closer.” It is likely that Graham will be one of the first options within the five-yard line with the Packers lacking a stud running back option. This raises Rodgers’ already sky-high touchdown upside. For this reason, I like Rodgers’ odds of leading the NFL in touchdowns and ultimately winning the MVP because of it.

3) Jared Goff at +3300 or 2.9% implied probability - Goff had a breakout season, but he was somewhat overshadowed by Todd Gurley’s 2017 performance. Sean McVay’s brilliance led Goff to a 5.9 TD rate and an NFL-leading 12.9 yards per completion last season, yet nobody is taking Goff seriously as an MVP candidate despite his playing on one of the best teams in the NFL.

The Rams head into this season with even more talent than last year on both sides of the ball, and they already won 11 games last season. Vegas projects the Rams to win 10 games this season, which puts them in the running to have the most wins in the NFL. As highlighted earlier, the MVP winner has been the quarterback of the team with the most wins eight of the last 11 seasons. Only Tom Brady, Carson Wentz and Ben Roethlisberger are projected to have more quarterback wins according to Vegas.

Nine of the last 10 MVPs have finished top three in passing touchdowns, and at 23 years old and in his first season with a new coaching staff, Goff finished fifth in passing touchdowns. To sneak into the top three, Goff will have to battle against regression. Last year’s 5.9 TD rate will be tough to match, but if I had to pick an NFL head coach to do that, it would be Sean McVay. According to current Vegas odds, Goff is projected to score the eighth-most passing touchdowns this season, but two of the quarterbacks ahead of him are coming off ACL injuries and four are at least 36 years old. Goff also has a higher probability to lead the league in passing touchdowns than winning MVP, which tells me his MVP odds are a little off.

Goff was very efficient, but he did not have enough volume to be a serious MVP candidate last season. The Rams were 24th in pass attempts last season because of Todd Gurley’s usage and by their having starting the most drives starting on the opponent’s side of the field. The great starting field possession elevated Goff’s TD rate, but it also kept Goff from accumulating more passing yards. While the defense is still amazing, it is unlikely the Rams offense will start inside the opponent’s 50-yard line as often as last year. For this reason and his general progression as a young quarterback, I like Goff’s chances for increasing his passing yardage this season.