With so much money being exchanged, these weekly lines are really, really tough to beat. I can confidently say at least 95% of football fans would win between 45% to 55% of these game bets (sides or over/unders) over time. It’s just the reality of such an efficient market. With that said, I think there are some ways to barely increase our chances of churning a marginal profit. As you guys know, Rotoworld is the king of grinding news. That’s something the public doesn’t do as well as a Rotoworld blurber, so it’s going to be one of the common things I utilize in this column, in addition to advanced stats and film.

The Seahawks are really banged up on defense right now. DE Jadeveon Clowney (core) and S Quandre Diggs (ankle) are doubtful, while CB Shaquill Griffin (hamstring) and LB Mychal Kendricks (hamstring) are questionable after missing practice this week. Even LB Bobby Wagner (ankle)  and DT Al Woods (ankle) didn’t practice on Thursday. It’s enough pieces to downgrade an already below-average defense. If Kyler Murray has time to operate and has lanes to run, I like the Cardinals’ chances on offense. And we already know Russell Wilson is going to carve up Arizona when he’s on the field.

The Ravens are clearly way more talented on both sides of the ball, but my question is: Are the Browns emotionally/mentally ready for this game? It seems like there’s chaos on all three levels of the organization -- front office, coaching, and players -- and Baltimore’s power football makes it likely that they roll over. Give me the Ravens and all the points. 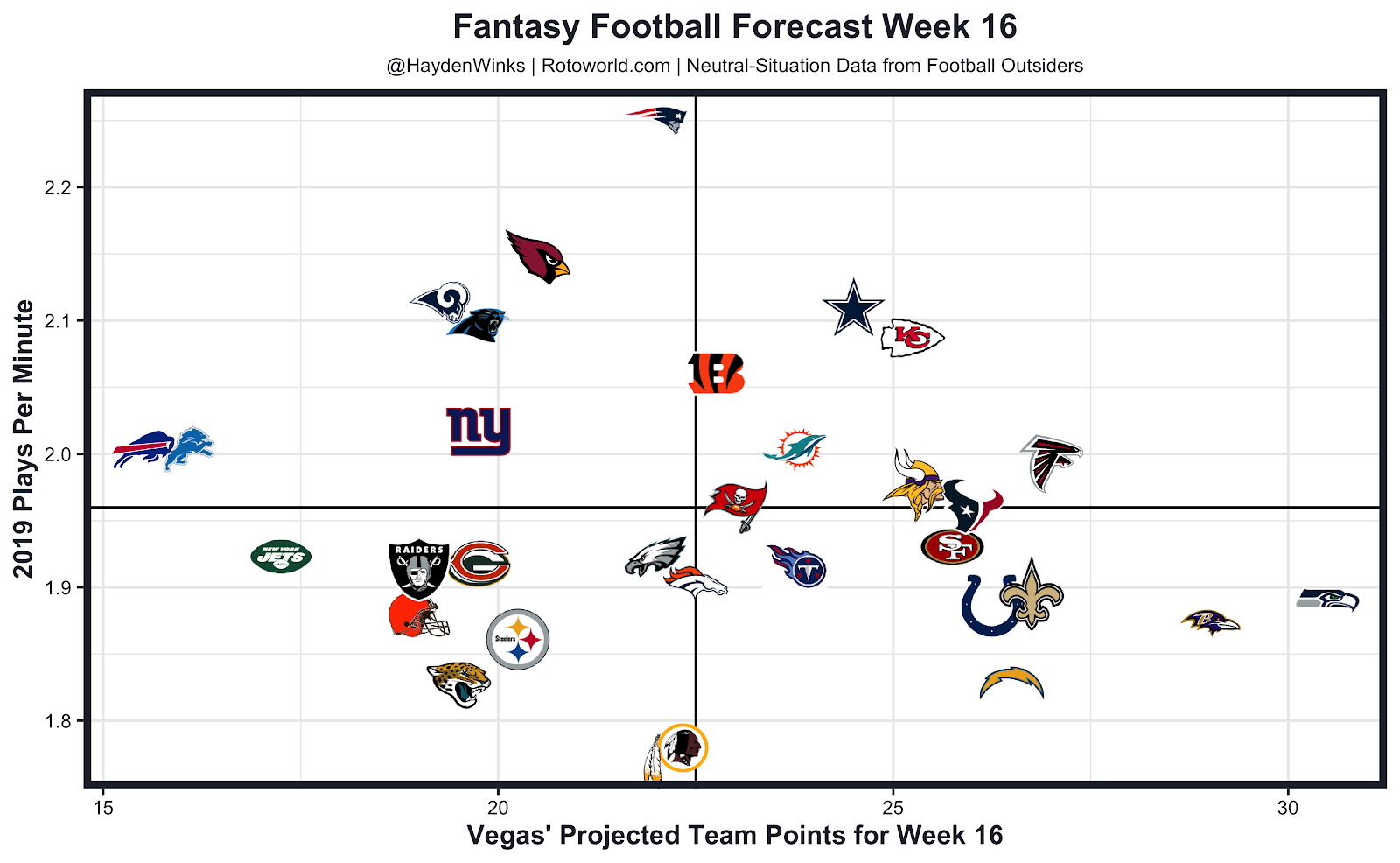 It’s rare to have both offenses from the same game to be above-average in projected points and offensive pace, but that’s what we have here. There should be a lot of plays called, and we’ve seen very little defense from both clubs. Cincy is in the bottom 20th percentile in both run and pass DVOA defense, while Miami is in the bottom 10th percentile in both categories. Even if the Bengals opt to run the ball a ton, I’m confident in Joe Mixon picking up efficient yards to keep the offense on track for points. DeVante Parker, Tyler Boyd, Mike Gesicki, and even John Ross could all have nice games here... Just make sure to keep an eye on the weather.

Both of these offenses have been very inconsistent (borderline bad at times because of these below-average quarterbacks), but the real reason I like the under is the projected pace of the game. The Chargers are the third slowest offense, while the Raiders are a hair under league average. It’s going to be a fast game, and I’m not expecting passing-game fireworks given how they’ve looked. This is also a bet on Chargers S Derwin James making a real impact. Two of the Bolts’ three best PFF team pass coverage grades have come since James’ return.

This falls into the “second in-division game of the season” category, which has historically been more of a slugfest than a high-scoring affair. I’m also willing to be underweight on Aaron Rodgers than most everyone else -- these predictive advanced metrics have Rodgers as an average, not elite quarterback -- especially when he has very limited weapons. I’m expecting Aaron Jones to see upwards of 15 carries after shredding Minnesota for 23-116-1 earlier in the year, a game that ended with just 37 points.

If you’re looking for more team breakdowns, read my Week 16 Fantasy Football Forecast column. It’s nearly 10,000 words and has a bunch of graphs that could be utilized in the betting markets.