Today's column explores average draft positions (ADPs), providing insight into broad trends and perspectives on player values. If the hive-mind of fantasy GMs have given Josh Richardson an ADP of 65.2 (they have), you're less likely to need to reach for him in the 40-50 range.

Before diving into ADPs themselves, I want to take a look at position eligibility. By using Yahoo's top-200 players (by ADP), I determined how many players were eligible for each position. As to be expected, PGs and Cs were the rarest position while PFs and SGs were most common. 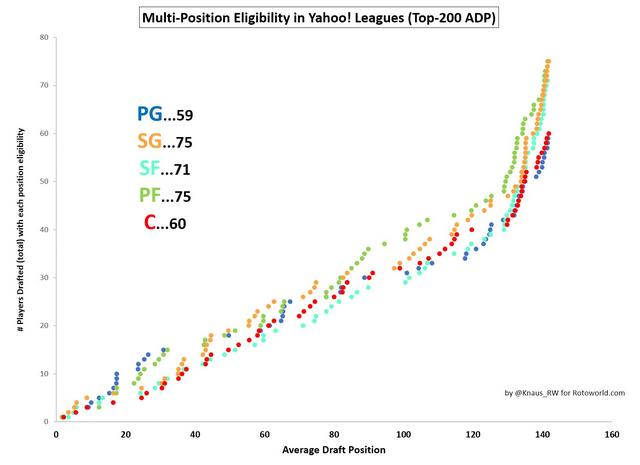 This is a simple tool to help visualize where you'll find certain positions in the course of a draft. Each dot in the chart above represents a player being picked at a given ADP. The 'lines' that rise the fastest mean more players from that position are being drafted. Center-eligible players start slow but gain steam in the middle rounds. SF-eligible players lag behind every position throughout most of drafts, before surging in the late-ADP range (130-140). You can also see, for instance, that PGs are popular early but almost completely vanish in the 30-60 range -- with only 59 eligible players in this pool to begin with, you'll want one of those early/elite PGs. Meanwhile, PFs have a major lull from around 90-120. There are plenty of interesting nuances to glean from this data, but let's press forward with the analysis.

For the most up-to-date ADP data (it doesn’t change too dramatically), here are the links for ESPN leagues and Yahoo leagues. Fair warning…the ESPN numbers for ‘Avg Pick’ look wacky this year. There are sudden leaps in ADP between guys like Goran Dragic (75.7) and the next-closest player Luka Doncic (83.6) that only get exaggerated as you go deeper. It shows Jamal Murray with an ADP of 140.9, Myles Turner at 173.5, Buddy Hield at 568.6…you get the picture. For that reason, I’m only using Yahoo ADP data this year.

Be mindful, however, that ADP data is only good as a general roadmap to values. Here are some caveats to keep in mind:

1)     ADPs are an amalgam of many different types and depths of leagues. When it comes to ADP data, the sites that host leagues don’t differentiate between a 10-team roto league and a 14-team H2H league.

2)     There are wide disparities in the intensity of leagues – some require painstaking research and strategies to snipe valuable players from knowledgeable opponents, while some are casual affairs where a little bit of planning goes a long way.

3)     The ‘official’ pre-draft rankings can have a distorting effect. ADP data includes plenty of auto-draft selections (although only ‘live draft’ data is included, lots of owners still forget to show up), which gives outsized importance to pre-draft ranks.

Nevertheless, ADP is a useful tool for getting the temperature of the room, as it were. If you know that Kyle Anderson has ADP of 89.9 in ESPN drafts, you’ll be more likely to steal him in the late-middle rounds. This also protects against over-reaching for guys you love – there’s nothing wrong with snagging Luka Doncic a round early to ensure he’s on your squad, but why reach for him in Rnd. 4 in Yahoo (his ADP = 82.1) when you can almost definitely get him a round or two later?

With that said…here are the top 200 players for Yahoo leagues!

Take note of the ‘ownership percentage’ in the right-hand column. This helps differentiate players with otherwise strikingly similar ADPs – Caris LeVert and Frank Kaminsky are both at 141? Not really, because Frank may have been drafted as a flier by some misguided owners but that only represents 3% of total drafts. Meanwhile, LeVert has emerged as a late-round staple in 81% of all drafts – he’s a way more popular sleeper target, despite the comparable ADPs.

Here are 10 more players with consistently late-round ADPs, along with my quick takes on them:

Danilo Gallinari (135.1): The Clippers have empowered Gallo and Tobias Harris to lead the offense, and outside of the top-100 I’m fine with taking the injury risk for Gallinari. With an ADP of 135.1 he’s routinely available in Rds. 10-12.

T.J. Warren (134.6): I wasn’t scared off by Josh Jackson last season and it paid dividends, with Warren hitting top-100 value for the second straight year. I want nothing to do with him this year, though.

Derrick Favors (134.8): There’s nothing flashy about owning Favors. Injuries severely reduced his fantasy appeal to the point that he was undrafted in many leagues last year, but he finished as a top-75 value (cumulative) thanks to a mere five missed games. Utah paid him this summer and he’s still the starting PF, so he should cruise along as a top-100 guy.

Avery Bradley (135.0): AB was putting up mid-round value in his final years with Boston, but he’s just a flier pick after a disastrous, injury-plagued 2017-18 campaign. It remains to be seen if his core-muscle injury is truly behind him, but the upside is there for a final-round flier.

Bojan Bogdanovic (137.5): We can start with the fact that Bojan has missed only 10 games across four NBA seasons. That type of durability shouldn’t go overlooked, and at worst he’s a 3-point specialist who will help your FT% and chip in a few stats elsewhere. Not a guy to heavily target, of course, but worth a look.

Ryan Anderson (138.9): Another Suns player I’ll be avoiding everywhere. He can still put up tons of 3-pointers with some rebounds, but that’s about it. Throw in the inevitable DNPs and probable shutdown, and he belongs on the wire.

Jeremy Lin (140.4): No thanks. He can’t stay healthy and will be on the wrong end of the PG timeshare with Trae Young.

Jordan Clarkson (140.6): I’m intrigued by Clarkson, in part because he’s another player who simply hasn’t missed games – four DNPs in the past three years. I’m anticipating high usage as a sixth-man for the talent-deprived Cavaliers, which gives him a shot to average 15 points, 1.5 triples, 3.0 boards and 3.0 dimes. He’s a mild help for FT% and a mild negative for FG%, but isn’t a guy (Marcus Smart comes to mind) who will tank your FG%.

Derrick White (unknown): The Spurs’ possible starting PG is rocketing up draft boards due to Dejounte Murray’s awful ACL tear. He’s not in this ADP list just yet, but it won’t be long before he cracks the top-150 and climbs even higher – I’m comfortable gambling on him around 110, and he’s looked very assured throughout Summer League, training camp and the preseason.

As I detailed in the introduction, ADP values are flawed metrics of player values, but they still provide valuable insights in overall fantasy trends and perceptions. For more ways to use aggregated pre-draft data to your advantage, check out our Draft Guide columns on ESPN and Yahoo's Default Ranks. Good luck!