We’re getting close to the NBA trade deadline. It’s an interesting year because the sellers have already unloaded their pieces. The Celtics really only have Brandon Bass as an impact player who could be dealt. He’s been terrific and is getting a lot of minutes, so he would open up some playing time for Tyler Zeller and Jared Sullinger. Tayshaun Prince may also be traded, but there shouldn’t be many implications from that move. Maybe we get a little more out of Marcus Thornton and Jae Crowder.

The two teams with the most ammo set to trade are the Nuggets and Nets. The Nuggets are going to be “very, very aggressive” with trading guys. That means we’re likely looking at Wilson Chandler, Arron Afflalo, J.J. Hickson, JaVale McGee, Darrell Arthur and Randy Foye could be dealt. All of those guys would lose value, so they are all considered as sell-high players. Conversely, the young guys like Jusuf Nurkic, Gary Harris, Alonzo Gee and Erick Green could get more run. Nurkic should be owned everywhere, but besides that owners in deep leagues can keep an eye on Gary Harris until the trade talk heats up.

The Nets are almost certainly going to deal Brook Lopez. They’re playing him big minutes and they’re probably just waiting for a team to have an injury or some chemistry issues. Mason Plumlee has really slowed down, but he’ll heat up soon. Also, keep an eye on Cory Jefferson. Jarrett Jack could also be traded, but he’s been too good to worry about right now. Unless you can get top-60 value, I’d just stick with him and hope the Nets deal Deron Williams instead.

Reggie Jackson could also be traded, but I don’t think it’s going to happen. Backing up Russell Westbrook is the most important thing and they would be in a really bad spot without a point guard. I’d leave him on the wire for a couple weeks. If anything picks up, pick him up.

The Raptors could also make some moves, but I don’t see it. It looks like it’s just an issue with the rotation and health.

OK, so not everything is related to trade rumors. Here are some guys who are showing some misleading value. The number in parenthesis is that player’s per-game value in the past two weeks. I added a few holds, too.

Chris Bosh (167) - His usage rate jumps up without Dwyane Wade, but the emergence of Hassan Whiteside has overshadowed Bosh. Whiteside isn’t really a great pick-and-roll player just yet and the Heat guards aren’t great there either. In other words, Whiteside’s offense is going to come off the glass. Bosh should be able to climb into the top 30 in the next few weeks and you can probably get him for cheap.

Kevin Durant (66) - He’s been the No. 1 player for five years running, but it’s not going to happen this year. As far as total value goes, he’s only 82 on the season. Plus, his numbers have really fallen off on averages. Compared to last season, his points are down 6.9, his boards are down 0.7, steals down 0.4 and treys down 0.3. His minutes are also down 5.2 per game. The good news is that this toe injury he’s dealing with now is not the same foot as his foot break. You can probably pick him up for like a top-15 guy. His schedule is solid late, too.

Mike Conley (178) - A quick DFS note, his price has dropped big time and it makes sense to use him now.  He hasn’t been dropping dimes at all since his return, handing out 2.0 assists to go with 16.7 points, 2.0 boards, 0.7 steals and 2.0 treys. His assists did drop in January and another big minus is his lack of steals. Conley is shooting the ball well this year and he should heat up soon. His wrist injury seems to be behind him.

Goran Dragic (197) - He’s not going to match his ADP value, but he’s really struggling right now.  A big reason for his dip in output is his sub-par foul shooting. Dragic made at least 80 percent from the line in November and December, but he was at just 61.8 percent in January. Plus, his treys, steals and assists also dropped while his minutes only dipped 2.3 per game — one 18-minute game due to a technical really dropped his average too. The Suns are playing more three-guard lineups, so Dragic should be able to keep his playing time around 35 minutes.

Markieff Morris (143) - His minutes didn’t drop, but missing 3-pointers has cost him some fantasy value. Morris was at practice this week working on his treys, so that means the Suns haven’t abandoned him as a floor spacer. Plus, Alex Len struggling on offense should help his usage rate and ceiling (I like Len, by the way). He’s actually struggled inside of the paint recently. Here’s a look at his shot chart in his last seven compared to the rest of the season: 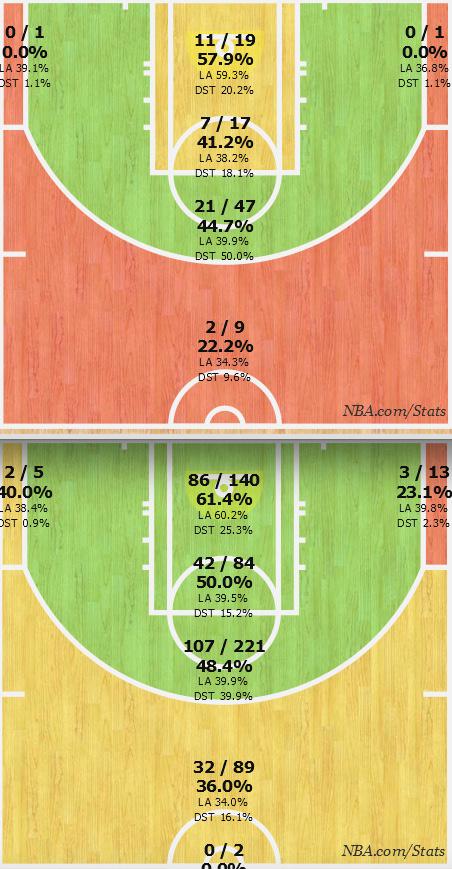 As you can see, the treys and inside the paint stuff needs help. Morris has been great in the paint before this cold spell, so he’s going to get hot soon. I’d consider him a top-50 player.

Tony Parker (217) - The Spurs are still sitting at No. 7 in the standings and they’re probably going to be less likely to rest guys. Heck, Tim Duncan hasn’t been popped since December. You can probably get Parker for a song right now.

Terrence Jones (219) - He’s not unleashed just yet, but he’s been outstanding on defense. Check out these defensive numbers:

Wow. Coach Kevin McHale is going to give him minutes in the mid-20s soon. I’d add him everywhere until Dwight is back. If you missed him, try to get him as a throw-in player.

Nicolas Batum (161) - His fantasy owners probably hates him. See how much.

Carmelo Anthony (26) - We all know the drill here. He’s going to be shut down eventually. If you’re in a head-to-head and everyone knows this in your league, your best bet is to trade him to someone who needs a lot of help to get into the playoffs. You can throw in the “Melo wants to play” card, too.

LaMarcus Aldridge (4) - Another injury guy. Aldridge’s thumb has a torn ligament, so an aggravation could happen. Now that they have Robin Lopez back, he might opt for surgery should something happen. I’d want a top-30 player back in return. I’d start with a top 20.

Ryan Anderson (21) - He made the most out of Anthony Davis. His 24-point, five-trey game on Friday has really buoyed his value. You can probably deal him for a top-40 guy, which makes sense.

Eric Gordon (37) - He is on fire from deep, which explains the bump in value. Here’s a look at his shot chart in his last nine (top) compared to before this hot stretch: 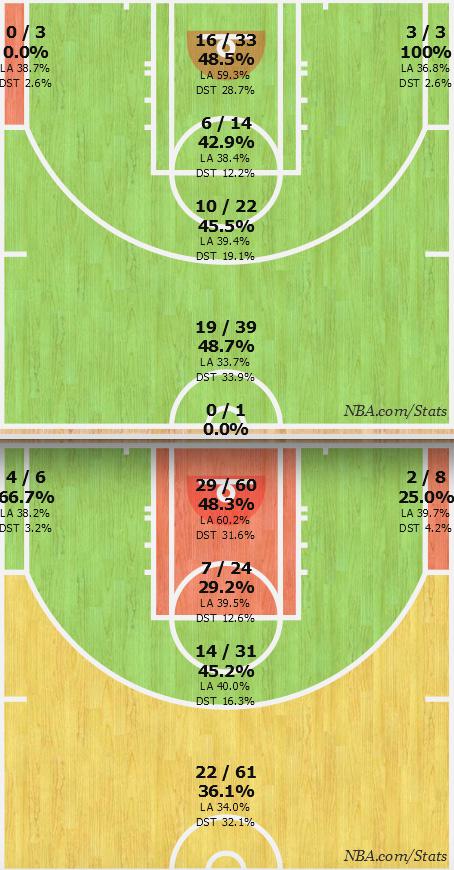 He is not this good and he’s also extremely injury prone. Deal him for a top-60 guy.

George Hill (125) - He had a nice game on Wednesday, but there’s almost no chance he stays healthy.

These guys are playing great and I wouldn’t deal them unless I get an offer I can’t refuse.