We're down to the wire here with a little over a month to go. We'll get into some schedule stuff a little bit later, but I just wanted to talk about the hot pickup from Thursday night, Arron Afflalo.

He has been a disappointment after a solid 2013-14 season. This year, he's made just 42.6 percent from the field for averages of 13.9 points, 3.3 boards, 1.9 dimes, 0.6 steals and 1.5 treys. Last season, he had one of his best years averaging a career-high 18.2 points with 3.6 boards, 3.4 dimes and 1.8 treys. Afflalo is going to have to play minutes close to 35 because he plays a similar style as Wesley Matthews at least on paper. So the big question will be whether or not he fits. Let's see if we can figure out why. Here's a look at his shot chart this season (top) vs. last year (bottom): 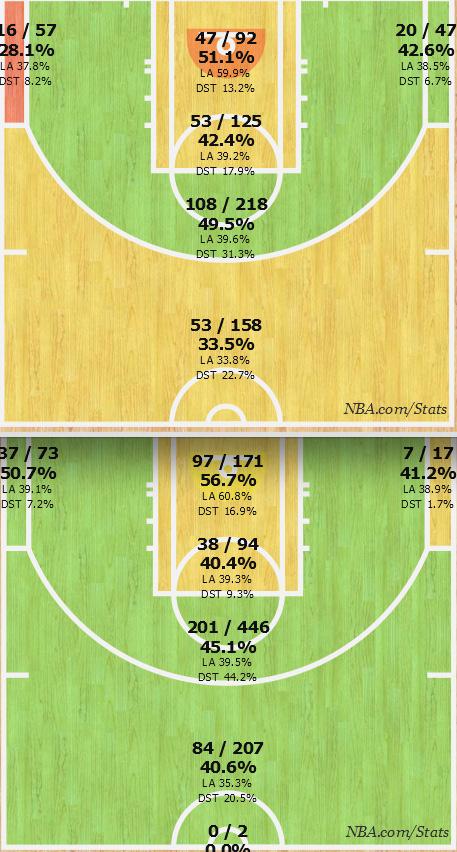 The biggest issue is behind the 3-point line. Afflalo has really fallen off above the break this year and his frequency has gone up, which is a huge reason why he's seen his effective field goal percentage (eFG%) take a 3.2 percent dip this year. Plus, you'll also notice he's taking 3.7 percent less shots at the rim this year while also making 5.6 percent less at that range when he's there, too. That is likely a product of the system in Denver. Afflalo actually made 64.7 percent at the rim in his previous four seasons, so I'd expect him to be a lot better there. Wes was actually one of the best shooting guards at the rim in his last two seasons, making 70.0 percent from there. Very good. Taking it a step further, here's a look at his dribbling and closest-defender data from this year (top two) and last year (bottom two) for Arron: 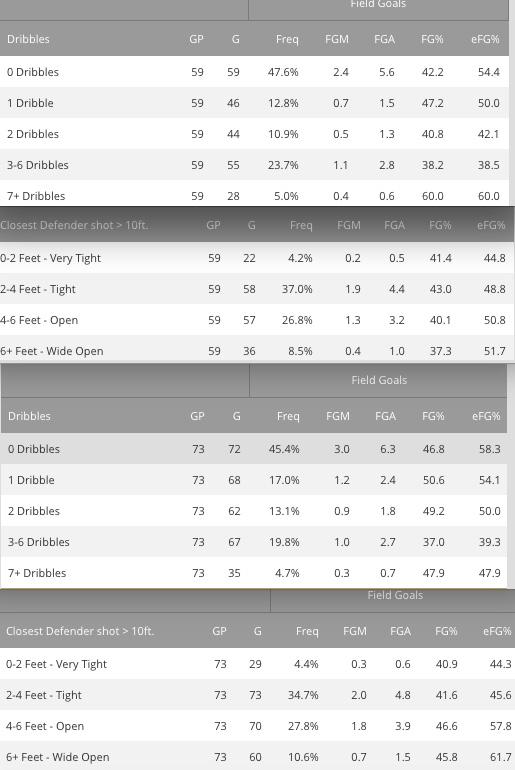 He has been much, much worse on wide-open and open shots. This has a lot to do with his not having help next to him and he's also been much worse off the ball in general. There are big enough differences in his frequency to suggest this year is a bigger fluke than it even looked like.

As long as coach Terry Stotts doesn't get sloppy -- that seems doubtful -- Afflalo should slide into Wes' role. His steals won't be great, but there's a good chance he matches Wes in the other categories after a little adjustment period.

As mentioned, we're going to take a look at some schedule stuff for season-long owners in daily leagues. If you're a savvy owner, you know how to stream properly. If not, let's go over it here.

So as you know, there are going to be nights in which your team is going to have active players on your bench. In other words, your team has 10 spots for players to play, but you have 12 guys on your roster. This is going to happen on several Wednesday and Friday nights when the NBA has double-digit games. It's much less likely to happen on Thursday and even Tuesday.

If you can add the players who avoid playing on these busy nights, you are going to get more games from your guys and more stats. Basically, if your worst player plays on three 12-game nights, he is of almost no use to you because he'll be on your bench. If you have that guy with two games on three-game nights, you're going to get all of his stats.

With that info in mind, I put together a spreadsheet of which teams play on light, normal and heavy nights. You'll see the first three columns have 1-5, 6-9 and 10+ to seperate the number of games on a night. Those are for the three upcoming weeks. The finall three columns are for the last two weeks. Here we go:

If you have the week of April 13 on your schedule (only goes until Wednesday), it's pretty simple and there are only a few things to know. The Raptors, Celtics, Wizards, Pacers, Clippers and Suns play on Tuesday. The Suns and Spurs are the only two teams to not play two games that week.

The Knicks have a ton of games (13, more than any team) and they get are awesome for streaming, too. The sad part is that they don't have a lot of studs. You can add Andrea Bargnani, Tim Hardaway Jr. and Langston Galloway, but they might have more bad games than good ones.

The Rockets also have a perfect schedule with four stream games. They are going to be very helpful leading up to the semifinal and final weeks.

The Jazz don't have a lot of games, but the position of their games is great. Although, there are not many good pickups unless Rodney Hood or Trevor Booker get hot.

The Celtics, Heat, 76ers and Hawks have a nice amount of games, but they're both not going to be great for streaming. The Mavs have an awful schedule for the first three weeks with a two-gamer coming up. Basically, if you have Al-Farouq Aminu and need to make a run, I'd consider cutting him. Also Rajon Rondo is not going to help you much either.

OK, so this is really the reason why I wrote this column. I also just wanted to remind you to look at your schedules and try to map out how your week is going to go with your games played. You'll want to see which players are on a back-to-back set and try to get both games out of them. If you can stack your lineup on Sunday, try to get two guys who play on Monday and Tuesday, then add guys who play on Thursday and Friday. That means you only used one move for four games that week. This is huge for owners with a move limit per week.

Miami wasn't great for the early part, but they're awesome for the stretch with three good streaming days with only one game on a busy night. That's amazing. You're definitely going to want to give an edge to their guys. If Wade goes down, I'd be watching very, very closely with Mario Chalmers or Tyler Johnson. Golden State is also fantastic, but there are not really any pickups. Although, they might rest their players, so keep an eye on them. Portland and the Nets also have a couple terrific streaming games.

As for the bad ones, the Nuggets, Wizards and Magic play all but one of their six games on a bad stream night. That sucks. The Cavs only have five games for the NBA low, so it doesn't matter what they're schedule stream is. They are not going to help you much. Memphis, Philadelphia, New York and Dallas are also really sub-par. The Kings, Spurs, Lakers and Hornets have eight games and have about four decent stream  nights.

I hope this helps! Hit me up @MikeSGallager on Twitter with any ideas and I'll probably be doing a column on back-to-back sets to help you set up your title run.