Tuesday's Pickups of the Day

Avery Bradley - Pick him up if he was dropped.

Manu Ginobili - One of the best low-minute players in the NBA. Coach Pop special.

Mario Chalmers - SUPER NINTENDO CHALMERS. Maybe the team change can get him going. So far, so good.

Meyers Leonard - He is taking shots, so maybe he's not out for the season after all.

Lou Williams - Pretty good chance he was dropped, but he's been really bad this month before the solid Monday.

T.J. Warren - SCORIN' WARREN! Check out his shot chart in his last four: 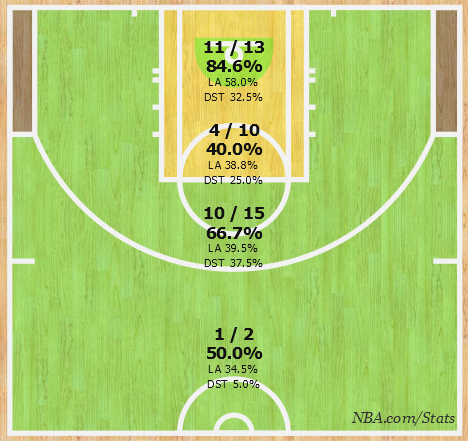 C.J. Miles - I'm not a Miles guy because he's such a roller coaster.

Alex Len - Baby steps. We gotta see him do it with Markieff Morris back, though.

Noah Vonleh - He probably has the inside track for the most PF minutes, assuming Leonard is out.