Breaking Down the Schedule

Daily fantasy poolies can take advantage of schedules and exploit a benefit that has real world effects on NHL standings. Some teams looking for a playoff spot or a little boost, or as insurance policies, using an auspicious scheduling quirk creates advantages in tight races.

Featured this season (2018-19) is the Battle of Alberta, one of the areas affected by teams playing a lot of back to back games as they traverse through West Coast road trips.

If a team plays in Edmonton this season, they’ve likely played in Calgary the previous night. It’s inevitable as passing through southern California, making a stop in both Anaheim and Los Angeles, the dreaded California corridor.

This season, there’s an eerie balance among the Ducks and Kings, sharing seven games apiece where teams alternate playing back to back through each city. Anaheim has two games in mid- to late-March that present a scheduling gem if they’re struggling for a playoff spot, or if they need to add separation between themselves and other clubs for a postseason berth.

This presents a double whammy for the team playing Game 1 of the back to back; beating up on the team that has had at least one day of rest, and sending them to a rested divisional rival is strictly not ideal.

The team hosting Game 2 gets the double advantage, one by playing a tired opponent, while the Game 1 team had to play a fully ready, rested team starting the back to back.

One divisional game appears for the Kings, with two games for the Ducks.

Los Angeles faces this advantage six times after the calendar turns to 2019, while Anaheim has four games in 2018. An early season benefit to bank some points against teams almost exclusively from the East Coast.

If there’s no risk to losing valuable points to a Conference rival, a team may find it less than ideal to exert unnecessary energy for two negligible points early in the season.

These are important games and Anaheim can gain a distinct edge.

League sophomore Vegas has become the team that plays rested versus a team playing the Ducks the previous night. Two of those games feature division rivals, Los Angeles (karma biting the Kings here) and Arizona.

Colorado and Arizona share their own small set of games as do Ottawa and Montreal, similar dynamics in smaller numbers. Arizona is featured in many of the Alberta trips, as we shall see.

This season, it’s all about the battle of Alberta and Florida.

Calgary has shared the benefit of teams playing games on consecutive nights as part of a road trip through wintry Alberta and has been on the receiving end of favorable scheduling. In 2018-19, 10 teams play rested Edmonton the night after they open up back to back games versus Calgary. Divisional rivals Anaheim do it twice, Los Angeles once and Arizona once. 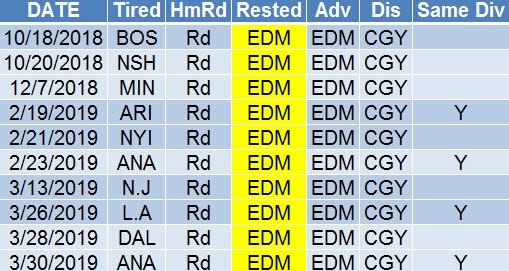 Half of the teams travel the other way, skating against Calgary after starting game one of a back to back on consecutive nights against the Oilers, including the Coyotes.

Three of those teams are from the same division, including Vegas, Arizona and the Kings once again.

In the southeast US, 10 teams play Florida on the second night of back to back games, having played the Tampa Bay Lightning the previous night. 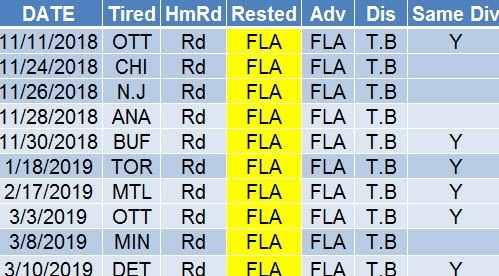 Florida presents an interesting story heading into 2018-19. With McKeen’s Hockey, we placed Florida in a playoff spot and predicted a 100-point season. The additions of Mike Hoffman and Troy Brouwer offer options and depth that can really vault the club to new heights coming off a sub-par 2017-18, health permitting.

The schedule is favorable too.

Not only are the division rivals plentiful, but they’re the predicted bottom feeders; Ottawa twice, Detroit, Montreal and Buffalo as well as the higher rated Toronto.

If there’s a boost in getting ahead in the division, it’s about stepping up against weaker opponents, when they’re potentially vulnerable. This is a perfect situation for the Panthers to leap into a playoff spot. They could be what the Devils were in 2017-18, a great story with individual components, like Taylor Hall in their case.

There’s an added bonus, in the form of an insurance policy of having three games after the trade deadline. If they struggle for a playoff spot, this kind of favorable scheduling can prove fruitful.

Daily Fantasy bettors should be aware of these games to target.

An old study I did evaluated rested teams as winning approximately 59% of the time, which makes these inter-divisional games crucial, but not a sure thing. Hockey is unpredictable.

Hopefully with a few of these targeted games, some can find the benefit of playing the percentages and capitalizing over a series of games to have daily, weekly, monthly and season-long success.