Women will have more chances to bring medals home on Day 4 of the Tokyo Olympics.

Simone Biles will have her first chance to earn a medal by leading USA Gymnastics into the women’s team final and USWNT will look to clinch an automatic spot in the quarterfinals.

In swimming, Lilly King will race in the final for the women’s 100m breaststroke, an event where she set the world record in 2017

Here’s what events to look forward to. 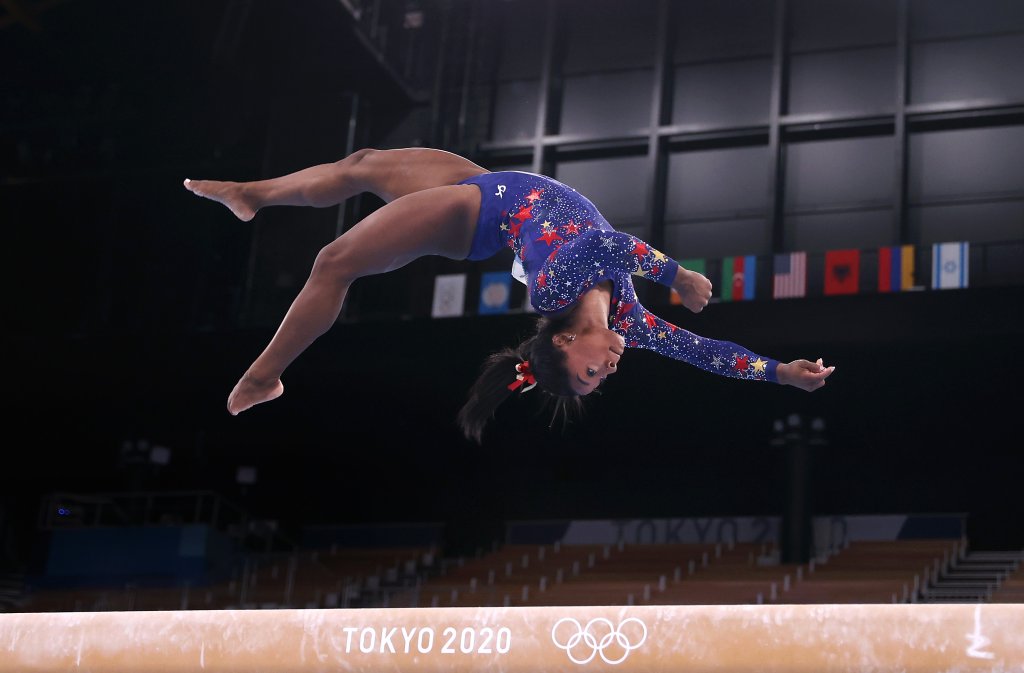 Simone Biles of Team USA competes on balance beam on day two of the Tokyo 2020 Olympic Games at Ariake Gymnastics Centre on July 25, 2021 in Tokyo, Japan. Biles and teammate Sunisa Lee finished 1-2 during the third subdivision of the qualification round.

The GOAT of gymnastics will have her first chance to earn a medal at the 2020 Tokyo Olympics.

Simone Biles earned the top all-around score in qualifying, but there’s work to be done if she wants to come out on top in the women’s team final, which begins at 3:45 a.m. PT on Tuesday. Team USA finished with an overall score of 170.562 in qualifying, good for second place behind the Russian Olympic Committee’s 171.629. China, France and Belgium finished qualifying in third, fourth and fifth, respectively.

Biles will be joined by 20-year-old Jordan Chiles, 18-year-old Suni Lee and 18-year-old Grace McCallum in the team event. Lee finished third in qualifying with an all-around score of 57.166, while McCallum and Chiles finished 13th and 40th, respectively. While the U.S. owns two of the top three spots for all-around scores, ROC has the fourth, fifth and sixth-highest scores on its team.

Watch the women’s gymnastics team final live on the Olympic channel. You can stream full coverage here or with the Team USA tracker here. 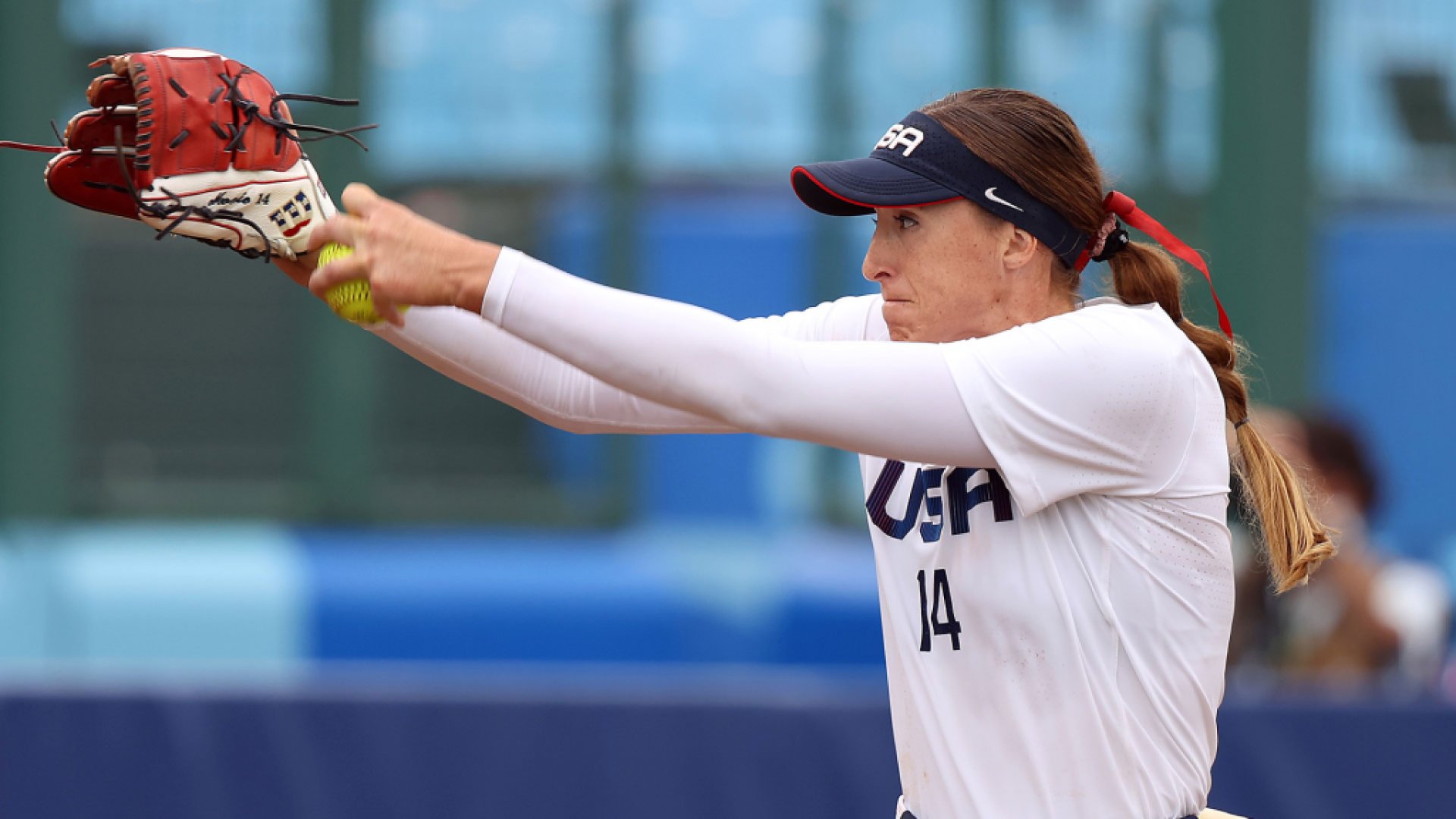 After a walk-off win against Japan on Sunday, Team USA will once again face the host nation in the softball gold medal game at 4 a.m. PT on Tuesday.

Both teams were 4-0 entering Sunday’s matchup and had clinched their spots in the gold medal game before facing one another in the final game of round-robin play.

The Americans have been led by outstanding pitching from Cat Osterman and Monica Abbott. Neither pitcher conceded a run over the first three games of the tournament. The team has also seen some timely hitting, as Amanda Chidester walked it off with a two-run single in the eighth inning against Australia on Saturday and Kelsey Stewart hit a walk-off home run against Japan on Sunday.

University of Oregon alum Janie Reed has started all five games in left field for Team USA, going 1 for 3 at the plate in their last game against Japan.

The game is a rematch of the 2008 gold medal game at the Beijing Olympics, where Japan became the first and only team to keep Team USA off the top of the podium in softball.

Watch the game live on NBCSN or stream it here. Regan Smith, of the United States, swims in a semifinal during the women’s 100-meter backstroke at the 2020 Summer Olympics, Monday, July 26, 2021, in Tokyo, Japan.

King will race in the final for the women’s 100m breaststroke, an event where she set the world record in 2017. She finished with the third-fastest time in Sunday’s qualifying, trailing fellow American Lydia Jacoby and South Africa’s Tatjana Schoenmaker, who broke King’s Olympic record with a time of 1:04.82.

Murphy, on the other hand, set the world record in the men’s 100m backstroke at the 2016 Rio Olympics. After finishing tied for seventh overall in Sunday’s heats, he posted the top time in the semifinals, putting him in line to repeat in the event.

The women’s 100m backstroke will also be an intriguing final after the Olympic record was broken in three consecutive heats on Sunday. Canadian Kylie Masse and American teenager Regan Smith each owned the record for exactly one heat before Australian Kaylee McKeown raised the bar in the final race.

The other final taking place on Monday is the men’s 200m freestyle. Kieran Smith, who already won bronze in the men’s 400m freestyle, will battle against Great Britain’s Duncan Scott. 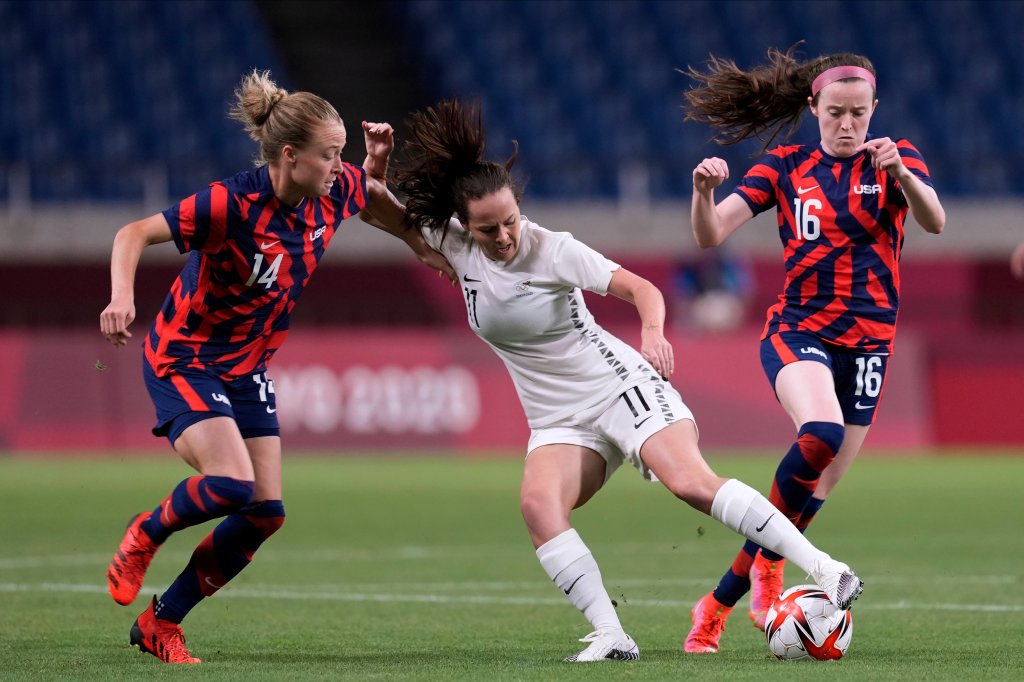 New Zealand’s Olivia Chance (11) battles for the ball against United States’ Emily Sonnett (14) and Rose Lavelle (16) during a women’s soccer match at the 2020 Summer Olympics, Saturday, July 24, 2021, in Saitama, Japan.

The U.S. women’s national soccer team got a much-needed victory over New Zealand on Saturday following a stunning defeat against Sweden to begin the tournament. Now, Portland Thorns standouts Becky Sauerbrunn, Crystal Dunn, Lindsey Horan and Adrianna Franch will take on Australia at 1 a.m. PT on Tuesday looking to clinch an automatic spot in the quarterfinals.

The USWNT is looking to return to the podium in Tokyo after missing it for the first time in the event’s history at the Rio Games.

Watch the game on USA Network or stream it live here.