Reigning Olympic gymnastics champion Simone Biles pulled out of the team finals on Tuesday after struggling to land a vault, telling NBC’s “TODAY” show that while she feels good physically, things “vary” from an emotional standpoint.

Biles said she was feeling the pressure of expectations, of winning gold medals and performing perfectly, before withdrawing from the women’s gymnasts’ team final competition, The New York Times reported.

She said she began “fighting all of those demons,” The Times said, and was wondering why she was at the Tokyo Games. She had already won four gold medals at the 2016 Games in Rio.

As she twisted over a vault, she realized she had lost her ability to know where she was in the air, the Times said, and she failed to stick her landing.

Biles said afterward at a press conference that she had not injured herself.

“No, no injury, thankfully,” she said. “And that’s why I took a step back because I didn’t want to do something silly out there and get injured.”

She said she thought it best that her teammates take over, which they did, winning the silver medal in the event

Biles said she did not know whether she would compete in individual events, including the individual all-around competition. She told Kotb that she would take it day-by-day.

A spokesperson for USA Gymnastics did not specify the nature of her medical issue, saying “she will be assessed daily to determine medical clearance for future competitions.”

Sarah Hirshland, the CEO for the U.S. Olympic and Paralympic Committees, applauded Biles’ “decision to prioritize your mental wellness over all else” and offered the organization’s “full support and resources.”

“Simone, you’ve made us so proud. Proud of who you are as a person, teammate and athlete. We applaud your decision to prioritize your mental wellness over all else, and offer you the full support and resources of our Team USA community as you navigate the journey ahead,” Hirshland said in a statement shared on Twitter.

The 24-year-old, considered to be the greatest gymnast of all time, bailed on her planned Amanar vault, opting for an easier Yurchenko 5/2 twist in mid-air and then struggling with the landing. An Amanar can score a maximum of 15.8. Biles received a 13.766.

It was a rare miscue by Biles who is the defending Olympic and world champion in the vault.

She was seen huddling with a trainer before exiting the competition floor with the team doctor.

Biles returned several minutes later with her right leg wrapped. She took off her bar grips, hugged teammates Grace McCallum, Sunisa Lee and Jordan Chiles before putting on a jacket and sweatpants.

“You guys go out there and do what you’ve trained to do,” Biles told her teammates after returning to the floor. “I’m sorry. I love you guys, but you’re going to do just fine. I love you. You guys have trained your whole entire lives for this. It’s fine.” 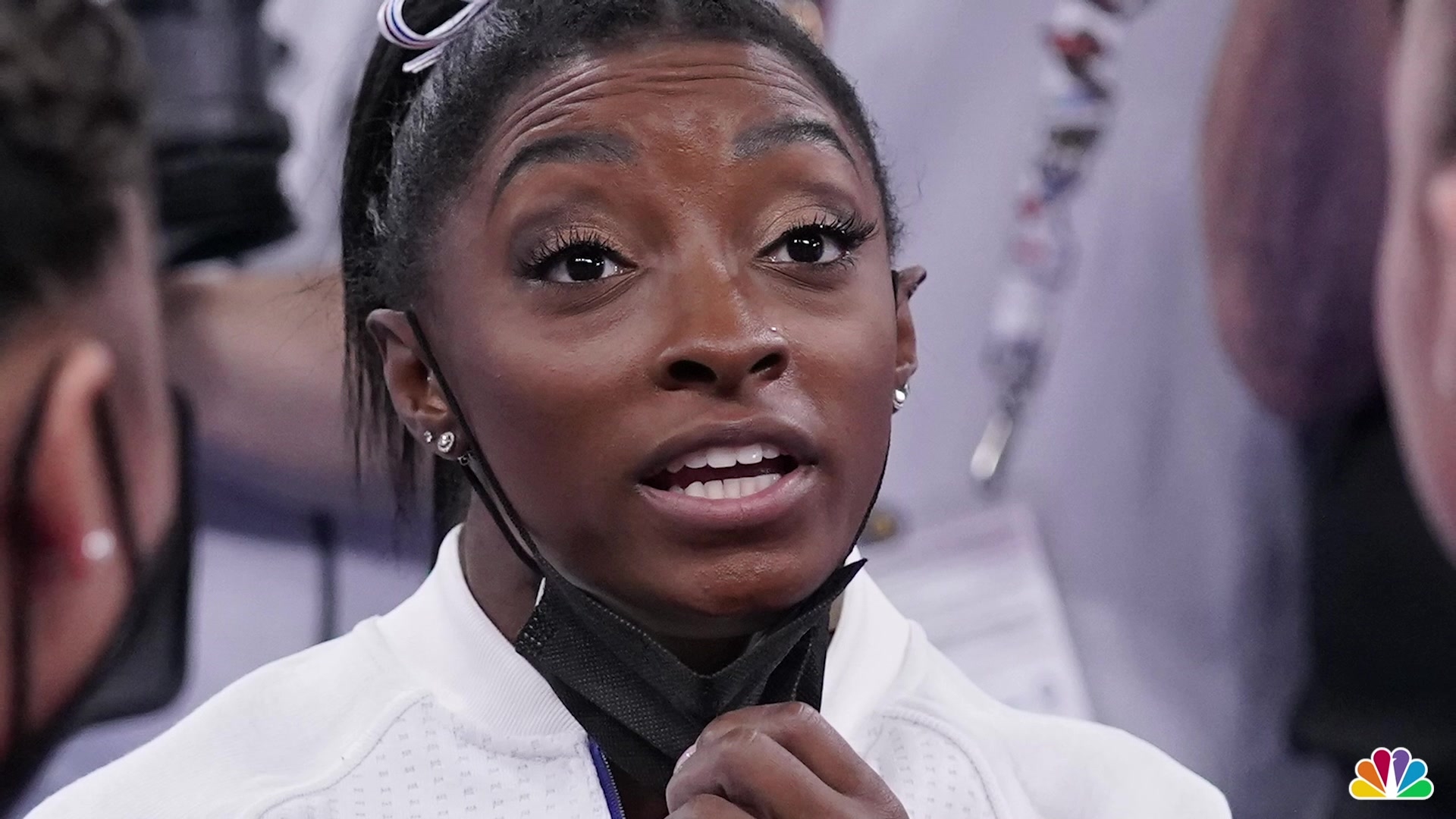 What Are the Types of Gymnastics and How Are They Scored? Your Questions Answered

Team USA was forced to finish the rest of the competition without her. Still, they hung in there for silver, with the ROC taking gold and Great Britain edging Italy for bronze.

“At the end of the day I think they should feel super proud of themselves because they went out there and stepped up to the plate and they showed the world that they’re still capable of being on the podium and look they’re Olympic silver medalists so I couldn’t be more proud of them,” Biles said.

On Monday, after the preliminaries round, Biles opened up in an Instagram post about the burden of carrying the weight of the sport on her shoulders.

“it wasn’t an easy day or my best but I got through it,” Biles wrote. “I truly do feel like I have the weight of the world on my shoulders at times. I know I brush it off and make it seem like pressure doesn’t affect me but damn sometimes it’s hard hahaha! The olympics is no joke! BUT I’m happy my family was able to be with me virtually they mean the world to me!

In a New York Times interview published last week, Biles spoke about the “unreal” wear and tear her body has endured after years of competing. Asked to name the happiest moment of her career, Biles said: “Honestly, probably my time off.”

There was no immediate word on whether Biles, who won five medals in 2016 Rio Olympics, will compete in the all-around final on Thursday night or any of the four individual finals she qualified for.

“I think that Simone is the biggest story going into the Olympics, so this is just, it’s really, really devastating,” Raisman said on the “TODAY” show. “But I think it’s also just really important to think about how much pressure has been on her, and there’s only so much that someone can take. You know, she’s human, and I think sometimes people forget that. And Simone, just like everyone else, is doing the best that she can.”

News of Biles pulling out of the team finals also sparked a devastating reaction on social media, as well wishes for the G.O.A.T.