On Day 11 of the Tokyo Olympics, track and field action continued with a wild day at the Olympic Stadium. Also, Simone Biles made her Olympic return with a bronze medal in the balance beam final and the United States men’s basketball team won its quarterfinal matchup to advance to the semifinals. Scroll down for the full recap from Tokyo:

Mu wasn’t the only medalist in Tuesday’s final. Raevyn Rogers claimed bronze with a 1:56.81, less than one-tenth of a second faster than Great Britain’s Jemma Reekie. Great Britain’s Keely Hodgkinson won silver at 1:55.88.

Sweden’s Armand Duplantis came away with gold at 6.02m. He nearly broke his own world record in the process, missing out on his three attempts at 6.19m, just slightly above his record mark of 6.18m.

A trio of Americans will race in the men’s 200m final after advancing in Tuesday’s semifinals.

Noah Lyles, the owner of the fourth-fastest time ever in the event, was third in his heat after taking his foot off the gas ahead of the finish line. His 19.99 result was nearly half a second slower than his personal best of 19.50. Lyles, Canada’s Aaron Brown and Liberia’s Joseph Fahnbulleh finished within one-thousandth of a second of each other.

The final for the event takes place at 8:55 a.m. ET on Wednesday.

Japan’s Tomoa Narasaki, who entered as the favorite in his home country, finished second in qualifying, while France’s Mickael Mawem was the leader in qualifying.

Anita Wlodarczyk earned gold in the women’s hammer throw on Tuesday with a winning result of 78.48m. With gold medals in 2012 and 2016, she became the first female athlete to win three consecutive Olympic titles in an individual event.

The Boss’ daughter was in action on Tuesday.

Springsteen, the daughter of Bruce Springsteen and Patti Scialfa, finished with a score of 87.15 during Tuesday’s equestrian individual jumping qualifying. She and her horse, Don Juan van de Donkhoeve, hit a rail in one of her last jumps and totaled four penalties. She just missed the cut of 30 riders who advanced to the final.

Brazil, Spain to square off in men’s soccer final

Brazil and Spain advanced to the men’s soccer final with narrow semifinal victories on Tuesday.

First, after a scoreless first 120 minutes, Brazil beat Mexico with a 4-1 edge in the penalty shootout. Spain then beat Japan in extra time thanks to a goal from Real Madrid’s Marco Asensio in the 115th minute.

Brazil will look to defend its gold medal against Spain at 7:30 a.m. ET on Saturday.

The American dominated the competition en route to a gold medal.

She first beat Japan’s Sara Dosho, who was the defending gold medal winner in the event, by a score of 10-0. The native of Katy, Texas, followed that with a win against China’s Zhou Feng 10-0. Mensah-Stock took down Ukrainian wrestler Alla Cherkasova 10-4 in the semifinals to give her the chance at the gold.

Holloway finished first in his heat, crossing the finish line in 13.02 seconds. It was the fastest time of the day by .15 seconds and was just .22 seconds off the world record.

Simon Martirosyan of Armenia also set an Olympic record, lifting 195 kg in the snatch. He earned silver while Arturs Plesnieks of Latvia won the bronze.

USWNT’s Alyssa Naeher out for bronze medal game vs. Australia

Naeher and the USWNT shut out Australia in a 0-0 draw during the group stage last week.

Suni Lee completed her final event of the Tokyo Olympics with a fifth-place finish in the balance beam.

The judges gave Lee a total score of 13.866, with a 6.400 on difficulty and 7.466 on execution. She tied Canada’s Elsabeth Black with the 13.866 total, but Black received fourth place based on the execution score tiebreaker.

Lee had a couple of slip ups in her routine. She nearly fell off the beam at one point, wobbling to keep her balance but recovered to stay on. Even Lee doesn’t know how she did it.

On her dismount, it wasn’t a clean landing for Lee, either. As a result, she ends the Tokyo Olympics with three medals: gold in the individual all-around, silver in the team event and bronze in the uneven bars.

Lee’s family supported her from afar in Saint Paul, Minn., like it has throughout the Games.

The United States just missed the podium in the final artistic gymnastics event of the Tokyo Olympics.

Sam Mikulak ended his Olympic career with a sixth-place finish in the men’s parallel bars.

The three-time Olympian previously announced that he would be retiring after the Tokyo Olympics. He finishes his career without an Olympic medal.

A pair of records were broken at the Izu Velodrome on Tuesday.

Germany won the women’s team pursuit final with a world record time of 4:04.242. Less than a half hour later, the Netherlands set an Olympic record in the men’s team sprint with a time of 41.369.

Great Britain earned silver in both events. The country also had a team advance in the men’s team pursuit following a collision with Denmark.

Maggie Steffens, who finished with three goals, got the scoring going early, with two goals in the first two minutes to kickstart the offense. That propelled the Americans to a quick 7-1 lead in the first quarter. That lead was built to 11-3 by the end of the first half.

Neither team scored in the third quarter, but the U.S. added onto it in the fourth to finish the match with a 16-5 victory.

The United States advances to the semifinals, where it will face the winner of the Australia-ROC quarterfinal.

American Andrew Capobianco did not medal in the men’s 3m springboard diving event, finishing 10th out of 12 divers. He ended the event with a total score of 401.70.

Capobianco, who had won silver in the men’s synchronised 3m springboard, struggled with his reverse 3½ somersaults dive and back 3½ somersaults dive. He had the second-lowest score on each of those dives, sending his total to the bottom of the pack.

In an extraordinarily fast field, American Rai Benjamin took silver in the men’s 400m hurdles, finishing behind Karsten Warhlom of Norway, who broke his own world record in 45.94 seconds. Benjamin’s time was the second-fastest in history. Brazil’s Alison Dos Santos won the bronze and also exceeded the previous world record.

Brittney Reese won silver in the long jump, her third Olympic medal after taking silver in 2016 and gold in 2012. Malaika Mihambo of Germany won the gold with a 7.00m jump, .03 ahead of Reese. Ese Brume of Nigeria won the bronze. The other American in the final, Tara Davis, placed sixth.

Lisa Carrington of New Zealand continued to smash records in the women’s canoe sprint on Monday night. She set an Olympic record in the semifinals of both the single kayak 200m and, with partner Caitlin Regal, in the double kayak 500m. Both records came down again in the finals, giving Carrington two more gold medals. 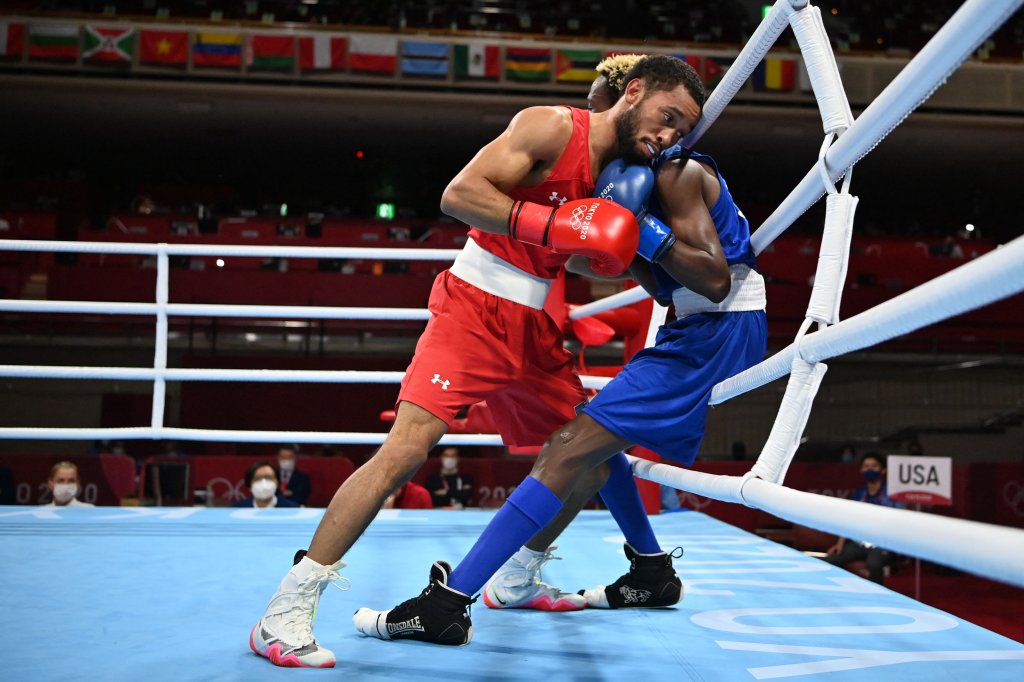 American boxer Duke Regan will have a chance to fight for gold in the men’s featherweight division.

Regan defeated Samuel Takyi of Ghana, 4-1, on the scorecards to advance to the gold medal match. He will face the winner of the semifinal match between Cuba’s Lázaro Álvarez and Albert Batyrgaziev of the Russian Olympic Committee that starts at 5:03 a.m. ET.

Regan, who turned pro in the summer of 2020, is looking to become the first American featherweight medalist since Rocky Juarez won silver at the 2000 Sydney Olympics.

Already the most decorated American woman in track and field, Allyson Felix made the first step toward her 10th Olympic medal by advancing in the heats of the women’s 400m. Fellow Americans Quanera Hayes and Wadeline Jonathas also made the semifinals, which will be on Wednesday at 6:30 a.m. ET.

Luka Doncic scored 20 points and Zoran Dragic had 27 as Slovenia routed Germany, 94-70, to advance to the semifinals in men’s basketball. In its first Olympic appearance, Slovenia has won its four games by an average of 21.25 points. The national team has yet to lose a game in which Doncic has played.

Slovenia will play either Italy or France in the semifinals on Thursday at 7 a.m. ET.

Ross, Klineman through to the semifinals

April Ross and Alix Klineman continued their run in beach volleyball, defeating German pair Laura Ludwig and Margareta Kozuch, 21-19, 21-19. They had 10 digs to the Germans’ six and three aces to the Germans’ one.

Ross and Klineman have only dropped one set in Tokyo. They will play Switzerland’s Joana Heidrich and Anouk Verge-Depre in the semifinals on Wednesday at 8 p.m. ET. Read more here.