As Day 12 of the 2020 Tokyo Olympics began, Team USA had the chance to extend its lead in the medal count, and it did.

Keep up with everything that happened on Day 12 of the Tokyo Olympics:

Courtney Frerichs won her first Olympic medal in the 3000m steeplechase. After taking the lead for most of the race, she was passed on the final lap by Uganda’s Peruth Chemutai. Chemutai went on to win the first gold medal by a Ugandan woman in Olympic history. She finished in 9:01.45, and Frerichs finished in in 9:04.79.

American track star Sydney McLaughlin took the gold medal in the women’s 400m hurdles final on Tuesday night, and set a world record of 51.46 seconds to do it.

Reigning Olympic champion Dalilah Muhammad from the United States came in second for the silver medal.

Read more from Day 12 below:

The first climbers in one of the newest Olympic sports have been determined.

Slovenia’s Janja Garnbret was the top finisher with 56 points in Wednesday’s three-discipline qualifying round for women’s sport climbing, which is making its Olympics debut at the Tokyo Games.

Garnbret finished 14th in speed, an event where climbers race up a 15-meter wall at a 95-degree angle, with a time of 9.44 seconds that earned 14 points.

She won bouldering, where climbers complete different challenges on a 4.5-meter wall, with a 30 hold number to earn one point.

She finished fourth in lead, where a harnessed climber has six minutes to scale a 15-meter wall with the highest climb getting the win, to earn four points.

All three scores are multiplied by one another, with lowest score determining the winner.

The United States’ Brooke Raboutou was the fifth best qualifier with 192 points. She finished 12th in speed with a time of 8.67 for 12 points, second in bouldering for two points and eighth in lead with a 26-plus hold number for eight points.

Andre de Grasse edged out three Americans down the stretch to win gold in the men’s 200m final. He crossed the line in 19.62 for his first gold medal.

Americans Kenneth Bednarek and Noah Lyles round out the podium in second and third place, respectively. Bednarek finished in 19.68, and Lyles finished in 19.74. Seventeen-year-old Erriyon Knighton finished in fourth at 19.93.

Allyson Felix will attempt to win another medal in the women’s 400m final. The 35-year-old mother finished second in her heat to automatically qualify for the race. Felix crossed the finish line in 49.89 seconds.

The semifinal win sets up another chapter in the Taylor-Yazdani rivalry. Taylor upset the 2016 Olympic gold medalist in their first matchup at the 2017 World Cup. Their second matchup came at the 2018 world championships, and Taylor emerged victorious once again. Yazdani has not lost a match since, setting up a spectacular final on Thursday.

Directly following Taylor’s match, another Team USA wrestler was on the mat. This time, Helen Maroulis lost a 2-1 semifinal contest against Japan’s Risako Kawai. Maroulis was seeking her second Olympic gold medal after winning the 53kg tournament at the 2016 Rio Olympics.

Italy defeated Denmark in the gold medal race to take the gold, finishing the race with an average speed of 64.856 km/h.

Italy had not won gold in the event since 1964.

The U.S. women’s basketball team, after its 53rd straight win, is two victories away from a seventh straight gold medal.

Team USA got off to a fast start against Australia en route to a 79-55 win in its quarterfinal matchup.

Breanna Stewart had a game-high 23 points on 8-for-10 shooting. Brittney Griner added 15 points and eight rebounds.

United States’ Delaney Schnell and Katrina Young both qualified for the semifinals in the women’s 10m platform diving event.

Schnell finished third out of all the divers with a total score of 360.75. She had the best score in the back 3 1/2 somersaults dive.

Katrina Young snuck into the top 18 to advance, ending with the 17th-best score. Her last dive, the back 2 1/2 somersaults 1 1/2 twists dive, is what jumped her into a qualifying spot, as her score was tied for third-best. She finished with a total of 286.65.

In an Olympic tournament filled with some of the biggest names from around the world, American Nelly Korda is just one stroke behind Sweden’s Madelene Sagstrom in the women’s golf tournament.

Korda is the No. 1 ranked golfer in the world but Sagstrom had a bogey-free 5-under par 66 in 100-plus degree weather to stay ahead in Tokyo.

Aditi Ashok of India is also tied with Korda in second place.

The second round of the Olympic competition will be televised stating at 5:30 p.m. Wednesday on the Golf Channel.

The U.S. men’s water polo team weren’t able to advance to the semifinals of the Olympic tournament, falling to Spain 8-12.

Hanes Daube scored three goals in the loss while Alex Bowen, Ben Hallock and Luca Cupido each netted one goal a piece.

Alex Obert was the second-leading scorer with two goals.

USA’s Richard Torrez Jr. to Fight for Gold in Boxing

The contest between Torrez Jr. and Kazakhstan’s Kamshybek Kunkabayev ended with a referee stoppage due to injury in the second round. Torrez Jr. was up on all five judges’ cards at the time of the stoppage.

The 22-year-old American will square off against the top-ranked super heavyweight Bakhodir Jalolov of Uzbekistan in the gold medal bout on Sunday at 2:15 a.m. ET.

America’s Oshae Jones fell in a 4-1 decision to China’s Hong Gu in the women’s welterweight category.

Round 1 was a close one, with two of the five judges giving Jones the edge. But Gu persisted, coming out stronger in Round 2 and unanimously taking the final round to clinch the win and a chance to fight for the gold medal.

With her bronze, Jones becomes the first U.S. woman to compete and earn a medal in welterweight, which is making its debut on the women’s side in Tokyo. She’s also the first American boxer to medal this summer.

Gu will go on to face Turkey’s Busenaz Surmeneli in the final on Saturday, while Lovlina Borgohain of India won the other bronze medal in women’s welterweight.

Boxing is one of the few Olympic sports that award two bronze medals in each event, given out to the losers of each semifinal matchup.

The American pair of Stu McNay and David Hughes ended the race with a time of 26:54, five seconds behind New Zealand’s Dan Willcox and Paul Snow-Hansen for the bronze.

Australia’s pair of Mathew Belcher and Will Ryan won gold. Silver was taken by Sweden’s Anton Dahlberg and Fredrik Bergstrom.

The United States’ baseball team held on to a 3-1 win over the Dominican Republic in the knockout stage of the baseball tournament.

Scott Kazmir pitched five shutout innings in the win as Triston Casas and Tyler Austin homered for the Americans.

After Kazmir escaped a first inning, bases-loaded jam without surrendering a run, the offense of the Americans struck first with Casas staying red hot, launching a two-run home run in the bottom of the first. It was the Boston Red Sox prospect’s third home run of the tournament.

Austin extended the U.S. lead to 3-0 with a solo shot to deep center field in the fifth inning. It was his second home run of the Games.

Down to their final out, the Dominican Republic did break the shutout as Charlie Valerio hit a solo home run off of closer David Robertson to make it a 3-1 game. After a walk, Robertson struck out Yefri Perez to close out the victory.

The U.S. will wait and play the loser of the South Korea-Japan game. That game will be Thursday, Aug. 5 at 6 a.m. ET.

U.S. Women’s Basketball Team Up Big on Australia at the Half of Quarterfinal Matchup

So much for those slow starts by the U.S. women’s basketball team.

Team USA, which in each of its three pool play games trailed after the first quarter, jumped out to an early lead on Australia in its quarterfinal matchup on Wednesday. The U.S. went on a 17-0 first-quarter run and added to its lead in the second to take a 48-27 advantage at the half.

Despite being without setter Jordyn Poulter and opposite hitter Jordan Thompson, the United States women’s volleyball team handled the Dominican Republic with relative ease, winning 3-0 in the quarterfinal matchup.

Andrea Drews was sensational on the attack, securing 21 points on 36 attempts to finish with attack points. Michelle Bartsch-Hackley added 13 points and Haleigh Washington had seven attack points and two blocks.

The U.S. will face the winner of Serbia and Italy in the semifinals. That match will take place Friday, Aug. 6 at 8 a.m. ET.

Thirteen-year-old Sky Brown of Great Britain won the bronze medal in the women’s park skateboarding final with a score of 56.47.

Brown, who just turned 13 years old on July 7, was a favorite to become the youngest Olympian to ever win an individual gold medal.

Hiraki is just 12 years old, making her and Brown the youngest Olympic medalists since 1936.

The United States did not win a medal in the women’s swimming 10km final on Tuesday night.

After winning the silver at the 2012 London Olympics, Haley Anderson came in sixth place to miss the Tokyo podium. Fellow American Ashley Twichell finished behind Anderson in seventh. 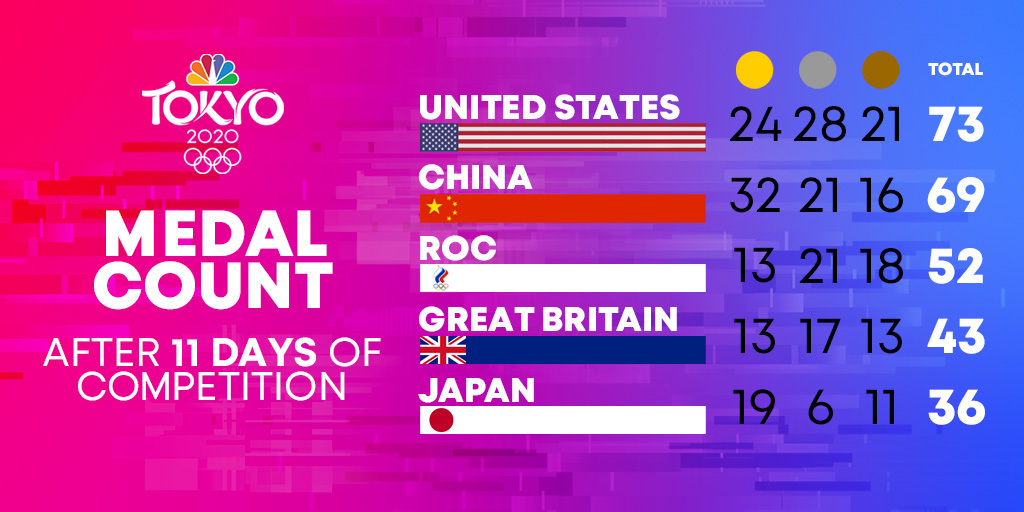 Behind them sits China with 69, including a Games-high 32 gold medals. The Russian Olympic Committee has 52 medals, followed by Great Britain with 43 and Japan with 36.

Olympic marathon swimming is back, and it begins with the women’s 10km final on Tuesday night.

Team USA has two women competing in the event: Ashley Twichell and Haley Anderson. Anderson placed second at the 2019 World Championship, and also won the silver medal at the 2012 London Olympics.

The women’s golf competition at the Tokyo Olympics begins on Tuesday evening.

American superstars Sydney McLaughlin and Dalilah Muhammad will square off in the women’s 400m hurdles final at 10:30 p.m. ET.

McLaughlin came into Tokyo with the world record in the event, while Muhammad won the event at the 2016 Rio Olympics.

Fellow American Anna Cockrell will also be racing in the final after placing second in the third semifinal heat on Tuesday.