The last day of competition at the Tokyo Olympics has come to its conclusion. All there is to do now is sit back and watch the Closing Ceremony from Tokyo on Sunday morning.

It was an exhilarating final day for Team USA, which secured its victory in the gold medal count over China in the final hours of the Tokyo Olympics.

Here is a look at the headlines from Day 16 in Tokyo now that all the events have gone final:

The Games are complete!

In the final competitive event of the Tokyo Olympics, the Serbia men’s water polo team defeated Greece 13-10 in the gold medal game.

Dusan Mandic, Nikola Jaksic and Andrija Prlainovic each had three goals for Serbia, which won a second straight gold.

The Olympics officially conclude with the Closing Ceremony on Sunday at 7 a.m. ET. Here’s how to watch.

The United States finished with the most gold medals at 39, pulling ahead of China on the final day, and the most overall medals at 113.

Pauletta Foppa and Allison Pineau each have seven goals for France.

France swept the event, with the men’s team defeating Denmark 25-23 in the gold medal game.

Torrez had a chance to win the first U.S. gold medal for Team USA since Andre Ward won silver in Athens in 2004 and be Team USA’s first super heavyweight champ since 1984.

The United States has now completed its competitive events at the Tokyo Olympics.

United States Moves Ahead of China With 39 Gold Medals 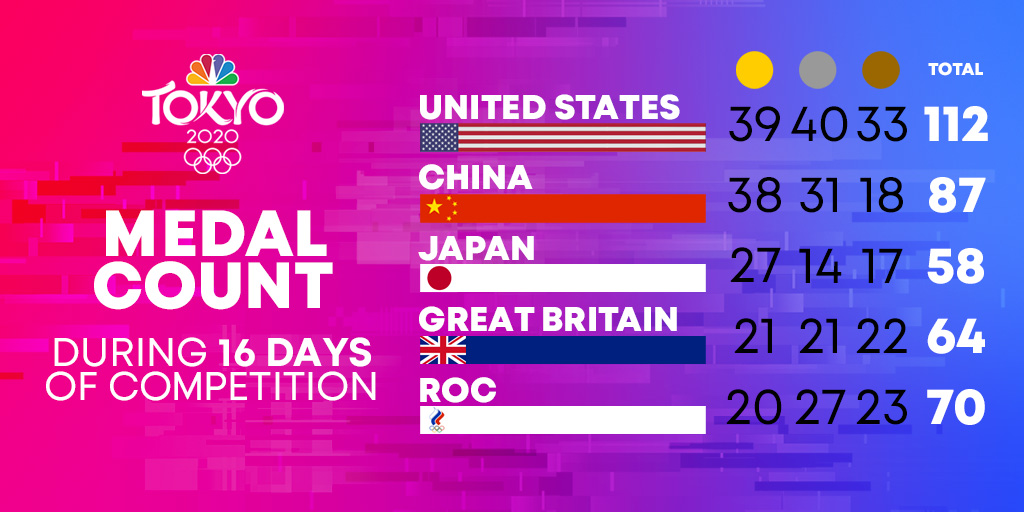 A spike by Jordan Larson gave the U.S. women’s volleyball team its first ever gold medal.

The U.S. women’s basketball team secured its seventh straight gold medal with a win over Japan at the Tokyo Olympics.

American Jennifer Valente won the gold medal in the women’s cycling omnium on Saturday with a total of 124 points.

Valente took the top spot after the omnium’s first event, and held the lead to become the first U.S. woman to win an Olympic track cycling gold. This gold medal adds to her cycling track team pursuit bronze medal from earlier in the Games.

The United States finished in sixth place in the men’s water polo tournament at the Tokyo Olympics.

Kenya’s Eliud Kipchoge defended his Olympic gold medal, becoming just the third runner in history to do so. Kipchoge finished with a time of 2:08:38.

Abdi Nageeye from the Netherlands took the silver medal and Belgium’s Bashir Abdi won the bronze.

As the last day of competition kicks off in Tokyo, the United States has 108 medals. 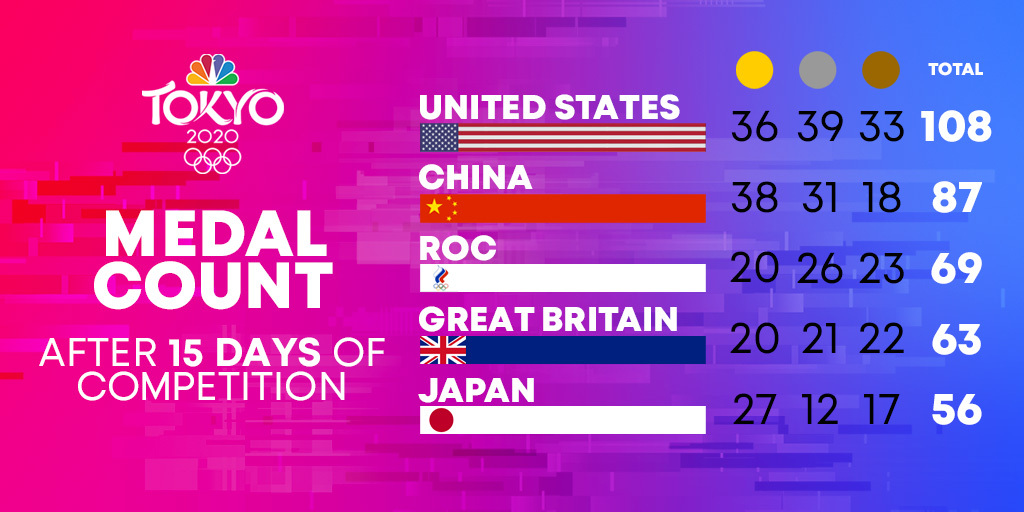 Behind the United States on the medal count leaderboard is China with 87, including 38 gold — just two more than the U.S. China is followed by the Russian Olympic Committee with 69 medals, Great Britain with 63 and Japan with 56.

Galen Rupp Has Eyes on Another Men’s Marathon Medal

American runner Galen Rupp will compete for a medal in the men’s marathon on Saturday evening. Rupp, a three-time Olympian, won the marathon bronze medal at the 2016 Rio Olympics and the 10K silver at the 2012 London Olympics.

Rupp’s main competition is world record-holder Eliud Kipchoge of Kenya, who will try to become only the third man to win back-to-back gold medals in the marathon.

Team USA will compete for its seventh-consecutive gold medal in women’s basketball on Saturday night.

The U.S. women’s basketball team has not lost an Olympic game since 1992.

The United States’ game against Japan begins at 10:30 p.m. ET on Saturday.

The United States will face Brazil in the gold medal match of the women’s indoor volleyball tournament.

This is the third time in the past four Olympics that the U.S. and Brazil will meet for the title, so Team USA certainly has revenge on its mind.