At every Olympics, alongside the thrilling finishes and showcases of athletic prowess, there are moments that demonstrate sportsmanship, camaraderie and unity. The Tokyo Olympics were no exception, especially given that so many of the athletes faced additional adversity in the year that the Games were postponed because of COVID-19.

Inspired by these moments of Olympic spirit, NBCUniversal Local motion graphics designers and multimedia artists made their own renditions in the style of iconic artists

Naomi Osaka, the Japanese tennis star, was chosen to light the Olympic cauldron at the Opening Ceremony. She had taken a two-month break from competition to focus on her mental health, but was determined to return for the Tokyo Olympics. Despite her unexpected loss in the third round of the women’s tennis tournament, she demonstrated her willpower and commitment to the country she represents.

Andrew Williams created this manga of Osaka in the Japanese Sumi-e style. 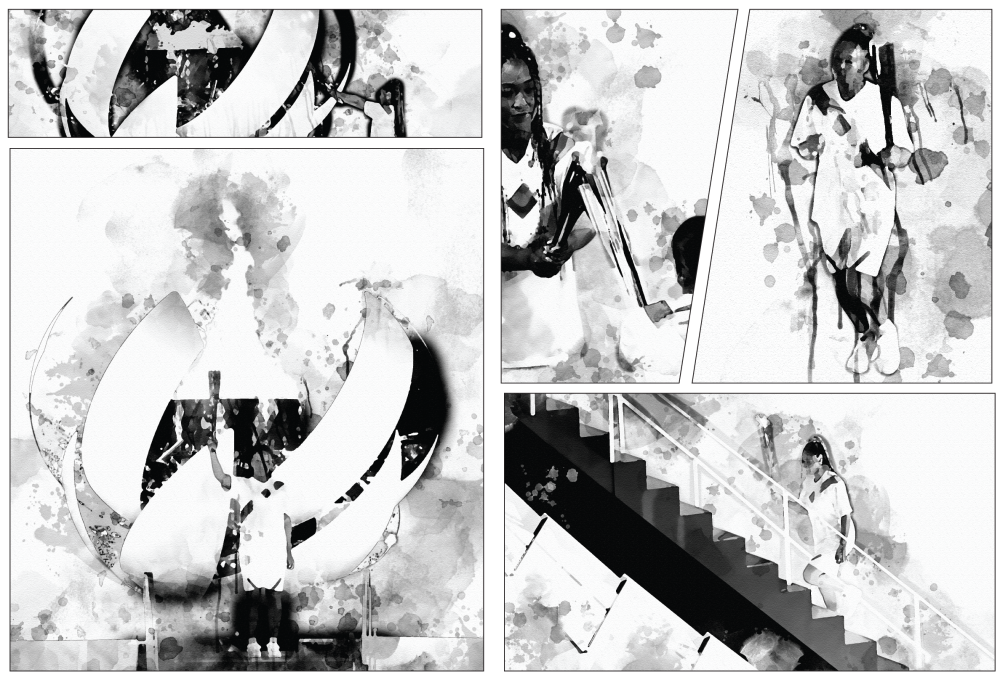 Osaka’s commitment to her mental health helped give space for other athletes to realize the importance of their mindset. When Simone Biles lost her air awareness during her vault in the women’s gymnastics team competition, she immediately knew she could injure herself if she continued. She withdrew to protect herself, but she told her teammates that she would be their biggest cheerleader. Encouraged by Biles’ support, Suni Lee, Jordan Chiles and Grace McCallum stepped up to win silver in the team competition. 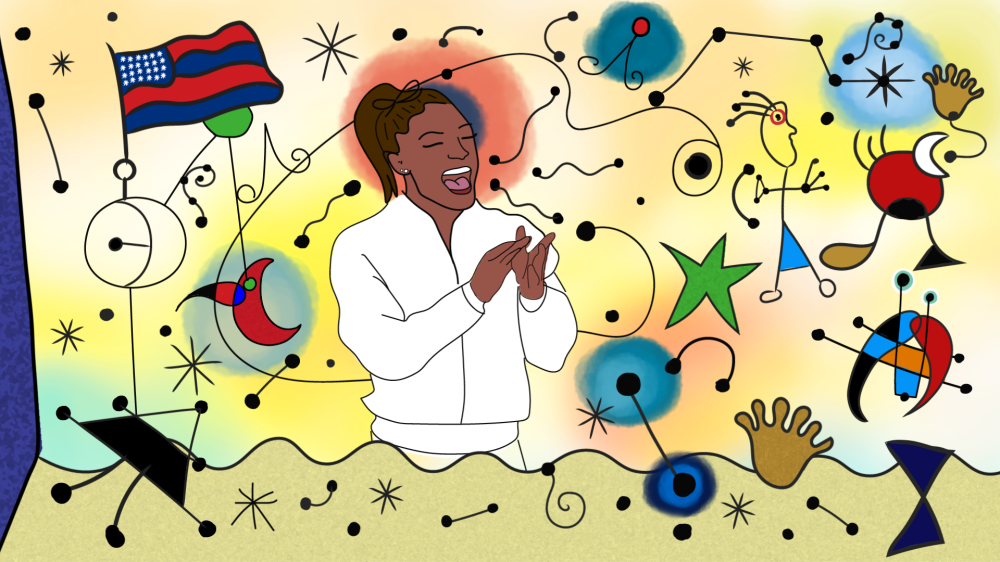 Tamyra Mensah-Stock of the U.S. became the first Black woman to win a gold medal in wrestling with her victory in the freestyle 68kg division. Her joyful interview afterward, in which she spoke about how “wrestling has encouraged me to be who I am,” demonstrated the importance of representation.

Erin Pannel’s art of Mensah-Stock is in the style of Neo-expressionist artist Jean Michel Basquiat. 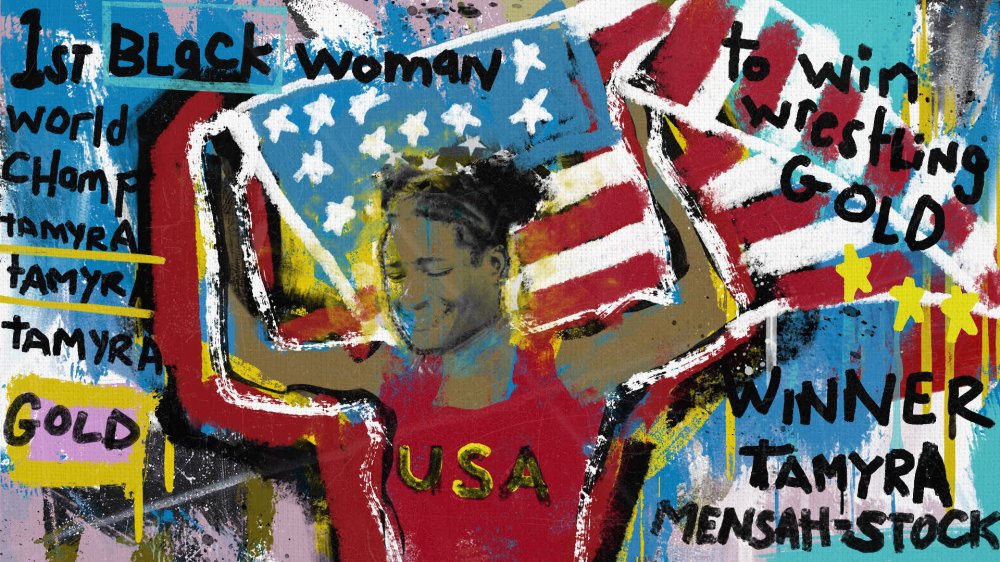 In one of the men’s 800m semifinals, two runners showed how to persevere and work together even when things aren’t going your way. Isaiah Jewett of the U.S. and Nijel Amos of Botswana fell to the track during their race but helped each other up and finished the race together. Referees ruled that Jewett had caused the crash and advanced Amos to the final, where he finished eighth. But Jewett had no hard feelings, saying that he wanted to “be a hero at the end of the day … standing up and showing good character.”

Tony Pierce used the style of Dutch post-impressionist artist Vincent van Gogh to render this image of Jewett and Amos. 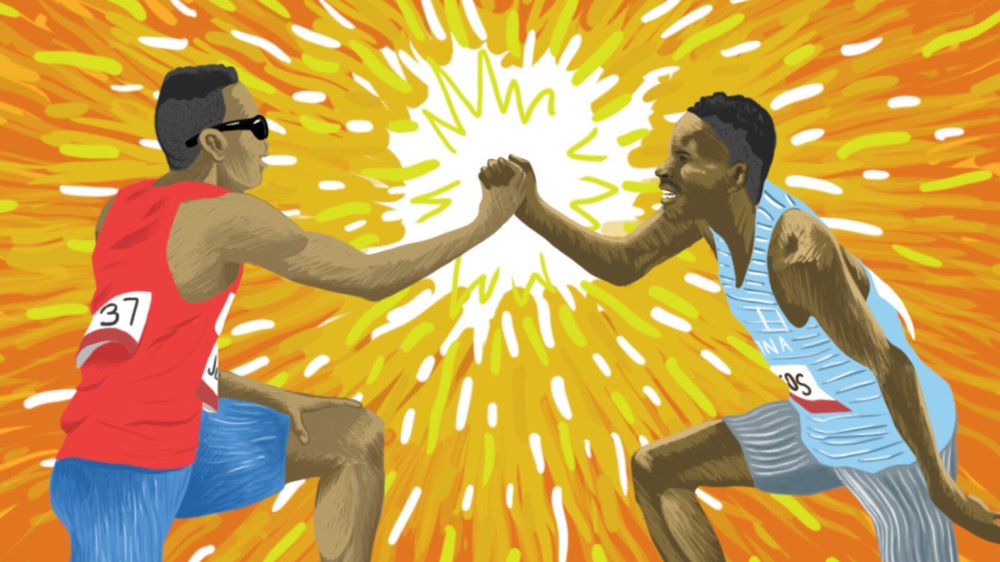 In men’s high jump, Qatar’s Mutaz Essa Barshim and Italy’s Gianmarco Tamberi – who are good friends on and off the track – had both cleared 2.37m, and neither could clear 2.39m in their first three tries. The referee was speaking to them to arrange a jump-off, but Barshim asked, “Can we have two golds?” Tamberi instantly agreed, and the two were ecstatic in celebration of their shared victory.

Amy O’Kruk created this collage of Barshim and Tamberi in the style of German artist Kurt Schwitters. 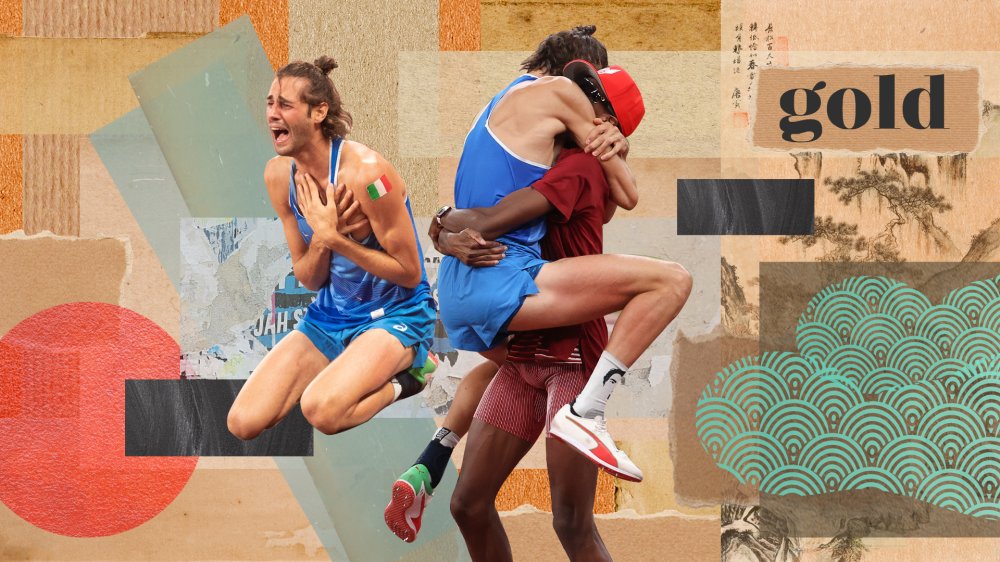