5 to Watch: USWNT Misses Chance for Gold, US Volleyball Back on Winning Track

The United State’s Women’s national soccer team will be playing for bronze after a tough loss as athletes with ties to Pennsylvania and New Jersey made their mark on the Tokyo Olympics.

The team advanced against the Netherlands, but just barely, winning on penalty kicks. They lost Monday to a tough Canadian team 1-0.

On the track, New Jersey’s own Sydney McLaughlin has the world record in the 400m hurdles. She’ll be looking to cement her status after qualifying for the gold medal race. On the field, Delaware-born Valarie Allman took home gold in women’s discuss.

In women’s volleyball, Penn State alumnae Micha Hancock, Haleigh Washington and Megan Courtney bounced back after the team lost to the Russian Olympic Committee, in the process also losing one of its star players to injury.

Take a look below at some of the storylines to watch as the Tokyo Olympics continue.

USWNT loses to Canada in women’s soccer semifinal, will play for bronze

The United States women’s soccer team were the better squad in its semifinals match, but it was Canada that came out on top on the scoreboard 1-0.

Canada’s Jessica Fleming capitalized on a penalty kick opportunity to give Canada the win over the U.S.

After a video review, it was determined Fleming was fouled in the box by Tierna Davidson and was given the chance to score the first goal of the game. Goalkeeper Adrianna Franch read it the right way, but the shot was too far away from her outstretched arms to save.

Carli Lloyd was inches away from tying the game, as she rang the crossbar in the 85th minute with a header. But the U.S. could not find the equalizer as Canada defeated the Americans for the first time in over 20 years.

Franch entered the game after Alyssa Naeher exited the match in the first half. Naeher appeared to land awkwardly on her right leg going up to deflect the ball off of a Canada corner kick.

The United States will now play for bronze in the loser of the Sweden-Australia match. It very well could mean the last game wearing the red, white and blue for veterans like Megan Rapinoe and Lloyd.

American Keni Harrison won her first Olympic medal after placing second in the 100m hurdles with a time of 12.52 on Sunday, claiming silver for Team USA.

Jasmine Camacho-Quinn, the Olympic record holder, won the gold medal in the women’s 100m hurdles running for Puerto Rico. Her time of 12.37 was fast enough to put her on top of the podium.

Camacho-Quinn, who set the Olympic record in the semifinals with a time of 12.26, is the sister of Chicago Bears linebacker Robert Quinn. She ran for Puerto Rico, where their mother was born.

The International Olympic Committee considers Puerto Rico a country for purposes of competition in the Olympics. This was Puerto Rico’s first medal of the Tokyo Games and only the 10th medal ever for the Caribbean island.

Megan Tapper won the first medal ever in the event for Jamaica with the bronze.

The American women swept the podium in the event in Rio, and in Tokyo, Harrison was trying to become the first world record holder to win the gold medal in the 100m hurdles since 1988. The achievement was last accomplished by Yordanka Donkova of Bulgaria at the Seoul Olympics, according to Reuters.

Team USA’s JuVaughn Harrison finished fifth in men’s long jump in his Olympic debut with a jump of 8.15m.

Miltiádis Tentóglou of Greece won gold with a jump of 8.41m with his 6th and final attempt.

This will be Greece’s first medal in men’s long jump.

Echevarría posted a jump of 8.41m in his third attempt, but was unable to post a final jump due to injury.

The United States won gold at the 2016 Rio Games but will not take the podium in Tokyo.

Purrier St. Pierre was the first member of Team USA to qualify, posting a time of 4:05.34 in Heat 2. Maclean closed out Heat 3 where she finished fifth overall with a time of 4:02.40.

Cory McGee also qualified for the next round after finishing 16th overall with a time of 4:05.15.

The United States looks to win its first-ever gold medal in the event.

The semifinals take place on Wednesday at 6 a.m. ET, followed by the final on Friday at 6:50 a.m. ET.

Battle was the first member of Team USA to qualify, posting a time of 22.54 in Heat 3 in her Olympic debut. Thomas finished in second place overall with a time of 22.20 in Heat 4.

Winkler, who finished 18th in hammer throw at the 2016 Rio Games, automatically qualified for the next round, posting a distance of 78.81m in Group B. He finished with the second-best overall distance.

American Alex Young did not qualify, finishing in 16th place with a distance 75.09m in his Olympic debut.

Allman battled not only a field of world-class discus throwers but also wet weather to win gold. Her first throw of 68.98m would stand.

The competition was delayed Monday night in Tokyo (Monday morning on the East Coast) due to rain that caused slippery conditions.

McLaughlin won her heat in the pouring rain with a time of 53.03 seconds.

McLaughlin easily crossed the finish line ahead of the competition in her Round 1 heat Friday with a time of 54.65 seconds.

Reigning champion Dalilah Muhammad also clinched a spot in the final and will defend her title from the 2016 Rio Olympics. Muhammad crossed the finish line first in the first semifinal heat with a time of 53.30 seconds. She ran a 54.97 time in Round 1.

American Anna Cockrell also qualified with a time of 54.17 seconds to give the U.S. three women in the final.

The U.S. women’s basketball team continued Olympic dominance in Tokyo, extending a 52-game win streak that dates back to the 1992 Barcelona Games by beating France 93-82.

The U.S. got off to a slow start in the first quarter and was down 22-19 at the end of the first.However, Team USA was able to go on a run and come back to take the lead at halftime, 50-44.

Jade Carey was the lone American competitor in floor exercise and she took advantage of the opportunity.

Jade Carey of the U.S. won the gold medal in the women’s floor exercise. Medals were also awarded in men’s rings and men’s vault.

After finishing fourth on the rings in the 2016 Olympics, China’s Liu Yang earned his first gold medal in Tokyo. You Hao earned the silver medal to give China the top two spots, while Greece’s Eleftherios Petrounias, who won gold in 2016, took the bronze.

South Korea’s Shin Jea-hwan won the gold medal after a tiebreaker with Russian Olympic Committee’s Denis Abliazin. The average score on their vaults both came to 14.833, but the tiebreaker went to Jea-hwan because he had the highest individual vault score of their four total attempts (two each). Abliazin was awarded the silver medal.

Armenia’s Artur Davtyan claimed the bronze for the first gymnastics medal in the nation’s history.

But this time, they were able to overcome it.

After setter Jordyn Poulter exited with an apparent ankle injury, the U.S. battled back to beat Italy 3-2 to close out the preliminary round.

The teams split the first two sets, with Italy taking the first 25-21 and the U.S. winning the second 25-16. Early in the third set, Poulter suffered an injury when she landed awkwardly on a block attempt. She had to be helped off the floor, and the United States would drop the set in a thriller, 27-25.

But Team USA refused to go away, winning the fourth set in impressive fashion, 25-16. They then sealed the comeback win over Italy with a 15-12 effort in the fifth set.

Greece charged out of the gate in Monday’s final preliminary match victory against the United States, with Dimitri Skoumpakis scoring less than a minute into the match. The Europeans’ aggressive play had them up 4-1 by the end of the first quarter — and clearly illustrated why the team had yet to lose at the 2020 Tokyo Olympics, with a record of three wins and one draw.

Following their clash with the United States, make that four wins. Greece all but destroyed Team USA, clinching the top Group A spot in the process.

Though the United States would remain fourth in Group A no matter what — having already secured a spot in the quarterfinals — the team suffered an especially tough loss ahead of their first knockout round match.

After that first quarter blowout, the Americans allowed Greece to score twice more during the second quarter. Team USA’s Benjamin Stevenson and Alex Obert each put up a point in an attempt to stop the bleeding, the score 6-3 at the halfway point. As the third quarter began, the United States bolstered their defense and crawled back up the scoreboard with Max Irving’s goal at 5:55.

Next up for Team USA: a quarterfinal match against either Spain or Croatia. 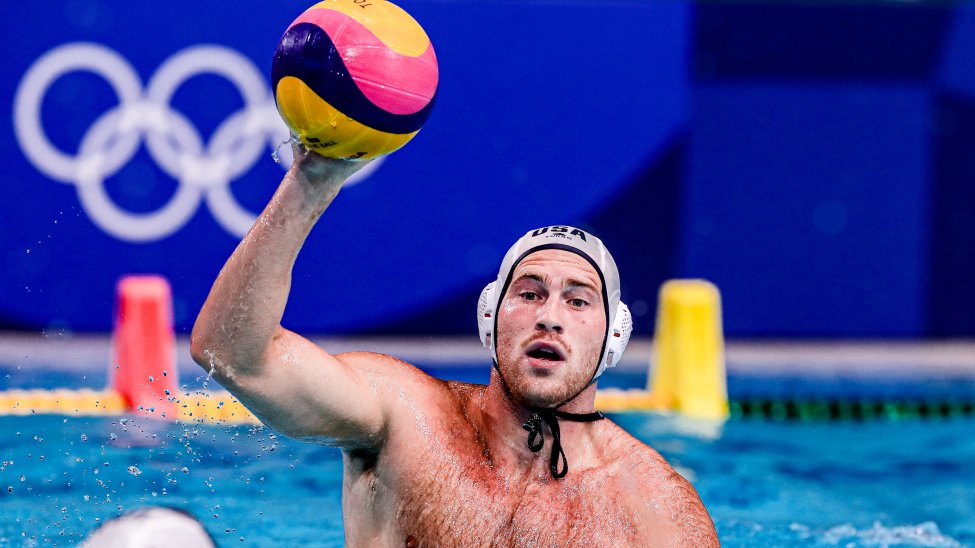