The United States held a solid lead on the medal count board on Day 14 of the Tokyo Olympics.

It was an exciting day for the women of Team USA: Nelly Korda has the lead in the women’s golf tournament, beach volleyball duo April Ross and Alix Klineman won the gold medal, and both the women’s basketball and indoor volleyball teams advanced to gold medal matches. Allyson Felix also became the most decorated female track and field athlete with her 400m bronze.

Scroll down for live updates of everything happening in Tokyo on Day 14 of the Games:

Felix Runs To Bronze in 400m

Allyson Felix won her 10th Olympic medal with a third-place finish in the 400m. She finished in 49.46 behind defending gold medalist Shaunae Miller-Uibo of the Bahamas and the Dominican Republic’s Marileidy Paulino.

With this medal, Felix becomes the most decorated female track and field athlete in Olympic history.

American wrestler Gable Steveson was seconds away from losing to Georgia’s Geno Petriashvili. But a literal last-second push saw Steveson secure a two-point takedown as the clock ticked down to zero to come from behind and win the gold.

With under 15 seconds left, Steveson was down 8-5 after giving up six straight points to Petriashvili. The American got a takedown to cut it to a one-point match before the final takedown right before the buzzer to go up 9-8. The failed challenge attempt from Petriashvili’s corner upped the final score to 10-8.

It is the third wrestling gold medal for the U.S. in Tokyo and brings their wrestling medal total to seven, which leads all countries.

Read more from Day 14 in Tokyo:

Canada knocked off Sweden in the first gold medal match ever decided by a shootout. In a 2-1 victory, Canada earned their first ever Olympic gold medal.

The United States came in second in the 4x100m relay event, finishing behind Jamaica to win the silver medal.

The team of Javianne Oliver, Jeanna Prandini, Teahna Daniels and Gabby Thomas ended with a time of 41.45.

The Jamaican team crossed the finish line first with a time of 41.02, the first time the country has won gold in the event since 2004.

Great Britain won the bronze with a time of 41.88.

Italy narrowly won the gold medal in the men’s 4x100m relay, getting by Great Britain for its first ever gold in the event.

The U.S. men’s 4x100m relay team failed to qualify for the finals. It finished with a time of 38.10, which was two-hundredths of a second short of qualifying for the final event. The performance grabbed the attention of U.S. track legend Carl Lewis, who called the team out on Twitter.

The Netherlands reclaimed their title as Olympic champions in women’s field hockey, beating Argentina for gold in Tokyo. This is the fourth Olympic gold medal for the Dutch since their first Olympic appearance in 1984. They won back-to-back gold medals in 2008 and 2012 before winning silver in 2016.

The Dutch capitalized on three penalty corners in the second half to take a 3-0 lead over Argentina. Argentina was able to convert on a penalty corner at the end of the first half but was otherwise held scoreless and will go home with the silver medal.

In the bronze medal match, 2016 gold medalists Great Britain beat India to return to the Olympic podium. India fought back from down 2-0 to take a 3-2 lead at the half, but Great Britain scored twice in the second half. After finishing 12th at the Rio Olympics and struggling on the international stage, a fourth place finish and tight match with the defending gold medalists is commendable Olympic performance for India.

The United States men’s 4x400m relay team is moving onto the finals, finishing qualifiers with the best time of the field.

US Women’s Basketball Beats Serbia, Will Play for Gold

American wrestler Kyle Synder won his semifinal match and moved on for a chance at gold in the men’s freestyle 97kg wrestling event.

Snyder defeated Turkey’s Suleyman Karadeniz 5-0 in the semifinal match. The defending gold medalist previously took down Canadian Jordan Steen 12-2 in the Round of 16 and Abraham Conyedo of Italy 6-0 in the quarterfinals.

The graduate of Ohio State University will face ROC’s Abdulrashid Sadulaev for the gold medal. Sadulaev won gold at the 86kg weight class in 2016.

The United States women’s indoor volleyball team will play in the gold medal match after a semifinal win over Serbia early Friday morning. Team USA beat Serbia in straight sets, winning the first frame 25-19, the second 25-15 and the third 25-23.

The U.S. will face the winner of Brazil-Korea’s semifinal game.

American divers Brandon Loschiavo and Jordan Windle finished the top 18 of qualifiers to advance to the semifinals of the men’s 10m platform diving.

China’s duo of Yang Jian and Cao Yuan held the top two spots of the prelims, while ROC’s Aleksandr Bondar was third.

American Keyshawn Davis will fight for a gold medal in the men’s lightweight division on Sunday.

Davis defeated Hovhannes Bachkov of Armenia in the semifinal match Friday to reach the gold medal match. He along with super heavyweight Richard Torrez Jr. will attempt to break a 17-year boxing gold medal drought for Team USA.

The last boxer to win gold in any division for the U.S. was Andre Ward in 2004.

Davis has been on a magical run so far, knocking out No. 1 seed Sofaine Oumiha of France in the preliminary round last Saturday.

He will face the winner of the semifinal match between Andy Cruz of Cuba and Harry Garside of Australia on Sunday at 1:15 a.m. ET.

US Women’s Basketball Up Big at Half in Semifinals

The U.S. women’s basketball team is one half away from the gold medal game, leading Serbia 41-23 at halftime of the semifinal matchup.

Brittney Griner and Sue Bird each had eight points and A’ja Wilson added seven to lead the United States.

The U.S. responded after Serbia pulled within single digits late in the second quarter, closing the quarter on an 11-2 run.

Team USA shot 53 percent in the first half. Serbia was held to 28 percent shooting, going just 1-for-11 from deep in the half.

Nelly Korda Remains in the Lead After Round 3

Korda finished Round 3 at -15, while India’s Aditi Ashok remains in second place at -12. There is a four-way tie for bronze at -10 between Australia’s Lydia Ko and Hannah Green, Denmark’s Emily Kristine Pederson and Japan’s Mone Inami.

Team USA Volleyball Up 2-0 vs. Serbia in Semifinals

In the semifinal match against Serbia, the United States women’s indoor volleyball team won the first two sets to take the lead. The U.S. won the first frame 25-19 and the second 25-15.

Annie Drews leads Team USA with 11 points, while Michelle Bartsch-Hackley and Jordan Larson each have 8.

Jordan Thompson, the United States’ leading point-scorer in Tokyo, injured her ankle in pool play. Thompson started the match on the bench, but is dressed to play. Jordyn Poulter, who also suffered an ankle injury during pool play, returned to start the semifinal game.

Ross, 39, makes history as the oldest woman to win an Olympic beach volleyball medal as she adds a gold to her silver from London and bronze from Rio. This is Klineman’s first Olympic medal.

The “A Team” now joins Misty May-Treanor and Kerri Walsh Jennings as the second duo in American women’s beach volleyball history to go undefeated in a single Olympics.

Simone Biles Greeted by Welcoming Party Upon Arrival in Houston

American gymnast Simone Biles arrived home in Houston on Thursday from the Tokyo Olympics, where she won two medals despite withdrawing from several events.

When Biles walked out of the airport with teammate Jordan Chiles and their coach, Cecile Canqueteau-Landi, a crowd started a “USA! USA!” chant. As the gathered fans cheered and waved American flags, Biles was seen hugging her mother, Nellie, and father, Ron.

Klineman and Ross are now just one set victory away from winning the gold medal in Tokyo.

As we start the home stretch of the 2020 Tokyo Olympics, the United States leads with 91 medals entering Day 14 of competition. 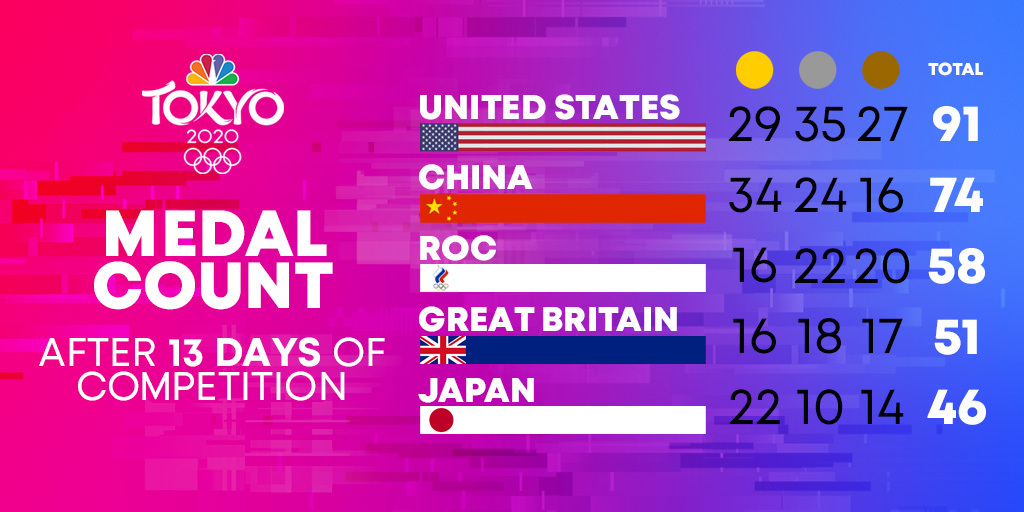 Behind the U.S. sits China with 74 medals, including a Games-high 34 gold. Following China is the Russian Olympic Committee with 58 medals, Great Britain with 51 and Japan with 46.

The women’s golf tournament is set to resume with Round 3 on Thursday evening.

American Nelly Korda has a four-stroke lead after a spectacular Round 2. The No. 1 ranked golfer in the world had nine birdies and an eagle on her way to shooting nine under par, and now sits atop the leaderboard at –13 through 36 holes.

Behind her tied for second at –9 are Denmark’s Emily Pedersen and Nanna Koerstz Madsen, as well as India’s Aditi Ashok. Americans Jessica Korda and Danielle Kang are tied for 11th at 4-under par.

The “A Team” hasn’t lost a match in Tokyo, and could join Misty May-Treanor and Kerri Walsh Jennings as the second duo in American women’s beach volleyball history to go undefeated in a single Olympics.

Ross, a two-time Olympic medalist, will look to add a gold to her hardware collection after winning a silver in London and bronze in Rio. Regardless of the outcome, Ross, 39, will surpass Walsh Jennings as the oldest woman to win an Olympic beach volleyball medal.

After Klineman made the switch from indoor to beach volleyball in 2017, this will be her first Olympic medal.